Supplied by TECC (The Electronic Cigarette Company) for review.
https://www.theelectroniccigarette.co.uk/smok-vvow-disposable-e-cig
£4.00 each

Smok are the latest big manufacturer to jump on the disposables bandwagon with the VVOW nic salt range. We test six of the current range of eight flavours and check out how they taste and how long they last. 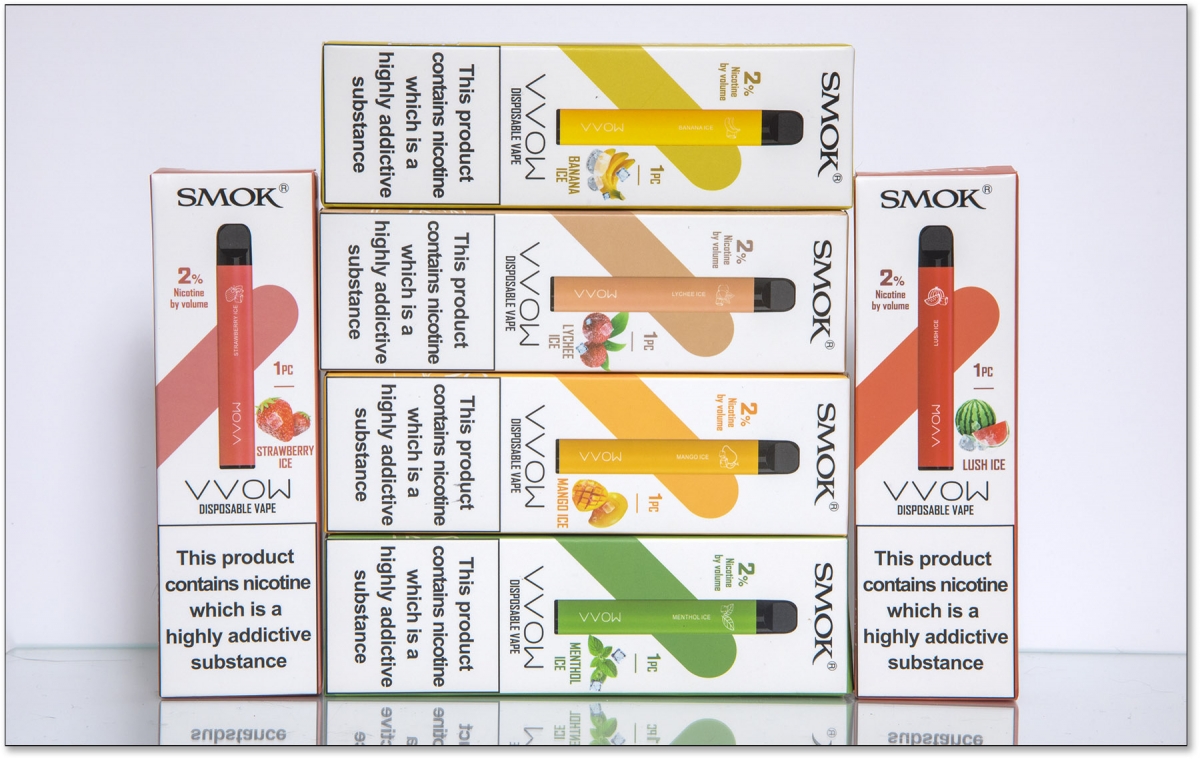 The current flavours available are:

For some reason it appears the vast majority of disposables go with the ‘Ice’ element in the flavours. Prior to trying disposables, I never really liked ice in my juices as it was often overdone and more like menthol than anything, but things have moved on and the ice element is more subtle and enhances the flavour nicely and you also get a better aftertaste.

There’s a fair bit of controversy about the whole disposable concept due to the environmental waste produced by these devices. There’s no getting away from this, and at the moment there aren’t many options of how to recycle these devices responsibly but it’s clear that efforts are being made to find a way to address the issue. I either harvest the battery for my electronics hobby or stash them to one side until a recycle method becomes available. 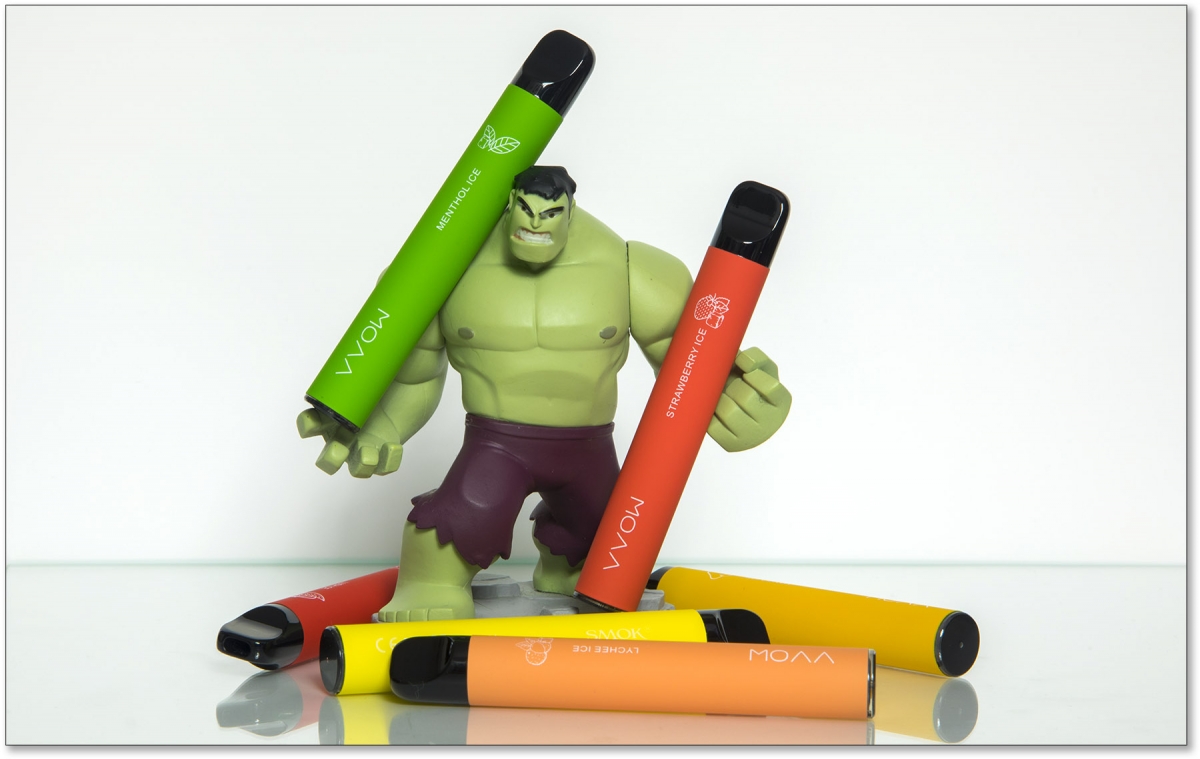 I won’t go too deeply into the whole debate, if you do feel the need to discuss the topic then you can pop onto the forum but please respect other people’s choices.

Though in principle I don’t agree with the waste produced by these devices, I can appreciate the value for some folks, especially for anyone struggling to quit smoking tobacco and find that vaping is either confusing or overwhelming. Disposables require no vaping knowledge and they are instant right out of the packet, if you know how to smoke a cigarette then you know how to vape on one of these devices, and the 20mg nicotine is high enough to satisfy any cravings. 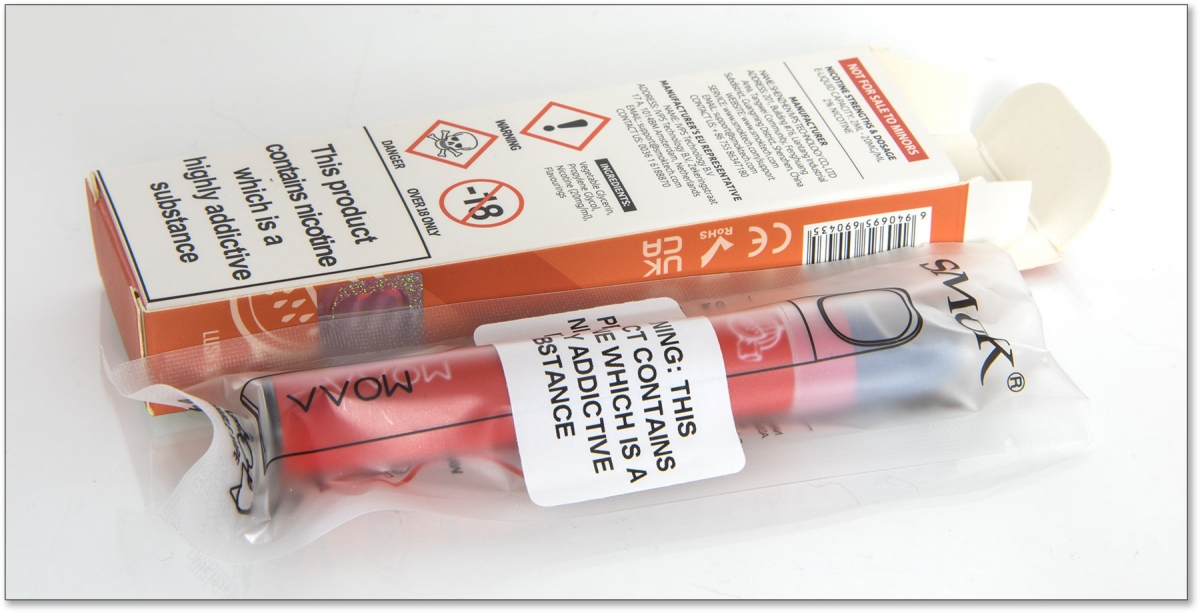 The Smok VVOW (pronounced V-vow?) comes hygienically packaged with a tear to open plastic bag inside the box, safety standards information is printed on the box and on the inner bage.

Once open, there is a peel off sticker at the base and a silicone condom over the tip (oooh-er!), once removed it is instantly ready to vape. There’s no buttons or anything to press; you vape it like you would smoke a cigarette as it has auto-draw built in, simply draw into your mouth, inhale and hold for a couple of seconds then exhale.

The electronics in the device are very simple and fool proof, there’s a little blue LED at the base which lights up as you vape. The only thing worth noting is the vape will only last as long as the battery and the blue LED will flash once it has run out, usually the battery will die long before the juice runs out so you shouldn’t get any dry hits (burning cotton taste). The VVOW has a 500mAh battery which is just about right for the estimated 500 puffs. Although Smok estimate 600 puffs, this number will always be overestimated so expect less, generally this is the maximum and how long you draw each puff will alter the puff count. Simply put, the longer the draw, then the more power is required. When testing these I find a two second draw is ample and easier to keep track of.

So onto how they tasted and performed…..

To include the battery performance within the flavours wouldn’t be fair as no two devices will be exactly the same due to a couple of variable factors such as the battery charge date and exact ohms of the coil.

On average these devices were pretty close to my guesstimate 500 puff, a couple lasted even longer but none lasted 600 puffs. I am going to stick with 450-500 two second puffs, but you could likely achieve the 600 puffs with much shorter draws.

The vape itself was very satisfying, warm and the airflow was tight and similar to a cigarette producing a very satisfying MTL vape. MTL means ‘Mouth to Lung’ which basically means the same style as smoking: draw vapour into your mouth – inhale and hold then exhale.

Obviously this tasted of banana, but more like a cross between chews and a maccy d’s milkshake. The ice element carried the flavour well on the inhale, and the exhale left a nice aftertaste. I enjoyed this flavour a lot but it’s more of a treat choice as it can get a bit sickly as an everyday vape.

Mango is one of my favourite vape flavours as it has a really punchy fruit flavour, and Smok have got it just right. The ice kick makes it even nicer as it tones it down just a little to make it a better all day vape choice. Similar to the fruit, it is quite sweet but again the ice tones it down, and the aftertaste is proper nice.

I’m not sure why the watermelon isn’t in the title as it is clearly the dominant flavour, perhaps people think watermelons aren’t flavourful? Either way, this had a strong watermelon taste though the ice seemed a bit stronger on this one. The flavour was stronger on the inhale, but the aftertaste was a bit too menthol for my tastes.

No prizes for guessing what this tasted like. Similar to the banana, this had a milkshake vibe to it, sweet but not sickly, and the ice helped carry the flavour and left a pleasant aftertaste. I really enjoyed this one and it is definitely one I would buy again but as a treat rather than an everyday vape.

Lychee is a really difficult flavour to describe, I’ve almost never eaten the actual fruit but it’s one of the flavours in e-liquid that I enjoy, and it tastes even nicer with the ice base. The taste reminds me of those ‘fruit salad’ chews, but more tropical if that makes any sense? It just works as a sweet fruit vape flavour, a bit more punchy than mango and not quite as sweet, it might be one to try to see if you like it first. I definitely like it and it would be another repeat buy as a treat.

Generally I don’t do menthol, even back in my smoking days I would always turn away menthol ciggies unless I was desperate, so I wasn’t expecting to enjoy this one. Surprisingly, it was rather nice as there was a sweetness to it that was similar to spearmint chewing gum. Better still, the flavour lasts long in the aftertaste. Rare for me, I actually got through this one pretty quick, and I would buy this one again.

Though I only had the six flavours to test, I did enjoy all of them which is pretty rare. A couple might be an acquired taste but worth trying out as some of them surprised me. The flavour names are pretty accurate so you should find one to suit your taste. The battery life was just about right as long as you bear in mind that the official estimate of 600 puffs is on the high side and short puffs, I was getting between 450-500 puffs and none of them fell short of that.

The beauty of vaping on devices like this over smoking is that you only vape as much or little as you need, a couple of puffs now and then instead of smoking a whole cigarette for the sake of it, just how much you use it will be a personal choice. For example, if you only vape it to satisfy your cravings with a couple of puffs every thirty mins, then it will obviously last you days, but if you vape for the enjoyment like me, then it will likely last you under a day. Aside from using them to quit smoking, they are also handy for nights out, gigs, holidays etc. If it wasn’t for the environmental waste of these devices, I think I would use them a lot more. 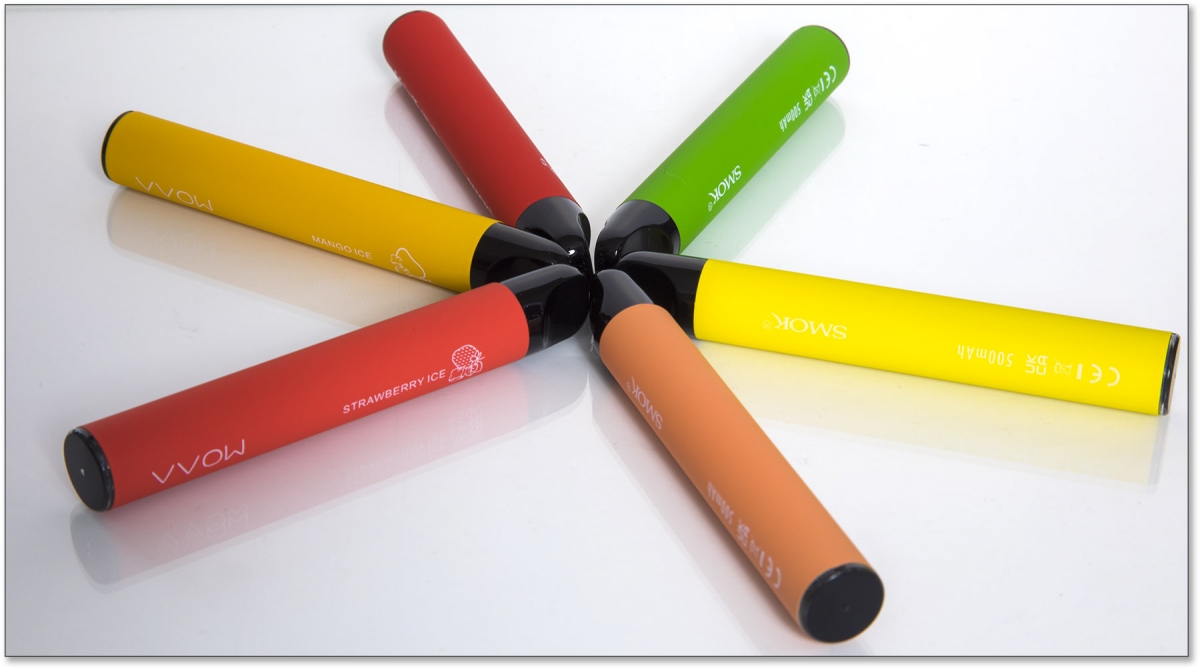 I’m not going to use this review as a platform to debate the pros and cons of disposables, instead I will give a fair and balanced review of the devices purely from a vaping point of view. As an intermediate bridge to ‘proper vaping’, I think these devices are a great choice but I highly recommend moving onto a more sustainable and cost effect way to vape, reusable pods, mod/tank kits etc. and there is a HUGE amount of starter friendly kits made especially for new vapers with little to no vaping knowledge, again the forums will help you move onto something to suit you, just ask (nicely).

Had these been available on the numerous occasions when I first tried to quit smoking, I would have quit much sooner so if they help you to quit then all the better and they will give you a baseline of vaping experience to figure out something that works best for you, TECC has a shedload of choices https://www.theelectroniccigarette.co.uk/ but pop along to the forum if you need some guidance.