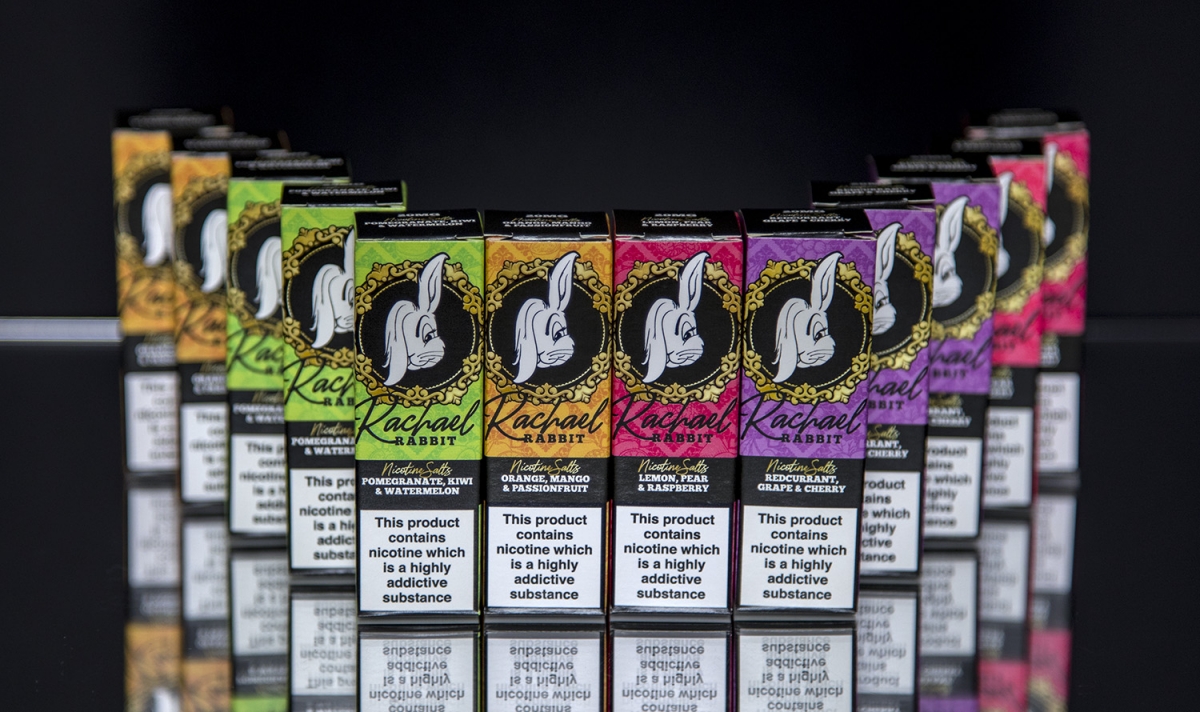 After reviewing the shortfill versions of the Rachael Rabbit range, I was genuinely excited to get my hands on some of their nic salts to review. In my experience, it’s rare to find nic salt flavours to rival freebase shortfills, so do these manage to deliver a similar flavour?

I will cover each flavour, and to test them I used multiple setups for each flavour so I could get a good average. I chose my current favourite setup for nic salt flavour performance.

Jack Rabbit Vapes gave me a fair chance by supplying 3 x 10ml bottles of each which is rare and worked out great as I could use four set ups per flavour at the same time. 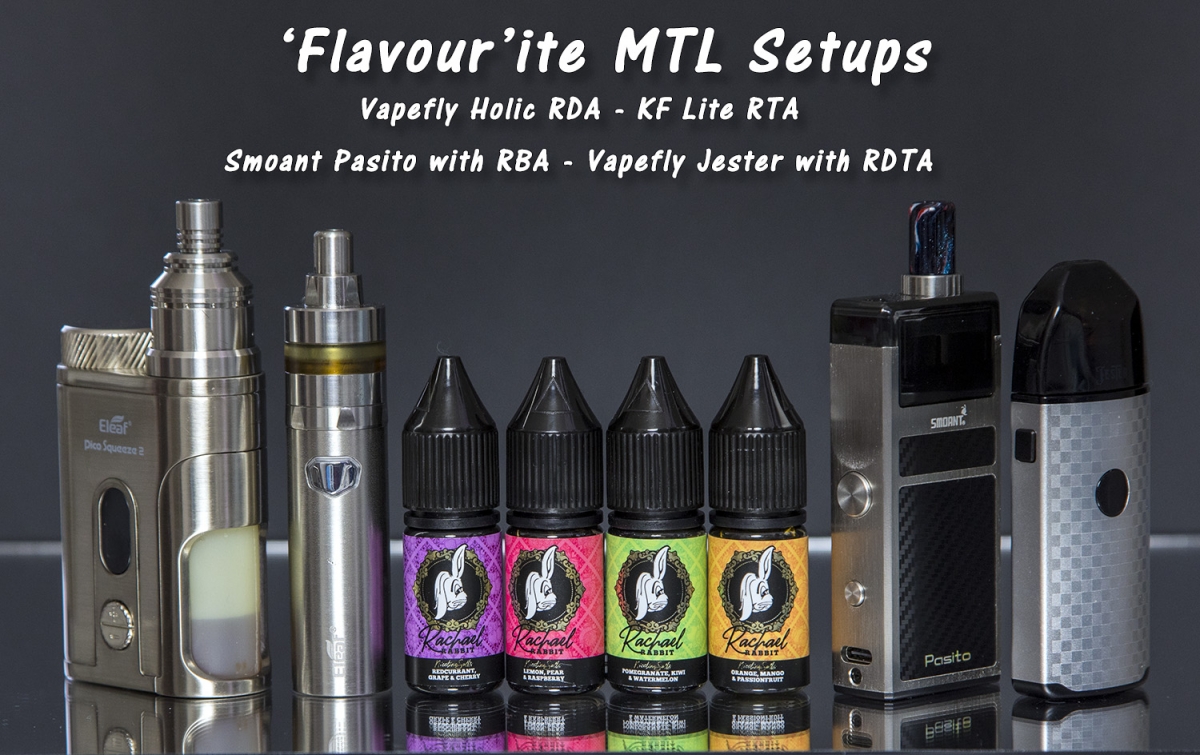 All juices were supplied in 20mg and were well presented in boxes with classy artwork and matching bottles. There’s not much more to say as they are good to vape straight off the bat. I will review them in the order I tried them in.

Full information and mandatory warnings were provided on the box and bottles conforming to regulations, and you can feel safe that the juice comes from a trusted manufacturer and not some ‘back of the shop’ juices you find in some vape stores. 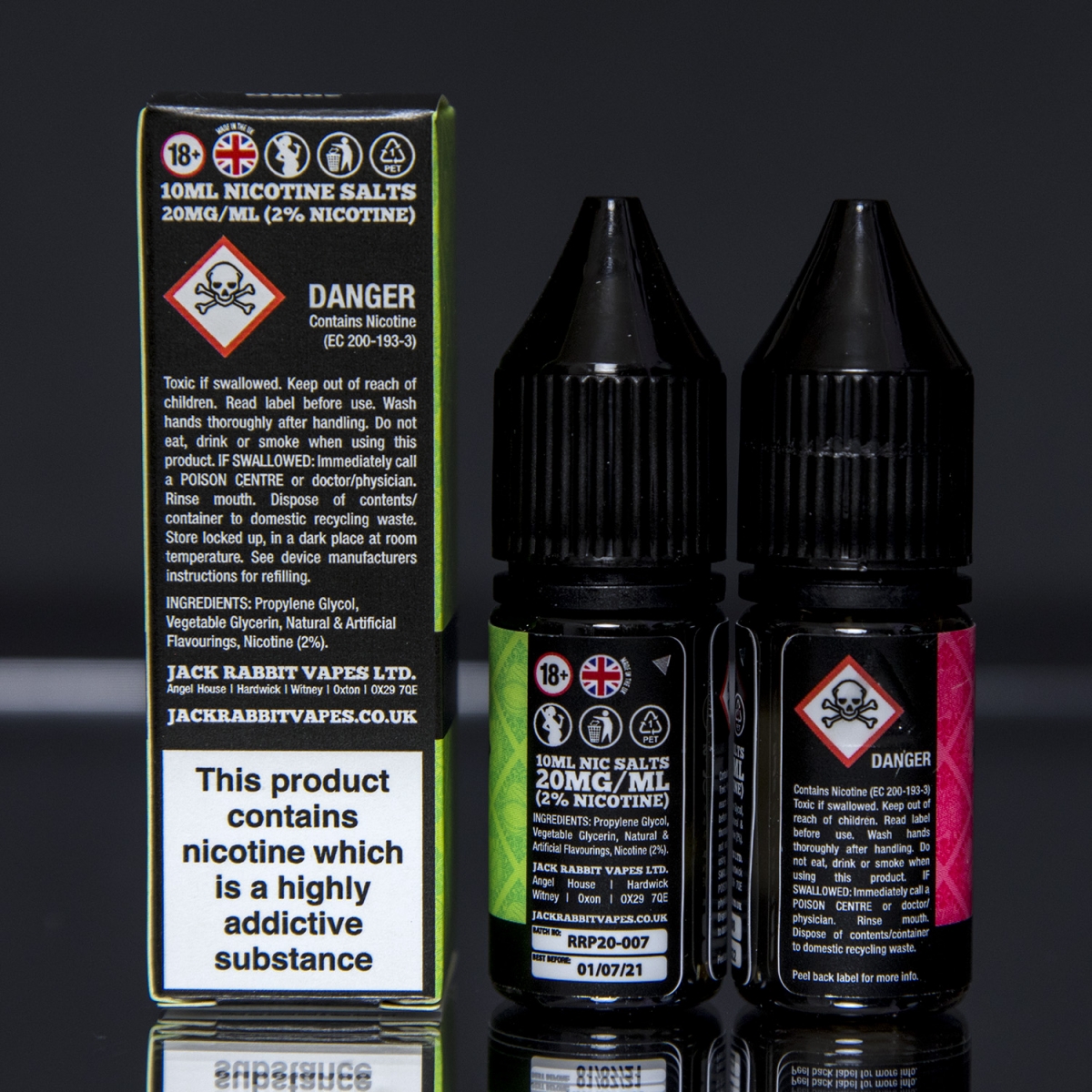 Anybody familiar with Nic Salts will know the vape is smoother without a harsh throat hit and also the nicotine gets into your system faster. They are designed for Mouth To Lung (MTL) vaping primarily, though you can get nic shots to add into shortfills but they make less of a difference. The higher mg ratio reflects this, for example I vape Direct To Lung (DTL) aka cloud chucking devices at 3mg. With MTL you are getting a micro hit compared to DTL, hence the need for higher mg. If you were to DTL nic salts at 20mg, you would likely cough your guts up.

Rather than describe the throat hit on each flavour, I will summarise it here. All the flavours I tried left a satisfying throat hit without any irritation or coughing, just a smooth intense vape.

So onto the actual flavours………… 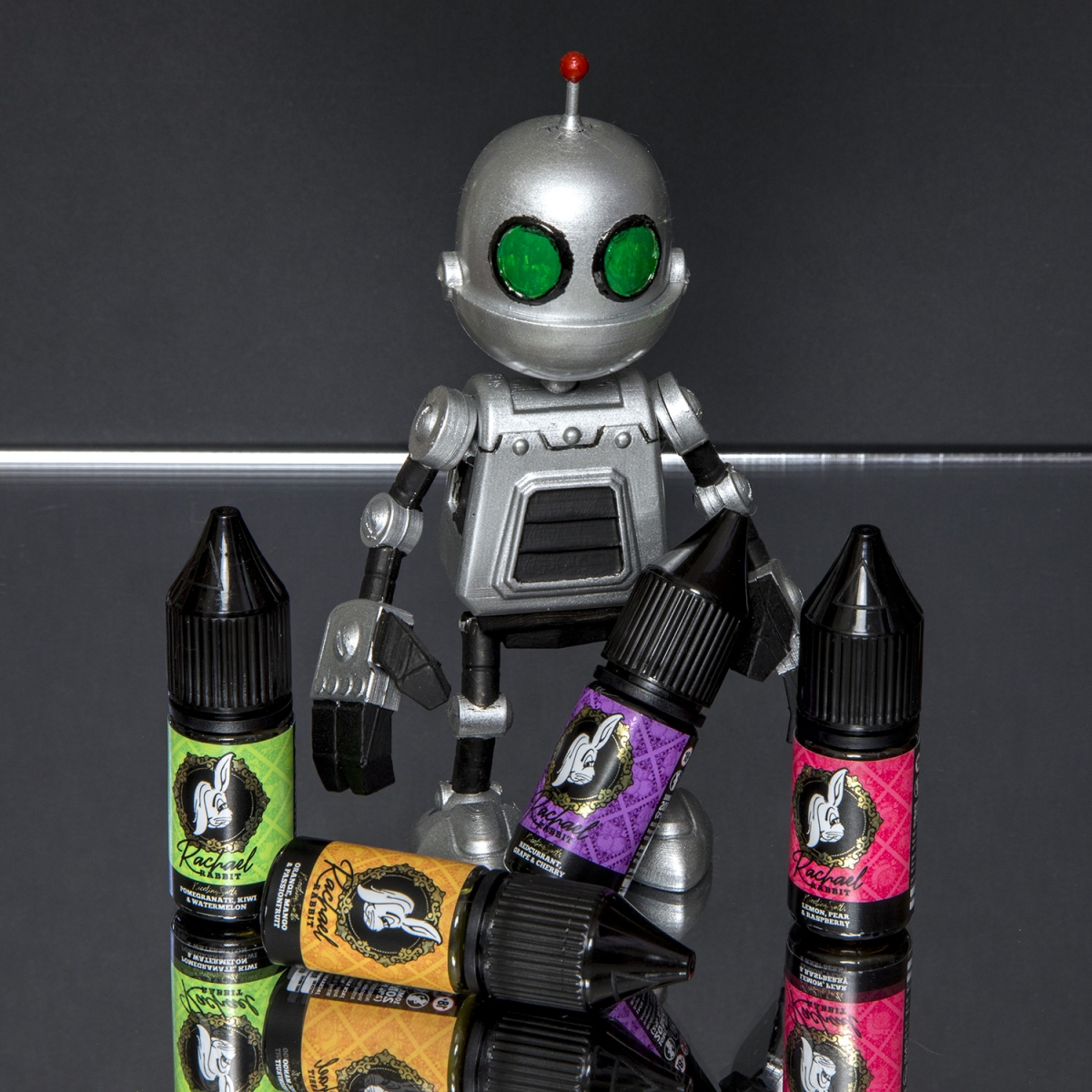 For those that read my previous review of the shortfills, you might notice an almost ‘copy & paste’ description. There’s a reason for this as Jack Rabbit have done an amazing job matching the flavours, the only real difference is in the Mouth To Lung (MTL) sensation and smooth throat hit that Nic Salts give. 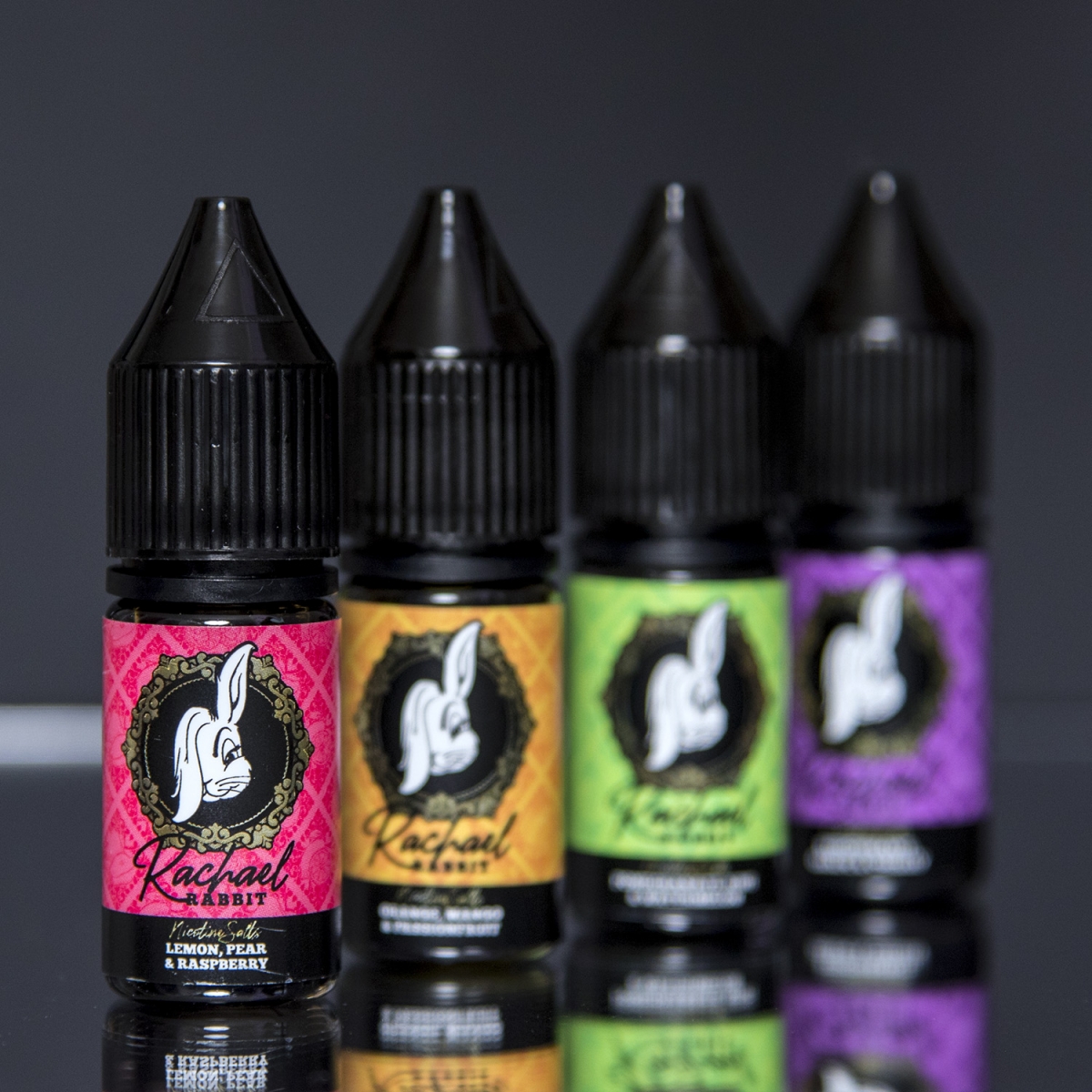 "Tangy raspberry with citrus tones from sweet lemon, are complemented with ripe and juicy pear notes. With koolada to round the flavour profile and produce a truly unique e-liquid."

This was one of my favourites in the shortfills so it was the first one I tried as the flavour combination just works. They are three fruits I wouldn’t have thought of mixing together.

The nic salts version is absolutely fantastic for flavour. I have tried so many nic salts and it’s a minefield trying to find decent flavours, many don’t match their description but this one does exactly what it says on the tin/bottle. If I was blindfolded, I could tell the flavours. None seem over dominant, I actually prefer this over the already superb shortfill and it is one of the best Nic Salts I have tried. I should have saved this for last as it set a high standard for the rest to follow.

Surprisingly, it performed almost the same in each setup though adding a pinch of power to the variable wattage/voltage devices released even more flavour, so it’s great for pods and MTL attys

Copy & Paste time as my rating matched the shorfill so I was a little saddened when I squeezed the last few ml out which says it all. 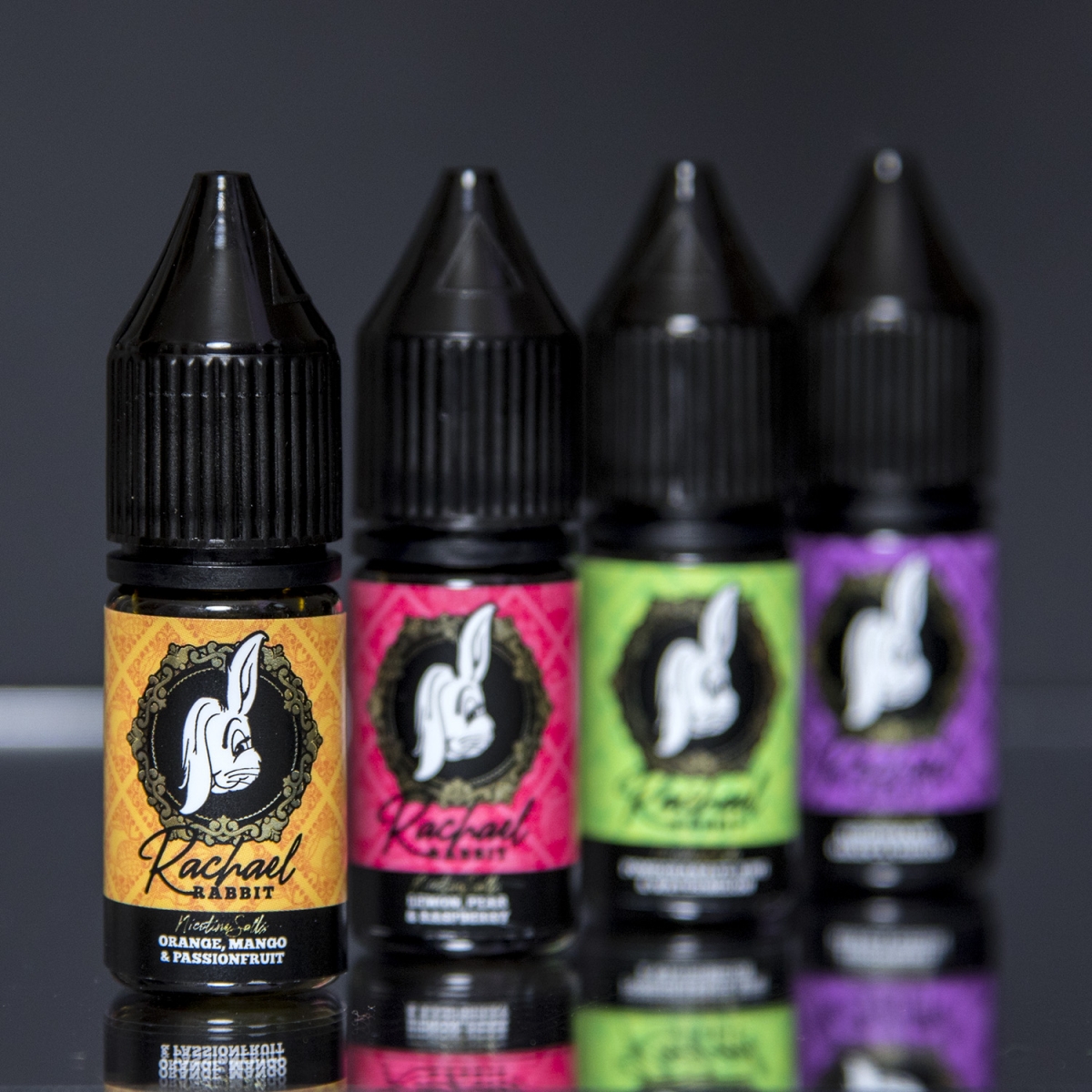 "Juicy orange, sweet mango and luscious passion fruit; it's bursting with exotic, tropical goodness! A touch of cool tunes up the flavour to give the ultimate fruity experience."

*This is exactly the same review as the shortfill with slight edits, I’m not being lazy but I found it to be the same flavour experience*

My second choice and again the combination of this recipe is another winner, though I found this combination surprising. I expected the orange to be the dominant flavour but I was wrong, in fact I would not say there is a single dominant flavour. The blend is something very difficult to put into words but damn, it just works! I am detecting the flavour tones of each but it’s like a cocktail where the three blend together perfectly and it's very moreish. The orange that I was expecting to be dominant ended up being the least prominent, I can just imagine the mixing process “needs just a splash of Orange” and they were right.

Again it performed well in all setups but this one excelled in RTAs especially the KF Lite.
I also tried it in a Billet Box with the Exocet bridge which was as good and I got through a tank faster than I usually do, I couldn’t put it down.

The koolada was just a hint and gave that drink vape experience, very refreshing, two on the trot that changed my mind about koolada!

As with the first, this makes a great ADV choice and I really enjoyed this recipe a lot.

I was hard pushed already to choose between this and the Lemon Pear & Raspberry so it scores the same. 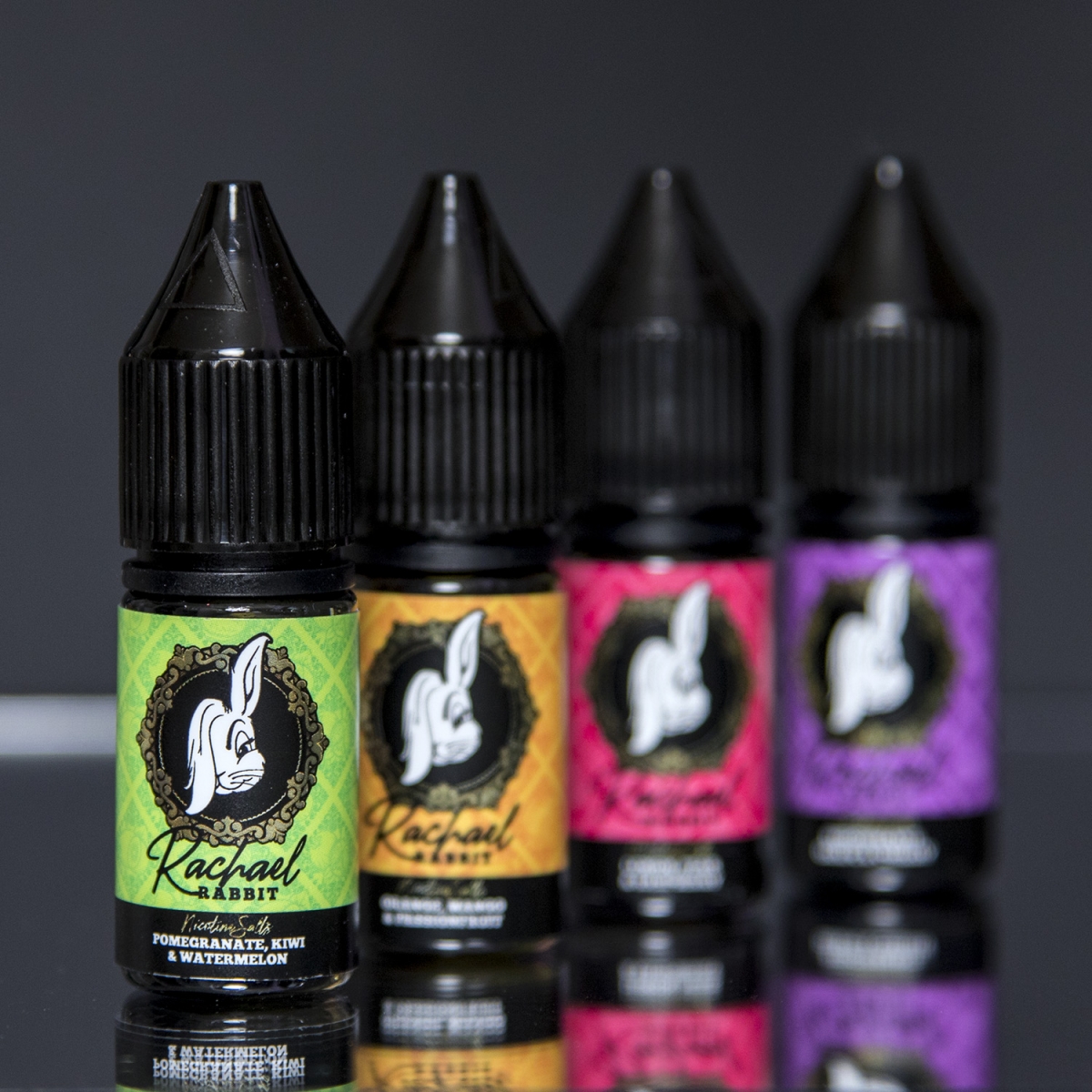 This one was different to the other two as the taste was actually marginally better than the shortfill. After finding little difference in the setups, I chose just the KF Lite RTA and the Vapefly Jester to test this flavour. For some reason, the separate flavours were more distinctive. I’m not certain but there seemed to be no koolada aftertaste which left more flavour in your mouth as an aftertaste notably the Watermelon. I totally love this fruity mix flavour and soon got through the juice apart from a few ml that I’m saving as a treat, definitely going on my next order. 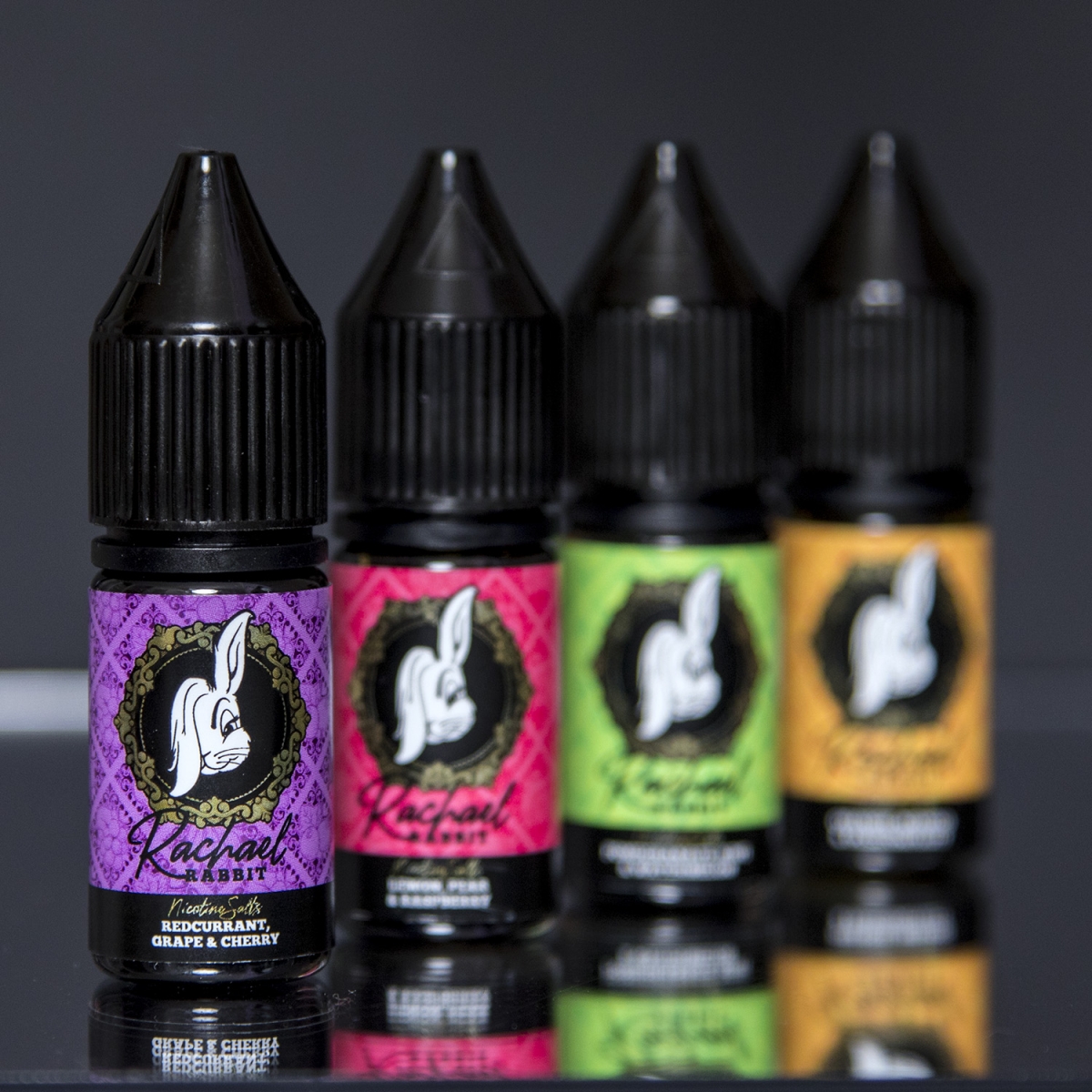 "Deep, Juicy Redcurrants complemented with sweet dark grapes and undertones of fresh cherries brings a group of dark forest fruits and a touch of koolada gives a slight cooling effect."

I saved this flavour until last as it was not in the shortfill range I tried, and if I’m honest it’s not a flavour I would have chosen as I am not a fan of Redcurrant and also Cherry is a tough one to get right. In fact I have yet to find a satisfying cherry flavour so admittedly I went into this flavour expecting it to be the worst choice for my tastes.

To my delight, this yet another cocktail of flavours that strangely complement each other with what appears to be an equal ratio balance. The grape tone appears to be the bonding flavour, no flavour comes across as dominant leaving a rich blend that is simply delicious. The koolada also adds to the blend and, though hardly noticeable, it has the drink style vape. The inhale is the same as the exhale and the aftertaste is where you can distinguish the cherry which is very pleasant. This is another recipe that isn’t overwhelming or one that will get boring. It's left me with quite a dilemma to choose which is my ‘flavour-ite’ which is a good thing as far as I am concerned. 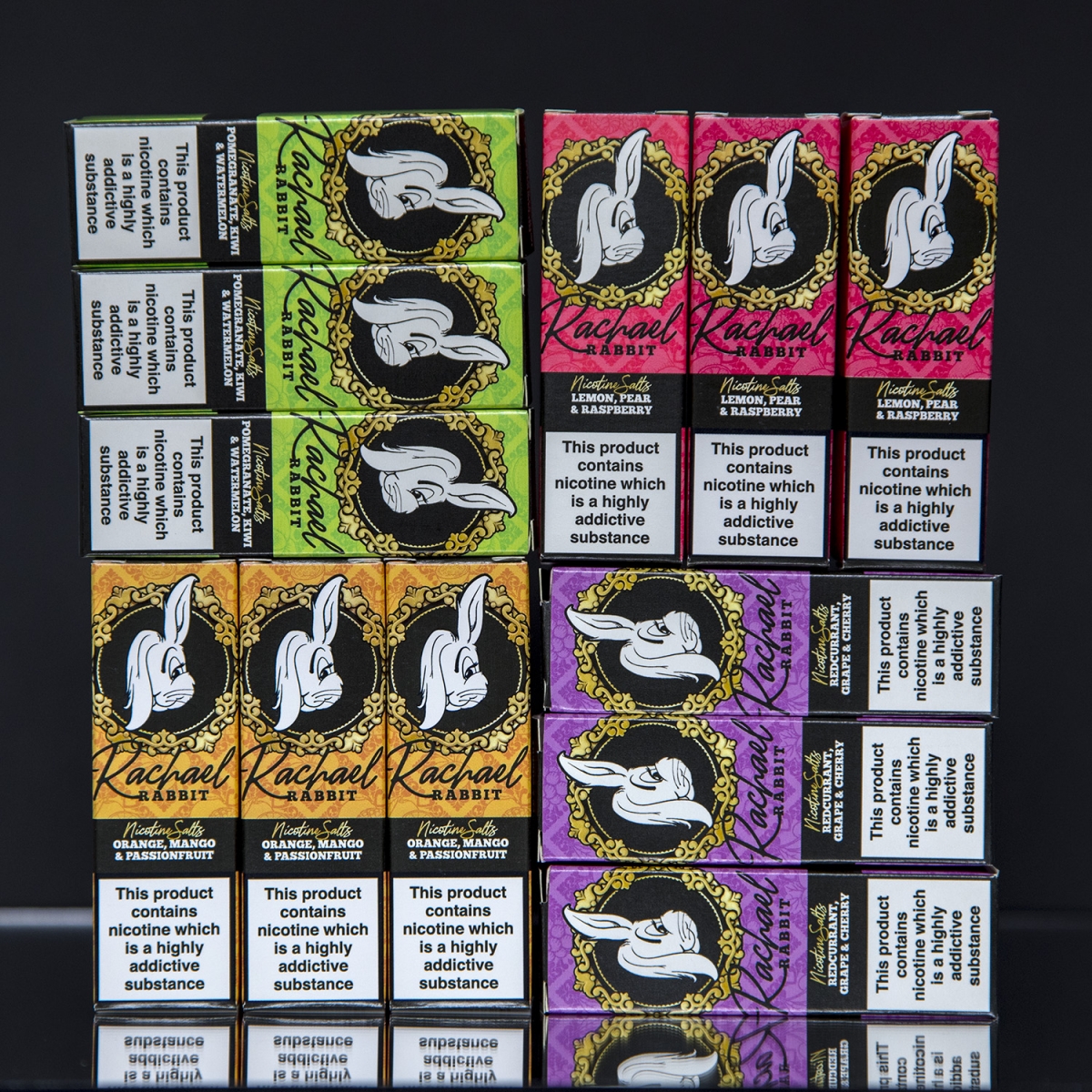 First and foremost, Jack Rabbit have done an amazing job replicating the flavour profiles of their shortfill range. It is the first time I have found a company to successfully achieve this. Another frustrating thing I have found in Nic Salt flavours are descriptions not matching the flavours, but with the Rachael Rabbit range you get EXACTLY the flavours promised on the label so a huge pro for that.

It’s a rare thing to have three out of three top rated juices from the shortfill review but four out of four superb smooth flavours in the nic salts range gives me even more faith in this brand. As previously mentioned, you can tell a lot of work has gone into these juices and flavour profiles, be it shortfill or nic salts. They sure have that premium taste, and I imagine a lot of effort has gone into blending and tweaking these flavour profiles and the balance is perfect. The use of koolada (despite my previous dislike for it) is a good call and adds a refreshing finish to the flavours to compliment the them without actually noticing them.

All of the flavours suited whichever MTL setup I tried them in, making them an ideal all-rounder for pods, AIO’s RDA’s and RTA’s. The flavour is strong enough to deliver great flavour in each but it is never overwhelming.

If I sound like a fanboy of Rachael Rabbit juices, it is because I have become one. They have been a pleasure to review and they have gained a customer in me. I am probably going to stock up on each flavour as I can’t see them becoming boring any time soon.

I don’t say this lightly but ALL of these flavours are now my favourite Nic Salts, and I have tried many great and poor flavours. Jack Rabbit have gained a loyal customer from me and I am also curious to try the other juices in their arsenal, surely they all can’t be this good? 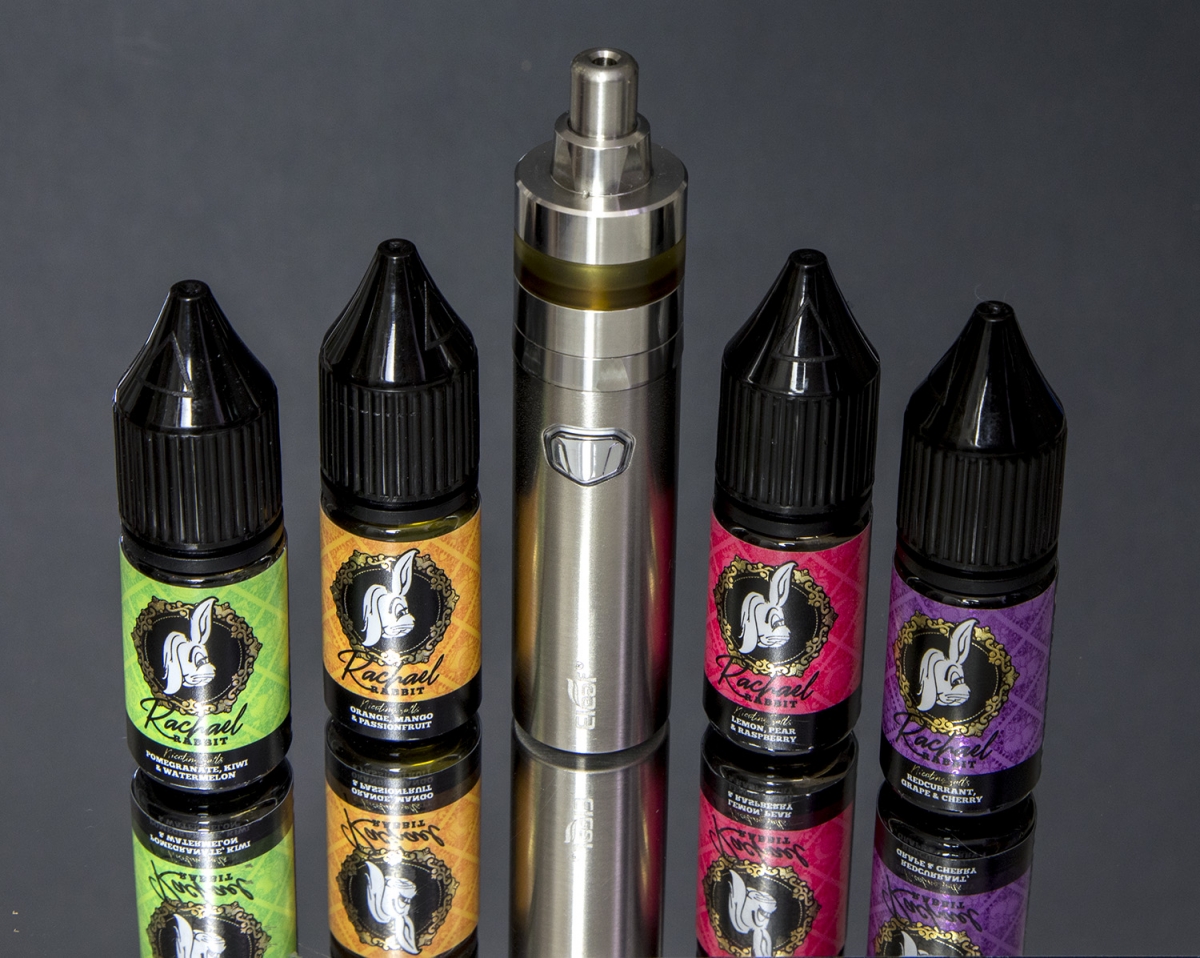