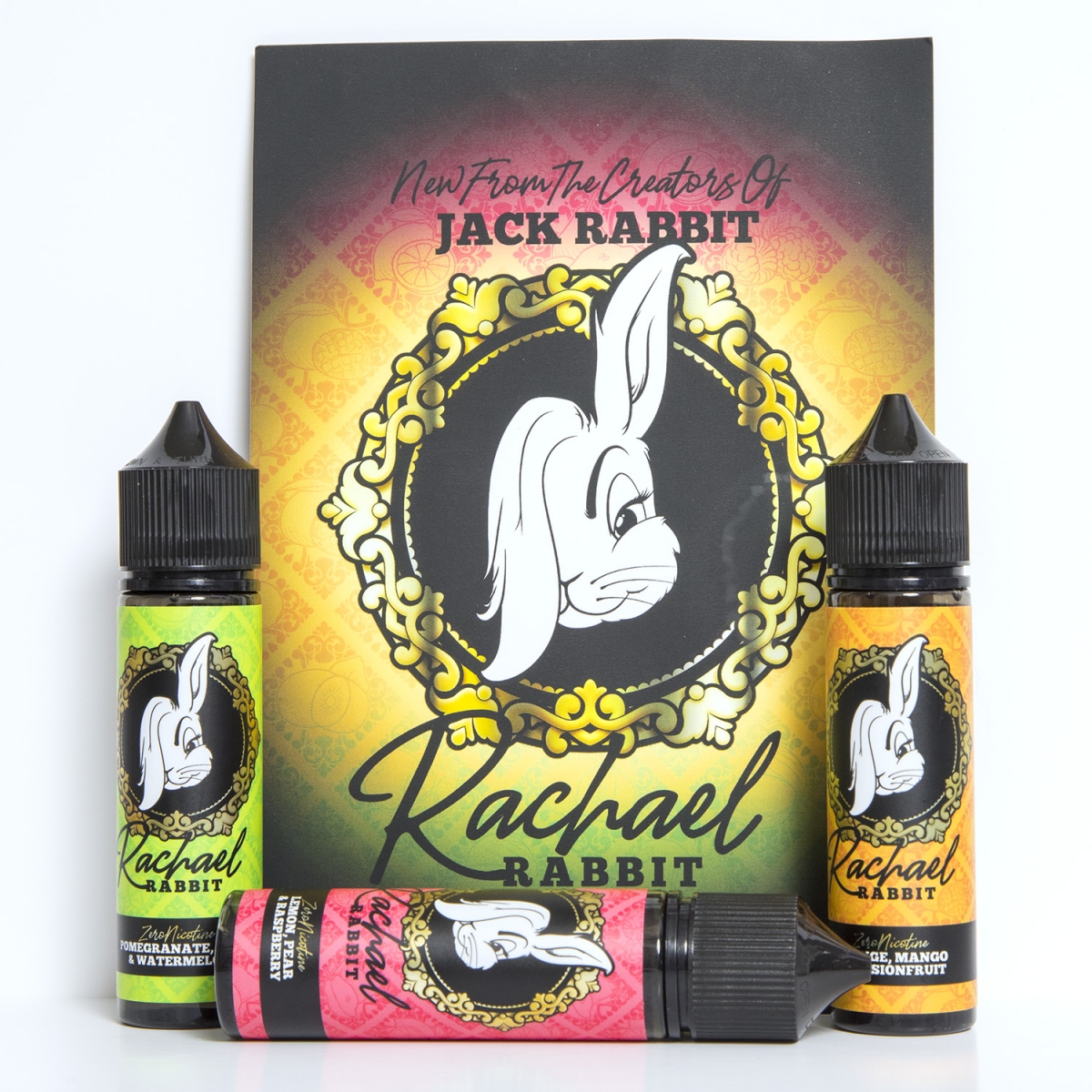 It’s rare I do juice reviews, taste is indeed subjective and I am VERY fussy, so when these came up for review these fruity flavour combinations sounded lush and right up my street.

I will review each juice in the order I tested them in, I exclusively vaped this juice range until each bottle was empty so as not to impair my taste with my regular juices, also I like to finish off the bottle to give a complete opinion as I have bought many juices and got tired of the flavour after half a bottle.

After adding nic shots I shook the bejeezus out of them and let them settle over night, I also used them in a variety of my best flavour sub omh tanks: 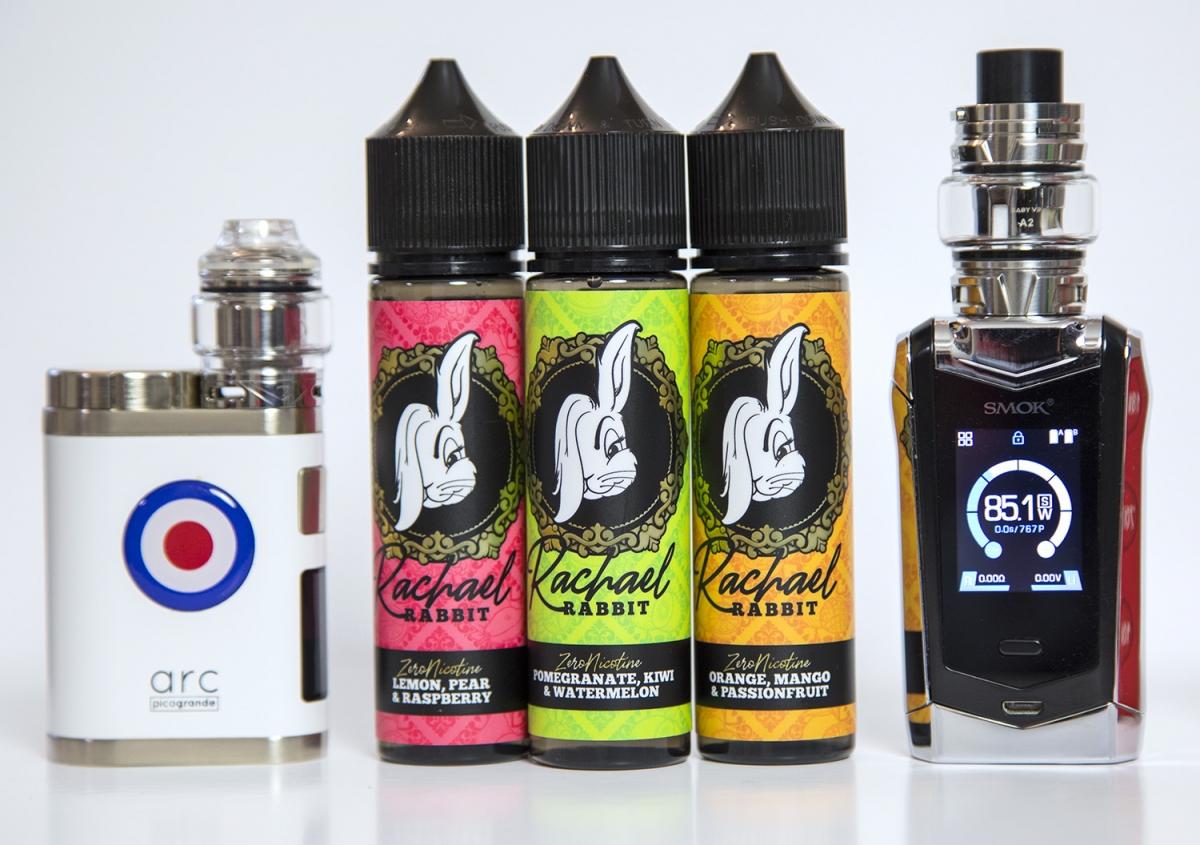 Bottle fill nozzles come off fairly easy with a little indent a coin or screwdriver can fit into and a simple flip frees it, pop in your nic shot and it snaps back on just as easy, little touches like this are a pro as I hate wrestling some shortfill tops off!

Now before I begin I have to confess that I avoid anything with ‘koolada’ which comes from my early vaping days where some of the flavours I tried where koolada was over used to hide poor flavours, I didn’t realise this range had koolada but they have changed my ways, the Rachael Rabbit flavours are a perfect balance, flavour first with subtle koolada – big pro already J

So onto the actual flavours………… 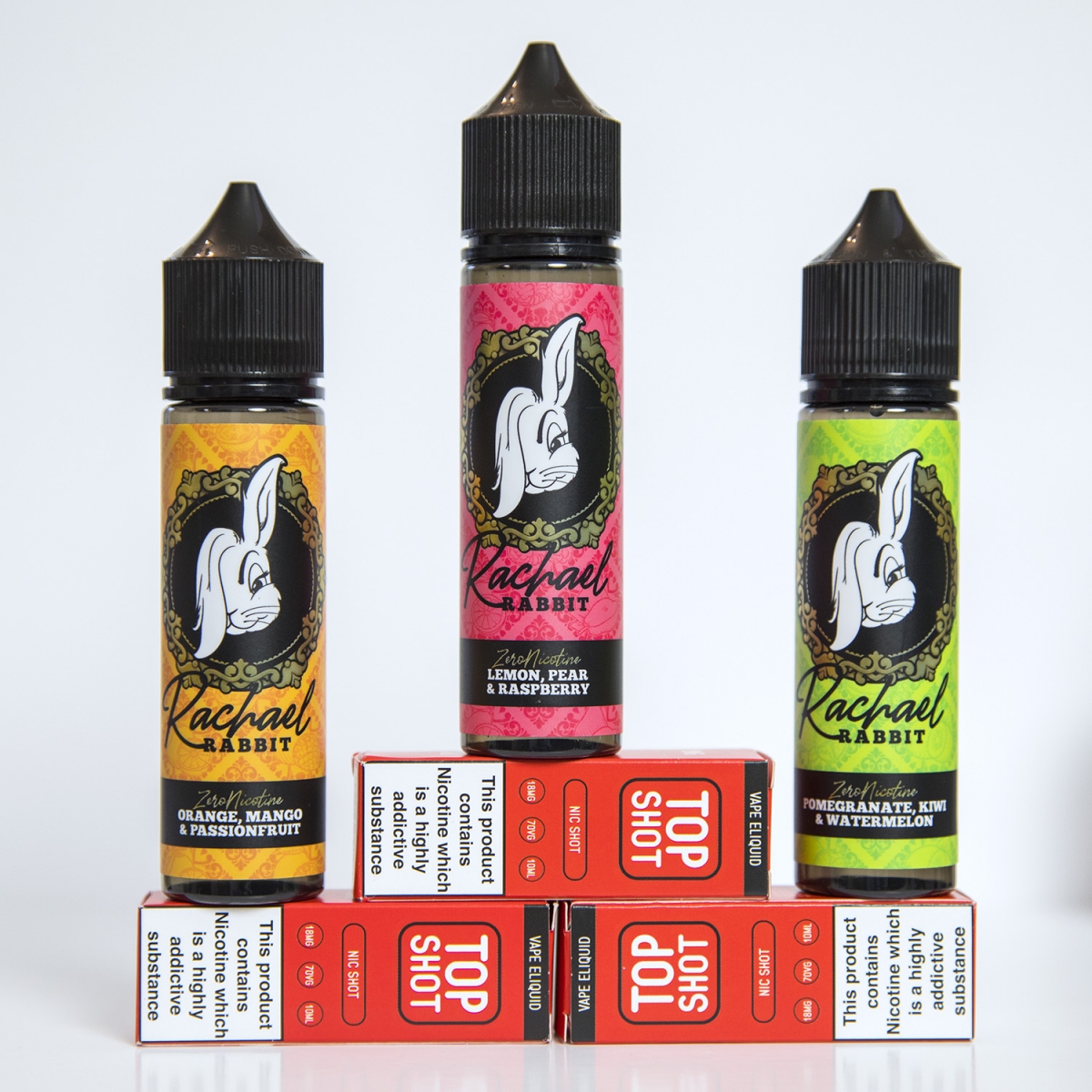 The first one I tested was: 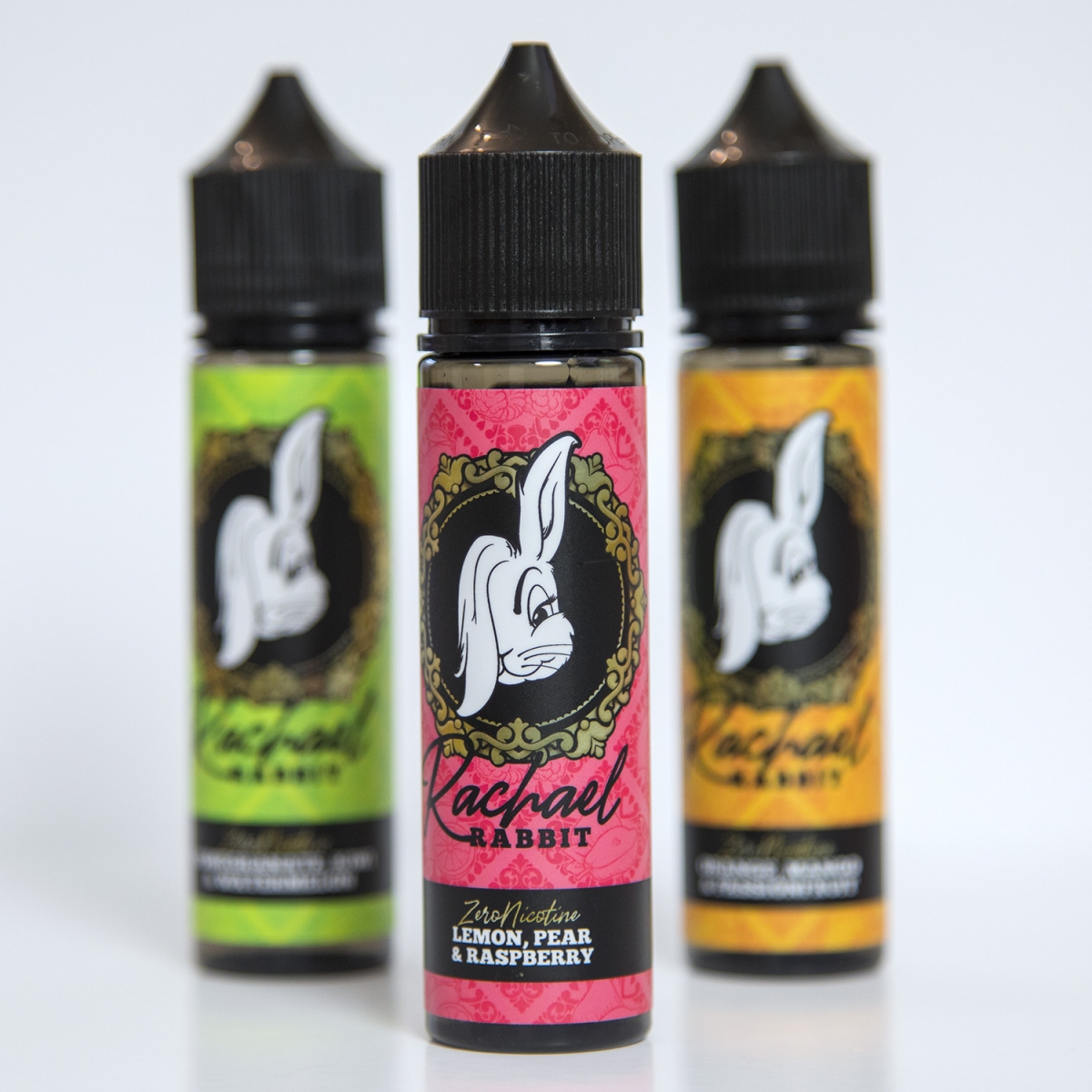 Tangy raspberry with citrus tones from sweet lemon, are complemented with ripe and juicy pear notes. With koolada to round the flavour profile and produce a truly unique e-liquid.

So this was the first one I tried as the flavour combination sounded delicious, I was not disappointed, I soon demolished this bottle via Smok mesh coils and the Wasp Nano.

It’s one of those juices where you experience different flavour tones on the inhale and exhale leaving a nice taste in your mouth, on the inhale you kind of get the whole blend taste experience and on the exhale the pear taste comes through, it’s combination is really satisfying and a flavourful that I would consider this as an ADV (All Day Vape).

I was a little saddened when I squeezed the last few ml out which says it all. 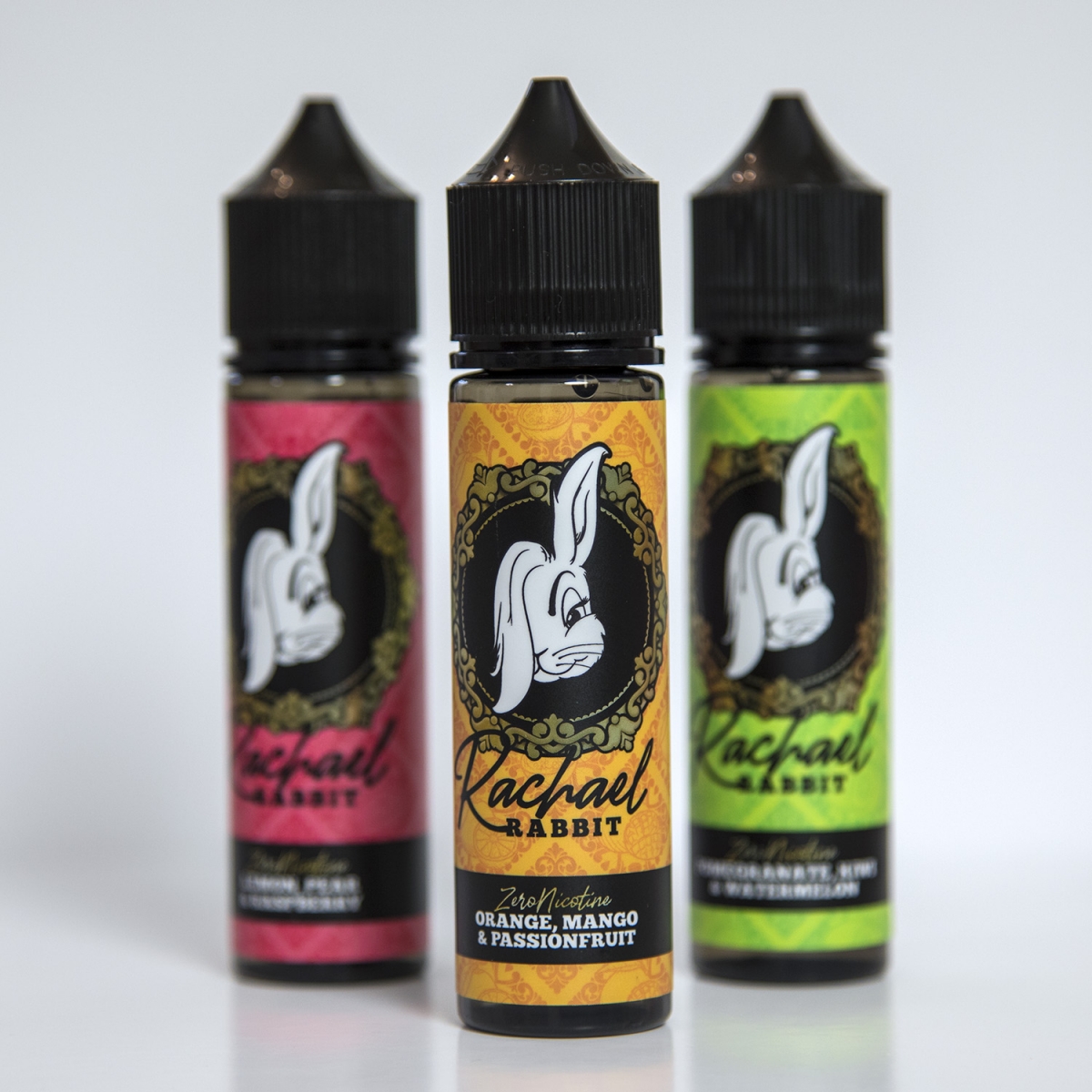 Juicy orange, sweet mango and luscious passion fruit; it 's bursting with exotic, tropical goodness! A touch of cool tunes up the flavour to give the ultimate fruity experience.

My second choice and again the combination of this recipe is another winner, though I found this combination surprising, I expected the Orange to be the dominant flavour but I was wrong in fact I would not say there is a single dominant flavour, the blend is something very difficult to put into words but damn it just works! I am detecting the flavour tones of each but it’s like a cocktail where the 3 blend together perfectly and very moreish, the orange that I was expecting to be dominant ended up being the least prominent, I can just imagine the mixing process “needs just a splash of Orange” and they were right.

Again the koolada was just a hint and gave that drink vape experience, very refreshing, 2 on the trot that changed my mind about koolada!

As with the first this makes a great ADV choice and I really enjoyed this recipe a lot.

I was hard pushed already to choose between this and the Lemon Pear & Raspberry so it scores the same. 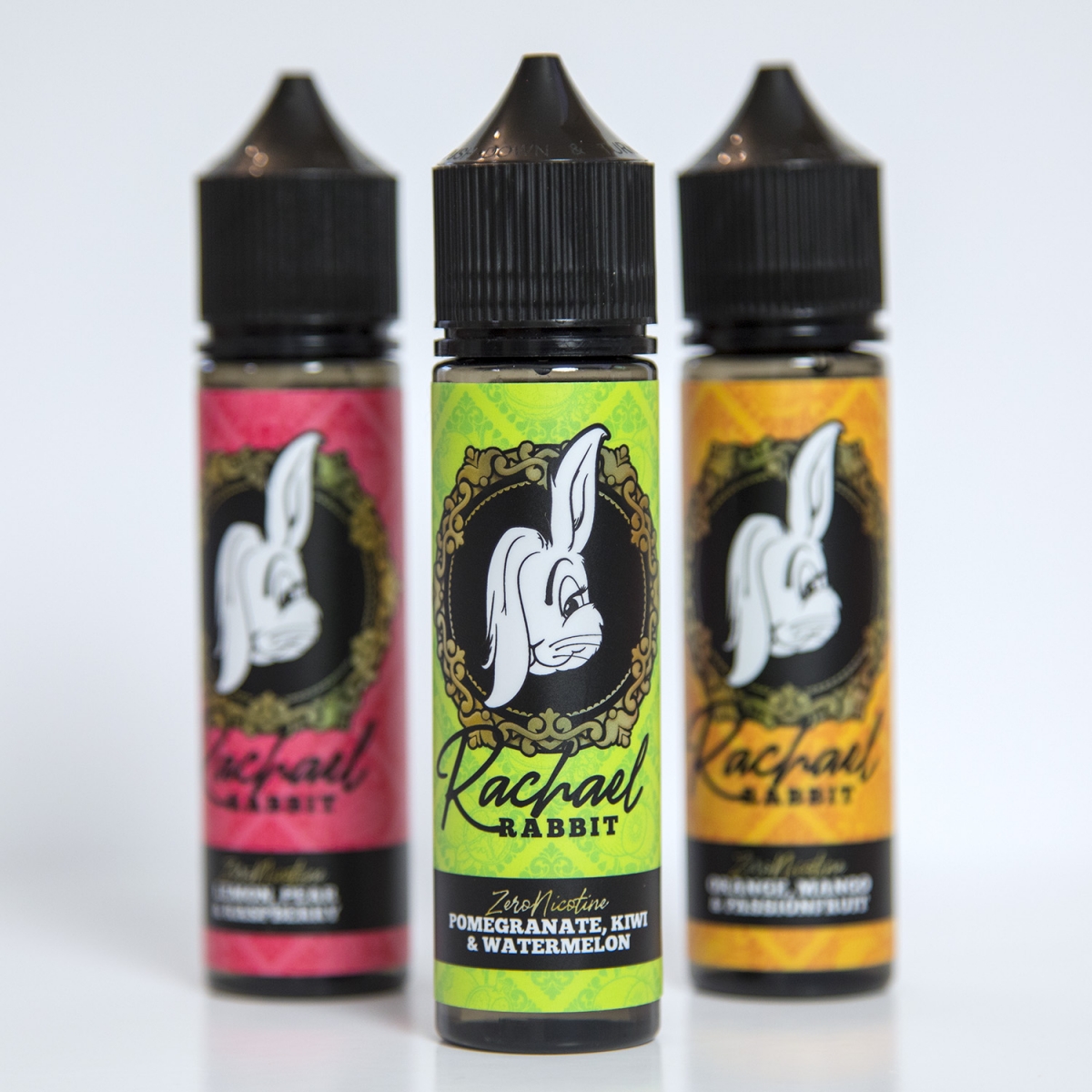 I chose this as my last flavour to try as it wasn’t something I expected to be very flavourful, in fact I wouldn’t pick it out from a shelf to try, as with the other flavours I use a fresh mesh coil to test so as I was priming the coil the scent really caught my attention, it smelt lush! I grew impatient waiting for the coil to saturate to see if it tasted as good as it smelled.

After a long 15-20 minutes I eased in the coil and the flavour was already coming through and as I eased up to the wattage the flavour profile burst through (reminds me of some of those bursting fruit juice adverts), this was the surprise of the 3 for me, I assume “with a touch of ice” means koolada again, this one behaved differently to the other 2 I found it was almost too intense with the mesh coil and found the sweet spot 10 watts lower than normal for the best flavour and on the Wasp Nano RTA the vape was even better, the koolada was hardly noticeable and the flavour was sooooo damn good! Though mostly on the exhale and it stays longer on your taste buds, I’m not sure why this one is different to the other 2 but it ended up being my favourite out of the 3, the Kiwi Fruit was slightly dominant but not enough to mute the watermelon and pomegranate, it’s a bit more sweeter than the other 2 also but not what I would class as a sweet juice if that makes sense?

I also varied this test by squonking into a Drop Solo RDA which gave the same experience as the wasp, a very enjoyable vape, I have 5ml left in my Wasp RTA I’m saving as a treat. 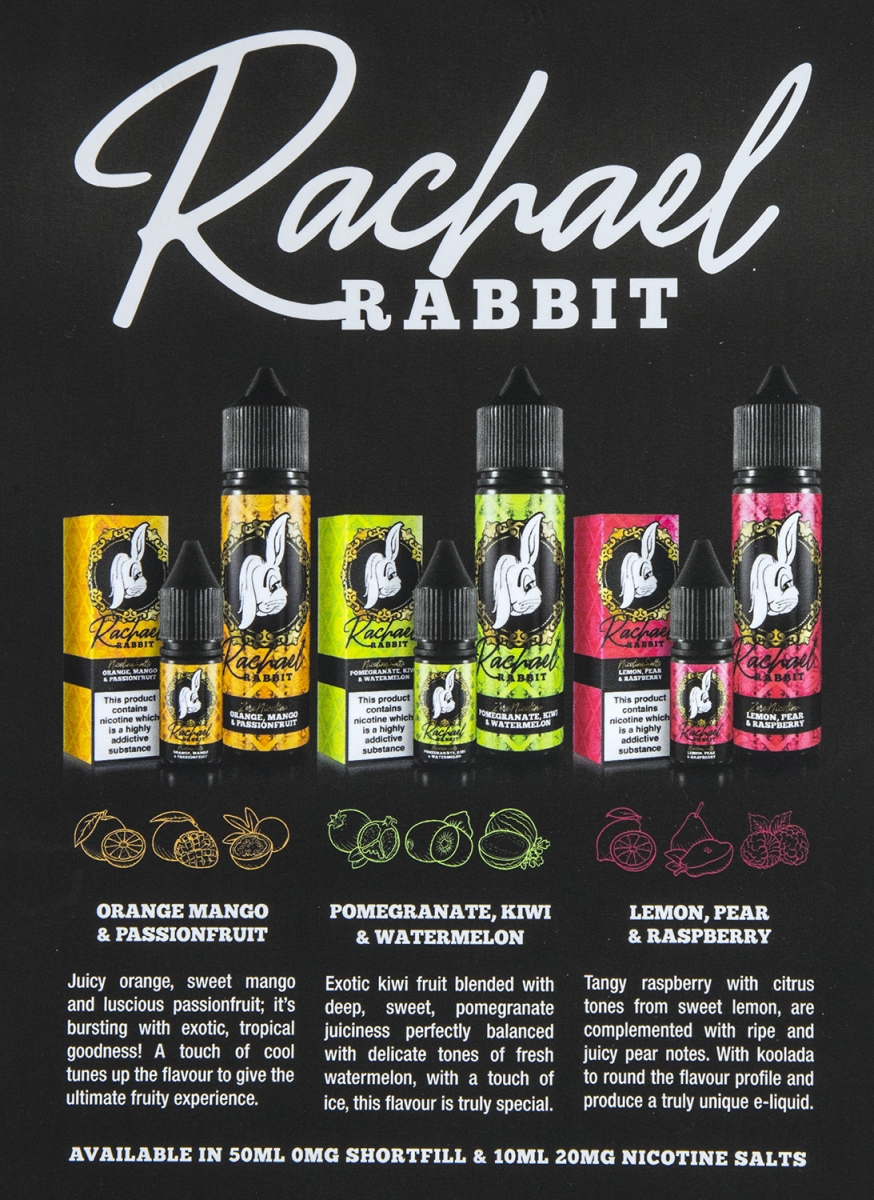 It’s a rare thing to have 3 out of 3 juices that are great flavours and on par with each other, you can tell a lot of work has gone into these juices and flavour profiles, they sure have that premium taste and I imagine a lot of effort has gone into blending and tweaking these flavour profiles and the balance is perfect, the use of koolada (despite my previous dislike for it) is a good call and adds a refreshing finish to the flavours to compliment them.

It also looks like they took time concentrating on just 3 flavours rather than whack out a load without paying the attention to them as they have done on just 3, hats off to them for that.

I did find that the flavours behaved differently using Mesh high wattage coils compared to a lower wattage single coil RTA, the mesh is more intense and the koolada is more noticeable but not overpowering, using a traditional coil RTA was more enjoyable for me as the flavour was a lot smoother and the bonus of the juice lasting longer.

I also see they do Nic Salts in the same flavours – I am having some of that!

The Rachel Rabbit range and others from Jack Rabbit Vapes are available to buy here at the bargain price of £13.99 for a 50ml short fill or £4.99 for a pre-mixed 10ml bottle.