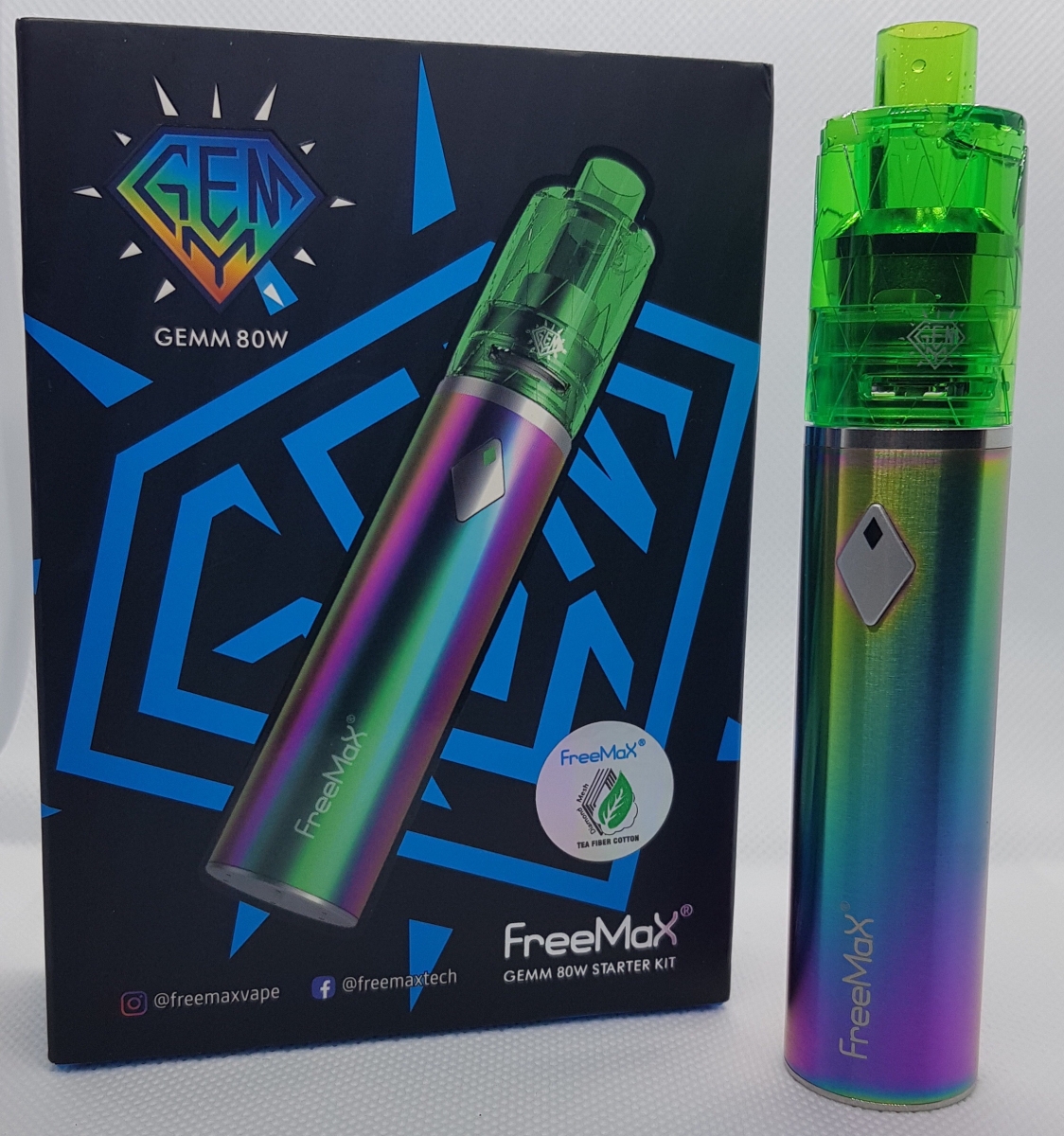 Heaven gifts have kindly sent out the FreeMax Gemm 80W starter kit for review so let’s dive in and see what FreeMax’s latest budget starter kit has to offer.

Packaging follows FreeMax’s other recent releases with a printed outer sleeve showing the kit in your chosen colour on the front, plenty of information on the back, and scratch and sniff authentication codes and social media links on the sides. The kit sent for review is the rainbow variant and it’s also available in blue, black, purple and white.

Removing the sleeve, you are presented with a sturdy blue box with more branding which protects everything well in transit. Inside this, you have the usual manual, warranty and warning cards, a plastic bag with spare fill port plugs and the ubiquitous baggy of “do not eat”, under which you will find the Gemm mod and two disposable Gemm tanks alongside a cardboard box containing, you guessed it, a USB cable. 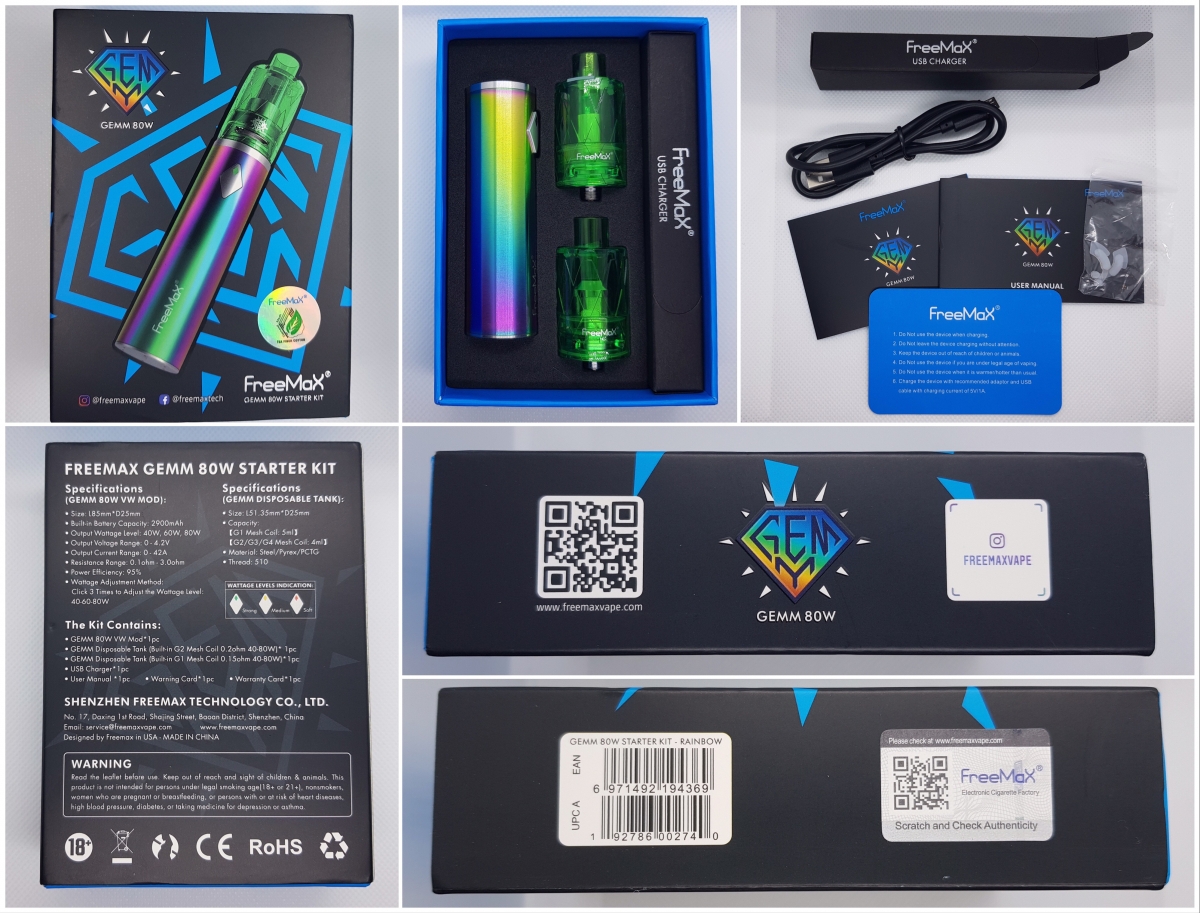 The FreeMax Gemm mod is a standard metal tube style affair which is 85mm tall with a 25mm diameter. It feels fairly lightweight despite its 2900mah capacity. Up top is the 510 platform with a spring loaded 510 pin which looks fine with any atomizer up to 25mm without any overhang. On the bottom, there is six holes for ventilation should things go wrong. On the front there is a diamond shaped fire button with a led indicator built into the button. The button feels like plastic unlike the rest of the mod, but it’s raised up off the main body which makes it easy to locate with your finger and has a nice positive click. On the opposite side from the fire button, there’s a micro USB charge port. As you would expect from a modern regulated mod, there’s a whole host of built in safety features as well like short circuit and overcharging protection.

Set up and usage

The kit supplied for review is the international version with 4.5ml tanks, which are 25mm diameter and 56mm tall (including the integrated drip tip, but not the 510 connector). TPD specific packaging will also be available with 2ml tanks, which will reduce the overall height of the tank by 8.8mm. The tanks are constructed with PCTG and feature a diamond cut pattern on their surface, with a large adjustable cyclops airflow on the bottom. Filling is achieved with a removable silicone bung along the top next to the drip tip which reveals a generous sized fill port which proved to be very easy to use. I was even able to use a 120ml chubby gorilla bottle without much fuss. As with any plastic tank, there may be issues with tank crackers like citrus flavour, however as they are completely disposable and likely to only be in service for a week so it shouldn’t be of too much concern.

Two tanks are supplied in the starter kit, a 0.15ohm single mesh and a 0.2ohm dual mesh, which are both rated for 40 to 80 watts. A total of six different variants of the Gemm tank are available (see the FreeMax site for more information), so if either of these isn’t to your liking then you should be able to find one that is. Gemm tanks are also made in several different colours and the tanks in the kits will match the colour of your mod. 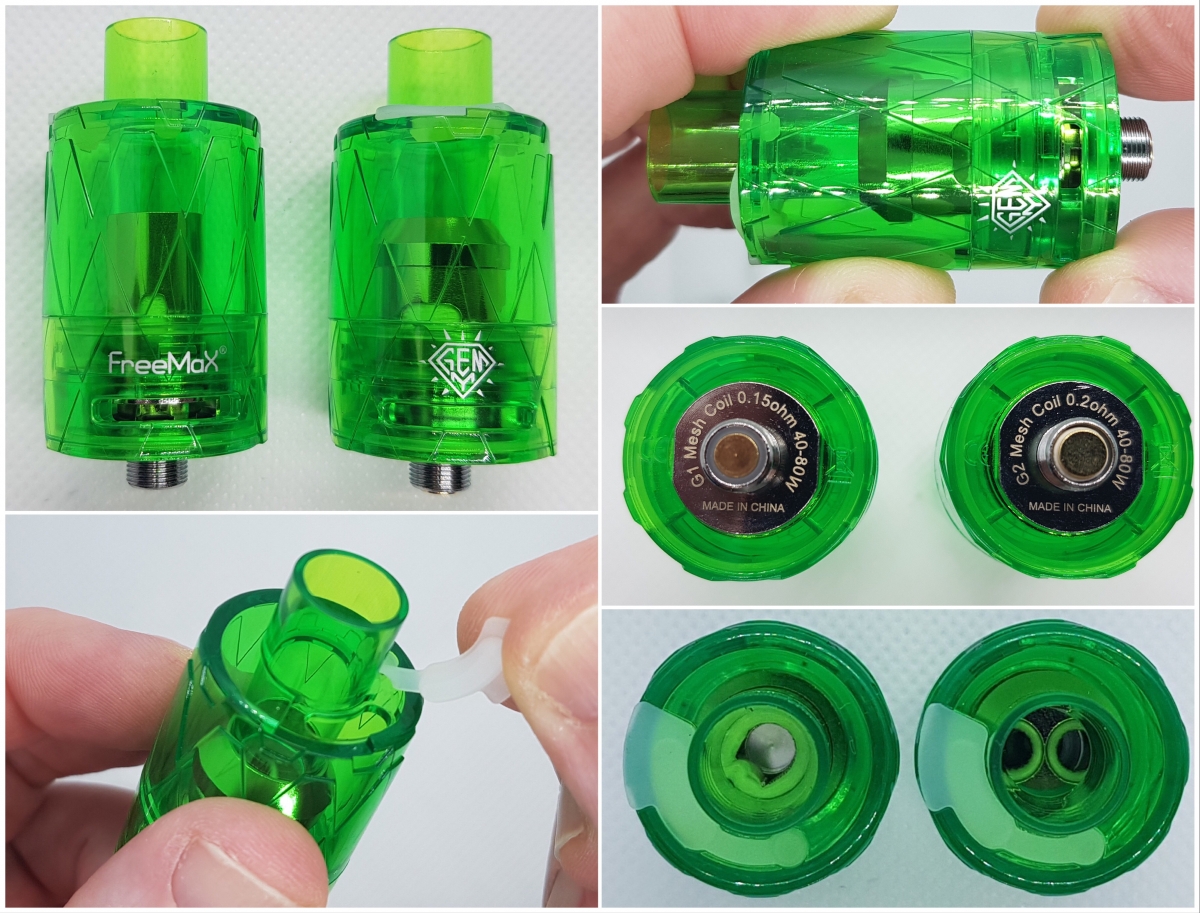 Unlike most tube style starter mods on the market, which are simple bypass mods with built in protections, the FreeMax Gemm has a trick up its sleeve in the form of adjustable power levels. The desired power level is selected by pressing the fire button three times and is indicated by a traffic light system, red is low, yellow is medium, and green is high. Combined with the adjustable airflow on the Gemm tanks this should allow you to dial in your vape to suit your taste.

The led is also used to show battery percentage when you press the fire button. Green is above 65%, yellow is 30 to 65%, and red is below 30%. The Led is nice and bright as well and I’ve had no difficulty seeing it when outside.

Battery life seemed surprisingly good, I got through a whole day at work with the 0.2 coil on the medium/yellow (60W) setting but the power did feel to fall off towards the end feeling more like the low/red (40W) setting once the battery status dropped in to the red.

Charging peaked at 1.58 amps initially, dropped to around 1.25 amps for most of the charge cycle then dipped to  0.75 amps during the final stages. Charging time was around 2h 35m with 2293mAh recorded on the first run, and 2h 43m with 2445mAh on a second run. Both runs show significantly less than the claimed 2900mAh capacity, but charging times are a big improvement over the FreeMax Twister mod I reviewed a while back which took almost 4 hours to charge!

Once you’ve used up the Gemm tanks you can of course use your own atomizers on the Gemm mod and still use the three different power settings to dial in your vape. I’m assuming that the low/medium/high settings alter the output voltage so anything that works well in the 3.5 to 4.2 volt range should be good, however the FreeMax site isn’t helpful in this regard and even their own figures (quoted in watts) differ when using two different Gemm tanks with the same resistance value and I lack the equipment to test this further. 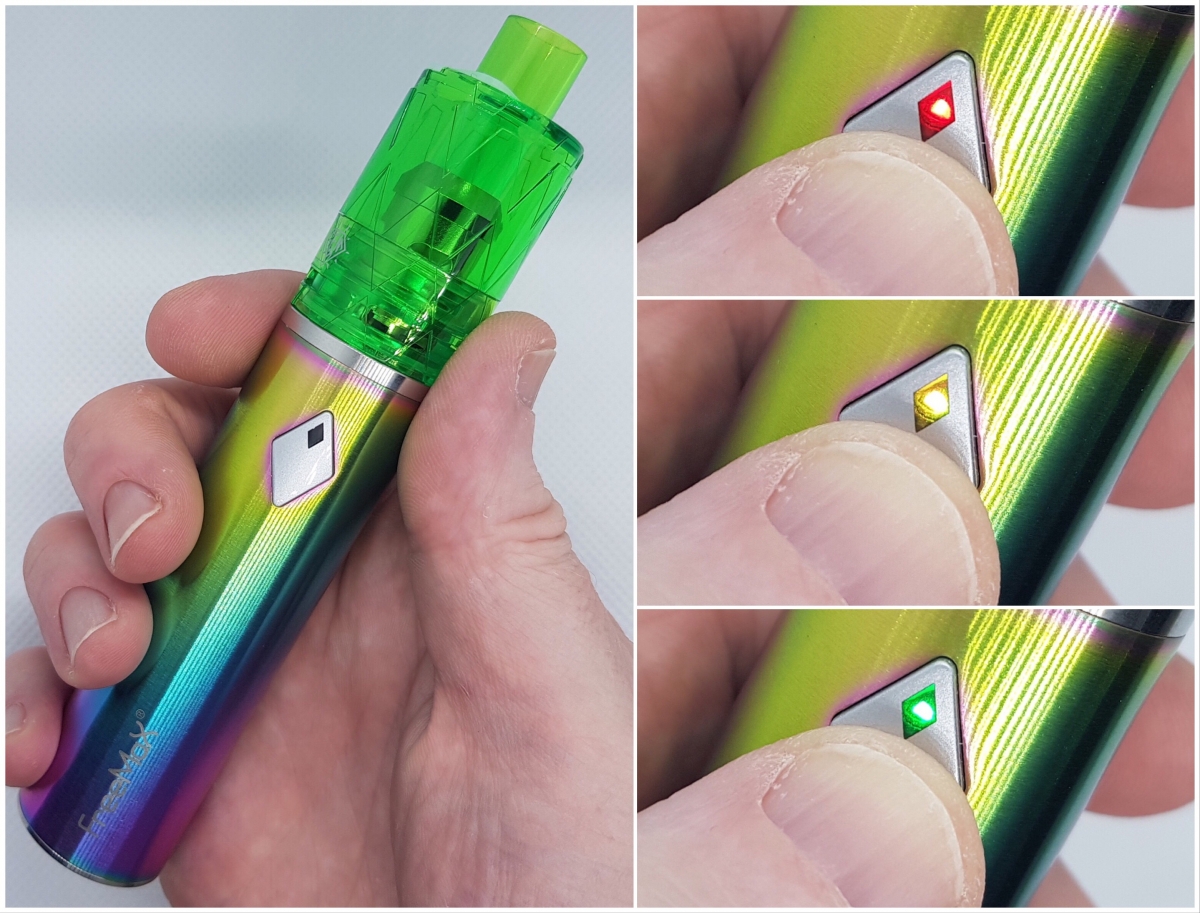 The Gemm tanks use FreeMax’s innovative Tea fiber wicking material which they claim enhances the flavour of your e-liquids and in testing they seemed to live up to this claim with little to no break in time, and good flavour throughout their lifetime. Both coils seemed to wick extremely well and on the 0.2ohm coil I got 8 days continuous use from the coil, although I was periodically having to stop and take a few dry pulls on the coil to resaturate the wick for the last day or so. Both tanks have bags of airflow and I was running them at about two thirds open for the best results.

At just $24.18 from Heaven gifts, this is a great value kit for someone wanting to try out sub ohm vaping without breaking the bank.

Despite my misgivings about disposable tanks, I can see that they have a place in the market. There are situations where you might be concerned about losing or breaking your tank or even if you’ve already done either of these things and need something cheap to use until you can get back to your other gear for example. Both tanks were easy to use and fill and performed very well in testing giving me a satisfying vape.

The Gemm mod is a step above other stick style mods thanks to those adjustable power settings, it feels well made, and gave me great battery life as well. Even if you don’t go onto buy any more Gemm tanks, the mod will continue to be useful for your other atomizers and is worth the price of entry on it’s own.

Many thanks to our friends over at Heaven gifts for sending the kit out for review. You can find the kit on their site here and if you wish to buy additional tanks they are available here 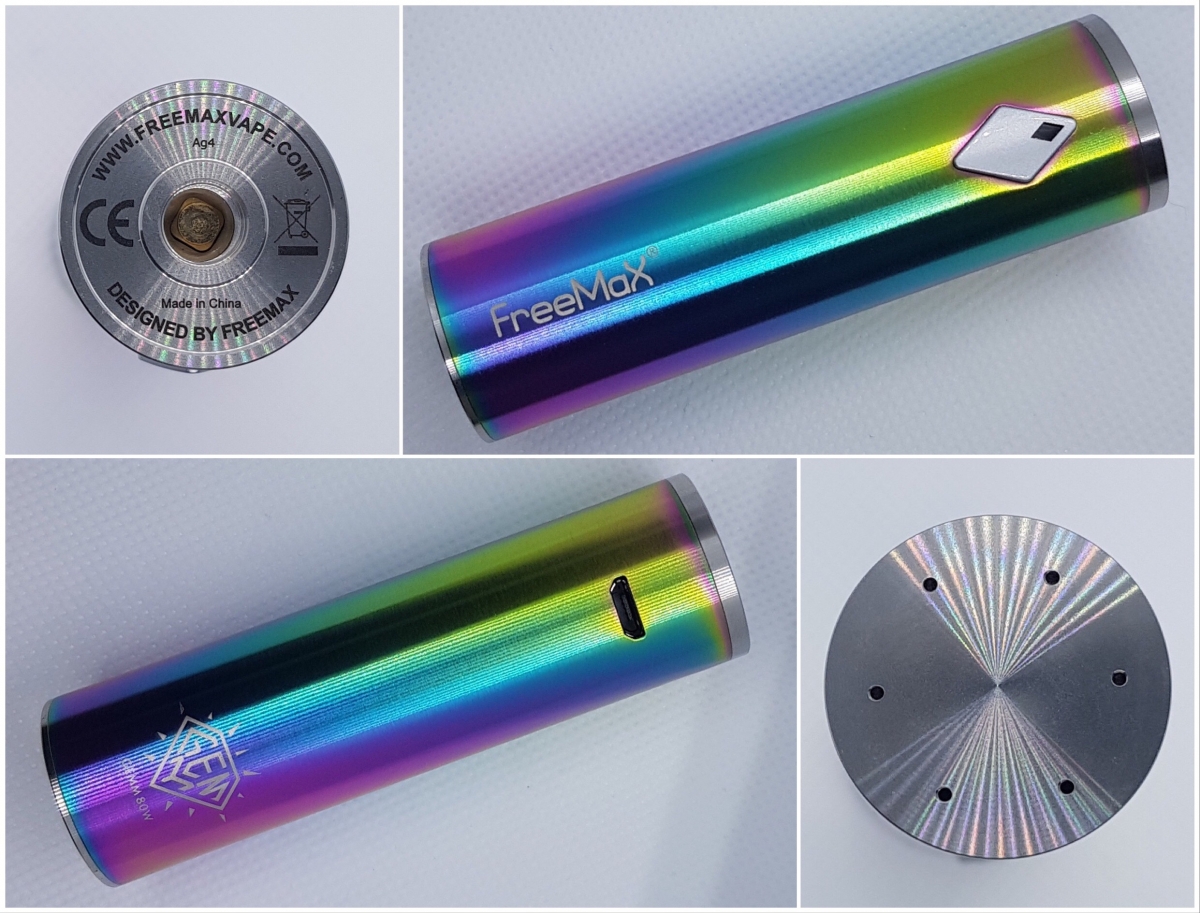