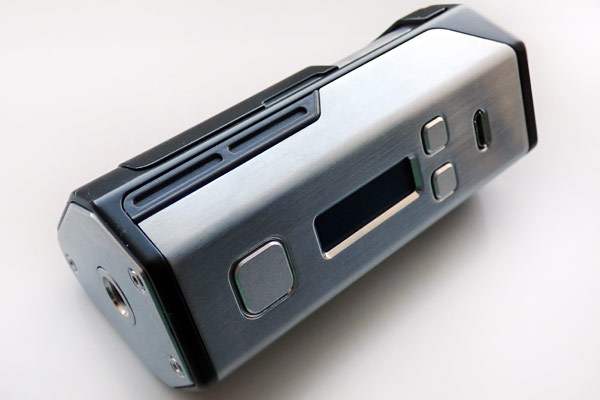 The Lost Vape Drone BF is a dual 18650 Squonker. Using the same patented DNA 250 Evolv chipset as the Therion 166 which is down throttled to a maximum Wattage of 167W to work with two batteries. The device can be used in either Variable Wattage or Temperature Control Mode with full support for all major wire types. The internal juice bottle holds 11ml of juice and the box includes two additional spare bottles.

Considering the consistent high quality of products from Lost Vape such as the Triade, Skar and Therion I expected great things form this device. The question is, does it deliver? We shall see!

After removing the Drone BF from its stylish rhomboid shaped box the first thing I noticed was the sheer weight of this device. It is very heavy and solid even without batteries fitted, yet despite the weight it feels comfortable in the hand and nicely balanced. The construction is superb and it feels extremely well-constructed!

The rhomboid design is very reminiscent of the Lost Vape Triade but keep in mind the Drone BF only requires two 18650 batteries since the third slot is taken up by the Squonk bottle. When you first get the device all three bottles are fitted inside the battery compartment. 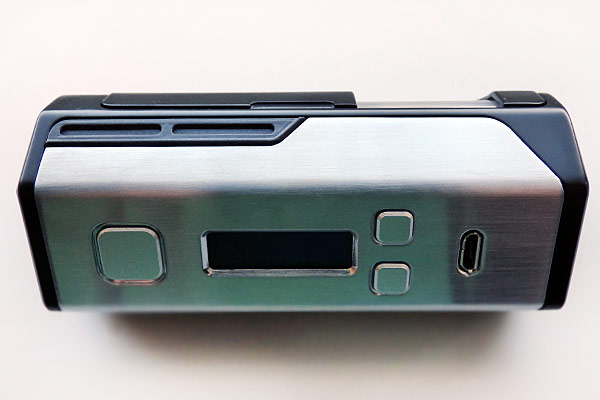 Even though this device is massive it looks very aesthetically pleasing and this is enhanced by the tasteful contrast of silver and black. The top of the device features a brushed stainless steel panel and can be used with Bottom Fed atomizers right away or alternatively with any other atomizer. The 510 pin is spring-loaded and I had no problems getting any of my atomizers to sit flush. I fitted Lost Vape’s Delirium BF RDA to the device which looked highly complementary.

The top of this device has tons of space so the diameter of your atomizers are unlikely to overhang. Even when fitting something very large like the Hellvape Iron Maiden RDTA would leave you with plenty of room to spare! 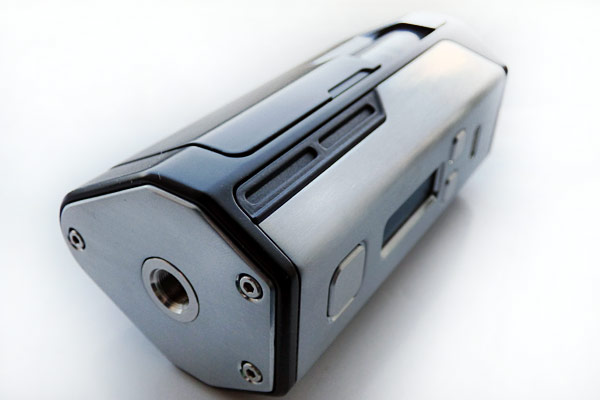 The device features a genuine DNA 250 chipset which is down-throttled to a maximum of 167W, essentially it is exactly the same as the Therion 166. There a pre-sets included for all of the major wire types (Ni200, Titanium and 316 Stainless Steel) and you have the additional option to use EScribe if you want further customization which is downloadable from Evolv.

The OLED display is bright and clear and features all of the typical information you would expect including Wattage, Voltage and Resistance. In addition the current battery life is displayed, the wire type, the Resistance Lock (when enabled) and Temperature (when in that mode). As long as you are familiar with DNA devices you will be right at home here.

The front panel is made from Stainless Steel and features three buttons, all of which feel good and are highly responsive with absolutely no rattle present. The battery compartment is nicely designed with the correct orientation clearly marked, the third slot is taken up by the juice bottle. There is also a ribbon inside the compartment to assist with battery removal. The battery lid is nicely secured by three strong magnets but like the Lost Vape Therion the device has an absence of venting but I assume the cut out for the Squonk bottle provides some of that.

One thing that is a little strange is the location of the cut out for the Squonk bottle. It doesn’t feel very natural to me as a right-handed user and quite often I would end up using my thumb to squeeze the bottle. In many respects it seems better suited to someone who is left-handed but I dare say I could get used to it in time. 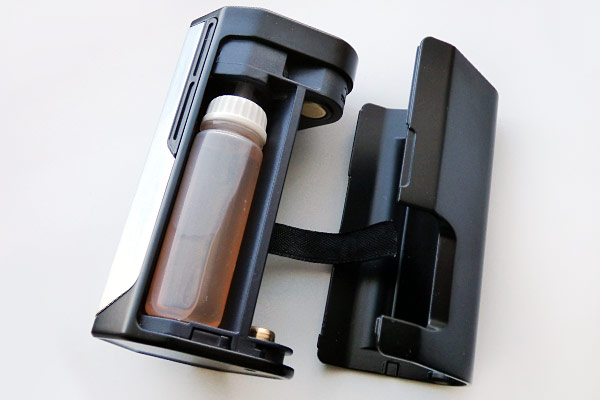 This is a typical DNA device which means they all work exactly the same way. It is quire straightforward for a newcomer to get to grips with and comes with a number of pre-sets so there is absolutely no need to mess around with EScribe if it doesn’t interest you. 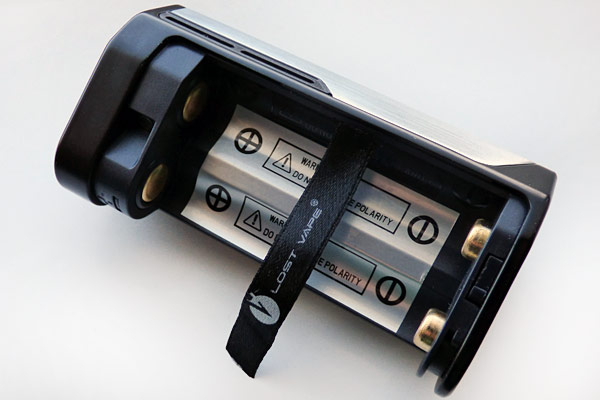 When using the Lost Vape Delirium BF RDA I got a consistently good vape but it did take me a short while getting used to squonking the right amount of juice. It is quite easy to overdo it and end up with juice pouring out of your RDA but thankfully due to the huge top plate of the Drone you can quickly mop it up before it runs anywhere else. 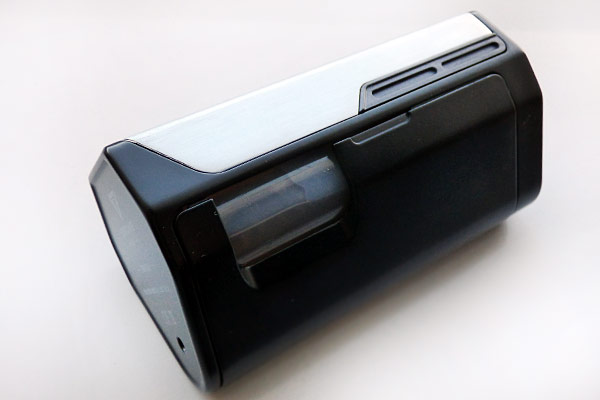 One thing I did notice was that the Squonk bottle was not as soft as the one that came with the Council of Vapor Wraith which I reviewed a while ago. I suspect the bottles bundled with the Drone will need a little bit of break in time because when new you do need to squeeze with some force. The position of the Squonk bottle cut out consistently felt weird to me since I had to squeeze the bottle with my thumb, so in the end I switched to using the device with my left hand which surprisingly felt a lot better and more comfortable.

Battery life was equivalent to my Lost Vape Therion 166 and fairly typical of most dual 18650 devices. Low Wattage will last you a day or two depending how frequently you vape and higher Wattage might offer either a full day or a number of hours.

The Lost Vape Drone is an impressively constructed device that performs flawlessly. The overall quality is beautiful and despite its sheer bulk and weight it feels very comfortable to hold. My only issue with it is the rather odd location of the Squonk bottle cut out which seems more suited to left-handed users and the bottles themselves are very stiff and need some break in time.

Overall this is a brilliant device, albeit a rather expensive one but this understandable due to the prestige construction and the DNA chipset. If you are looking for a top quality Squonker this one is well worth considering! 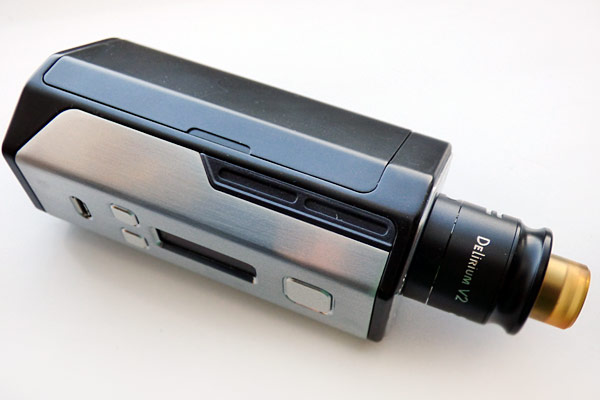