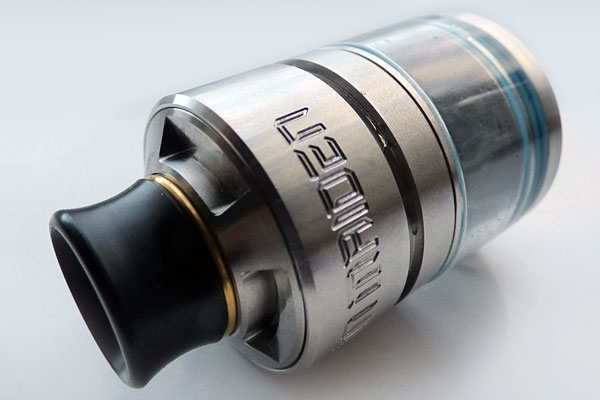 For anyone out there who is searching for a monstrous RDTA the Iron Maiden by Hellvape has you covered. 30mm diameter in size and with a massive 8.5ml E-Liquid capacity this atomizer is intended for dual coil builds. What’s more there is plenty of space for those builds since the deck itself is 22mm diameter.

Featuring tons of adjustable airflow at both the side and the top this is really going to appeal to cloud chasing fans! In addition to make sure you don’t lose out on too much flavour when you have that airflow all the way open the deck is covered by a full ceramic chamber that also features an anti-spit back guard. 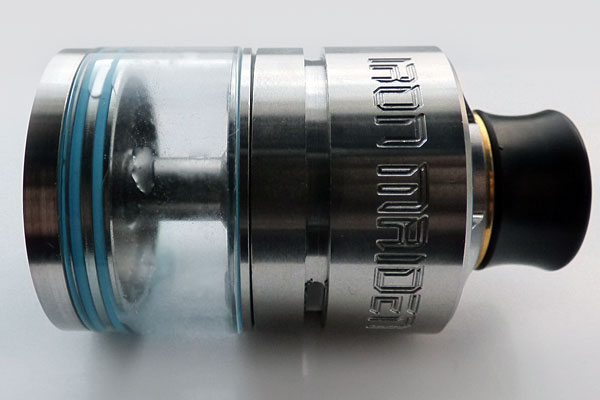 As you can imagine being a massive 30mm in diameter this RDTA is going to look extremely daft on a lot of mods but assuming you have something that suits it you’ll certainly be noticed at vape meets. The overall Stainless Steel construction is extremely solid and on the whole it is machined pretty well except for some slightly sharp edges in a few areas.

It is one seriously hefty atomizer and given that it needs an appropriately large mod to look its best I think it is rather unlikely that you will want to take it out and about with you but you never know with some folks. The Pyrex glass is solid and you do get a spare glass tube in the box should you ever have an accident.

The included Delrin drip tip is suitably wide bore and it screws directly into the top cap. If by any chance you don’t like it you can make use of the included 510 adapter and fit any standard drip tip from your collection.

The top cap has the Iron Maiden lettering engraved on it. There was a fair bit of fuss when Hellvape showed off the first photos of the prototype since the font used was identical to that of the band, hello copyright infringement! Potential law suits and harsh words aside according to Hellvape that was only done on the prototypes and in fairness the production model has a completely different font but it just proves that there’s always some form of drama going on in the Vape industry.

As mentioned earlier the deck section is 22mm in diameter and uses the popular Velocity style post arrangement. The post holes are large  the screws work well. You can fit some pretty big builds in here if you a partial to exotic coils the only thing you need to watch out for is that your coils don’t interfere with the ceramic chamber cap which actually plugs into the deck’s juice fill holes.

The ceramic chamber serves several purposes, primarily it is designed for flavour enhancement but is also serves as it is a spit back guard and a plug for the fill holes. In addition it also splits up the airflow. All things considered it is quite an innovative idea but the one gripe I have with it is that you only get one included with the atomizer and due to ceramic being easy to break you really do need to take care.

The 510 pin appears to be silver plated and you do have to remove it so you can completely break the tank down for cleaning. Now I know this might be a pain for some folks but considering the tank holds 8.5ml of juice you won’t be doing it that often especially if you intend to fill the Iron Maiden with your favourite flavour. Assuming you aren't using a very strong flavour which might taint your tank you can also stick the Iron Maiden under the tap and give it a good rinse since those fill holes are huge and it saves you unscrewing the base. 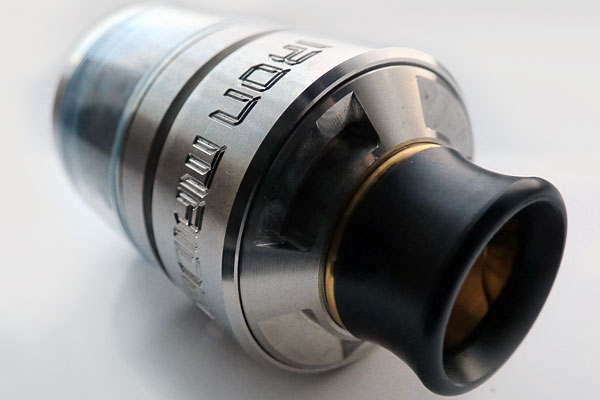 The Iron Maiden has two sets of adjustable airflow. The first is a pair of extremely large slots that can be opened up or fully closed down by turning the top cap. In essence it is very much like one on the Velocity RDA only on a much bigger scale. After air passes through the slots it meets the ceramic chamber piece which splits the airflow on each side.  In addition there are four recessed sections in the top cap which direct air downward through two slots until it passes through the numerous holes in the top of the ceramic chamber. It is entirely up to you which airflow you want to use since both can be fully closed down.

As you can imagine this is a seriously airy vape even when heavily closed down and it is really only going to appeal to lung hitting vapers who wants tons of airflow and lots of clouds. 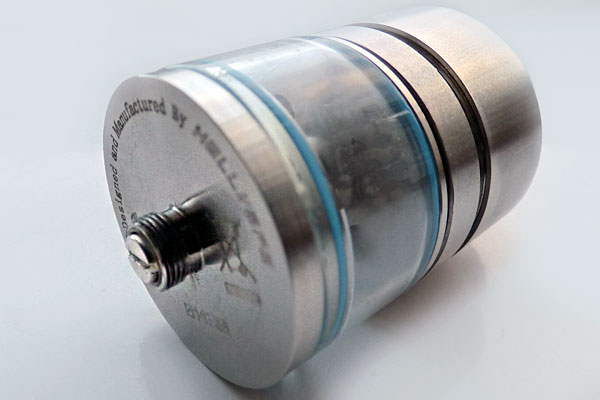 Due to its large size the Iron Maiden is actually very convenient to work with. The post holes are generous and the screws hold the wire securely. I went for a dual coil build using twisted 26 gauge wire. The coils had an internal diameter of 3mm and the final Resistance was 0.5ohm. Wicking is also very straightforward and the only thing to keep in mind is to make sure that your wicks go down far enough.

The fill holes are reasonably large and nicely plugged when the ceramic chamber is fitted but due to the Iron Maiden’s large capacity (8.5ml) it does take a little longer to fill. 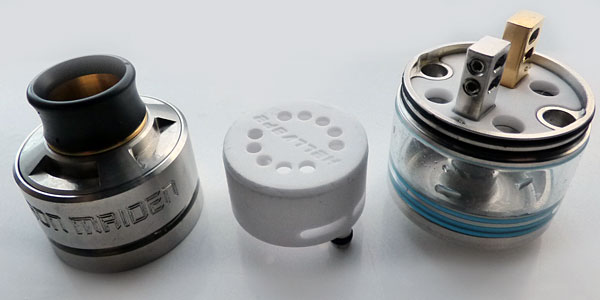 I filled up the tank with about 5ml of Vampire Vape’s Heisenberg and I left it to sit for about fifteen minutes so as to be sure the cotton was fully saturated. When I took my first vape I was very surprised by the especially crisp and clean flavour (probably mainly due to the ceramic chamber) and I could certainly pick out all of the notes in the juice.

When I finally vaped off the Heisenberg I thoroughly cleaned the tank and decided to go with a different build. This time I used two pre-made Clapton coils that had a final Resistance of 0.3ohm. As you can imagine once I started pouring on the Watts the cloud production intensified and my room got incredibly foggy. The juice I was using on this occasion was some Nasty Juice Fat Boy which is a delicious 70VG sweet Mango flavour and I filled the tank to its maximum capacity. Flavour got even better and was once more very clean and tasty which made for a very enjoyable vape and even at a fairly high Wattage it took a little time for the tank to drain. 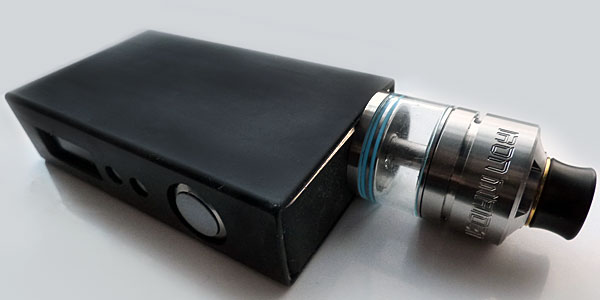 The Hellvape Iron Maiden is an absolute beast of an RDTA that offers very crisp and clean flavour considering the sheer amount of airflow. It vapes really well and puts out loads of clouds! The juice capacity is massive and might be a major convenience to users who vape a lot of one particular flavour. Given the 30mm diameter this product simply won’t look right on a lot of mods due to overhang so do make sure you have a suitably beastly mod to fit it to.

The Iron Maiden in an atomizer that is primarily aimed at cloud chasers and people who enjoy low Resistance builds, exotic or otherwise at high Wattage with loads of airflow who are very likely to love this. Assuming colossal fog bank producing atomizers with a massive juice capacity are your thing then the Hellvape Iron Maiden might be exactly what you are looking for!