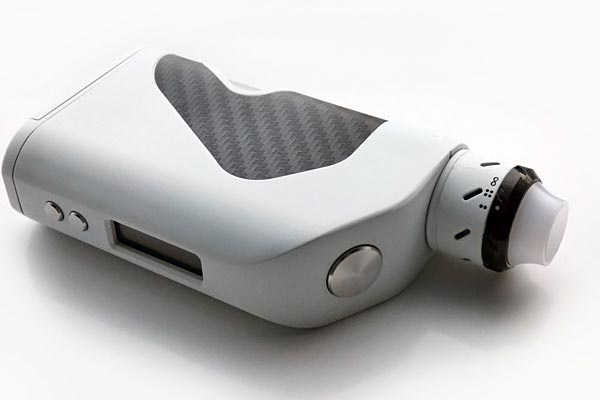 The Wraith by the Council of Vapor is an 80W Squonker that comes with its own bottom-fed RDA and is intended as a fairly low cost introduction to the art of Squonking.

For anyone who has not come across these devices before a Squonker is a mod which contains a removable juice bottle (typically about 6-10ml in size) which is connected internally to a bottom-fed RDA that has a hole through the bottom pin. The device itself has an exposed section which allows you to squeeze the bottle (squonk) and this pushes E-Liquid up to the RDA juice well thereby continually saturating your wicking material. Essentially this means you will never have to drip juice in your RDA again apart from the one time you set up your build and prime your wicks. 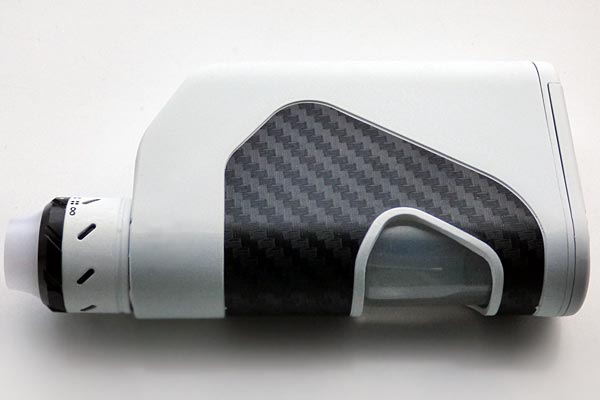 To some extent I have never really seen the appeal of Squonking and I jokingly once referred to them as the perfect product for those people who are just far too lazy to drip but in fairness I can see the advantage if you are constantly using the same juice all of the time and the design of these devices certainly does offer plenty of convenience. The thing is, I have always used RDA’s to specifically test out particular flavours or just use them when I want to chop and change between a few different juices so having an entire bottle of the same juice on tap so to speak seems a bit pointless when I could easily fill up one of my many tanks instead. I guess it’s a case of different strokes for different folks really and if you really love RDA’s and don’t change your juice that often then a Squonker might be something that is very desirable to you.

As an introductory device to the art of Squonking the Wraith is extremely well put together. The device is made from Zinc Alloy and has a really nice rubberized coating that makes for an excellent grip. The Wraith has a nice weight to it and feels very robust, the edges are all nicely rounded out making for a good form factor and the styling actually looks seriously good! I received the white and black version for review which I quickly dubbed the Imperial Stormtrooper Squonker Edition. The finish is excellent and the black sections have a really nice carbon fibre pattern to them. 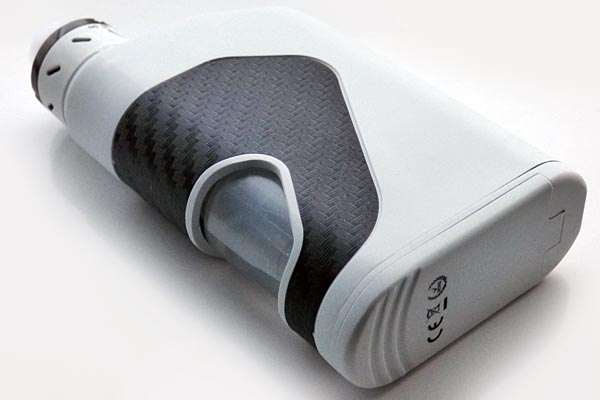 The buttons feel nice and responsive, have a good click to them and the main fire button is nicely positioned so it feels very comfortable to use when holding the device. The display is very bright and clear and shows all of the typical information such as Resistance, Wattage and Voltage. In addition the display also shows the mode it is set to and the remaining battery life.

The 510 connector is spring-loaded so you should have no issues getting your RDA’s to sit flush. The base of the device has a press and slide lid and this allows you access to the battery compartment and the juice bottle holder. In all honesty this lid is pretty much the only thing that I don’t like about this device since the battery and the juice bottle have a tendency to slide out when you open it. Ideally I think that there should have been a removable clip or a door on the side of the device for the bottle but it is what it is. The other problem with the lid is that you do need to push it in quite firmly and it can be sometimes fiddly if you don’t turn the device upside down. Nevertheless when you do have it fitted the lid is certainly secure enough. The Wraith requires a single 18650 battery and since the device does not feature a USB port you will need an external battery charger. 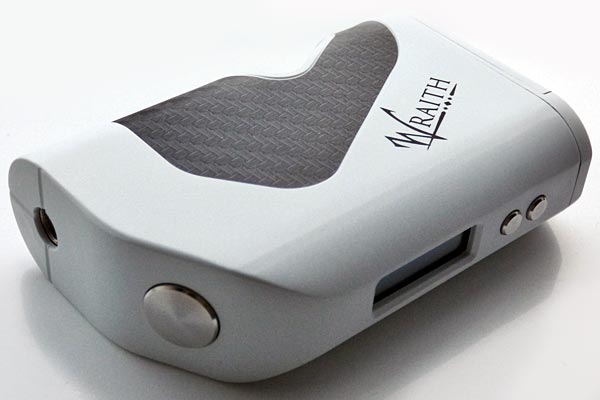 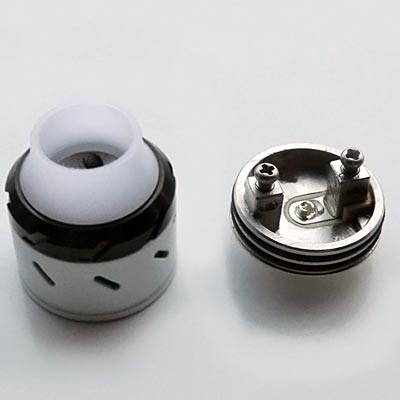 The included RDA is a bottom-fed design which means you won’t be able to use it on anything except a Squonker. It is actually rather well put together but I would suggest you lubricate the O-rings since the top cap can be a little stiff to remove. The RDA features a two post deck and does ideally require a dual coil set up. Since there are only two post holes it might be a little fiddly for some newcomers to rebuildables because it certainly isn’t as easy to work with as say a velocity style deck. The post holes are fairly reasonable in diameter and should be okay for most typical dual coil builds. I found the deck itself to be quite roomy and I had no issues fitting 3mm ID coils in there.

Keep in mind that while you can fit a single coil it is not exactly a great vape because the airflow of this RDA no matter how much you adjust it will always leave an air hole open on the opposite side and this does tend to diminish the flavour. In dual coil mode this isn’t an issue and the airflow can be heavily dialled down if you don’t want an overly airy vape.

The wide bore drip tip is made from Delrin and it is sloped in design very much like the one on the Royal Hunter RDA and it is very comfortable on the lips when vaping.

The only thing I would suggest is that you do make sure the lid on the juice bottle is completely secure and that it is firmly attached to the inside of the device. 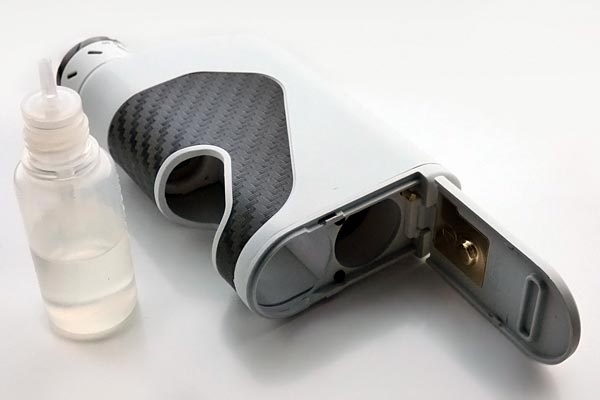 I did actually try the RDA out with a single coil set up and like I said earlier the vape was less than ideal due to the airflow configuration. In some respects it is a shame the product limits users and personally I would only recommend this device if you are comfortable building dual coils or if you plan to use your own bottom-fed RDA that has a single coil option.

In dual coil mode the RDA really shines and puts out a decent amount of vapour with some really nice flavour! I was using This Juice Twista which is a pineapple and lime flavoured E-Liquid and I got a really enjoyable vape. While I don’t think I would ever purchase a Squonker myself I can certainly see the appeal since you simply have to squeeze the bottle a couple of times to quickly deliver E-Liquid to your RDA when you notice the flavour diminishing as your wicks dry out. Considering the bottle holds about 10ml of juice I suspect your battery will run out long before your juice does but it will depend greatly on your particular set up and the Wattage you vape at. 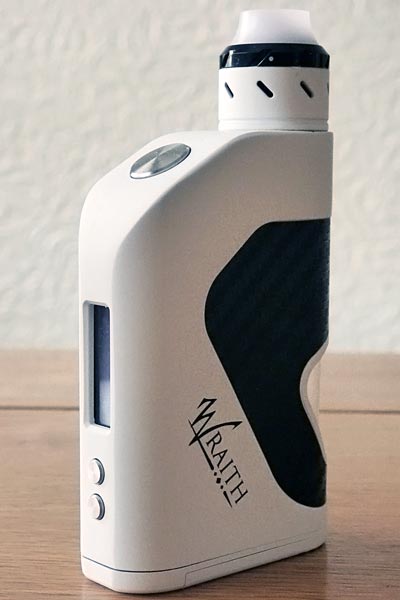 Speaking of which since the device only requires a single 18650 battery don’t be expecting to vape at 80W all day long because it will drain very quickly. The Wraith is really aimed at more modest users and providing you aren’t pushing more than 40-50 Watts you should get a few hours of use out of it before having to replace the battery.

I had no issues at all in Variable Wattage Mode and to try out the Temperature Control functionality I was hoping to be able to find the bottom-fed kit that for some strange reason came with my Origen V3 RDA when I purchased it but after a long search I couldn’t find it. Having no other bottom-fed RDA’s I had to set up a quick Ni200 single coil in the Wraith’s included RDA which to be honest wasn’t ideal but it did allow me to see if the Temperature Control function was working properly. In my opinion it worked fine despite there being too much airflow in this particular RDA and it did detect when the wicking was drying out. I noticed no weird issues such as temperature spiking, Resistance fluctuation etc.

One thing you do need to keep in mind is that while the device itself won’t leak the RDA certainly will if it is full of juice so make sure you vape off any E-Liquid before carrying the Wraith around in your pocket.

All in all despite Squonking not really being my thing I enjoyed the time I spent using the Wraith and despite some limitations in terms of battery life and RDA airflow options I thought it was a really good product!

In my opinion the Wraith is a very well put together and nice looking product that is a relatively low cost option for those who are interested in trying Squonking for the first time. The device works without issues and is very straightforward to set up. Personally I do think that the included RDA could be a bit better (more flexible) but as an overall starter package it is acceptable enough and you can always buy yourself a different bottom-fed RDA later if you want to.

If you are on the lookout for a first time Squonker set up this is definitely a good device to pick up.