IVG have added a few more flavours to their nic salt range. Since I really enjoyed the last lot, I was more than happy to give these new ones a try.

They sent over six new ones to try: 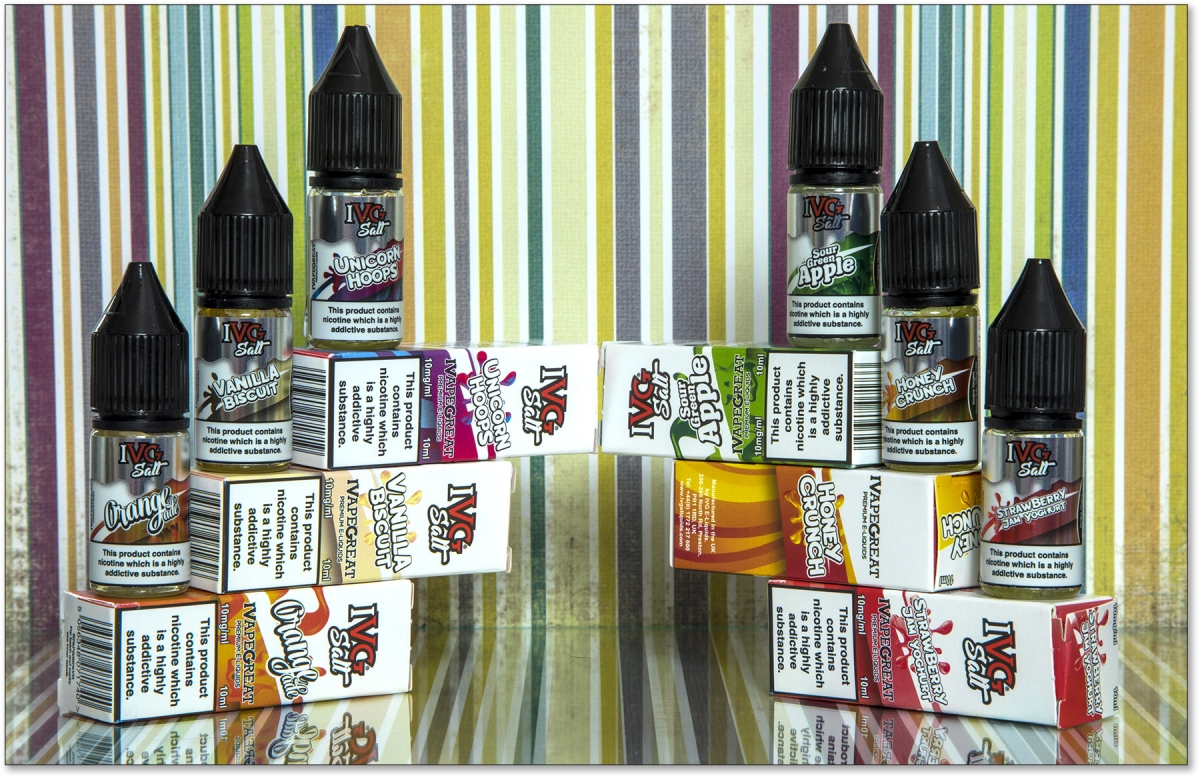 Similar to the rest of the range, IVG tend to stick to traditional flavours you’ve heard of and generally you get the idea of the flavour profile in the name. The only exception for me was the ‘Unicorn Hoops’ as I have no idea what that is, I’ve tried Unicorn Poops but the aftertaste was a bit nasty!

I chose the VooPoo (2 poo mentions already!) DRAG Nano 2 pod to test these out and I had a fresh pod for each flavour. The DRAG Nano 2 was the perfect choice for juice testing as the flavour is faultless.

The nic salts come in two strengths; 10mg & 20mg, and are individually boxed. The metallic bottle label has a peel open corner to reveal the entire health and safety blurb underneath.

So onto how they tasted. As usual, this is my personal opinion and flavour is subjective, but I can tell you that all of the flavours are good quality with no chemical aftertaste or harshness on your throat, IVG tends to be a brand I trust for juice quality.

Orange sounds simple but it's a tricky one to get right in e-liquid, most I have tried can be a bit harsh and overpowering. IVG’s approach is to add a hint of ice to give that fizzy drink taste which works well and they have sweetened it to make it a smooth orange flavour overall. The end result is a rather nice orange that I would happily use as an ADV (All Day Vape).

"Refresh your taste-buds with the taste of crisp, sour green apples on the inhale and a sweet fruity kick on the exhale"

I don’t do ‘sour’ and this one would be the last one I would pick off a shelf as I hate that cheek clenching effect like a bulldog licking p*ss off a nettle, but in fairness I had to try it out and I was pleasantly surprised. I’m not sure I would class it as a full on ‘sour’, but it does have a tang to it similar to a sweet cider. It’s quite sweet and the apple flavour is clear, I did manage to polish off all 10ml but it isn’t one for me

"Enjoy the sensation of golden honey, layered over a crunchy cereal blend, perfectly wrapped with a dash of creamy milk"

Honey? I don’t think I’ve ever tried an e-liquid with honey in the profile. This is based on the loops cereal, and it is just lush and well balanced. The biscuit and cream tones make it such a smooth sweet flavour, this might just be the best cereal nic salt I’ve tried so far. It is possibly too sweet as an ADV, but definitely one I will be buying more of.

"Enlighten your taste-buds with a light taste of marshmallow, entwined with fulfilling cereal sensation, finished off with a splash of milk making it a delicious breakfast blend"

Ah I get it now, Unicorn Hoops must be based on a cereal but I’ve not heard of it so I relied on the description for what to expect. Marshmallow pretty much sums it up, and boy have they nailed that flavour! It really leaves a ‘gob full’ of marshmallows experience. I wasn’t quite getting much of a ‘cereal’ biscuit taste on the inhale, but it came through on the pleasant aftertaste. It’s a very sweet one overall, but still enjoyable and is a treat flavour rather than an ADV.

Fair play, IVG have also nailed this one, it remind me of one of those fruit corner yoghurts where you mix the strawberry into the yoghurt as you get a more intense strawberry flavour, nice and sweet, smooth yoghurt/creamy inhale and aftertaste, I really liked this one but it was a bit too sweet for an ADV but a nice dessert treat.

"A classic biscuit taste complimented with a smooth custard filling, tasty enough you’ll want to enjoy with a cup of tea!"

I’m trying to recall what this vanilla base reminds me of, custard cream biscuit wouldn’t quite do it justice as the flavour is nicer than that. There’s a clear vanilla tone, and custard comes through which smooths it out, but the biscuit seems to have a bit of flavour closer to a cheesecake. I’m going to call it vanilla cheesecake rather than biscuit as it is closer to a sweet dessert. Another treat one for me.

Along with all the other flavours in the IVG Salts range, these six new flavours give you quite a good selection. I’m pretty impressed with almost every one I’ve tried in the range and I’m a fussy sod, meh or rank cheapo juices either end up as sink-fodder or are put at the back of my stock for emergencies only, but the IVG stuff goes at the front of my stash.

In a nutshell; if you recognise the name on the label, then you should get a flavour you expect and a quality blend, but they are on the sweet side overall, but personally I prefer them that way.