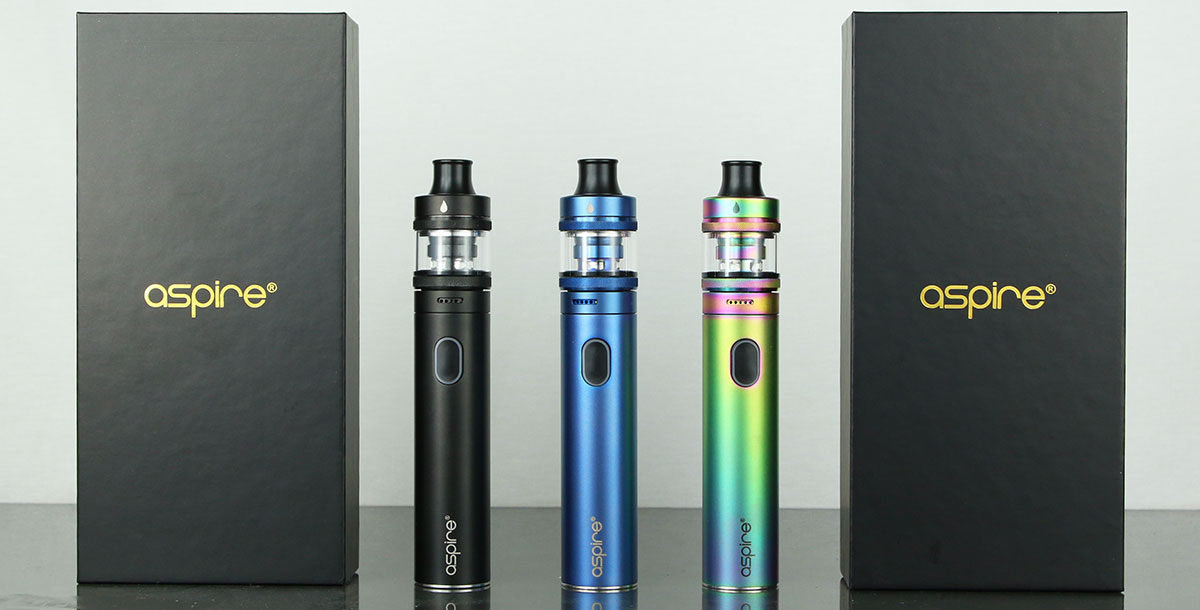 Aspire have been around for as long as any of us have been vaping. Going back as far as 2014 when I first started, it was the Aspire Nautilus that really got me off smoking and I have never looked back.  So as a result, whether it be the Cleito, Atlantis, the terrible Triton etc I have always been a fan.  So I was excited to see what Aspire had come up with for their next new release, they didn't disappoint and they have kicked off their 2019 with probably one of the most interesting products of the year so far.  So without further ado, let's get into the Aspire Tigon kit.

Included in the Tigon kit box you will find: 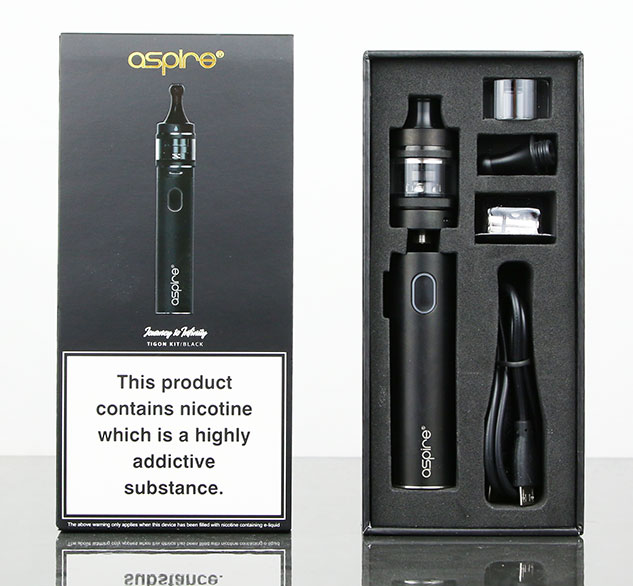 About the Aspire Tigon

The Tigon name derives from the cross between a tiger and lion.  Quite odd until you look deeper into Aspire's new kit and notice that the name is quite apt.  The sales pitch for the Tigon is that it offers both a Mouth to Lung (MTL) and Direct to Lung (DL) vaping experience from the same kit.  It's pretty impressive to be honest that they have aimed for that, get the best of both worlds is no mean feat!

The mod itself is an 1800 mAh internal battery (2300 mAh outside EU) with charging time around 90-120 minutes which is completed via the USB cable supplied. The mod comes with a front oval fire button backed by a purple coloured indicator light design and back USB charging port.  The device itself is around 24mm in diameter to house the tank on top. 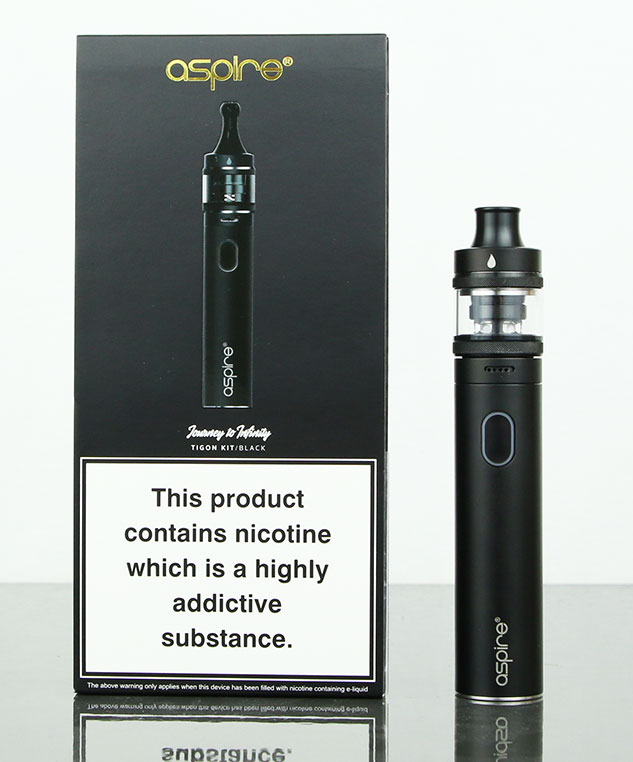 The Tigon tank comes with a 2ml (3.5ml outside EU) capacity tank that is around 24mm in diameter.  It has bottom adjustable airflow and top fill mechanism that is used by lifting the top cap and then sliding back.  It comes with 2 different styles of drip tip - one for each way of vaping - and the coils come rated at 1.4 (MTL) and 0.4 (DL).  Power through the coils is around 14W for the 1.4 ohm and 20-25W through the 0.4 coil.

The most interesting thing though is the way the tank works, with its self-seal technology.  Not a brand-new idea but the top fill hole has a cover to prevent leaking from the top and the bottom also which allows the coil to be removed even when the tank is full.  The coil simply pushes into the tank and the bottom cap is screwed on rather than into the base as normal.

From this point out, I am stepping out the vaper that I am today and the me from 4 years ago is stepping in!  The reason being is that this product is not aimed at experienced vapers so to give it fair coverage I want to look at it from the viewpoint of its target market.

The first thing I will say is a fantastic feature of the tank is the easy to use switching of vaping styles.  The idea behind switching is great in itself but the simplicity of it is something else entirely.  Simply swap the coils around, swap the drip tips around - which will take you around 20 seconds - and you have effectively changed your vaping style with the Tigon kit.  So if you ever want to switch up your vape for more power for example, this can be done with extreme ease!

The flavour I get from these coils is quite nice in all honesty, the DL gives a little bit more intensity with the greater airflow and higher power, but both served up my tropical liquid up nicely with a a strong, crisp taste. I'm impressed by this fact as well, most MTL coils tend to me mute the flavour more in my experience.

The battery life on the mod is fantastic - even with the EU version which has a lower capacity.  Using the device in MTL mode you will get all day out of it and the quicker charging time gets you back vaping quickly, the mod performs really well to that extent.  The button is nice and clicky with a bright indicator light that is almost visible in daylight, so a positive there for me as well.

The device is solid and light so perfect to carry round with you, and the leak proof system prevents accidents in your bag or pocket.  The fact that the tank is leak proof in itself is fantastic, it really adds that little bit extra to the overall kit knowing that it won't leak liquid out at any point.  Vapour production from the kit is solid at the lower power level and the coils do perform with plenty of life left after a week and a half of usage each - it's fantastic to see Aspire are still producing good quality coils.

This is the part where it gets interesting because the biggest pros of the Tigon lead to its biggest flaws...  Starting with the one that for me is more of an annoyance than a flaw - the leak proof style makes it almost impossible to naturally replace any liquid in the tank without forcing it out the top.  So, while it is perfect when in use, the leak proof style is not so great if you don't particularly like the flavour that you are vaping on.

The next downside for me was the paintwork on the device - it isn't very scratch resistant.  The chances are that you will occur a fair few scratches on the device over a period of time through carrying it a pocket or bag with keys or change or whatever, so although it looks nice initially it has the potential to look a bit beaten with prolonged use.

Some people may find the coils are a little too airy, I did personally and felt that this was a fallout from the hybrid system.  Even with the airflow closed off it felt to me as if the tank still had more airflow than a Nautilus for example, so that is something to bear in mind.  I would even argue there is a tad too much airflow for the DL set up and it gave its best vape at half closed for me.

The final one for me is the lower battery for EU vapers, I have no idea why a reduced battery power option is being given to us as this is part of the TPD restrictions as all.  I can understand the tank being smaller but rolling back the battery seems an odd decision for me and the kit would have only benefitted from the added capacity.

The Tigon Kit is something that from one perspective may come across as an underwhelming release from Aspire.  If you want a big cloud making kit this won't be for you - nor will the slightly airy MTL coils neither.  I don't think the intended audience is for vapers like myself which is why I wanted to look at this from a different perspective.  For someone who has recently started vaping however, or is looking to quit smoking, then this kit could be ideal for them.  It offers an all in one kit that allows them to naturally progress from MTL to DL on their own terms and offer a quality product in the process.

The Tigon isn't the best MTL kit out there, you can argue Aspire owns that space already, but the overall feel of the kit is that for someone starting out, new vapers could get a lot of love from a kit like this.  It offers a nice tasting vape, it's simple to use and the leak proof style to provide confidence in their vape compared to a leaky alternative.

Aspire have come out with something rather different to the others on the market and to the right person the Tigon could be ideal! 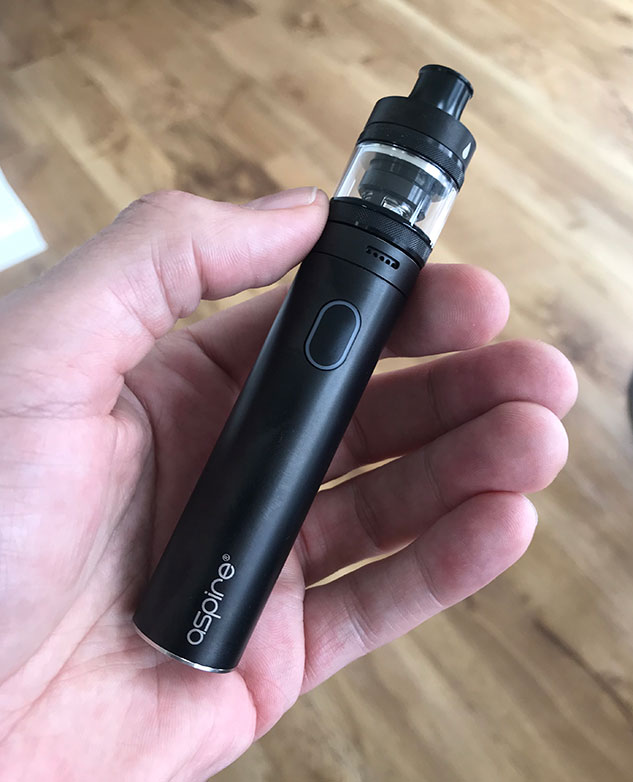