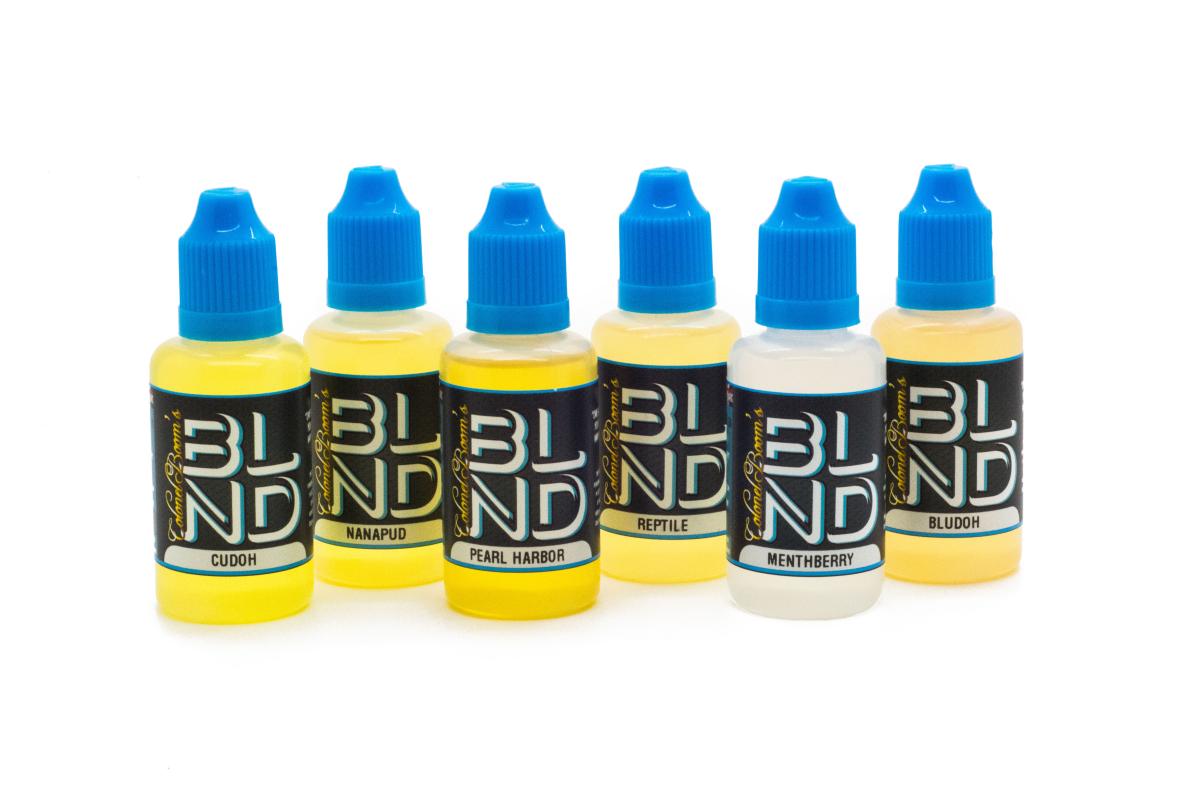 Colonel Boom’s, the guys behind the phenomenal Colonel Booms Bang Bang Juice and Fallstreak e-liquid ranges, are back with an exciting new product known as BLND- a range of one shot concentrates that can quickly and easily be mixed up from the comfort of your own home.

BLND has a simple concept at heart, with multi-layered flavours on offer, with all the trial and error behind them having already been performed in the Colonel Booms mixing laboratories. These then become what is known as ‘one shot concentrates’, making mixing up delicious concoctions a lot easier for the homebrewer. BLND will also be used as a test bed environment for future Colonel Booms and Fallstreak e-liquid releases, so some of these BLND concentrates may be on shelves in future ready to vape, but under the Colonel Booms or Fallstreak labels. They come in 10ml as well as generous 30ml bottles, which when mixed up with your desired base is enough to keep you going for a long time indeed!

Please note these are flavour concentrates, which means they cannot be vaped straight out of the bottle, you will need to add the concentrate to your desired PG/VG ratio and nicotine strength. The suggested mix percentage of the BLND concentrates I reviewed below is 20%, however as with any concentrates you can experiment to your liking, which is one of the great benefits of mixing your own e-liquids. A handy mixing calculator is found on the Colonel Boom’s website (aptly named the Mixulator!), which will make it easier for you to calculate what you need for your own mix. The BLND concentrates I have reviewed below were mixed to a 60VG 40PG ratio so that they can be enjoyed in just about any style of atomiser, at 6mg nicotine strength, and steeping times have varied per concentrate... 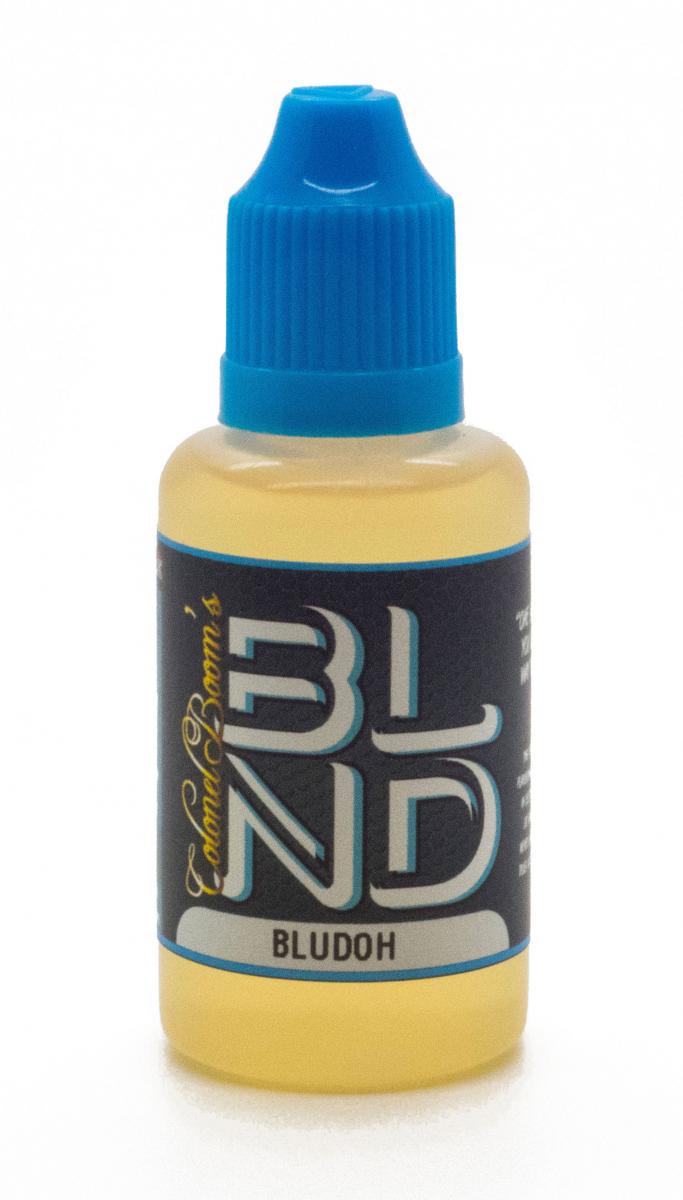 Wild blueberry flavours are mixed into a small portion of a sweetened jam to give a realistic fruit running throughout this flavour. The main flavour is a freshly made doughnut with a light sugar glaze and within it you get all of the yummy rich bakery notes you would hope for…

I found that BluDoh presented a near perfect representation of a fresh, glazed blueberry doughnut, and mixed at a 60VG 40PG ratio this provides a sweet blueberry inhale which gives way to a sumptuous glazed doughnut, which gives that mouth feel of biting into a freshly baked blueberry glazed doughnut. At the recommended ratio of 20%, the flavours all combine together perfectly, giving me one of the best blueberry doughnut liquids I have tasted so far. It’s been expertly mixed as you would expect from the Colonel Booms team! 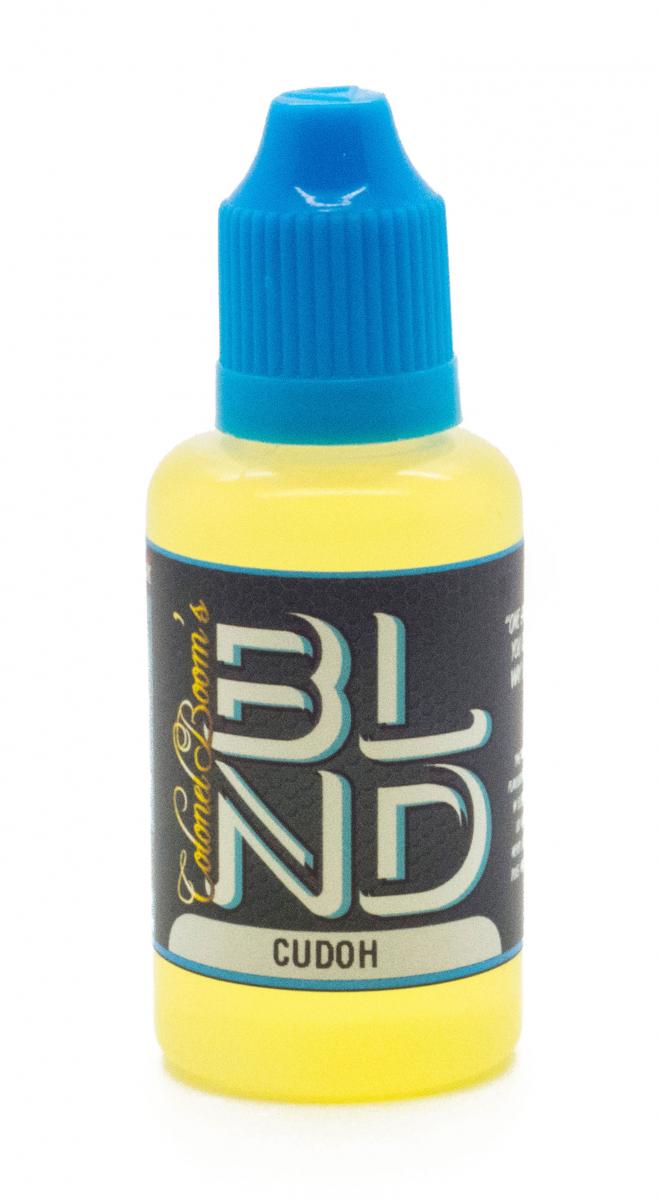 Vanilla custard is remarkably popular and for great reason, as a dessert it is easy to get along with. The light yet mouthwatering vanilla plus creams are an incredible combo to BLND with other flavours and with our rich and flavoursome glazed doughnut even more so. The custard gets you almost instantly and with very little delay the bakery flavours of the fresh doughnut come right in. The glazing on the doughnut adds a touch of sweetness throughout but only enough to keep your tastebuds asking for more...

I must say that after first hearing about the BLND range and reading through the flavour descriptions, being a big fan of custard doughnut CuDoh was the concentrate that I was most eager to get my hands on. Needless to say, I wasn’t disappointed in the slightest, it’s a masterful mixture that gives you a smooth and creamy vanilla custard, that I’d happily vape on its own, and the delicious thick glazed doughnut flavouring binds it all together. I did note that as the longer CuDoh steeped, the thicker the vanilla custard element got, making it even more delightful! 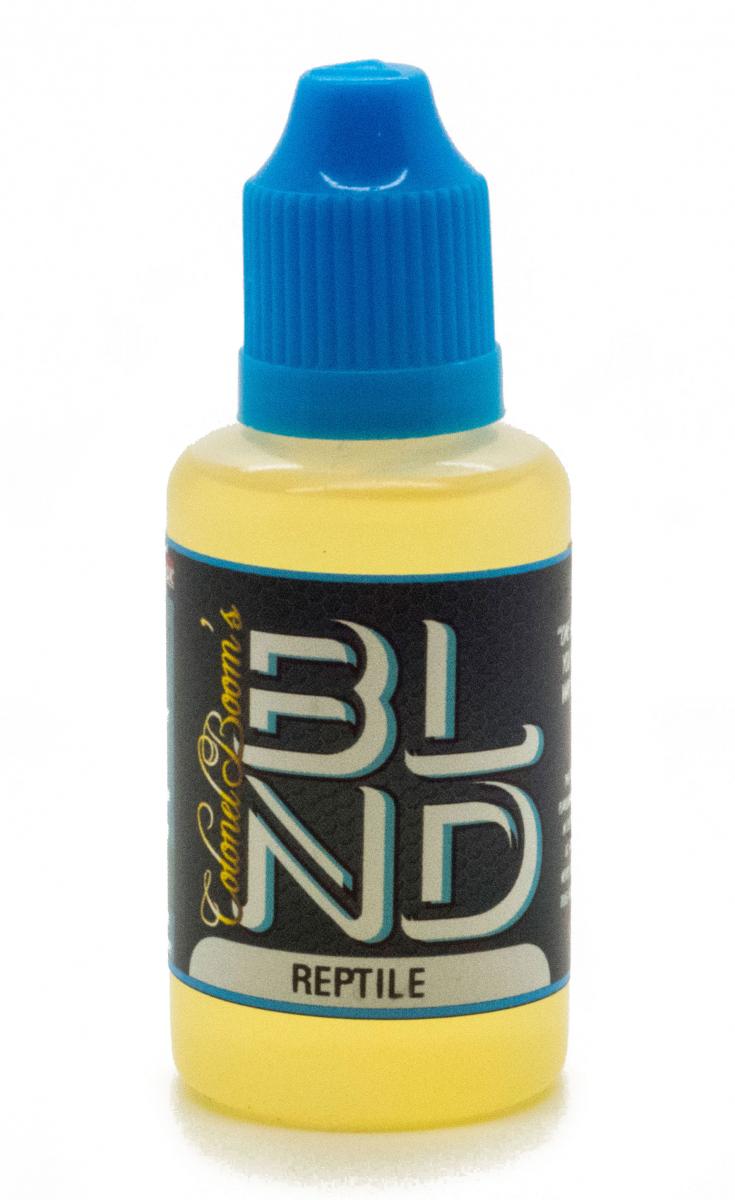 Dragonfruit seems a very underused flavour, we use it as our primary flavour in Coup D'Etat from the Colonel Boom's range and it is a flavour people love. Strawberries are universally appreciated too and the flavour profiles of the two fruit are a match made in heaven. To bring everything together and create an ultra smooth base we combined light creams and vanilla's with a hint of vanilla custard to deliver a rich and rounded one shot with plenty of layers of interest to go at.

Coup D’Etat by the Colonel Booms team is an absolute classic eliquid, rating amongst my all time favourite fruit based vapes, so I was really intrigued as to what Reptile had to offer. I definitely picked up on the dragonfruit and strawberry on the inhale, which are very prominent throughout, and the vanilla cream that creeps in takes the edge off of the bite from the dragonfruit. You do pick up a very cheeky little hint of custard on the exhale, a masterful touch added to a mouthwatering mixture of fruits and creams! 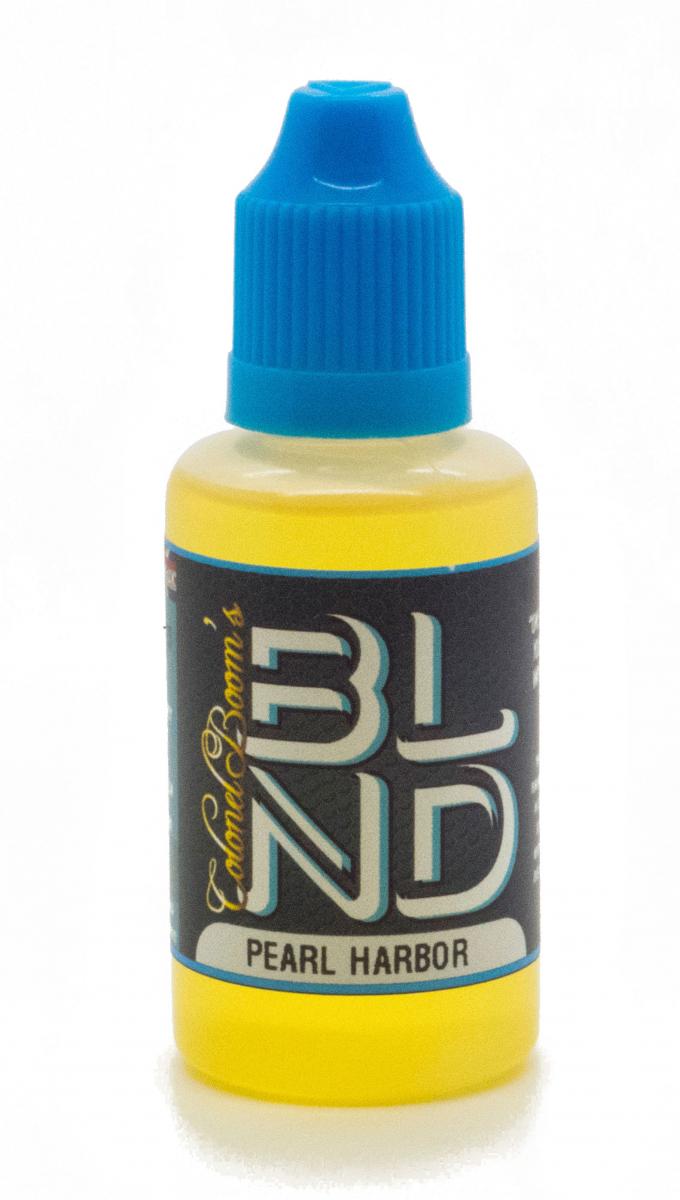 We get asked to do a custard quite lot so rather than yet another of the same we made a custard inspired by the islands of Hawaii and their dish Haupia.

Rich and smooth vanilla custard is the central flavour that binds the entire recipe together and yet is not dominating the juice. Bringing a smoothness with it we have an incredibly realistic and luxurious coconut and have added a hint of caramel to bring in a touch of sweetness and an additional layer. Balancing the flavours, the unmistakably tropical taste of pineapple keeps things a little bit different and follows the Colonel Boom theme of a top end note of fruit...

Pearl Harbor was one of the most unique custards released in the original Colonel Booms range, and it’s now available in concentrate form as part of the BLND range to mix up yourself at home. To this date, I’m still yet to try a custard that is as unique as Pearl Harbor is. There’s a whole world of flavours going on here, which keep your tastebuds guessing, and different builds in your atomisers will bring out different flavours from this complex yet delicious concoction. Coconut and custard really shouldn’t work together, but in Pearl Harbor they most certainly do, and the creamy caramel helps to bind these two together. Pineapple comes in to finish this off, and give it a wondrously exotic twist! 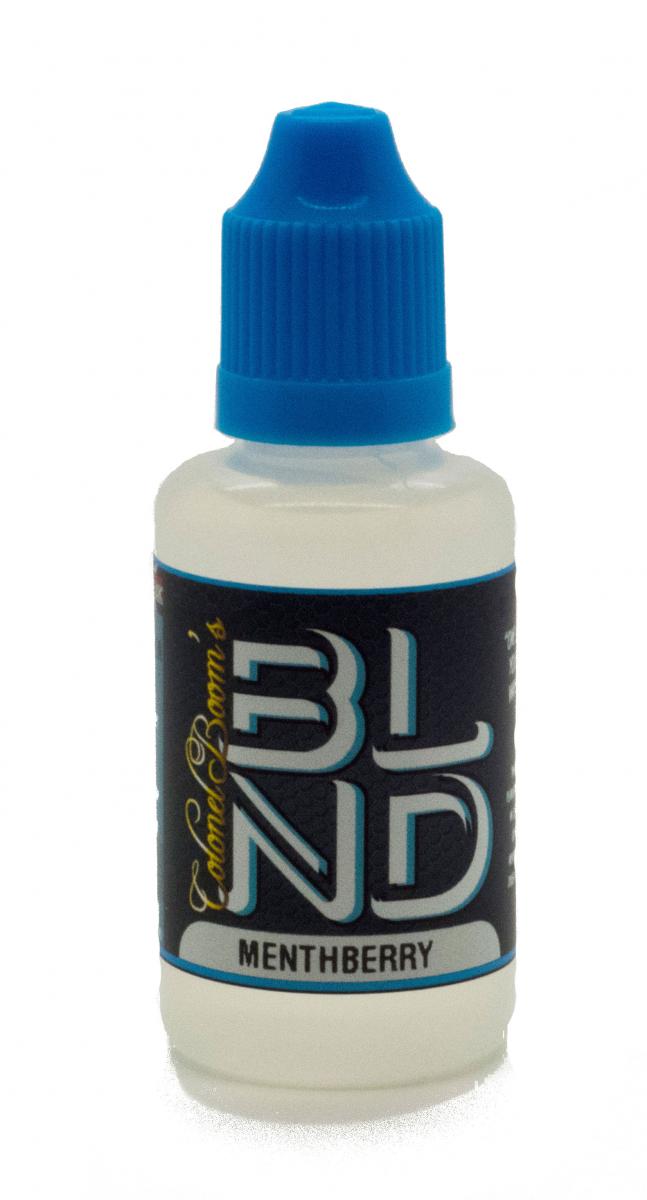 Not so strong that it takes the wind out of your sails when you take every puff, the menthol in MenthBerry is kept deliberately balanced to deliver refreshing cool menthol on the inhale, with the sweet berry fruit blend developing straight away. Strawberry hits first and then raspberry follows it up whilst the sharp kiwi enhances the notes of the main fruit rather than becoming dominant. Right at the back you get the subtle taste of blueberry- and then it’s time for more!

MenthBerry provides one hell of a tasty palate cleanser, you won’t be suffering with vapers tongue ever again with this at hand! There’s a tasty fruit concoction of kiwi, raspberry, strawberry and blueberry, all flavours identifiable easily, and there’s a perfectly balanced menthol that keeps your tastebuds invigorated, as well as providing a nice and fairly sharp throat hit too. 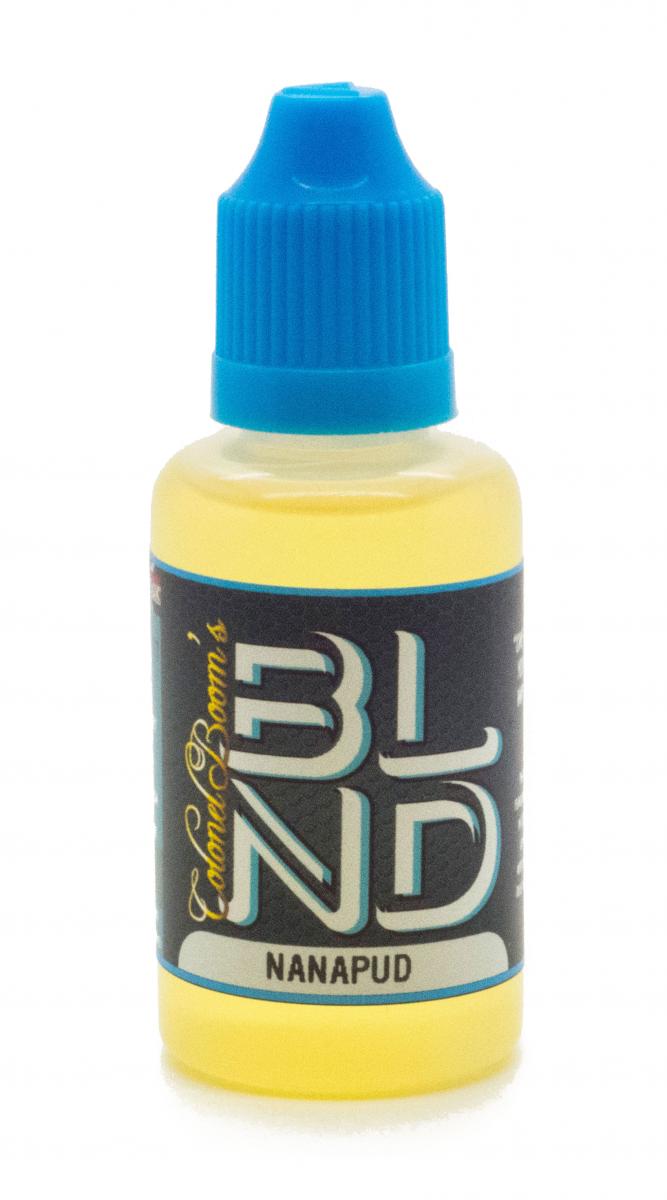 A simple banana pudding, so easy to vape at any time of the day with its BLND of fresh ripe bananas, a thick and delicious creamy custard style filling and a hint of something biscuity and sweet to hit every part of your tastebuds. On the inhale you get the full power of banana, this is no shrinking violet. As the banana flavour coats your mouth the creams start to take centre stage and give a fullness to the fruit pudding. As a finish you get a little hint of sweetness from the biscuit that binds with the banana and brings it once again to the fore…

Nanapud is a simple flavour combination, as per the description, however it is executed so very well. There’s authentic tasting fruity banana present, which is the most dominant flavour note that I found, and a thick and tasty base that comprises different creams and a hint of biscuit thrown into the mixture. It’s one you can shake and vape if you so wish, however this really does improve with age, with a sweeter and more authentic banana developing, and more of those tasty creams coming through!

The BLND range allows you to mix premium quality eliquid from the comfort of your home, at a fraction of the cost of pre-mixed eliquid. These don’t possess particularly long steeping times either, meaning that you don’t have to sit around and wait to enjoy what the BLND range has to offer, however your patience with steeping these will pay off as they just seem to get better and better the longer they are left.

Up until recently I had tried a few one shot concentrates, which weren't bad but certainly felt like they were lacking something, but BLND has totally changed my perception of one shot concentrates, I felt these were of absolute top quality. All of these concentrates offer that trademark Colonel Booms quality, with excellent blends present throughout!

Keep an eye out on the review page here at POTV, as the Colonel Booms team have been hard at work on new flavours for the BLND range, which I shall be reviewing shortly!

Many thanks to Leigh from Colonel Boom’s for sending the BLND range in for review, BLND is available from plumeblu.co.uk, www.mixshop.co.uk, www.vapor-z.co.uk and www.chefsvapour.co.uk 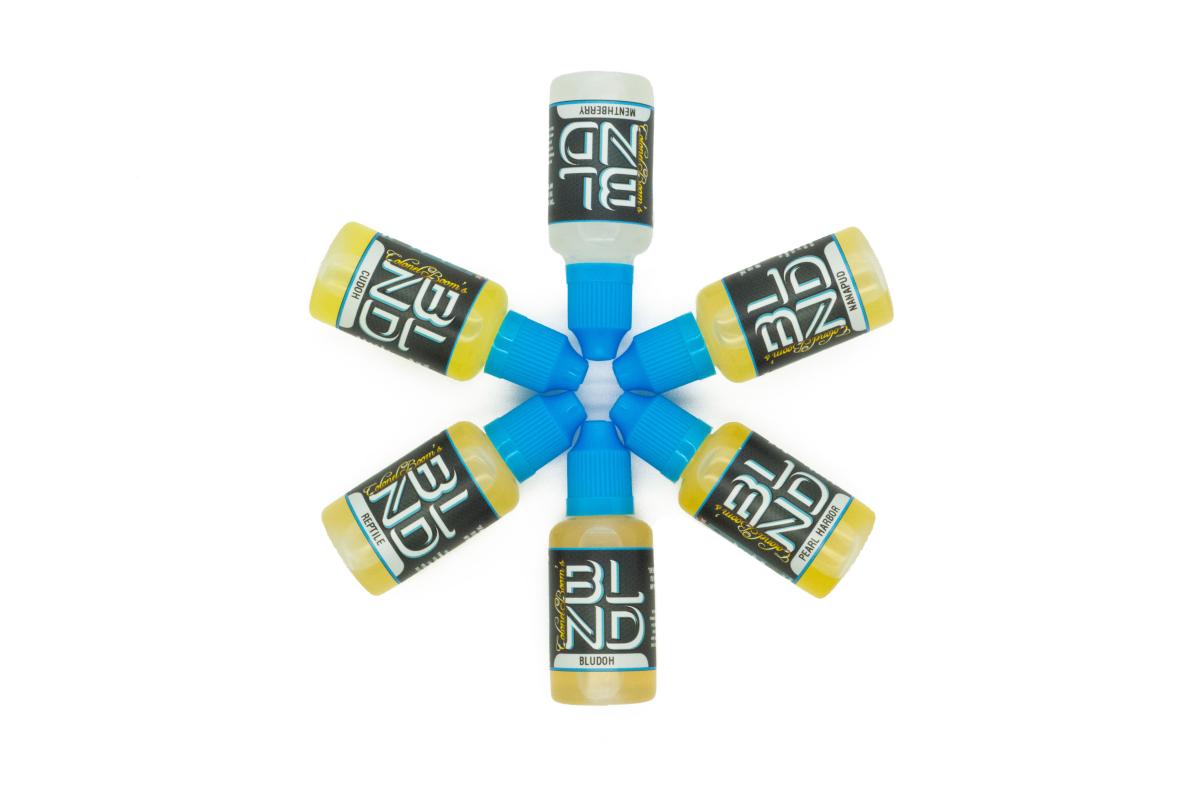