How Do We Move On?

In America, 34 million people smoke and around 480,000 deaths each year are attributed to smoking and yet, despite zero deaths caused by vaping and 4.3 million smokers successfully quitting tobacco the country is making vaping harder to do. In Australia, the tobacco control lobby has taken on a level of fanaticism not seen since the Spanish Inquisition in the 15th Century. Are they all simply misguided, or is the answer a lot darker?

Depictions of ouroboros (a snake or dragon eating its own tail) have been used through the ages to depict cycles, be it of life or process. It would be fitting to think of them in terms of scientific inquiry; a hypothesis built from current knowledge, testing, then data analysis leading to a conclusion – which then feeds into the next hypothesis. Knowledge is gained, assimilated and put into use.

Except for a slight problem.

As IFL explains(1), “sometimes snakes will go full-on ouroboros” and it isn’t about self-renewal or cycles of life.

“If snakes get too hot, they can become confused and disoriented. They also get a ramped-up metabolism, causing them to have a false sense of hunger and a desire to eat the first thing they see. As captive snakes typically live alone and food isn’t routinely consistently available to them, they end up attacking themselves.”

We are witnessing the tobacco control movement in a state of ouroborosis, if this fictional word suffices for the analogy. Rather than take on board the spectacular successes witnessed in the United Kingdom, authority figureheads are attacking anyone who fails to toe the party line – be they academics, politicians, or the very members of the public in whose interest they are meant to be working for. 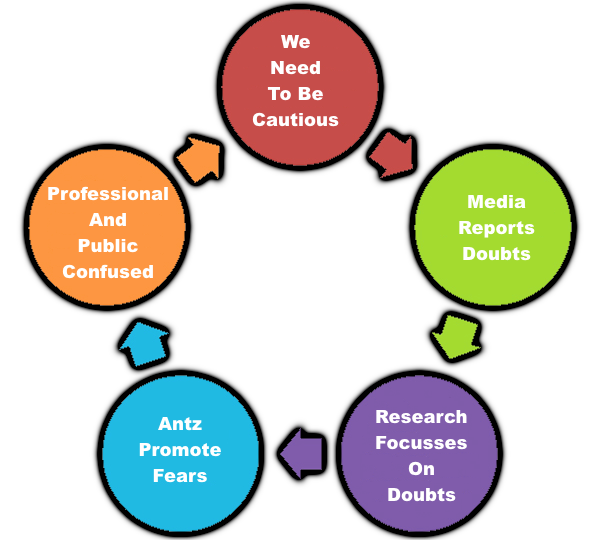 Rather than embarking on a positive cycle of discovery, America and Australia appear to be locked in to a negative feedback loop that began when the first voices misapplied the precautionary principal(2).

The European Parliament’s Think Tank defines it: “The precautionary principle enables decision-makers to adopt precautionary measures when scientific evidence about an environmental or human health hazard is uncertain and the stakes are high… To some, it is unscientific and an obstacle to progress. To others, it is an approach that protects human health and the environment.”

Politicians heeded words of caution in the beginning, worried words were spread in the media, researchers produced findings in keeping with the prevailing mood to ensure future funding and media coverage fuelled the process to go around another time.

Consequently, we end up in a position around a decade down the line where Australian MPs are getting hot under the collar and demanding pharmacy-only e-cigarettes and liquid nicotine(3).

Senator Stirling Griff told the Senate: “The tobacco industry has a vested interest in promoting e-cigarettes.”

It’s blindingly obvious they do, but then it isn’t the only industry promoting alternative nicotine products. Plus, if cigarettes remain on sale, then what precisely is it they want from tobacco companies? To shut up shop? To place millions around the world into unemployment queues and deny dividends to pension funds?

Well, some would argue that the evidence coming out of the United Kingdom is very robust. Only last week we witnessed PHE repeating claims of efficacy and relative safety(4). This was accompanied by news from Action on Smoking and Health that there is still absolutely no evidence of a gateway effect or crisis with non-smoking teens vaping(5).

Senator Rachel Siewert added: “It is very clear that Big Tobacco have an agenda here; otherwise, they would not be involved. Anybody who thinks they have the health of the community at heart has rocks in their head.”

But what is motivating Griff and Siewert? Do they genuinely have the health of the community as a priority? Last week, Planet of the Vapes has already reported that the result of Australia’s blinkered approach has been the steady growth of a black-market economy(6) – and in a black-market you have zero control over the contents of an eliquid.

Michelle Minton has recently produced another impressive essay(7) in which she makes the case for science, based on Joe Biden’s frequent calls to “believe science” over COVID-19.

“In the beginning, concerns raised by groups like the Campaign for Tobacco-Free Kids, the American Lung Association, and the World Health Organization sounded reasonable. More research was needed,” she states.

As positive studies were published from the UK and the rest of the world, “None of that has tempered the opposition to e-cigarettes. On the contrary, the more science has invalidated early fears about e-cigarettes, the more fanatical opponents have become.” 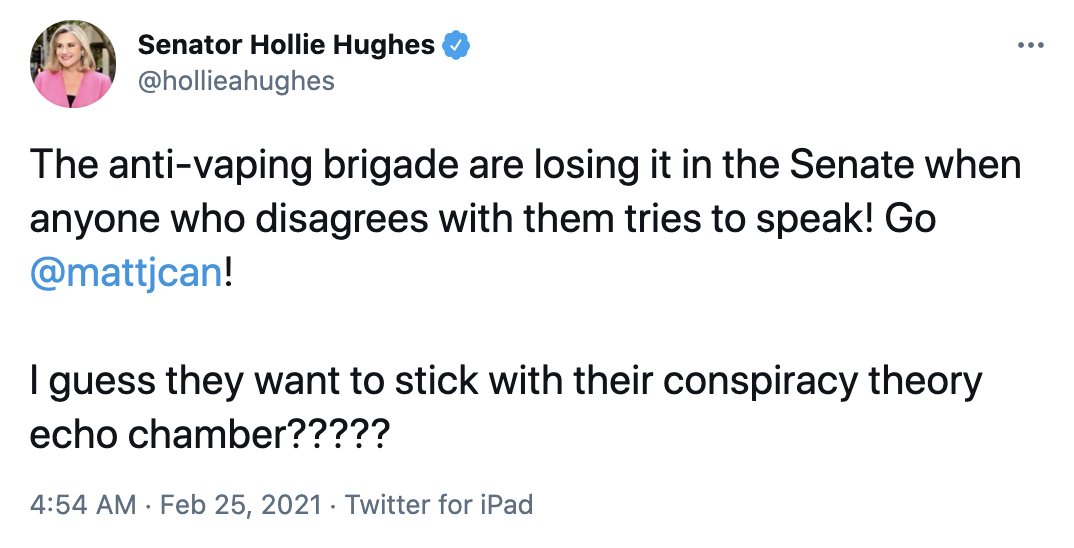 The negative feedback loop’s draw was strong. Once the USA had confirmed its direction of travel, Canada and New Zealand began to slip and Australia’s voice was amplified by a network of Michael Bloomberg organisations.

“There is enough evidence on cannabis’ relative safety and the harms caused by the drug war for these lawmakers to endorse legalization over criminalization. Yet, even though the research literature on e-cigarettes is arguably more robust than for cannabis, these same lawmakers continue to push for increasingly restrictive rules that would criminalize the sale, distribution, and possession of most—if not all—nicotine vapor products.”

The bans and limits have ramifications beyond driving ex-smokers back to tobacco or the unregulated black-markets. As Clive Bates points out(8), Matt Ridley spoke last year on the origins of innovation: “The main ingredient in the secret sauce that leads to innovation is freedom. Freedom to exchange, experiment, invest and fail; freedom from appropriation or restriction by chiefs, priests and thieves; freedom on the part of consumers to reward the innovations they like and reject the ones they do not.”

The blocks to sales, the curbs on nicotine content, reducing tank capacity all restrict the ability for the market to produce better and safer products. The boom in vaping in the (initially) self-regulated UK market produced better functioning tanks, better performing mods, and more popular e-liquids. The market thrived because it was consumer driven – and a record drop in the number of smokers was recorded.

Clive echoes this article’s underlying question: “Despite this promise, thousands of well-funded and dedicated tobacco control activists and academics oppose these developments. The question is, why? What is driving this opposition?”

He is less disposed to the belief that people are acting with the best of intentions: “We should start by considering if the opposition is grounded in a legitimate analysis of public health objectives and an imperative to do the right thing. I believe we can dispose of this explanation quite quickly. If that were the case, we would see much more intellectual energy consumed over trade-offs and agonizing over the likely unintended consequences of policy proposals.”

Whether the problem is misdirected concern, the influence of money, the need to cement authority or a warped hatred of an industry, it is clear that tobacco harm reduction is under sustained and punishing attacks that are making smokers scared and costing lives.

Maybe the solution is to stop focussing on what drives the opposition to rail against tobacco harm reduction. For whatever their reasons, the snakes are consuming everything in front of them. A more pressing question we may need to answer is how do we change this? How do we win hearts and minds? 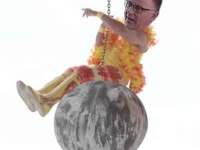