To complement the release of their new 75W and 150W mods with temperature control Sigelei released the Elite tank. In next to no time at all, in fact I think it is less than a month we now have the Elite II tank.

This tank uses nickel coils and is designed to only work on mods that support temperature control.

My only gripe with the contents is that Sigelei should have included a warning stating that one of the Nickel coils is pre-fitted and that the tank should only ever be used on a mod that supports temperature control.

While there is a warning card included on the inside of the box lid stating that you should never dry burn Nickel coils it does not state anywhere that the tank should only be used with temperature control mods. While this might seem obvious to a lot of vapers it does not clearly inform a first time user who could quite easily make a mistake. Ideally the front of the box should be marked “Use only on temperature control devices”. 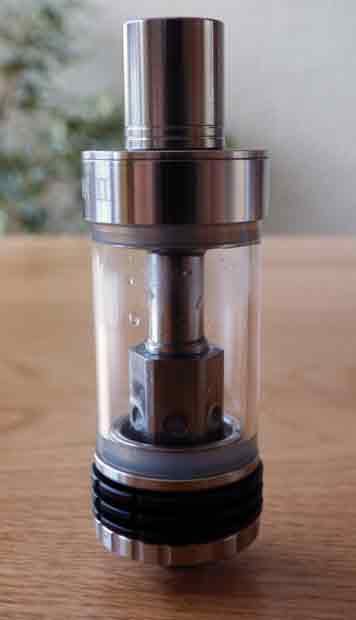 In terms of styling the Elite II is not a bad looking tank but it is very lightweight in terms of build quality. Everything fits together properly but I was left with the feeling that the entire tank has this very fragile feel to it.

For instance the glass doesn’t feel particularly thick and I have my doubts about how long it will last. The O-rings while being quite thick are rather strong and it does take a little effort to unscrew the tank.

The airflow control ring is in my opinion quite poor. It is made from delrin and it also serves as a heat sink but it just feels really loose and is too easily adjusted. My personal preference would have been for a much better airflow control ring to be included with this tank. Another problem with the airflow ring is the stacked heat sink fins much like the ones on the Sense Herakles tank and it makes it awkward to see just what airflow setting you have it set to. While you can simply draw on the tank to quickly find out, it is a little annoying.

The drip tip itself is stainless steel and it fits securely but there is one slight issue and that is that my other drip tips don’t fit this tank. I tried my Herakles drip tip and the one from my Lemo 2 as well as a wide bore delrin one I have and none of them fit, they are all loose.

The coils themselves are quite unique in that they are hexagonal shaped and they feature six wicking holes.

When it comes to filling this tank things get a little bit annoying. Firstly you have to remove the base and due to the very loose airflow ring you will lose whatever setting you had the tank set to. Secondly because of the strong O-rings you do have to unscrew with some pressure applied and I think if you were too forceful you may even break that very lightweight glass.

The next issue is the coil itself which is rather unique being hexagonal in shape and featuring six wicking holes. The problem is that if you screw the coil into the base you can’t fill the tank to full capacity due to the length of the chimney. The only way to get a completely full tank is to screw the coil on to the chimney first and then fill and once more attach the base which is a little trickier to do.

It’s a whole process that could have been avoided entirely if Sigelei had chosen to make the Elite II top filling. 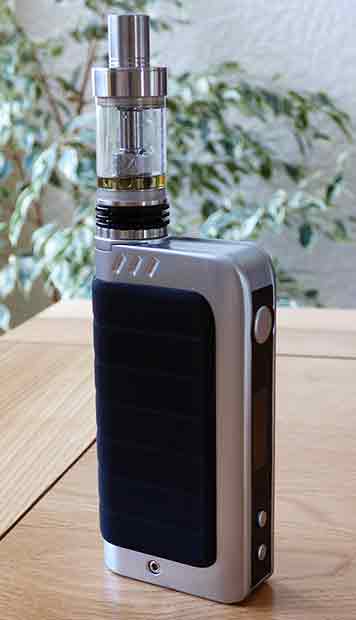 Despite the above issues and the somewhat strange design decisions, the Elite II is actually a decent vape. My first vape was with some of Vampire Vape’s American Desire Caddy and the flavour was fairly reasonable but nowhere near as good as a RDA, but then I wasn’t expecting miracles from a budget tank and I would say for the price you are paying it is good enough.

Vaping the Elite II with the 0.2 ohm coil on my IPV 4S set to 60 Joules at a temperature of 240C was a satisfactory vape but vapour production isn’t exactly huge. To get more vapour you do have to go to higher temperatures and high Watts/Joules to get the best from it. The downside to this is that the tank does get extremely hot and does spit sometimes and of course increased power means your battery/batteries will drain faster.

I also tried the Elite II with both El Toro Cigarillos and Puros. Surprisingly enough I ran three full tanks full and my coil still didn’t get completely coated in gunk which is unusual considering El Toro juice is a major coil destroyer. Obviously don’t try this yourself with your brand new coils since I had the luxury of meddling with the review item. What I did notice though was how nice tobacco e-liquids are with temperature control.

I don’t like the drip tip at all because it just feels too wide and it’s highly annoying that if you buy this tank you are stuck with it because no other drip tip fits.

Coil life seems to be really decent and I have been using the same coil for about a week now and the flavour is still good.

The Elite II is a very average temperature control tank. In terms of flavour and vapour production it is nothing that special but considering it is very cheaply priced it does make an attractive option to a user who may want to try out temperature control for the first time. Having said that there is a great deal of choice out there and for maybe £5-10 more you could pick up something much better than the Elite II.

The real let down of the Elite II is that despite it being made by Sigelei, a company associated with good quality and durable products this tank just can’t shake its extremely flimsy feeling.

The Elite II is a reasonable purchase if it interests you and it might be worth at least trying out to see if you enjoy temperature controlled vapes before moving on to something better.