Wotofo have sent out the latest version of their sub ohm stock coil tank, the nexMESH Pro. Having seen Craig’s review of the previous nexMESH tank I was eager to try this out especially as the optional rebuildable deck was available for review as well.

The nexMESH Pro comes with an outer sleeve with a large logo on the front and a list of contents on the back, removing the outer sleeve reveals typical Wotofo black and green packaging with a clear plastic lid with more branding on it. On the sides of the box there’s information about the four different coils and the optional rebuildable deck that are available, and a scratch ‘n’ sniff authentication code along with your colour choice. The tank, bubble glass and second coil are contained in a foam tray, and under the tray is a small instruction pamphlet and a couple of spare o-rings. The packaging could do with some finger cutouts to aid in removal of both the plastic lid and the tank itself, there was a small amount of swearing involved! 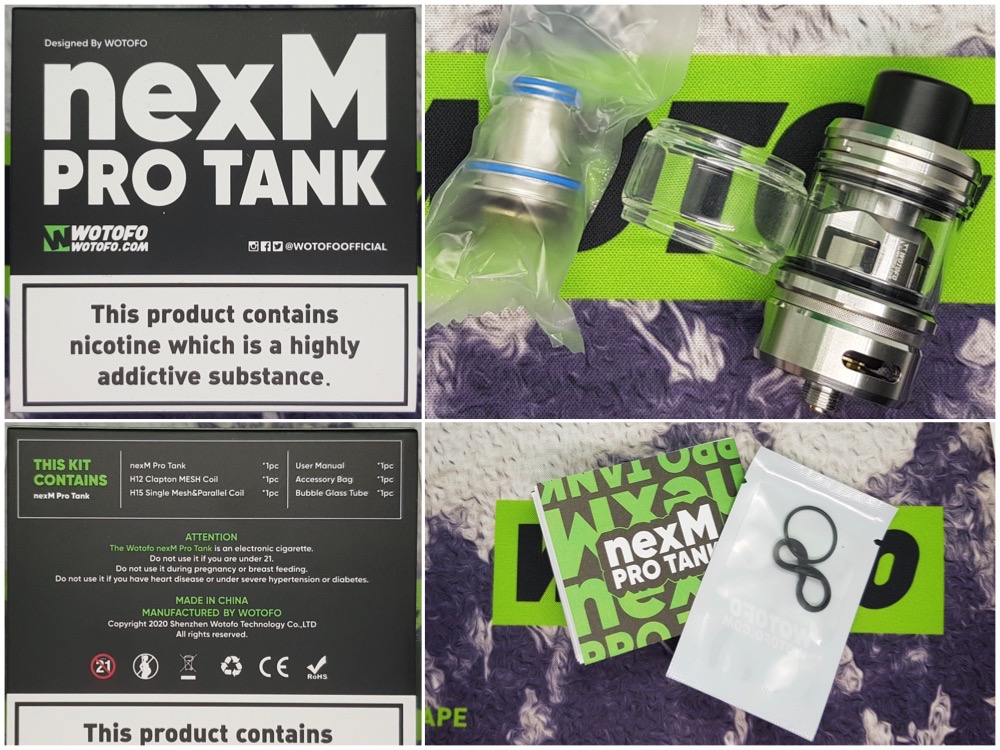 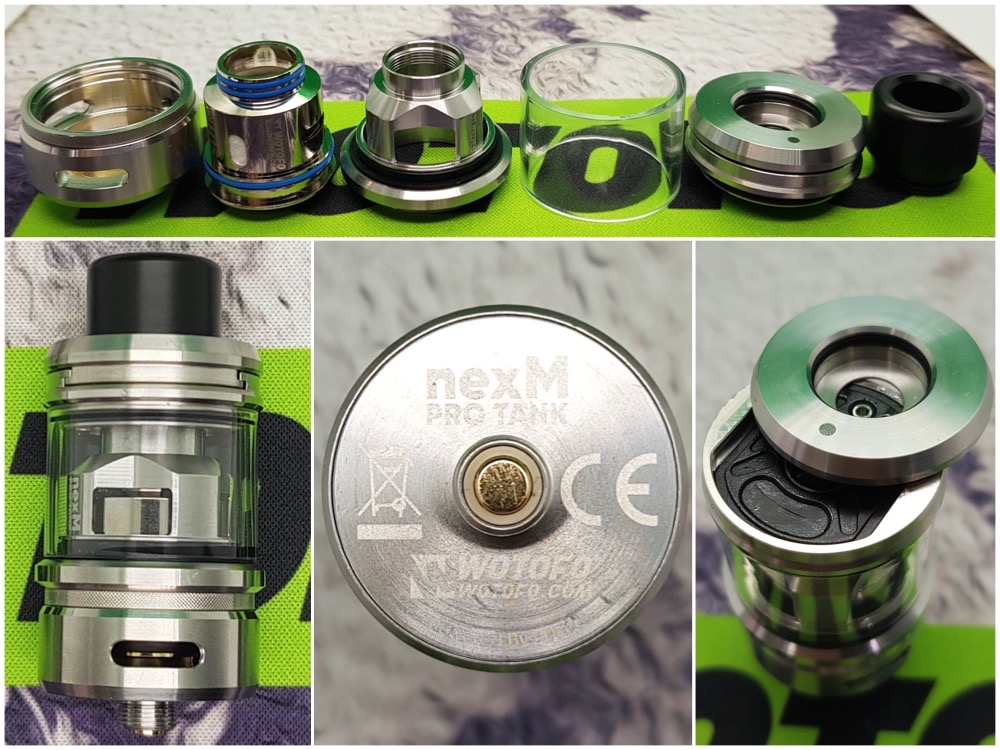 The nexMESH Pro tank breaks down into six pieces including the coil as you can see in the photo above, and comes with the H15 dual coil preinstalled with a H12 coil also in the box for the TPD and and international versions. The British edition will come with two H15 coils to make it compliant with the 2ml tank limit (with the straight glass fitted). Whilst I had the tank broken down like this, I took the opportunity to fit the bubble glass, simply position this onto the o-ring on the top fill section then screw the lower coil cage in place. Coils are press fit into the bottom of this assembly which makes it a doddle to change coils, but you will of course need to make sure the tank is empty first.

There’s the usual branding etc. laser engraved on the base along with a floating 510 pin so, as with other stock coil tanks, don’t use this on a mechanical mod! The airflow is adjusted with three sizable cyclops style air inlets on the base with hard stops at the fully open and closed positions. This has the perfect amount of tension to ensure that whilst the airflow is easy to adjust, it shouldn’t move on it’s own in pockets and the like. Up top, there’s a comfortable delrin 810 drip tip with a single O-ring, the catch cup also has an O-ring so most of your own 810 style drip tips should fit as well. This has a push to fill system denoted by the black dot on the top, with a gasket to prevent leaks and a breather hole to aid in filling. Filling has been easy, but the top fill could perhaps do with a little more tension, it hasn’t come open in my pockets but there have been a couple of close calls on that front! 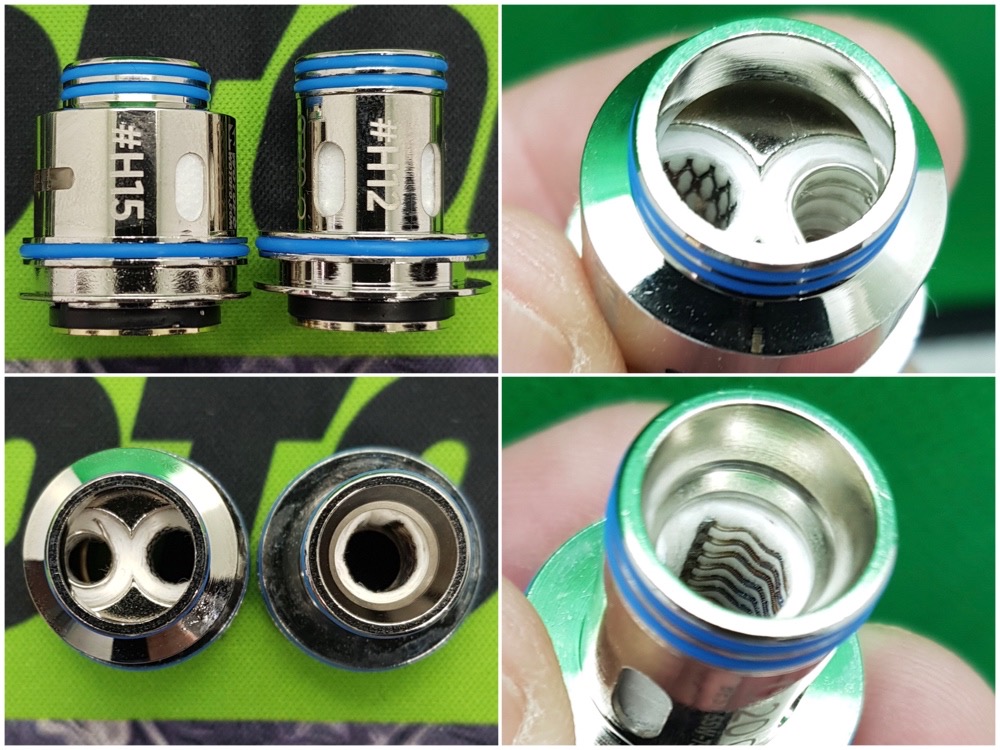 I was sent the TPD edition for review which contains both the H15 and H12 coils. These are both pretty chunky coils and you can easily see why the tank capacity drops with a dual coil fitted as it's quite a bit bigger than its single coil sibling.

I decided to start out with the H12 coil because, much like the Augvape intake coil I used recently, this has multiple strands of Clapton wire and although the cores are kanthal A1, the outer Clapton wraps are Ni80 which means I can’t use this coil long term thanks to my nickel intolerance. It has a resistance of 0.2ohms and is rated for 55 to 75 watts. In practice, I found it needed 65 to 70 watts before it started producing good flavour, but for the full effect I needed to push beyond this to 80 watts with the airflow fully open! This is a great coil so long as you don’t have an issue with nickel.

The H15 coil is where things get a little funky. This actually has two completely different cores, a steel mesh and a parallel round wire (kanthal A1?). The thinking here is that the two different wire types should bring out different aspects of your eliquid to give superior flavour. It’s rated at 0.15 oHms for 65 to 80 watts. Again, this performed much better above 70 watts but I didn’t notice any improvement beyond 75 watts so settled there. Flavour was good again, but I wouldn’t say it was all that much better than the H12 coil. This may vary depending on the eliquid you’re using though. 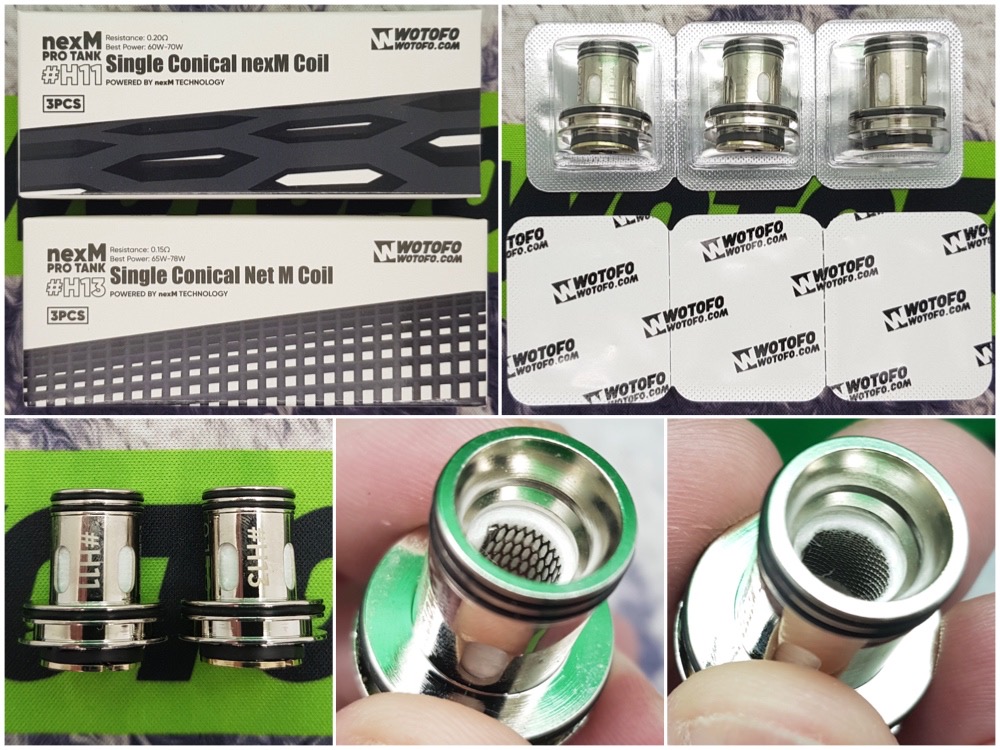 Wotofo also sent out samples of the H11 and H13 coils. These come in packs of three individually sealed coils and are both single mesh coils with very different mesh weaves. The H11 has a honeycomb style, whilst the H13 has a much finer weave, and I believe they both feature wotofo’s conical coil design which is supposed to concentrate the flavour and vapour production by subtly narrowing as you move up the coil.

The H11 is a conical steel mesh coil rated at 0.2oHms for 60 to 70 watts. It needs 65 watts to really get going and is much better at 70W or even above. For me, this really seemed to come alive at 75 watts. This could well become my favourite out of the bunch.

The H13 is a conical kanthal A1 mesh coil rated at 0.15 oHms for 65 to 78 watts. The 78 watt upper limit seems a bit random but I soon found out why though as this coil definitely starts to struggle at 80 watts. Anything in the 70 to 80 watt range produced good flavour, but the coil really seems to struggle with chain vaping, most likely due to the fine mesh being used. 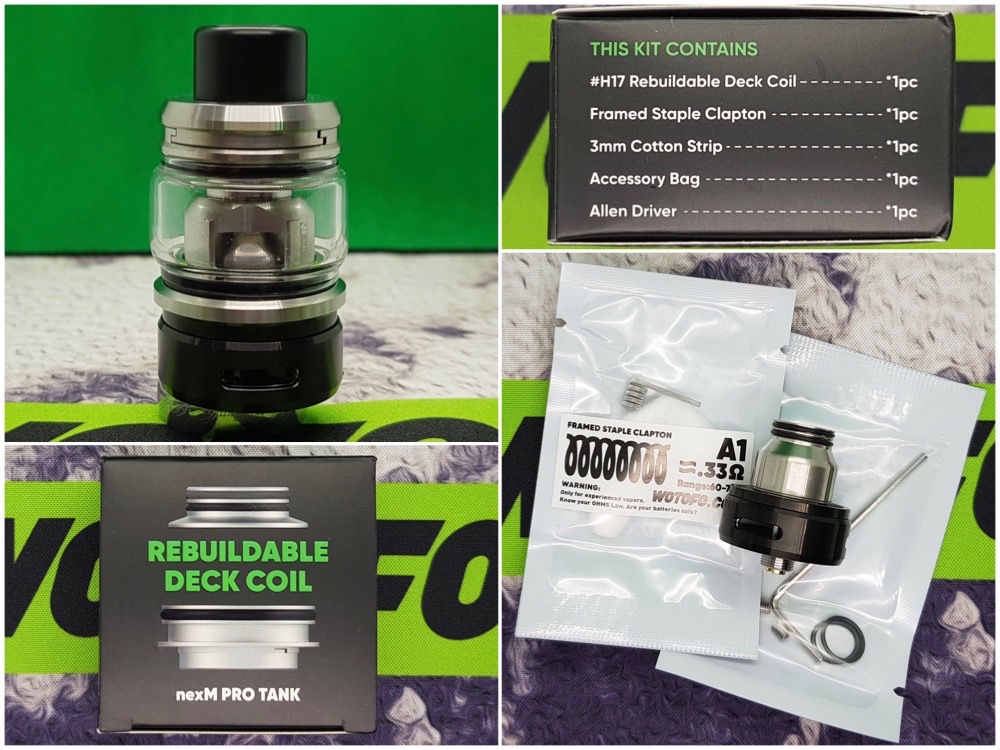 Wotofo also sent out the optional rebuildable deck for me to try out. This comes in simple cardboard packaging and, rather than going down the rebuildable coil head route, you get a whole new bottom hardware. For some bizarre reason, Wotofo sent out a silver tank but then included a black rebuildable deck, fortunately this didn’t end up looking too out of place thanks to the large black o-rings and delrin drip tip on the tank. Also included are two bags with an Allen key with spare o-rings and a premade coil with some cotton.

The deck comes in two parts, the main lower hardware and a screw on bell cap/chamber. The 510 pin protrudes quite a bit and the design, along with the German peek insulators, mean that this looks like it’s probably safe to use on mechanical mods if that’s your thing. 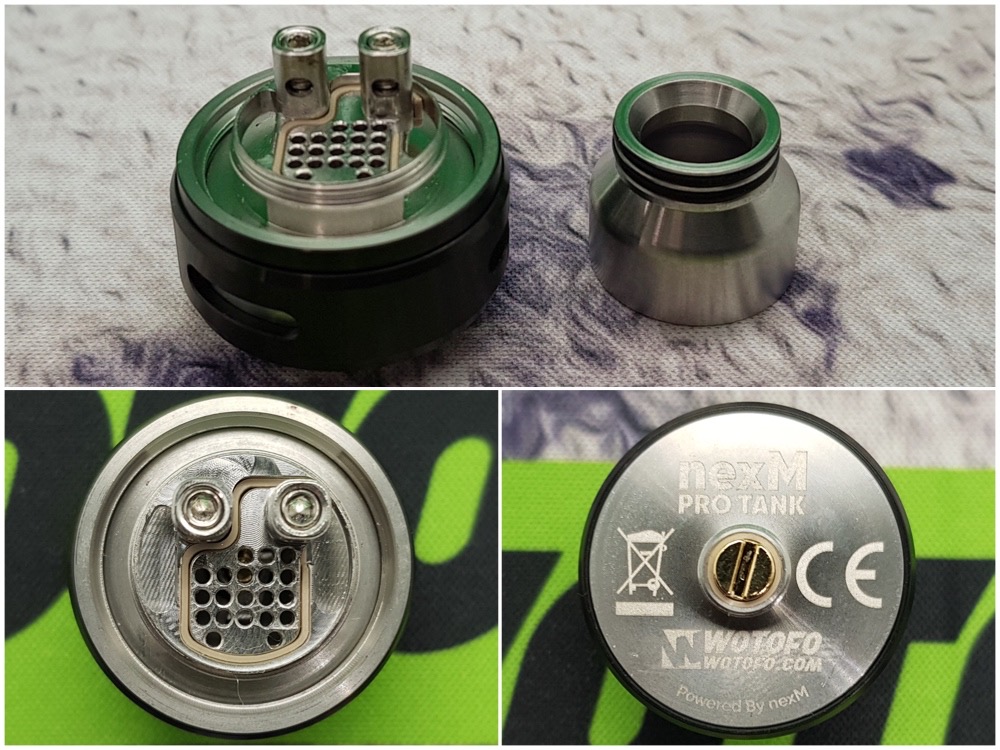 The build deck is a simple two post design with decent sized 2mm x 1.5mm post holes which means you can get fairly chunky builds in here if you’re so inclined. The included framed staple Clapton fit easily and was nicely held in place with the grub screws (I used a wera 1.5mm hex tool) with no clipping of the leads when tightening everything down and plenty of clearance at the back to clip the leads without fear of grounding out on the bell cap.

The airflow features a rather odd asymmetrical design with seventeen 1mm air holes. This should at least give smooth airflow. There are two fairly decent sized wick ports either side of the deck which is slightly raised to give this rdta style wicking.

The supplied framed staple Clapton is labelled as kanthal A1 but went slightly blue when pulsed so I suspect a possible nichrome outer Clapton wrap? Whilst wicking was easy, I did need to thin out and trim the wick quite a bit with this 3mm id coil, so I think I may try a 2.5mm coil in future. 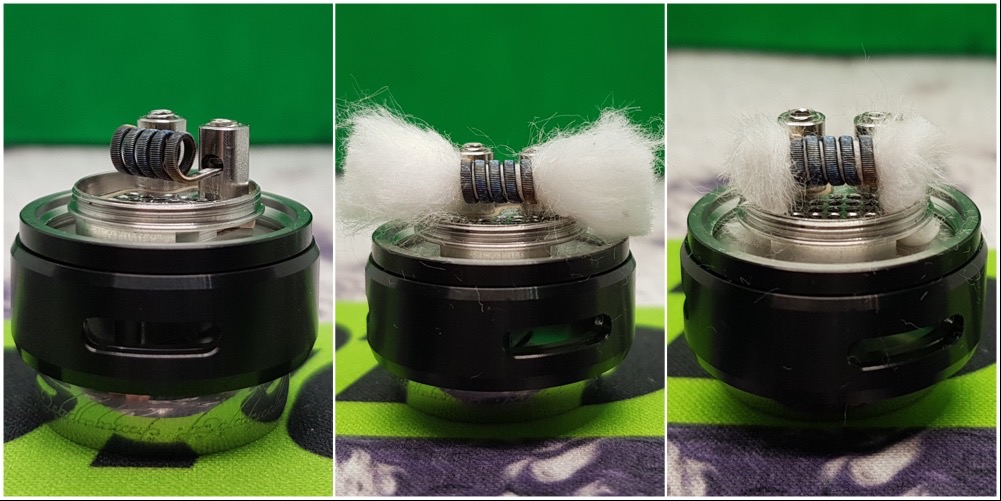 More importantly is how does this perform? In a word “superbly”. This transforms the nexMESH Pro into a fully fledged rta, flavour was great with the included coil at 60 watts with the airflow two thirds open, and thanks to those seventeen airflow holes, it’s super smooth and fairly quiet. It’s been wicking like a champ as well.

Wotofo has produced yet another great subohm/mesh coil tank here. Add in the optional rebuildable deck, and you’ve got everything you need all in one neat package. If you’re primarily a stock coil tank user and want an inexpensive way to dip your toes into rebuildables, then this is a nice inexpensive way to try it out and even if you decide it’s not for you, you’ll still have a great subohm tank to use. I can see this staying in my rotation for a while alongside my other Wotofo rtas. 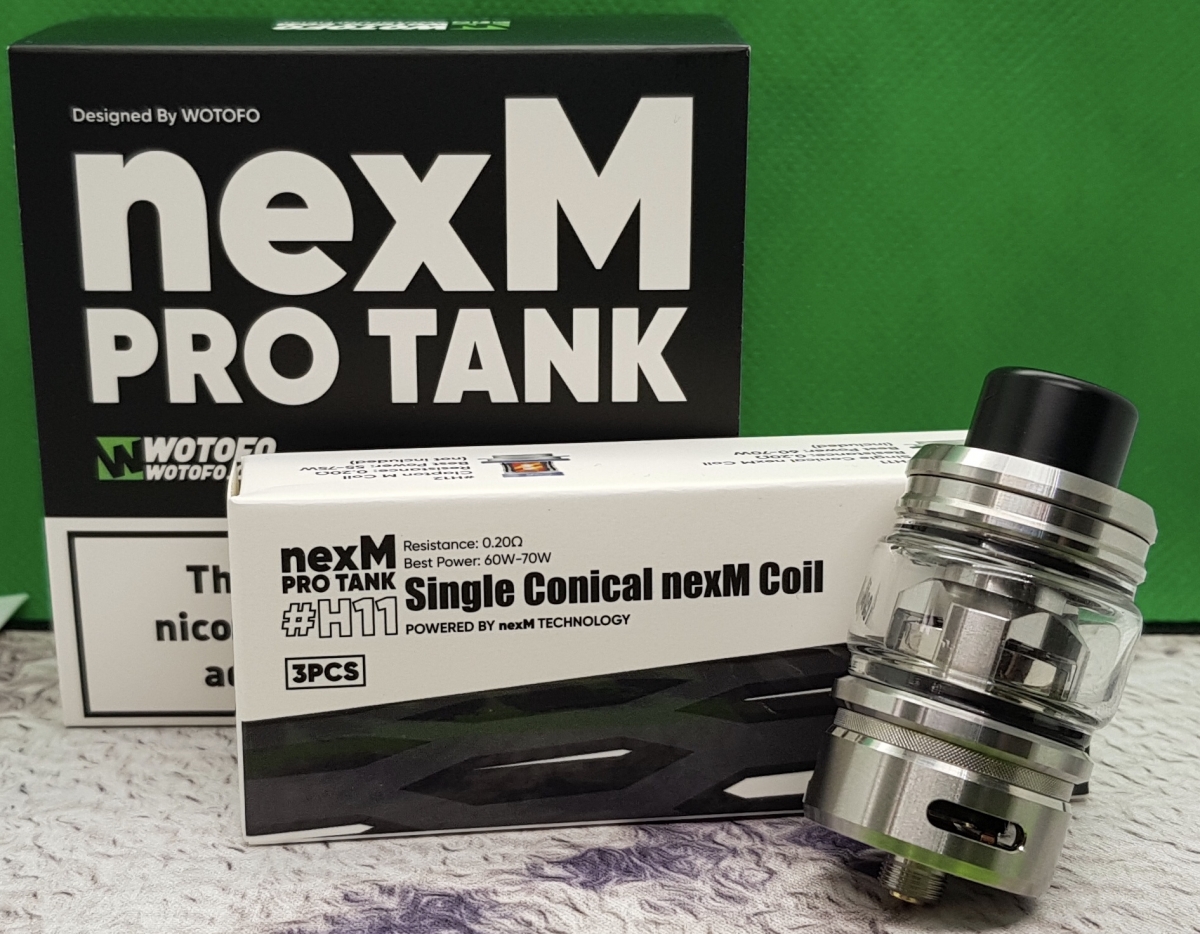