The Acme Sub-Ohm tank is designed and manufactured by iJoy ACME Vape. This tank features top airflow and it is designed to prevent spit back from the coil. Promising great flavour and clouds, iJoy claim that you can use the 0.25 ohm coil and get a very good vape at only 5 watts.

In terms of it's actual looks I rather like this tank. The machining itself is very good and everything fits together very well. Stripping the tank down is easy enough and I had no problems at all. The tank was thankfully completely free of machine oil but I washed it anyway. 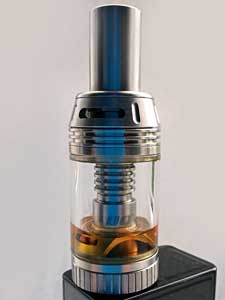 The glass feels nice and solid and the styling makes for a very open looking tank due to the airflow control being situated at the top. The drip tip is rather strange because it has to be screwed in. The reasoning behind it is so you can pick up your tank safely with the drip tip but I have to say that's not something I would ever do anyway.

When it comes to using your own drip tips you will run into problems. I tried eight different drip tips and while they all fitted they were extremely wobbly which really seems something of a poor design decision.

The top most section of the tank features the airflow control and it is very easy to adjust. I found it neither too tight or too loose and the slots themselves are quite wide offering a very open draw when fully opened up.

Considering that iJoy claim you can vape this tank at very low wattage I have to say in actual practice that really isn't true with all my devices. If I use either my Sigelei 100w+ or my Dovpo TC-50 I find I actually need at least 15 watts to get any reaction from the tank but the vape at that wattage is terrible. Increasing the wattage to 22 watts and it becomes almost acceptable but it still is very poor compared to products like the Subtank Mini.

At 30 watts it is reasonable and vapour production is better but the flavour is nothing special. I wouldn't describe it as bad but it is very flat and muted.

I first tried White Beard Tobacco which is a 100% VG juice and I actually had only a few dry hits in this tank. Vapour production at 30 watts was okay but it certainly didn't make for a very satisfying vape. Flavour was acceptable with this juice but less than perfect.

I then proceeded to try some Manabush Waxahachie. Being 50/50 VG/PG the tank handled it better but in terms of flavour I would say it was a disservice to the juice to run it in this tank. The typical flavour you would expect was there but once again it seemed overly muted. Since it was apparent that premium juice is truly wasted in this tank I then chose to empty the rest of the juice into a spare dropper bottle so I could use it in my dripper.

Several times when I vaped this tank I ended up with juice in my mouth and I felt that the main air tube was actually sucking up the juice like a straw.

The airflow itself fully opened up is quite a nice draw but flavour suffers as a result. Closing the airflow down to half or three quarters resulted in slightly better flavour but overall it was still very muted.

Cloud production at 30 watts is distinctly average and I have to say you will get far more far more vapour from other tanks.

I had to perform all my tests with the included 0.3 ohm coil which technically should have been a 0.5 ohm and I couldn't actually try the 0.25 ohm coil because it had no actual coil inside it. If this sounds rather erratic believe me it was.

Like all Sub ohm tanks the coils need to be primed but due to the rather odd choice of wicking material I found that the pre-fitted coil needed a good amount of time to absorb the liquid, much longer than is typical. The wicking holes in the coils are very small and I think that is yet another problem.

Unfortunately this tank is somewhat flaky when it comes to good quality control. The actual machining of the tank itself is very good and I can't fault it's construction but the coils are very haphazard. This product was supposed to include a 0.5 ohm coil pre-fitted however the one included with the review item was actually a 0.3 ohm. These problems continued when I inspected the included 0.25 ohm which was actually missing the coil wire and is nothing more than a unusable shell with some cotton in it.

It seems these errors are somewhat widespread and I have read many comments on the internet stating that "no two coils are alike" which is rather troubling.

While I like the design of this tank it is unfortunately let down in a number of areas. Firstly the wicking holes are too small and the wicking itself has a rather strange combination of materials that frankly don't sound that pleasant at all. Ideally they need to make the wicking entirely organic cotton.

The flavour is also nowhere near as good as other Sub ohm tanks, it can be acceptable enough but honestly in my opinion you would be better off looking at other products which will offer you a better vaping experience.

The fact that this tank is supposed to prevent spit back wasn't actually true and several times I ended up with juice in my mouth.

The tank also fails in it's primary function and at low wattage gives a very weak vape. Certainly the included 0.3 ohm coil needs a typical amount of wattage (25-30w) to offer a acceptable vape.

I feel in many ways like this is only half a review since all I got with the tank was the single working vertical coil and it would have been nice to actually see how it performed with the horizontal 0.25 ohm coil. As to whether it would have been better that remains a unknown factor but considering the other issues I doubt it would have offered anything that serves to redeem the overall package.

I feel the most major fault with this product is the fact that the coils suffer from such poor quality control and there is a high chance of a customer buying this tank and finding they have only one working coil with potentially the wrong resistance.

It is something of a shame because the tank has some good ideas but iJoy really need to seriously tighten up their quality control if they want people to consider this as a worthwhile purchase.