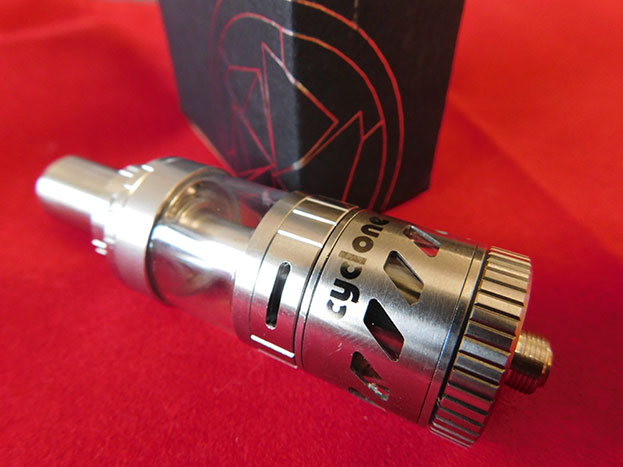 Introductioni to the Sense Cyclone

The Sense Cyclone is the follow up to the top selling Sense Herakles, which in my opinion was one of the very best sub ohm tanks ever released with excellent vapour and cloud production, and a tank I still use to this very day due to its reliable and outstanding performance coupled with long coil life.

Enter the Cyclone, boasting a new top fill system, brand new revised and upgraded coils able to handle a whopping 150w, a rebuildable coil head option along with a temperature control head, as well as a stainless steel coil head (used to great effect in the Uwell Crown) and the usual Kanthal option too. There’s an anti spitback system in place too, and the airflow control system has been totally redesigned. At first glance, it seems to share very little with its predecessor, it seems to be a whole new tank system. On paper though, the specs of the Cyclone make it seem like an absolute beast!

The Sense Cyclone has got some huge boots to fill in being the next tank to come out of the Sense stable, but given how good the Herakles was I’m really excited to get my hands on it. Let's see what it has to offer! 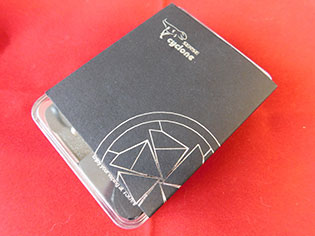 Really impressed that you get a spare Pyrex glass tank section included in the package. Too many manufacturers are slacking on this as of late, which proves costly if you do break the tank section. There is also a 0.15ohm Ni200 coil head available separately for the Sense Cyclone and an RBA head is in development and to be released shortly., which was sorely lacking from the original Sense Herakles. 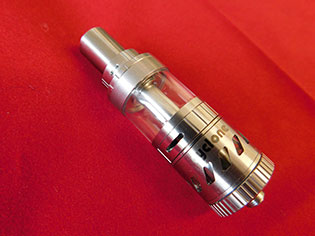 It’s slightly taller than the Sense Herakles, but it bears very little resemblance to its predecessor. The extra height is there to accommodate the increase in capacity to 5ml and also the airflow control at the base of the drip tip.

Most noticeably on first glance you will see that adjustable airflow has been added to the drip tip base, and the airflow ring has been redesigned at the base of the tank. The Sense logo still remains at the top, and Cyclone is found just above the airflow control ring. A copper 510 connector is found at the bottom and the Sense Cyclone is 22mm width, standard with most tanks, in order to ensure a flush fit with your mods.

The Cyclone itself is constructed of 316L food grade stainless steel, with a clear Pyrex tank section positioned centrally in the tank. Looks wise it’s not going to win any awards, much like its predecessor, but it’s by no means an ugly tank! 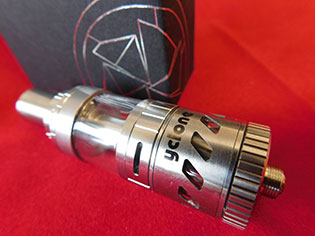 The capacity has received an upgrade over the Herakles from 3ml to 5ml and believe me you are going to need that extra 2ml capacity as the Cyclone is one thirsty tank, no matter what coil you use! Considering as it’s designed for high power usage, it does come as no surprise, and the original Herakles was a pretty thirsty tank too.

Refilling the tank is done through the new top fill system, which seems to be ever present on all new sub ohm tanks these days, however I have found that it isn’t as straightforward to refill as it is with a lot of other sub ohm tanks, such as the Uwell Crown. To start off with, you need to turn the tank upside down, twist the top section into the refill position, turn the tank upright again, remove the top cap, fill with juice, replace the top cap then twist back into vaping mode. That is the only way I have found that avoids leaking- I have found that simply setting the tank to refill mode, twisting off the top cap and filling seems to disturb the vacuum and cause juice to leak out of the airflow holes. 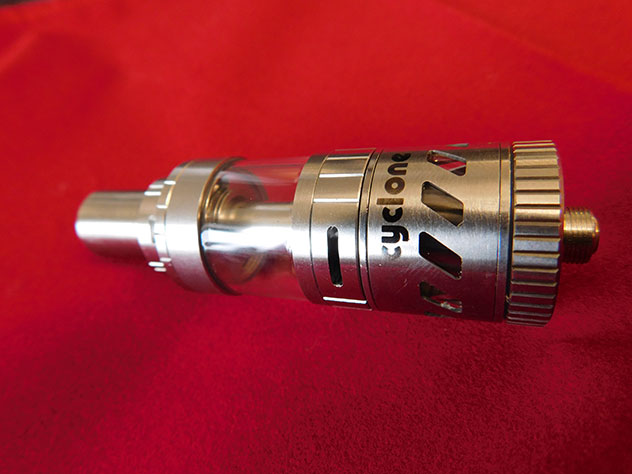 With a tank designed to take 150w you need big airflow, and the Cyclone doesn’t fail to disappoint here. There’s some massive airflow available with this tank when fully open- and as you would expect some very big clouds are kicked out by the Sense Cyclone! Cloud production is definitely on a level that a lot of other sub ohm tanks are quite frankly unable to match. Airflow control is also now present at the base of the drip tip, so you can fine tune the vape even further, and also open it right up to help keep your vape cool at high wattage. This definitely helps out if you are vaping at 100w+, as the vape stays pretty cool at this level.

The bottom airflow control is another item totally redesigned over the Herakles. Certain sections of the vaping fraternity derided the airflow control on the Herakles (I did not have a problem with it), as some said they were not easily able to see what the airflow was actually set to, so those people will be pleased to see and use the new system in place with the Cyclone. Now you will find that there is an adjustable cyclops airflow slot beneath the glass tank section, and this is fully adjustable as well, so you can customise the airflow exactly how you like it. It looks smaller than the one present on the Herakles, however it seems to draw in more air and as such put out bigger clouds when fully open!

One thing of note is that the coil heads are not backwards compatible with the Sense Herakles, and vice versa, as the coils have been completely redesigned for the Sense Cyclone. In the box, you will have the 0.6ohm Kanthal coil pre installed and the 0.2ohm 316L Stainless Steel coil available as a spare. 0.15ohm Ni200 coil heads are available separately and an RBA coil will be available shortly for the Cyclone. 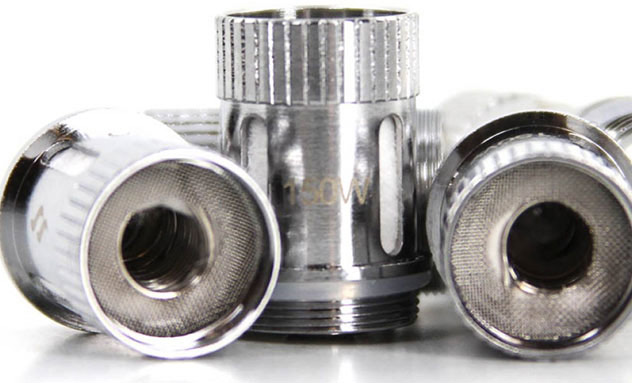 I did notice that the flavour did not seem to be as good as the original Herakles tank was, however the Cyclone did have big boots to fill as the flavour was absolutely exceptional on that tank! The flavour is by no means bad with the Cyclone, far from it, it's still a step above a lot of similar sub ohm tanks available. Clouds are where the Cyclone really shines, this tank can whip up some huge clouds that really mix it with the best of them!

The Cyclone is definitely able to back up it’s rather bold claim that it is able to handle 150w, as without a doubt it can, and it handles it a lot better than others claiming to offer coils that can take that sort of power. Yes it does get warm, even with airflow both top and bottom set wide open, but it’s certainly cooler than a lot of other tanks that operate in the same power range. I was able to chain vape (at zero nicotine!) quite comfortably with the drip tip airflow open without it getting uncomfortably hot.

I’ve got to say that I was a little disappointed that the flavour wasn’t quite as good as it was with the stellar Sense Herakles, and there were issues with the Cyclone being a little leaky and it’s also definitely noisy, however the cloud production from this tank was on a whole new level. It’s definitely one for the high power vaper as in my opinion the Cyclone only really got going once you went over the 90w level, but when you do and open up the airflow fully, the cloud production is exceptional.

In conclusion, it’s a cloudchasers tank for now, and it does that job very well, in fact it's amongst the best tanks around when it comes to clouds. To be fair, the Herakles had absolutely outstanding flavour and matching that with redesigned coils was always going to be a really hard ask. The flavour is not bad at all, not by a long stretch, it’s still far better than what you would find with a lot of sub ohm tanks. I would be really interested to see what the 0.15ohm Ni200 coil and RBA head can bring to the table once they become available, and see if this improves the flavour at all. If you are looking for a tank with huge airflow and big cloud production then the Cyclone will be the one for you!