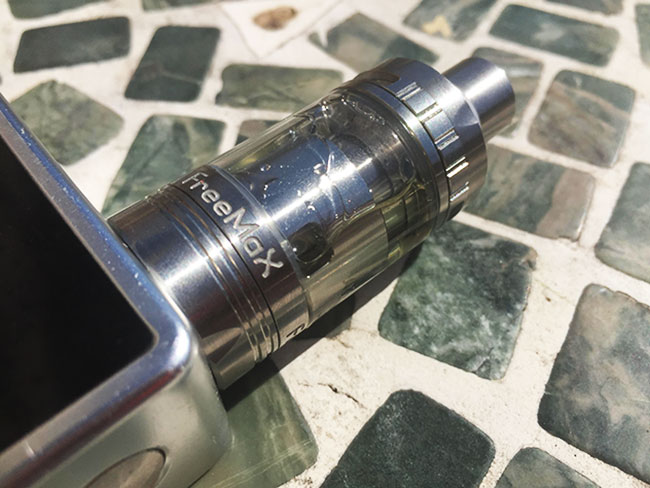 Freemax are back with a direct follow up to the Freemax Starre Pro, after dipping their toes in the ceramic coil market with the Scylla, in the form of the Freemax Starre Pure. A virtually leak proof sub ohm tank that has top filling, top airflow, a Teflon insulated drip tip to ensure the drip tip always stays cool, and some newly designed coils in the form of the new CCC coil head.

The CCC (Ceramic Cover Coil) coil heads are a new coil head featuring a ceramic element that Freemax have specifically designed for the Freemax Starre Pure. They are available in 0.25ohm and 0.5ohm resistances, and feature a traditional kanthal vertical coil set up wicked with Japanese organic cotton, and a medical grade ceramic outer housing that helps to reduce heat. Freemax also state these coils can be refilled 80-100 times, or puffed 60,000 times before they degrade fully, which is exceptional lifespan!

Having been an unashamed huge fan of the Freemax Starre, Starre Pro and the Scylla, I was delighted to get my hands on the Starre Pure to see how this compared to not only Freemax’s previous stellar releases, but how it fares compared to what else is out there, as in my opinion Freemax are one of the very best sub ohm tank manufacturers out there.

I’ve got to say, I was really impressed with the new style of packaging Freemax have gone for here. Gone is the old plain clamshell packaging they have used with previous releases, and a funky and eye catching new design has been brought in, which will definitely help the Starre Pure stand out from the crowd. Inside the Freemax Starre Pure retail package you have the Freemax Starre Pure itself, with the new CCC 0.25ohm coil head, a spare 0.5ohm CCC coil head, replacement glass tank section, seven spare o-rings and a detailed user manual. 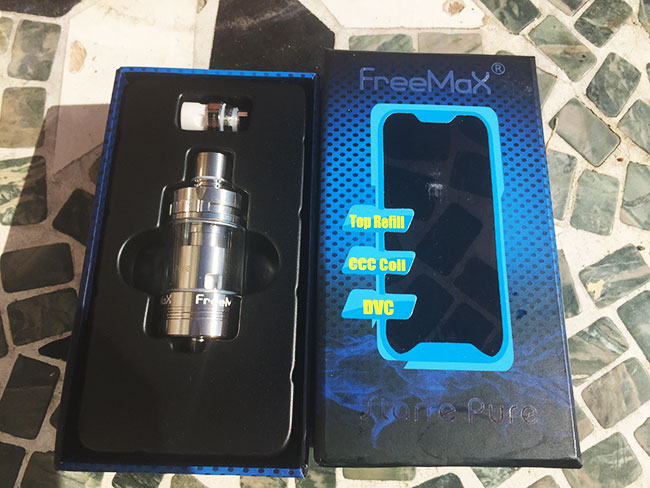 Manufactured from food grade solid stainless steel with a reinforced glass tank section, and boasting a 25mm width, the Freemax Starre Pure is one hell of a solid tank. It feels weighty in hand, and the build quality is pretty much perfect, with smooth threading and no sharp edges. Having a 25mm width means it will overhang on a lot of mods however, I use mine with my Efusion DNA200 as the Freemax Starre Pure has a flush fit when used with this mod, and I really think it looks the business on the Efusion. 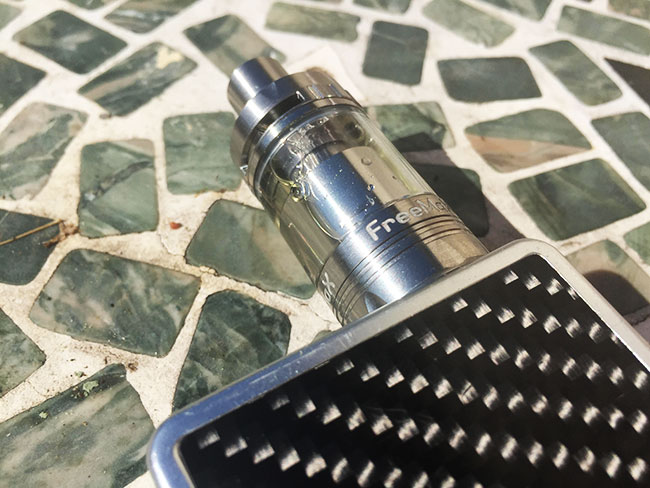 Despite the size of this tank, the capacity is 4ml, due to the large chimney section present. Top filling has been made simple this time around, there’s no juice flow control present with this tank, so you simply twist off the top cap to reveal two cavernous filling ports. These accomodate any style of bottle, and are wide enough for you to simply pour your juice out of the bottle straight into the filling ports! The drip tip at the top has a stainless steel outer with a Teflon coated inner, which cuts heat transference to the drip tip right down.

Interestingly, Freemax have decided to go with a top airflow system, that also helps to eliminate leaking. Air is drawn down through the top of the airflow, through the chimney, to the base of the coil and back up again. The large chimney section and tank are sealed off, eliminating risk of leaking. 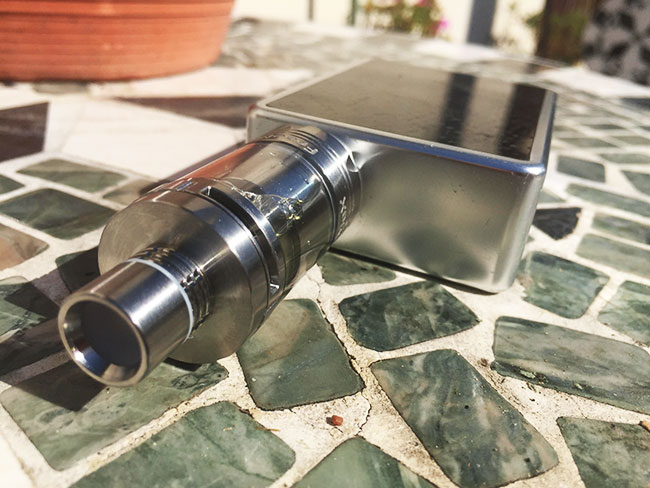 There’s one thing that always consistently impresses with tanks from Freemax and that is the airflow. Ever since the original Freemax Starre, which boasted almost unheard of levels of airflow for its time, Freemax have always provided massive airflow with their tanks that is controlled with a best in class airflow control, that I’ve always found to be smooth, silky and responsive. 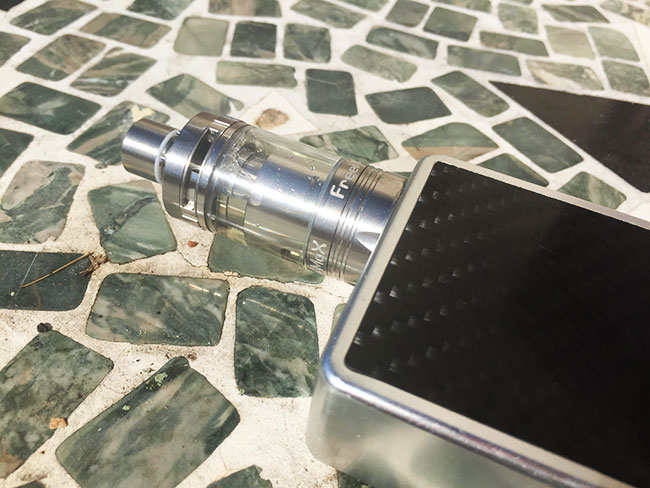 For the Freemax Starre Pure, Freemax have made the switch to top airflow with this tank, in order to construct a leakproof sub ohm tank. That doesn’t mean Freemax have compromised on vapour production though, quite the opposite, there are two cavernous airflow slots at either side of the Freemax Starre Pure that when fully opened, are capable of providing some quite exceptional clouds. It’s a lung hitters dream, a very airy vape indeed, and even closing the airflow down to almost fully shut off still provides a restricted lung hit.

Starting off with the pre-installed 0.25ohm coil, I began by vaping this at 35w which didn’t offer me a whole lot in terms of flavour, but a hell of a lot of vapour already! Pushing this up to 50W really started to bring great flavour notes to the fore, with a phenomenal level of flavour. At 60W upwards the vape gets a fair bit warmer, but not uncomfortably so, and the more power I pushed through it the more vapour I was rewarded with, this really does throw out a huge level of vapour! I felt the 0.5ohm coil needed at least 30W to get going, and it performed best in the 40-45W region. I found the 0.5ohm coil to provide a great depth of flavour to my juices, whilst still being able to produce an eye opening level of vapour. Neither coil struggles wicking either, I tested up to max VG juices with this tank and never once felt that it struggled wicking. 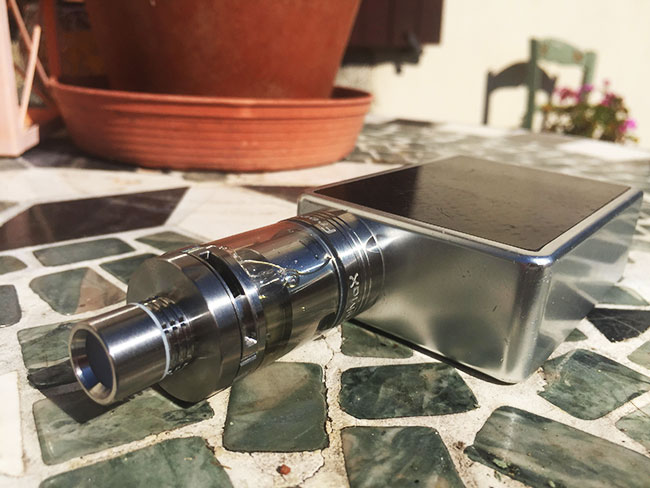 I didn’t feel that you needed to push either coil to it’s upper recommended limits to get the very best out of either coil. The 0.25ohm coil I preferred using at 60W, and the 0.5ohm coil I preferred to use at 40W, which provided a vape tailored to myself. My preference out of the two coil heads was the 0.5ohm coil, as I actually felt the flavour from this coil was slightly smoother and deeper than the 0.25ohm CCC coil head, however both coils perform outstandingly well.

With both the 0.25ohm and 0.5ohm CCC coil heads, the vape is noticeably cooler than you would expect, however at high wattages it still has a pleasant warmth to it. The ceramic element and top airflow also do help keep the tank cooler with heavy usage, it still does get a little on the hot side however, but not uncomfortably so. I wouldn’t say that heat transference to the tank itself is eliminated completely, but reduced to a more comfortable level. The teflon coated drip tip does a great job of keeping the drip tip cool during usage however, and never once did I feel that the drip tip was heating up too much.

I’m not sure the claim that the coil heads can last 80-100 refills or 60,000 puffs is entirely true, as after over two weeks of usage on both coils I felt the vape quality had substantially degraded enough to warrant swapping a new coil in, and there were obvious visible signs of scorching to the cotton, however two weeks of lifespan from these coils is very good going. I noticed that these coils also seemed to be a little less thirsty than equivalent coils from other manufacturers, and I got more mileage from a tank of juice!

Overall, I felt the Freemax Starre Pure performed outstandingly well, and I really have enjoyed using this tank on a daily basis, and try as I might I could not get this tank to leak at all. I can’t really fault any aspect of the performance of this tank to be honest.

There’s a reason that I really enjoy products from Freemax, because so far I’ve never been let down by the performance of the original Starre, Starre Pro or the Scylla. They really do know what goes into producing a great sub ohm tank, how to deliver excellent flavour with huge airflow options, and how to construct a solidly built tank. As per their other releases, the airflow control is a particular highlight, offering plenty of options and a delight to use! A special mention must also go to the top fill option with the Starre Pure, it’s dead easy to fill your tank quickly on the move, and combined with the generous fill ports and leakproofing present on the tank, mess free too.

The Freemax Starre Pure is yet another superb release from Freemax, I’d happily say that the Starre Pure provides the cleanest and smoothest flavour from any Freemax product yet, with an almost rebuildable tank level depth to the flavour. Thankfully the move to top airflow doesn’t compromise on the massive clouds the Starre series of tanks has been known for, I could argue that the Starre Pure actually is capable of besting the original Starre and Starre Pro when it comes to clouds, which is definitely saying something. The top airflow system also means the Starre Pure is virtually leakproof as well, you can carry this around with no concerns about leaking. They have done an outstanding job of providing a leakproof sub ohm tank with top airflow that doesn't compromise on flavour or vapour, quite the opposite in fact!

Top marks to Freemax for the Starre Pure, this is a tank that boasts some of the best build quality around for a sub ohm tank, excellent coil lifespan and some of the best performance around when it comes down to flavour and vapour production. It’s easy to fill and virtually leakproof as well, it’s pretty much ticks every single box when it comes to sub ohm tank performance. Brilliant stuff! 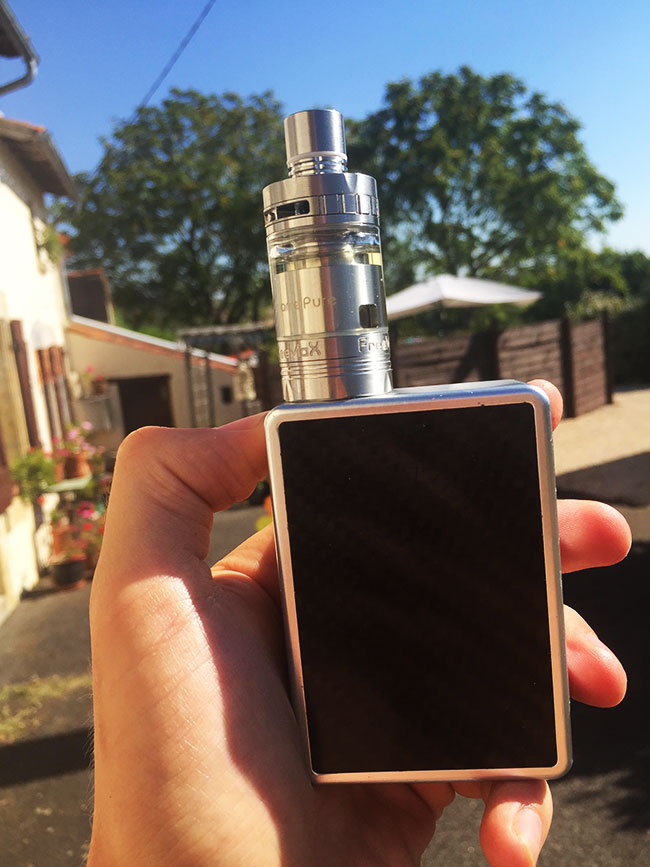