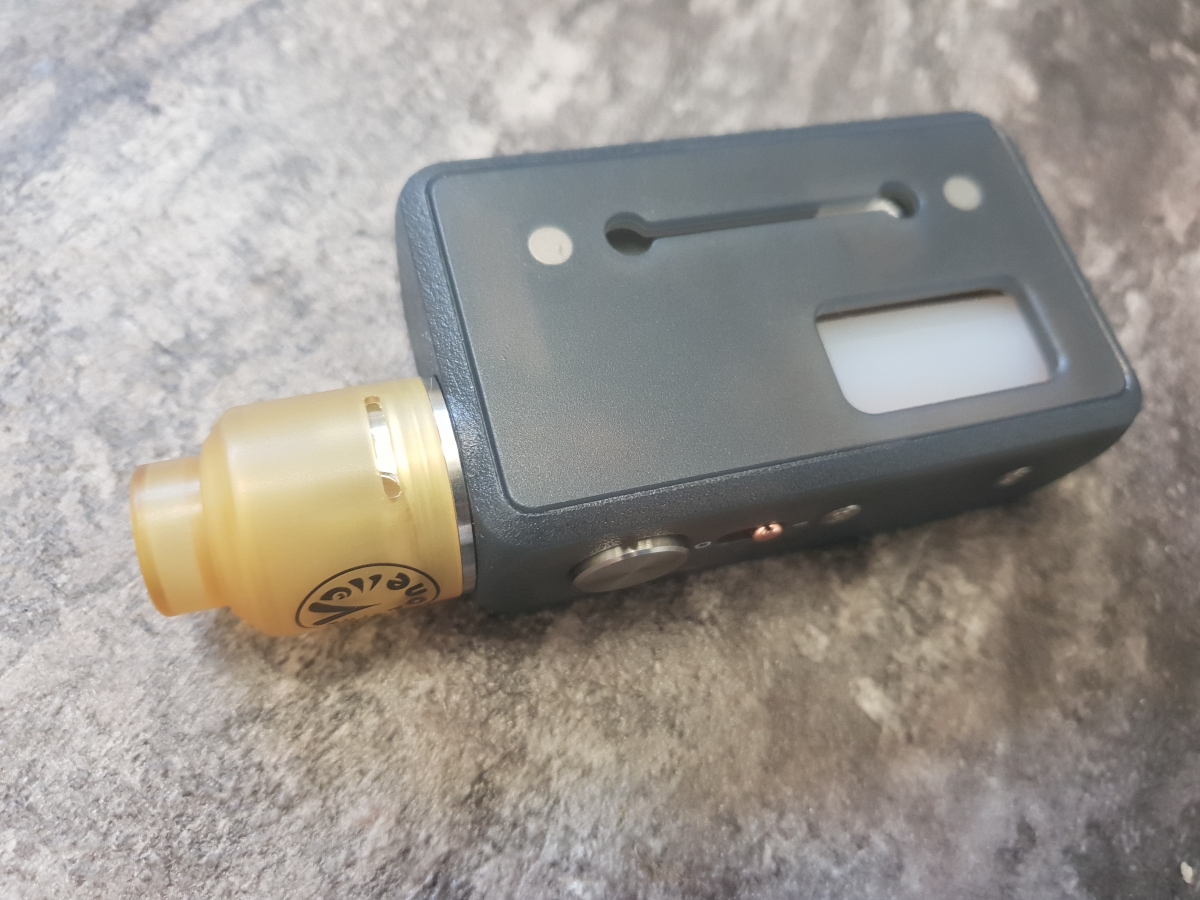 Vzone are a vaping manufacturer based out of Shenzhen, China, and they have recently released a whole range of attractive looking products to the market, to appeal to all different types of vapers!

VZone’s Simply Squonk Kit is designed to be a quality squonking set up that doesn’t break the bank! You get the Simply Squonk Mod and Simply Squonk RDA included for your money, and this is shaping up to be a great little budget squonking kit... 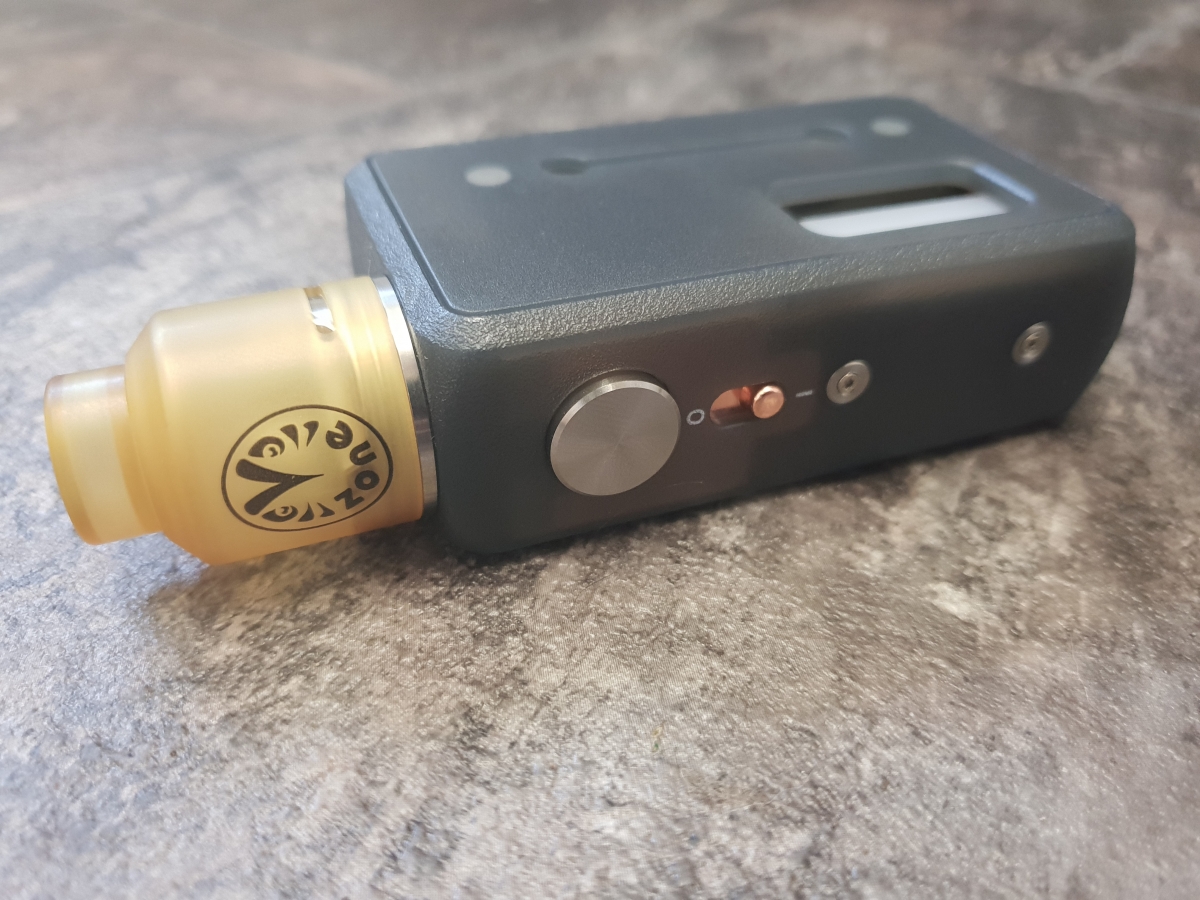 The VZone Simply Squonk Kit has been designed to be a lightweight and portable mechanical squonking kit, and it feels very small and light in hand!

VZone have constructed the Simply Squonk Mod from polycarbonate, with frosted gold and frosted ash finishes available. It weighs only 80g, and measures in at a compact 81mm x 27mm x 47.5mm.

A large silver fire button is located to the side of the Simply Squonk Mod, with a relatively short throw. It’s a little crunchy, but makes a good connection and does the job! A locking switch is found below the power button, and this will prevent the firing button from making a connection when engaged. I would still recommend removing your battery when not using the Simply Squonk Mod, as any juice leaking from the 510 can cause autofiring issues if it bridges the gap between the button and contact!

The side panel is magnetic, and the magnets holding the panel on are surprisingly strong, and large cut outs allow you to push your Squonk bottle to feed juice up to your RDA, and a second cut out makes your battery partly visible and acts as a large vent hole. 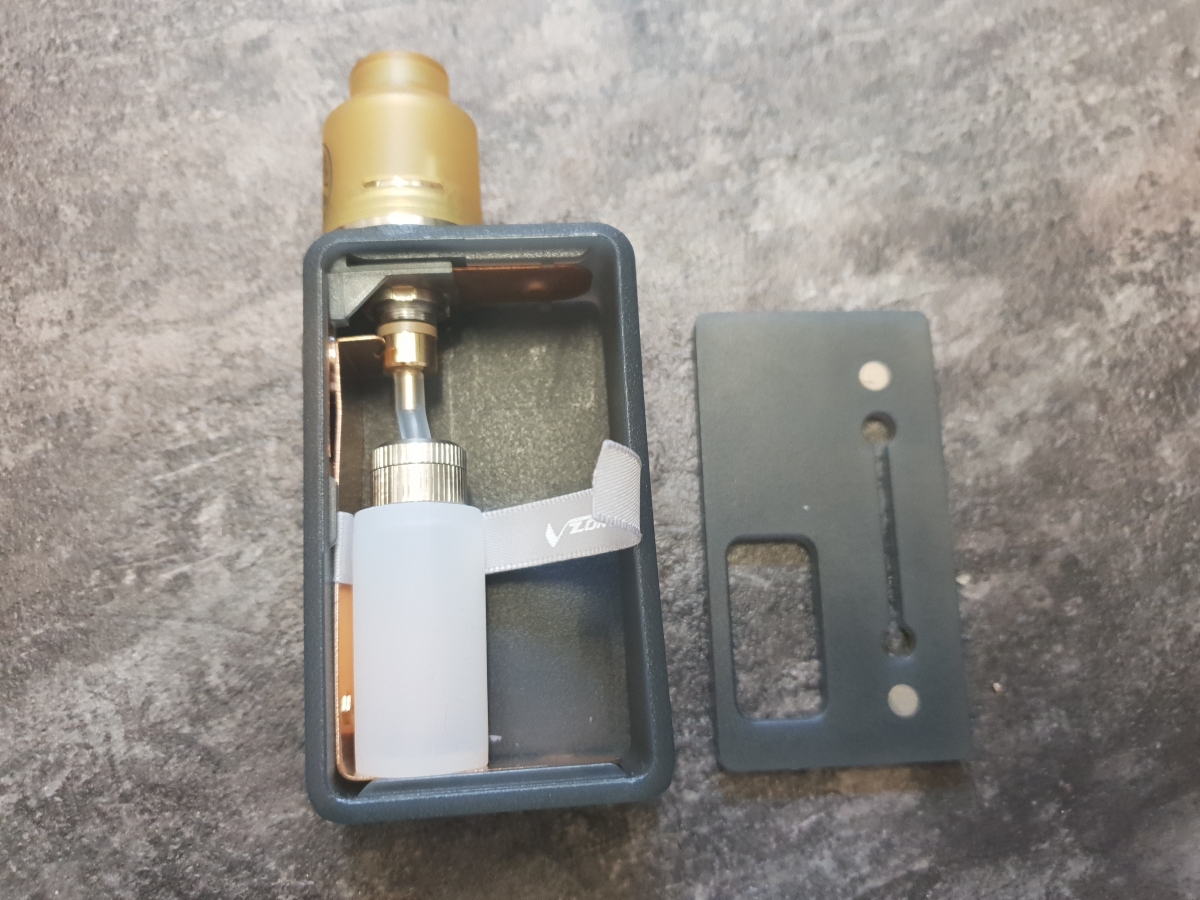 The type of squonking bottle that comes with many budget squonkers can be a sticking point for many potential buyers, but I’m pleased to report that the Simply Squonk Mod bottle works great! It holds 5.5ml of juice, and has the same feel and responsiveness as some of its more expensive counterparts. 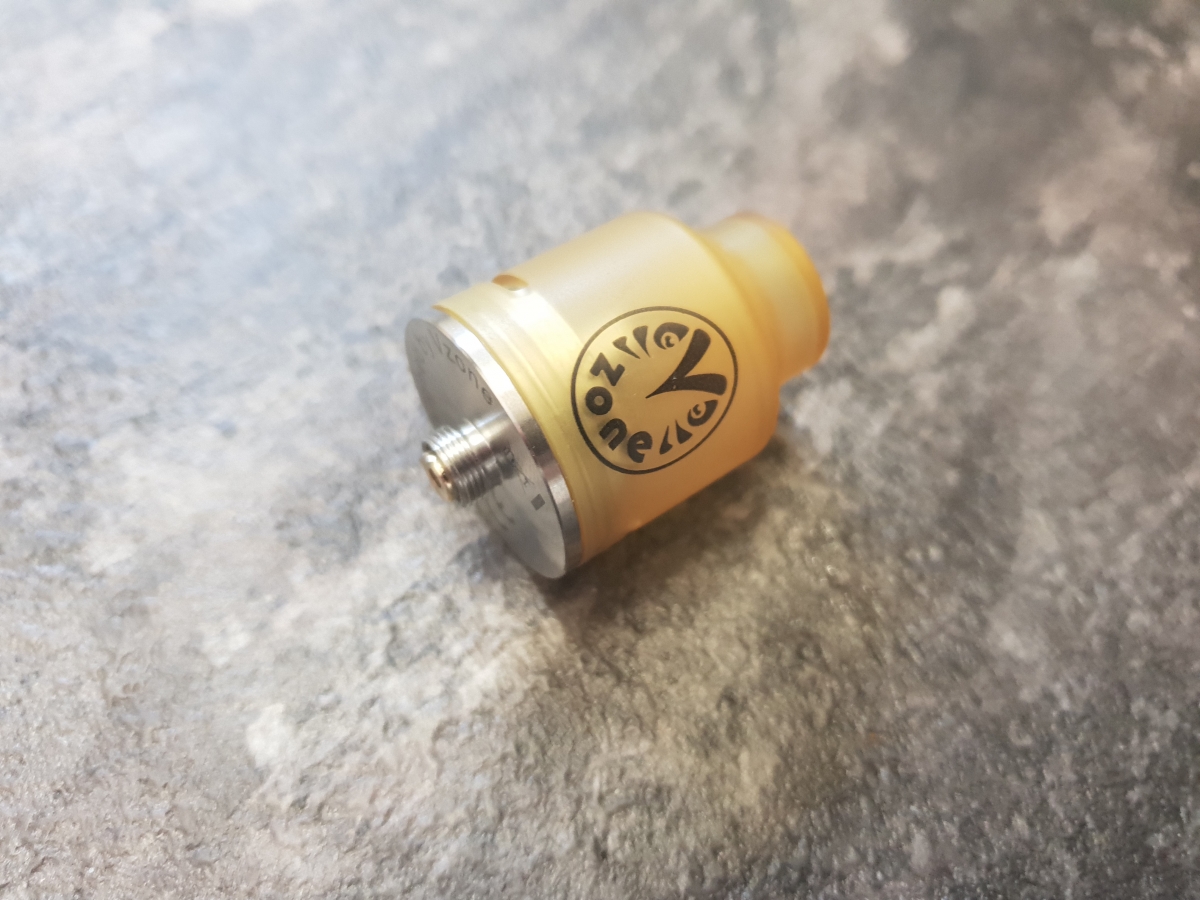 Airflow is located at the base of the deck, two very large airflow slots are found at either side, and these can be tightened down by rotating the topcap. An issue with the positioning of the airflow is that it can leak Juice quite freely if you oversquonk, so you need to be careful not to do so. This is also a dual coil only RDA, so you can’t close off one side of the airflow.

A two post deck is found here, with plenty of room to build and large post holes for mounting large and exotic coil builds. You also have the option of switching one of the post screws from the side to the top of the post, opening up more rebuilding options. 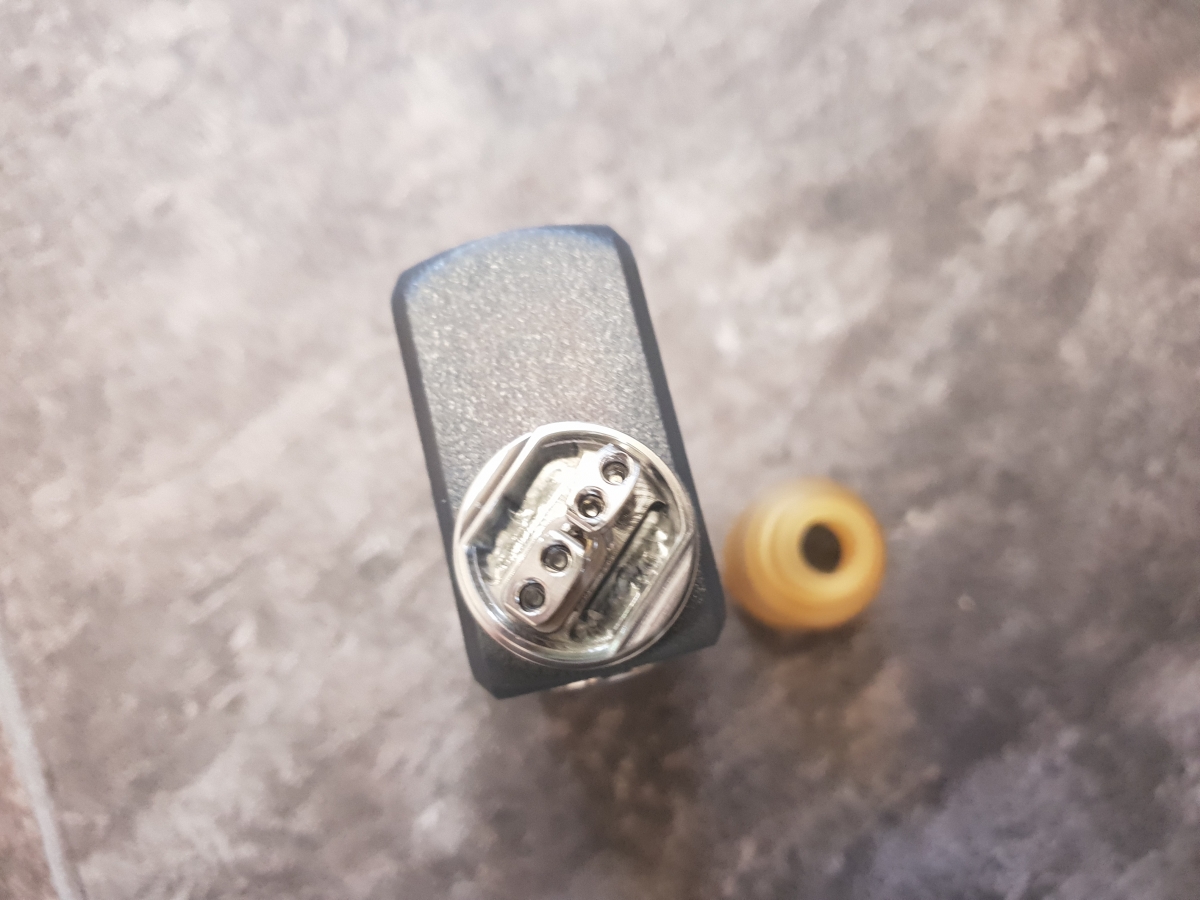 Moving onto the Simply Squonk RDA, well...it’s ok. It’s nothing special in terms of clouds or flavour, it will do the job for you if you don’t have any other bottom fed RDAs to hand, however I’d recommend looking at purchasing one of the myriad of budget bottom feed compatible RDAs out there to sit on top of your Simply Squonk Mod. Something like the Wasp Nano or Gas Mods GR1 will be an improvement, without causing a big dent in your finances!

Simply put, the VZone is a good entry level squonking kit for someone who wants to give mechanical squonking a try, but doesn’t want to spend a significant sum of cash on their first kit! It also makes for a more than capable backup to your more expensive gear, and it’s well worth a go for the price!

Many thanks to VZone for providing us with the Simply Squonk Kit to review! If you like the look of this kit then you are in luck - we have two to give away!  Check out the competition here https://www.planetofthevapes.co.uk/competitions/win-a-vzone-simply-squonk-kit.html. 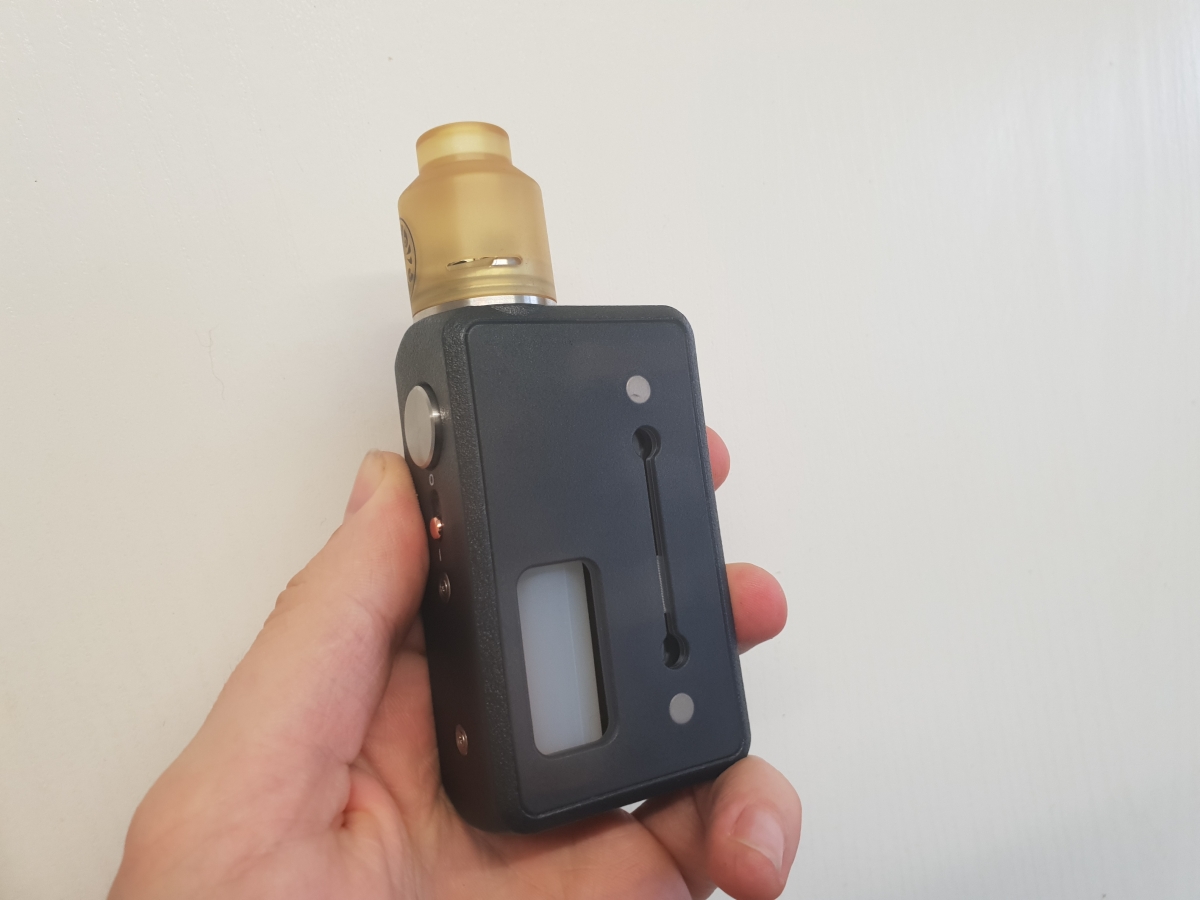