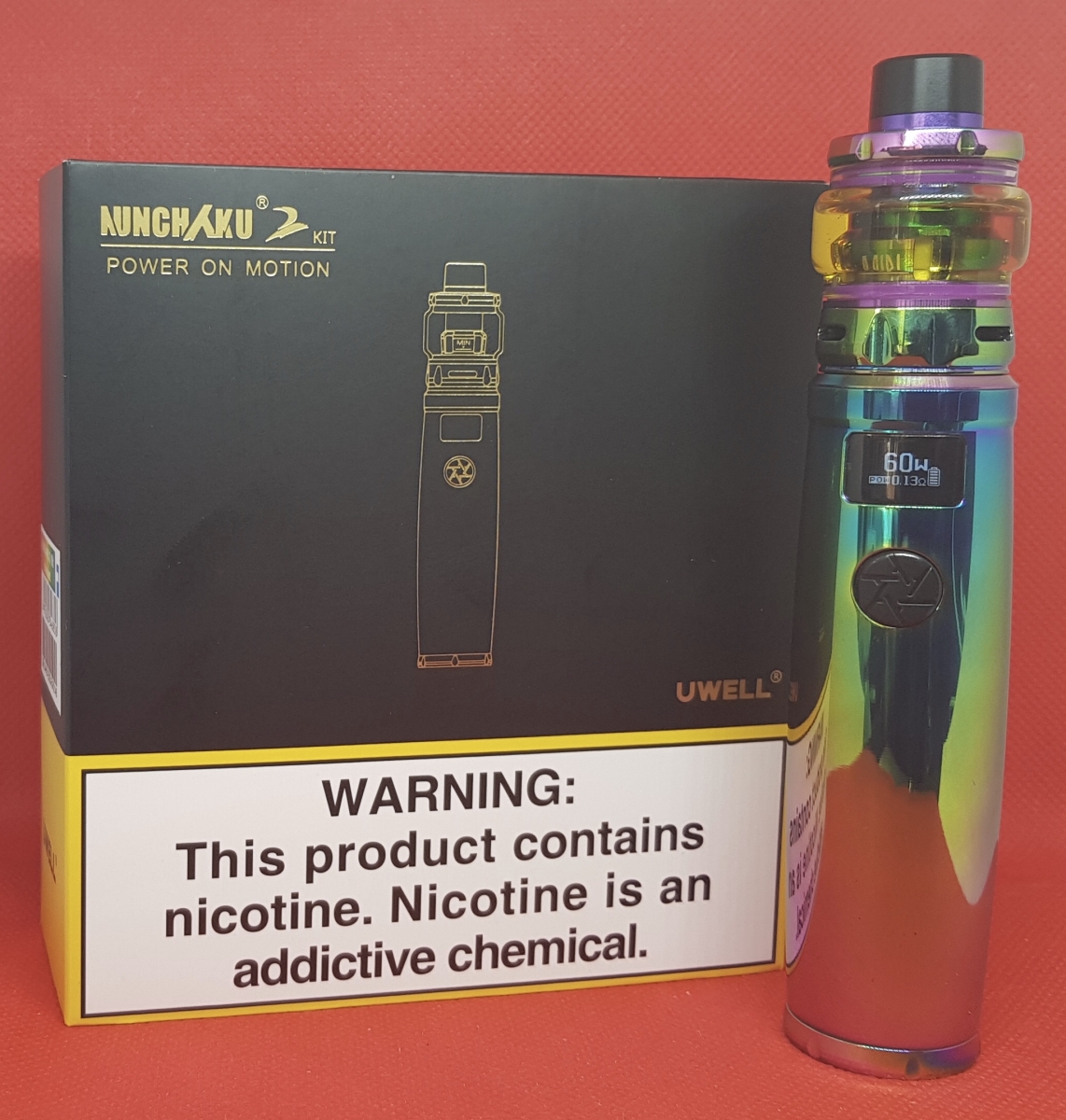 Healthcabin have kindly sent over the Uwell Nunchaku 2 Kit for review.

It’s no secret that I’m a sucker for classic tube style mods so I was very excited to get this in for testing as I was a big fan of the original Nunchaku kit when it was released all the way back in 2018. Many reviewers at the time already questioned the wisdom of releasing the nunchaku as an 18650 mod so will this updated 2019 version with 21700 compatibility live up to my expectations or has it been left behind by the raft of other single battery 21700 mods made available since? 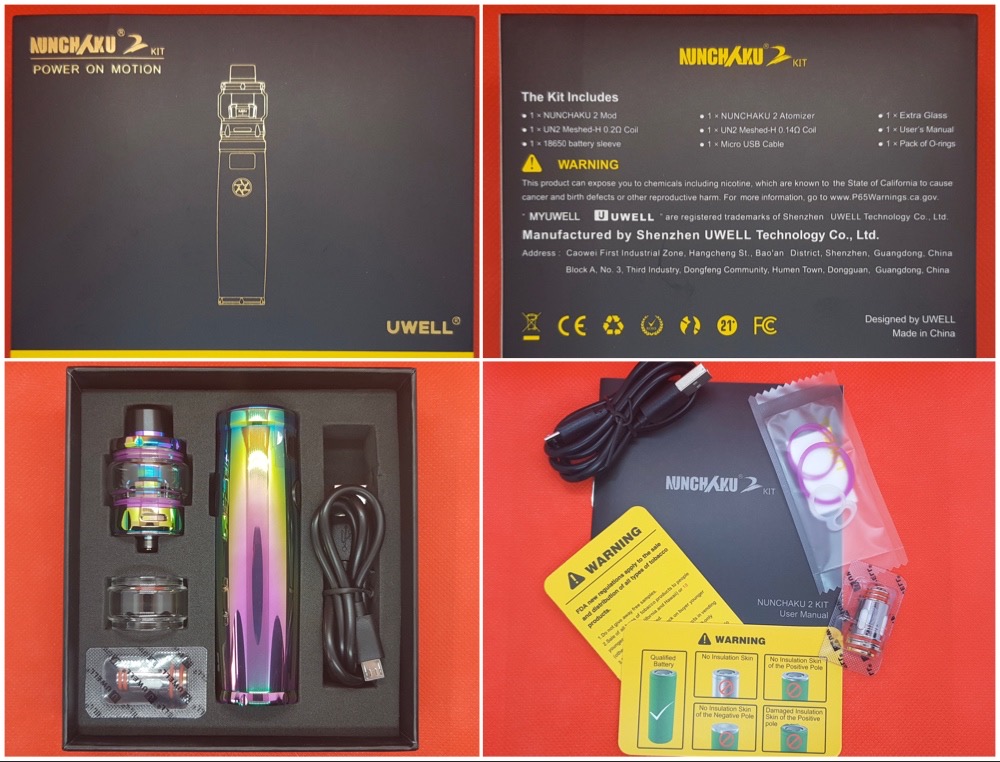 As always with Uwell products, the packaging is very slick and almost understated with a gold on black motif on the front, clear package information on the back, colour choice and serial number on the side. Removing the outer sleeve reveals a classic Uwell branded black box and lifting the lid, everything is clearly laid out in a single layer for you to see once you’ve removed the obligatory paperwork from the top. The supplied kit is “iridescent” (rainbow) which is coincidentally the colour I bought my original nunchaku kit in, it’s also available in blue, black and stainless finishes. 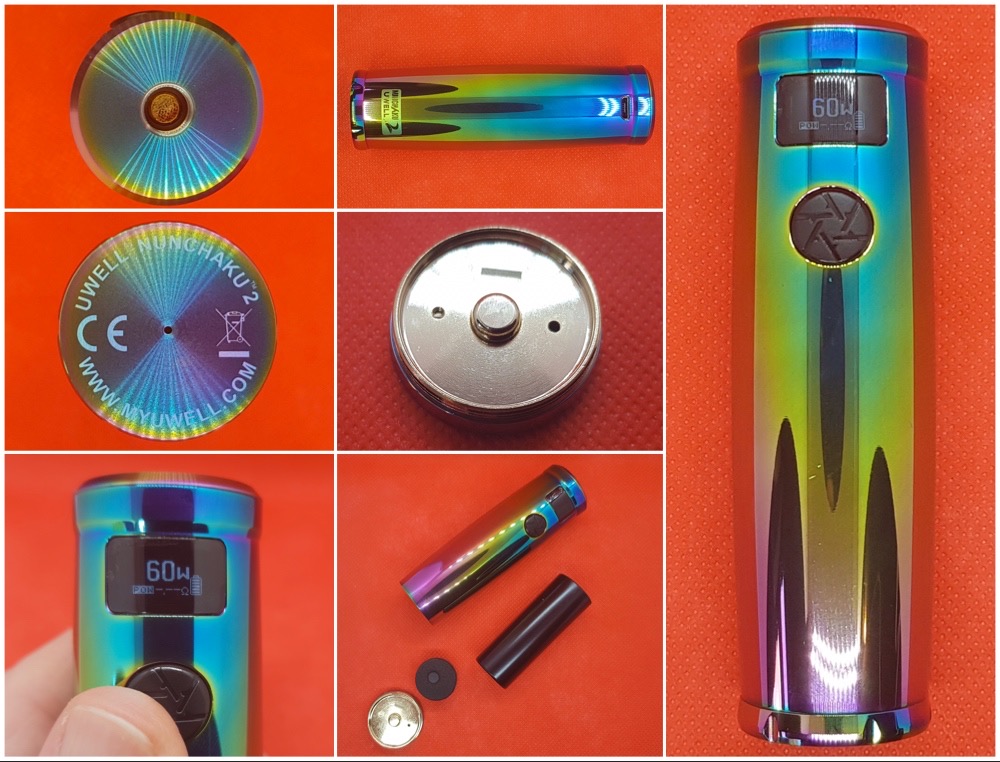 The mod closely mimics the original design although it’s had to gain a little bulk to accommodate modern 21700 batteries. It’s still only a couple of millimeters wider and about 5 millimeters taller though, and instantly manages to feel familiar despite a few other design tweaks.

The small screen has been moved from the bottom of the mod to the top, and the up/down buttons have disappeared entirely to be replaced by a single large power button which sits underneath the screen. Personally I would have preferred the position of these to have been reversed as I find my thumb naturally comes to rest where the screen is, it’s not too much of an issue though as I quickly found myself adjusting to the layout and using the heel of my thumb to press the fire button instead.

Everything on the Nunchaku 2 mod is done via the single power button and an internal gyroscope. Tapping the button three times quickly brings up the selection screen and tilting the mod left and right allows you to change options, another tap of the button will select the currently displayed option. This takes a little getting used to and can occasionally get a bit frustrating when changing wattages etc. as the built in acceleration always seems to know when you’re exactly 1 watt away from where you want to be, one blink and you've suddenly gone 20 watts past, grrr!

Around the back is the micro USB charging port. Uwell claim a 2 amp charge rate and in my tests it achieved about 1.7 amps, so if you must charge your battery internally it’s pretty quick. The mod did get a little warm during this test though which lead to my atomizer leaking, so I’d advise removing any tank before doing this and, as always, using an external charger is preferable and will improve the lifespan of your mod.

Up top the 510 platform is 25mm across with a fairly stiffly sprung 510 pin, the threads are nice and smooth and I’ve had no difficulty using other atomizers on here unlike a recent smok mod I reviewed. 24 and 25mm atomizers fit perfectly whilst maintaining a clean look, anything smaller like an older 22mm atty can look rather jarring and out of place though, and obviously anything larger will overhang, again ruining the overall aesthetic.

The battery cap screws onto the bottom as with the original but has lost the deep cut lines and gone for a cleaner less busy design whilst also having a slight flare out at the base which improves stability whilst standing upright. The inside of the cap has a clearly marked negative sign, with a complementary positive sign clearly visible at the other end of the battery tube, and the negative contact in the cap is spring loaded to take care of any potential battery rattle. There was no battery rattle with 20700 batteries and the battery compartment also passed the oversized 21700 test using a Vapcell 21700 which I know often defeats other mods, although it has to be said it was a tight squeeze. The inside of the tube has a large polycarbonate liner as well so you should be well protected from internal shorts.

The nunchaku tank has also had an overhaul in this updated kit. It’s much squatter and fatter than the original version but still holds the same 5ml of eliquid thanks to the included bubble glass. There’s even a spare bubble glass in the box as well. The top cap now has a latch system rather than the older screw on top, and is opened and closed with just a quarter turn. Everything is sealed with a combined o-ring/fill port gasket. This is both a pro and a con, I find that it sometimes grabs on and takes a fair bit of force to open and close the tank, but applying a little bit of downward pressure on the top cap helps tremendously and soon it becomes second nature. The gasket seems to do a pretty good job of keeping everything nicely sealed as well and again, there’s a spare included in the kit. Airflow is adjusted with three large cyclops intakes on the base as in the original.

Two mesh coils are included a 0.2Ω kanthal mesh, and a new 0.15Ω stainless steel mesh coil which Uwell suggest you use in temperature control (TC) mode, both are a single mesh coil with a suggested wattage range of 50 to 60 watts. They employ the same press fit method as before and are backwards compatible with earlier Nunchaku coils (and tanks), so if you have a bunch of those lying around you can use those as well. 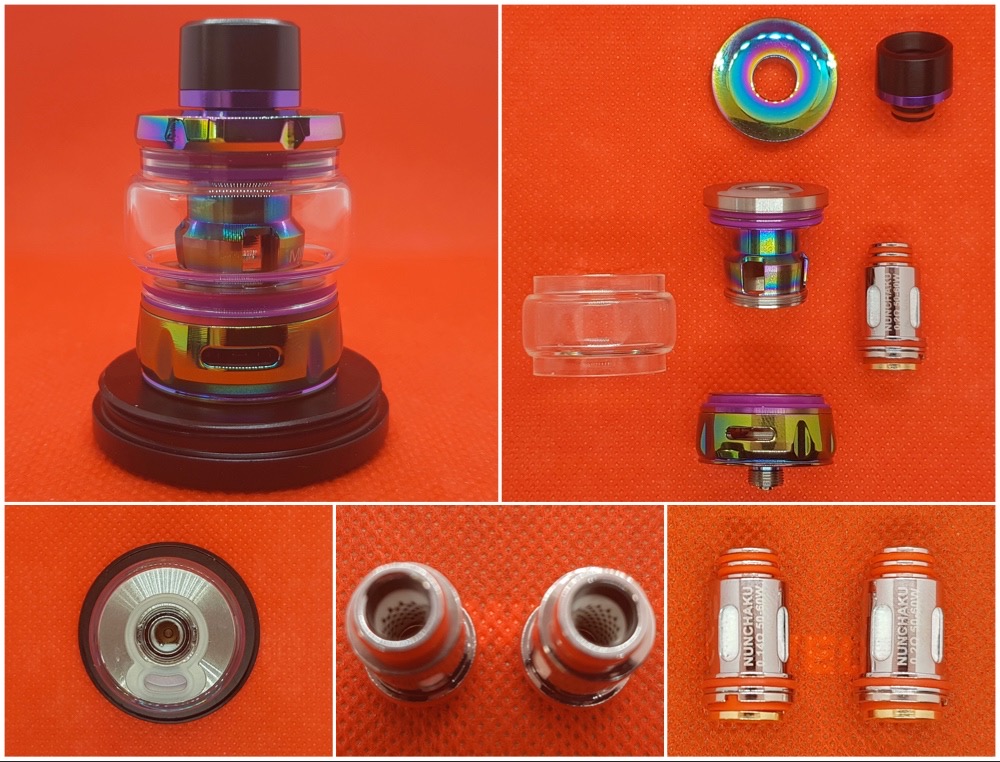 I’m very familiar with the 0.2Ω mesh coil as I’ve been using them for the past several months in my Nunchaku v1 tank, so I opted to go straight to the 0.15Ω coil to see how it compared. In power mode, the flavour and cloud production were easily on par with the 0.2Ω coils and those are some of my favourite mesh sub ohm coils giving bags of flavour and good coil life, and I can generally get one to two weeks out of a coil when using it as my primary vape.

One of the supposed benefits to the new 0.15Ω coil is, of course, that you can also use it in TC mode if you desire, so I decided to give that a whirl. Three clicks, tilt select TCR mode, select desired temperature.. click, select pre-heat boost wattage… click, select desired tcr value. Uwell suggest a TCR of between 0.00088 and 0.00092 for stainless steel and no go… the tank stubbornly refused to produce any vapour at all. Swapping the tank to a mod that I know works well in TC mode and things were working perfectly so the tank/coil is clearly capable of working in TC, so the fault must lie with the mod. I then went back to the Nunchaku mod with one of my favourite TC rtas and, after a little experimentation, I discovered that a TCR value of 0.00120 yielded much better results and it even passed the cutoff test once I’d vaped the tank dry, no burnt hits here and a big thumbs up. The 0.15Ω nunchaku coil also worked well with this new TCR value if TC is your thing.

This is everything I wanted from my original Nunchaku kit, the added battery life from 20700/21700’s vs 18650’s easily outweigh the slight increase in size and weight. The single button operation takes a little getting used to but only adds to the clean looks of the mod. The Nunchaku 2 tank and coils perform exactly the same as the original, but I much prefer the cleaner straighter lines of the v1 tank over the chubby v2, so going forward I will probably use that instead, but if you don’t already have that, the updated tank is still one of the best sub ohm tanks out there. This is a highly recommended bit of kit and if you skipped over the first version because of the 18650 battery then this is most definitely worth a look this time around.

Many thanks to Healthcabin for once again supplying another great bit of kit for review. 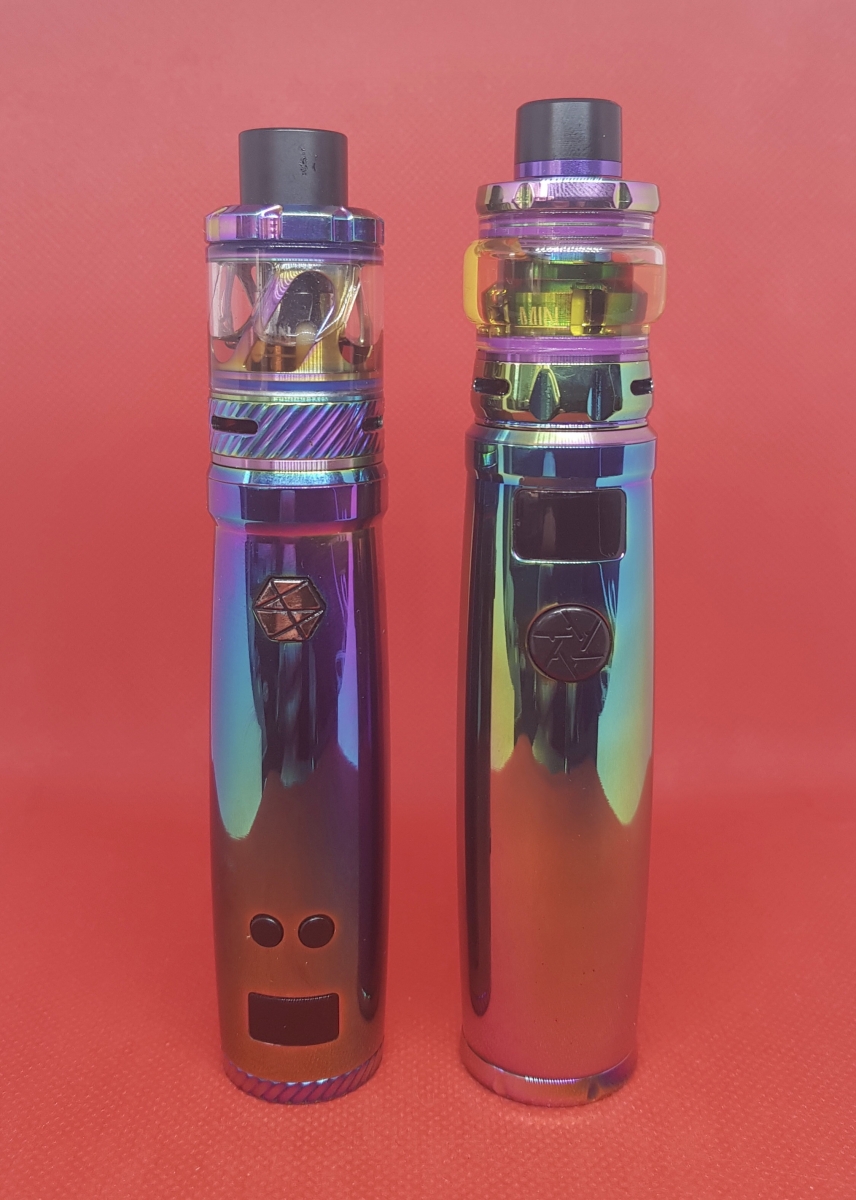