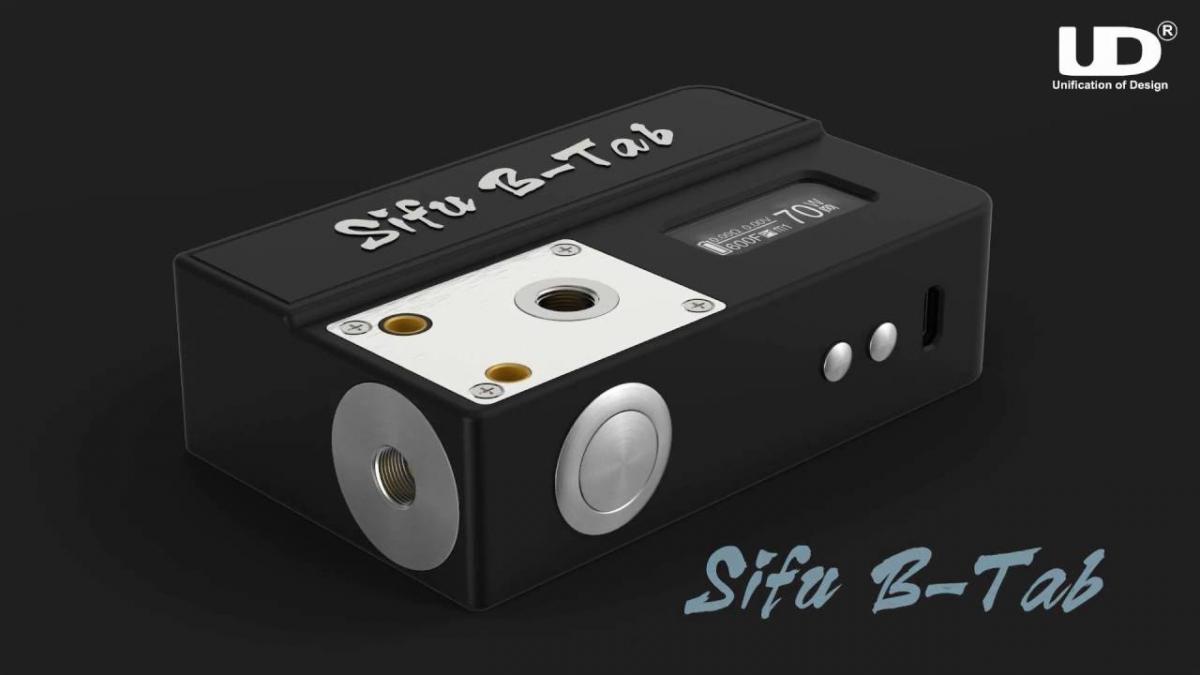 According to Wikipedia, Sifu is the Cantonese spelling of Shifu, which is a word that has a different meaning depending on the context in which it is used. It is used as a title for and role of a skilful person or master, and this is also the name given to a new release from UD, the UD Sifu B-Tab.

The UD Sifu B-Tab is a 70W box mod manufactured from aircraft grade aluminium, with temperature control support built in for Ni200, SS 316L, Titanium and TCR input, but what really makes this device stand out from the crowd is that it features two 510 connectors - one at the top just like a traditional box mod, and another at the side of the device so that you can use the UD Sifu B-Tab as a coil building platform, with resistance read accurately to 0.01ohm, coil burning function, and multimeter functionality for testing your coil resistance before installation.

The UD Sifu B-Tab is quite unlike anything we have seen yet, but is it a must have device or a gimmick? Let’s find out... 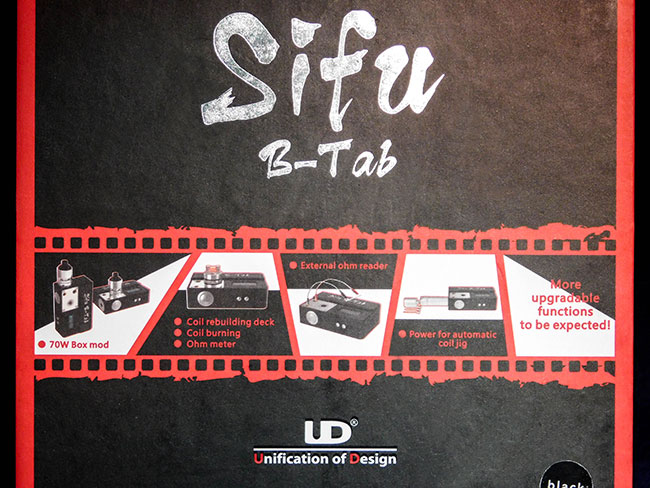 The UD Sifu B-Tab comes in a very well presented presentation box, and inside there you will find the UD Sifu B-Tab itself, a micro USB cable, multimeter wires with alligator clips and a user manual.

Constructed of aircraft grade aluminium, and measuring in at 90mm x 55mm x 26mm, the UD Sifu B-Tab is a robust and well built device, built to withstand day to day usage, however given the size it is pretty bulky too. In fact, I was pretty surprised when I removed the battery door to find out that it was a single 18650 battery device, I was expecting it to take two 18650’s batteries to be fair! It feels pretty weighty as well, yet still comfortable to hold and operate in hand. 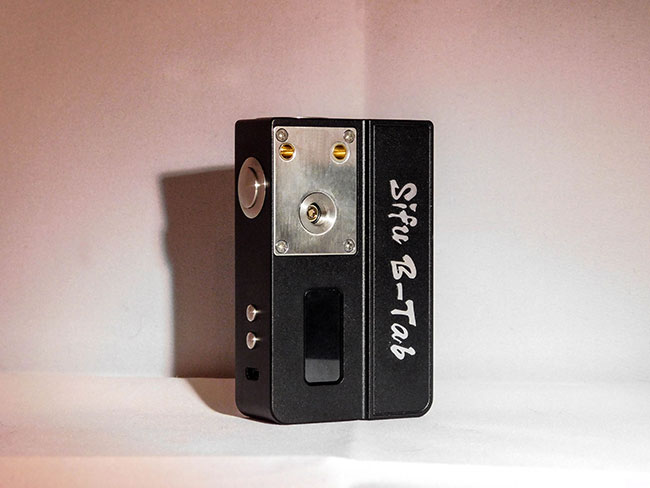 The battery door cover at the back features strong magnets to hold the door in place, and the door can be flipped over when using the UD Sifu B-Tab as a coil building tab, as it features a non-slip surface on the back allowing the UD Sifu B-Tab to remain stable when used on a flat surface. That’s a nice touch from UD and works very well in practice.

One of the most noticeable visual aspects of the UD Sifu B-Tab is that it sports two spring loaded 510 connectors with brass centre pins, one at the top of the device and one at the side, which allows it to be used as a traditional variable wattage device as well as a coil building tab as well. Above these, are two slots for the multimeter wires to be slotted into. 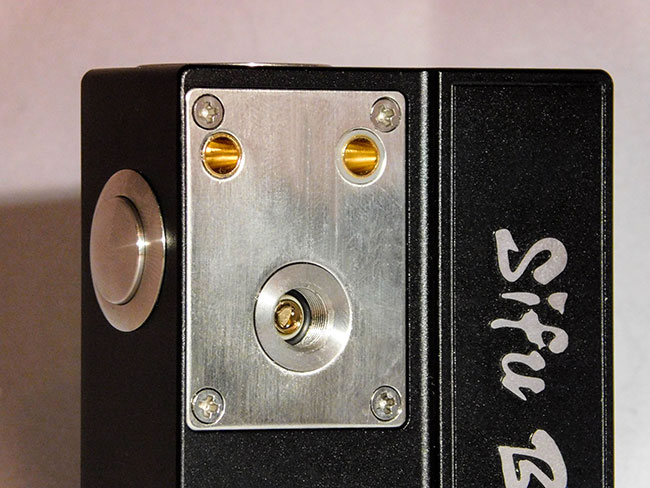 A large stainless steel fire button is found at the side of the unit, which is smooth and tactile, as well as two smaller stainless steel buttons which act as the up and down button. A clear OLED screen is present, and the screen colours can be reversed for those with sight issues, this displays a wealth of information such as battery level, voltage, current output mode, resistance, amps and power/temperature limit. When using the UD Sifu B-Tab as a multimeter, the screen will change so that only the coil resistance is displayed.

The UD Sifu B-Tab also has a USB port at the bottom of the device, so that you can charge your device through this port, and UD also say that future firmware upgrades are planned for this device. 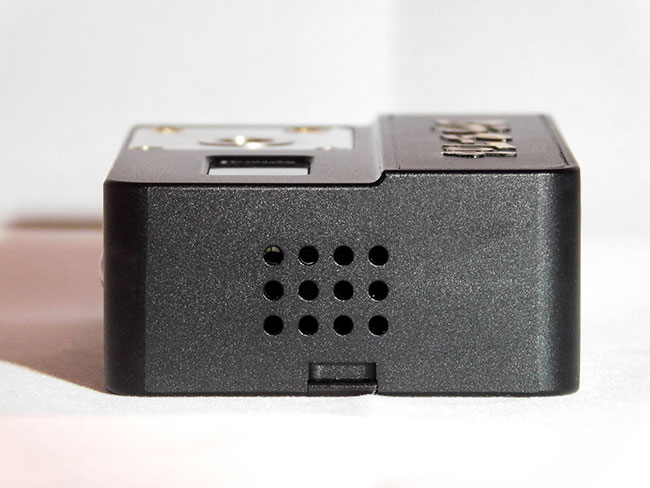 The unique selling point of the UD Sifu B-Tab is that you can lay it on its side, build and test fire your atomiser using the side mounted 510 connector, then once finished you screw your atomiser into the 510 connector at the top of the UD Sifu B-Tab and use it like a traditional mod, with all the functionality you would expect from many premium single 18650 battery devices.

Using the UD Sifu B-Tab as a coil building tab works extremely well in practice, and this is the what I mainly use my UD Sifu B-Tab for. Simply flip the battery door cover over to expose the non-slip coating, and lay the UD Sifu B-Tab on its side. Screw your atomiser into the 510 connector, and you’ll be able to install your build and test fire it as well, and the OLED display will show you the resistance of the build. It will fire coils down to 0.05ohm in this mode, making it ideal for building temperature control coils on too. You can use the multimeter wires to test your coil resistance before you install it, so you know you have the resistance you wanted before you install your coil, by inserting the multimeter wires into the slots and clipping the crocodile clips to your coil legs. Safety features such as low resistance and short circuit protection are featured to protect you during usage.

The second feature of the UD Sifu B-Tab is that you can use it as a 70W box mod too, by installing an atomiser at the 510 connector found at the top of the device. There is plenty of power here, which is delivered accurately, I found no issues with power fluctuation. You can fire atomisers right down to 0.15ohm resistance in power mode, and resistance is read accurately to 0.01ohm, making this ideal for most sub ohm builds.

Temperature control is also supported by the UD Sifu B-Tab as well. You have support for Ni200 coils, Titanium coils and Stainless Steel 316L, there is also a custom TCR input too meaning you can input the coefficients for certain temperature sensitive wires. Resistance is read down to 0.1ohm in temperature control and the UD Sifu provides a consistent and accurate performance in TC mode.

I do find the UD Sifu B-Tab too bulky to carry around out and about with me in my pocket, I much prefer taking out my smaller single 18650 battery mods with me. Battery life can also be fairly limited as well, especially if you like vaping frequently at over 30W, you can recharge via USB and the magnetic battery door gives quick and easy access to the battery compartment for battery swaps.

I can’t fault the performance of the UD Sifu B-Tab, because it’s a simple to use all in one device that does what it is intended to do very well, but I am just struggling to see who this is likely to appeal to, especially when it has a pretty premium price tag attached to it that dwarfs the cost of many similar spec single 18650 devices, not to mention the cost of stand alone coil building tab devices for building and test firing coils. It’s also a pretty bulky device to carry around as well, smaller than most coil building tabs but much heftier than most single battery 18650 devices.

Many vapers are quite happy to build and test fire coils on their mods, or use a cheaper coil building tab for that purpose. Convincing them to shell out around £65 on the UD Sifu B-Tab may prove a bit of a difficult task, UD could have done away with the coil building tab function and manufactured a smaller and cheaper dedicated box mod, that I feel would have more appeal.

I can applaud UD for trying something a little different at a time where the market is very saturated and lacking in innovation when it comes to box mod devices, the UD Sifu B-Tab absolutely has to be one of the more unique devices available on the market today, and as I say there is nothing wrong at all with the performance or build quality of this device at all, I just feel that it is a very niche product that with how crowded and competitive the market is at present, it will unfortunately have limited appeal. 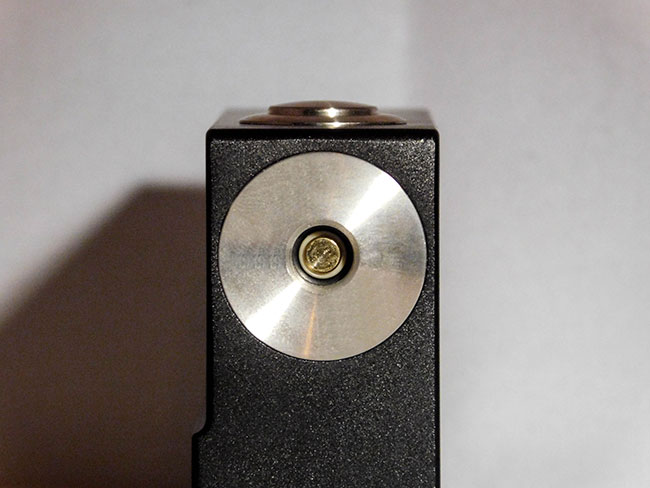