Whilst I was browsing over at Sourcemore, I spotted something that piqued my interest in the form of the Smok Fortis Kit. In a departure from their usual roster of pod mods and dual battery kits, they’ve actually slipped a single 21700 mod in under the radar, and Sourcemore have been kind enough to send it over for review. 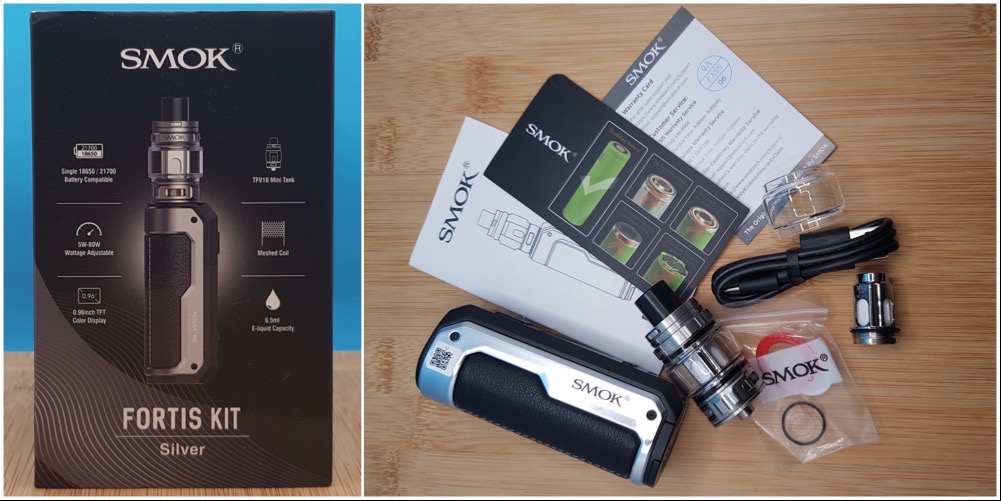 The Smok Fortis is available in six colours, and Sourcemore sent out the “Silver” version for review which has a striking black chassis with a slightly matte silver frame around the sides and back. As this is the international version, it also came with the TFV18 mini tank and two identical 0.2ohm mesh TFV18 Mini coils, however the TPD versions will ship with the TFV mini V2 instead. 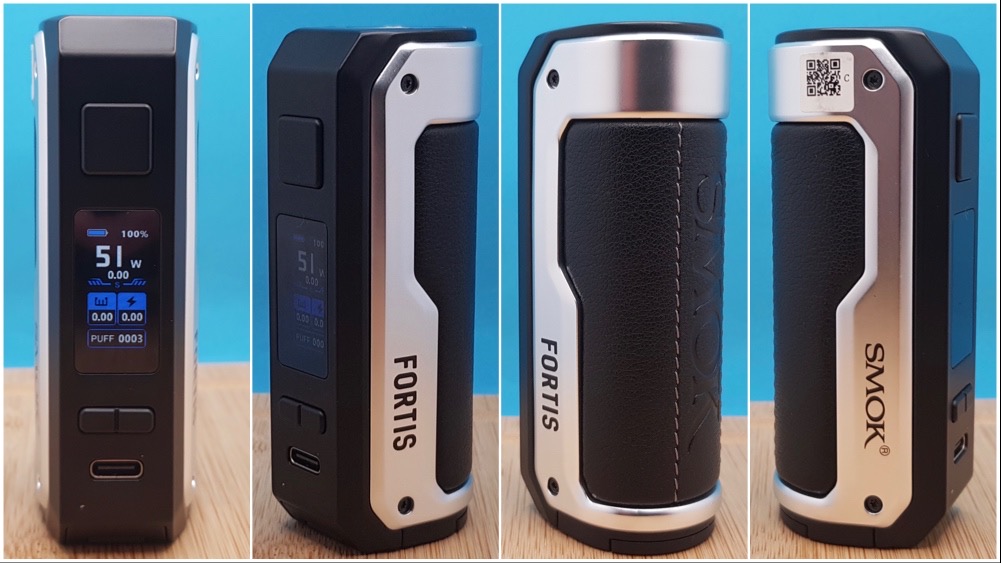 The Fortis mod has a classic flattened teardrop design with a black chassis, there’s a lightly padded “leather” grip down the back which is held in place by a coloured frame running around the sides and the back (silver in this case). The branding isn’t over the top either with simple “Fortis” and “Smok” logos on the sides and a further “Smok” logo embossed into the spine of the “leather” grip.

When I first picked this up, I thought the chassis might be made from a hard plastic due to the weight and the texture of the paint. It does, however, appear to be largely constructed from metal with some minor plastic parts like the buttons. Short of pulling the thing apart and destroying it, I can’t be 100% sure and neither the manual or website state the construction material(s) used. Having said that, it does feel well put together with just a tiny bit of button rattle on the up/down buttons, and the paintwork has held up well despite being thrown around in the cars at work all week.

Everything here is nicely proportioned so it feels comfortable to use with all the controls falling nicely under your fingers, it also feels just as good to use as a thumb firer. As you might expect these days, there’s a 0.96’ colour screen nestled between the control buttons, and the information is all laid out clearly so no complaints there either. 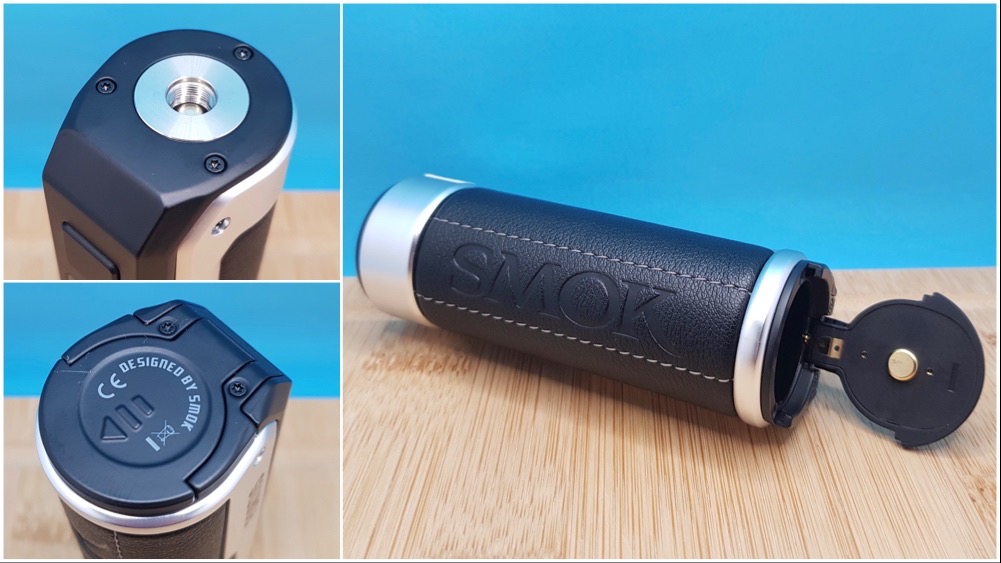 On top, there is a stiffly sprung 510 platform, this is absolutely flush with the top of the mod so if you want to avoid the dreaded atty rash then you’re going to need to use an atty gasket here, but at least you shouldn’t encounter any visible gapping which I know drives some people to distraction. The top platform is about 29mm across so most atomisers will fit here with ease with zero overhang.

The battery door is the hinged/flip open variety and this closes very securely, the door hasn’t come open in use once. The polarity marking on the door could be clearer but there’s a very prominent red + mark at the bottom of the battery tube along with a spring loaded positive connection. The Fortis passed both my oversized battery tests, my “too fat” battery was a little snug but it was still easy to remove so I don’t think there’s any danger of a battery getting stuck if you use thicker wraps.

With a battery inserted, one of my few bugbears with the Fortis rears its head, namely an incredibly slow boot time. It takes almost seven seconds from 5x clicking the power button until you’re presented with an option screen to let the mod know if you’ve put in an 18650 or 21700 battery so that it can limit the maximum power output accordingly! Luckily there’s an option to lock the fire button with three clicks rather than turning it all the way off if this gets too annoying.

The board itself feels snappy and responsive enough, and there is some limited boost capability with a maximum 6.4 volt output although it does start to feel a bit weedy once the battery drops below about 20%. This is a wattage only board so if you want extra features then look elsewhere, but at least companies have stopped putting boards out of pod mods with no boost capability in a mod and calling it a day!

There’s 1.4 amp (max) charging on board via the USB-C port on the front, and in my test this peaked at around 1.24 amps. This actually saved my bacon one morning as I realised that I’d forgotten to change the battery before setting off to work, a quick charge in the car before arriving at the office got me through the day though, but as always I’d advise using an external charger whenever possible.

I don’t know how Smok manages it but the included TFV18 mini tank is just as fugly as all their previous TFV tanks. It still has the classic flip open top which means it’s easy to fill, but of course you do need to be wary of this coming open in pockets, and they still use a proprietary drip tip. The adjustable airflow has three gigantic cyclops inlets and I’m not joking when I say that you can breathe through this thing quite easily! On the plus side, this has two 6.5ml bubble glasses included so capacity isn’t a problem.

The one surprise here was the coils, you get two identical 0.2ohm mesh coils and Smok has even made it easy to find the coil material online… it’s Kanthal in this case which means I can use it. With the power set to 55 watts and the airflow half open, these coils have been giving me bags of flavour, they even wick well as I accidentally put some 80vg liquid in one day and they coped with zero issue. Coil life seems decent too, I’m on day nine at the moment and the first coil is still going strong…. the tank is still fugly though!

This is a bit of a hidden gem. I’ve been more than happy with the overall feel and performance of the Fortis mod and was pleasantly surprised with the TFV18 Mini coils even if the tank is ugly as sin.

Many thanks to Sourcemore for sending the Smok Fortis Kit out for review. As always they’ve given me a discount code for you to use: $39.54 - SMOK Fortis Kit Code: FORTIS 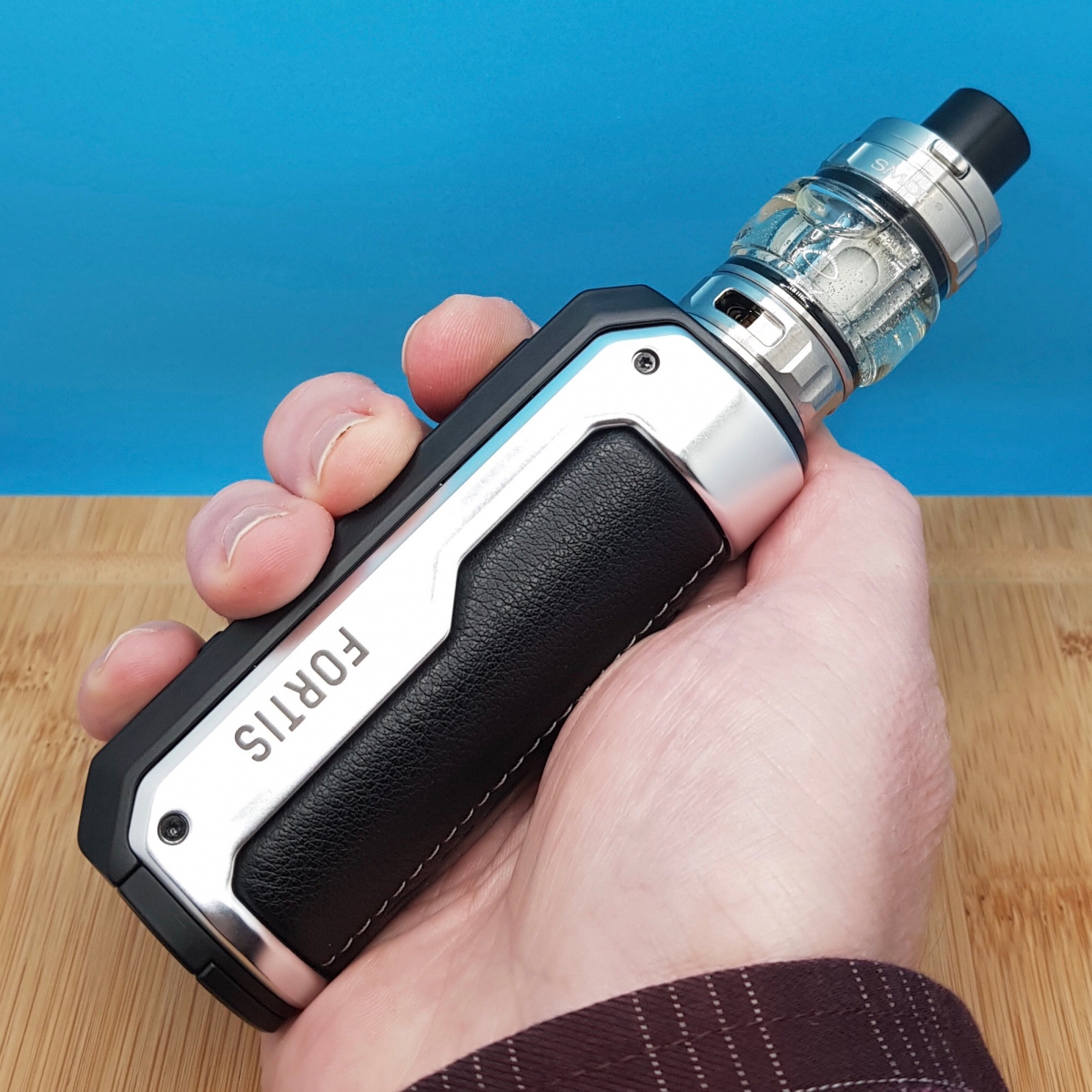