Supplied by Lost Vape for review.

I’ve been sent the latest release from Lost Vape Quest, the GRUS mod, which is a welcome departure from the hugely oversaturated pod/pod-mod/AIO market. Powered by single 21700/20700/18650 battery, it also fills in a gap as there aren’t too many single 21700 standard mods out there. So is it much cop? 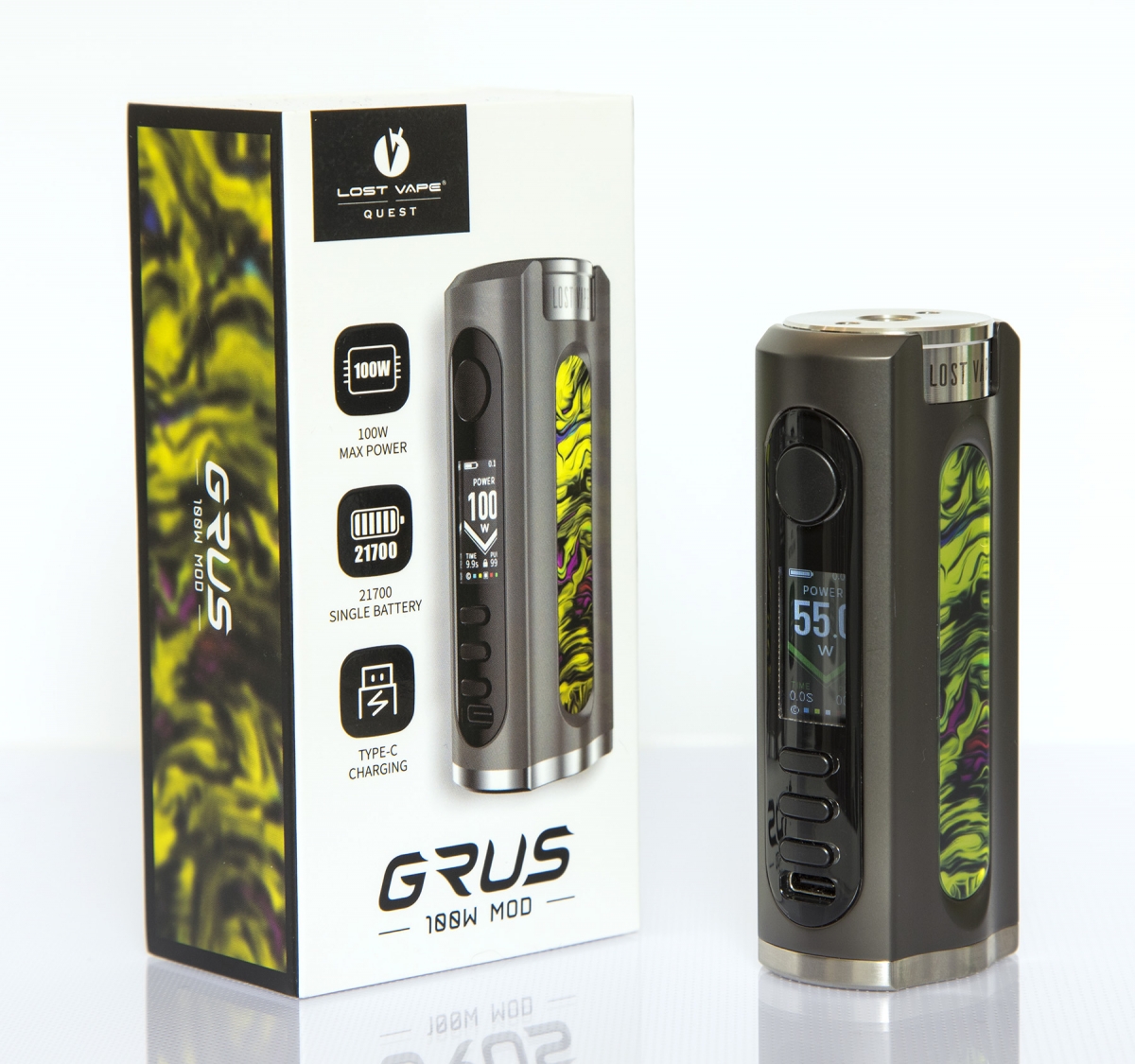 Don’t expect any game changing innovation, what you can expect is a very stylish and solid mod with enough features to satisfy most vapers.

The GRUS comes in a reasonably compact and sturdy box which feels weighty. There’s an outer sleeve showing your colour option, along with contents and authenticity labels on the back. The inner two part box is all white with a small Lost Vape logo which looks nice and classy. The lid is also notched which is ideal to open. 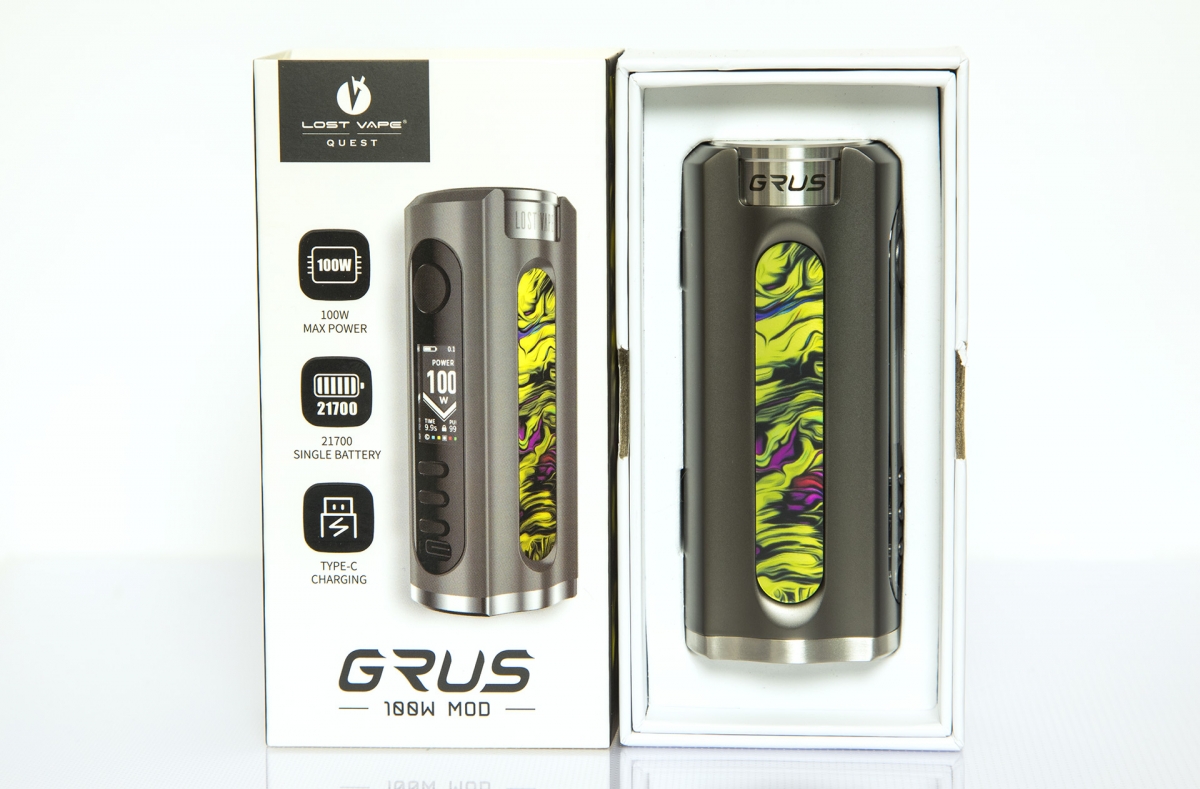 Included in the box

The usb-C cable and the 18650 battery adaptor are tucked into the battery bay. 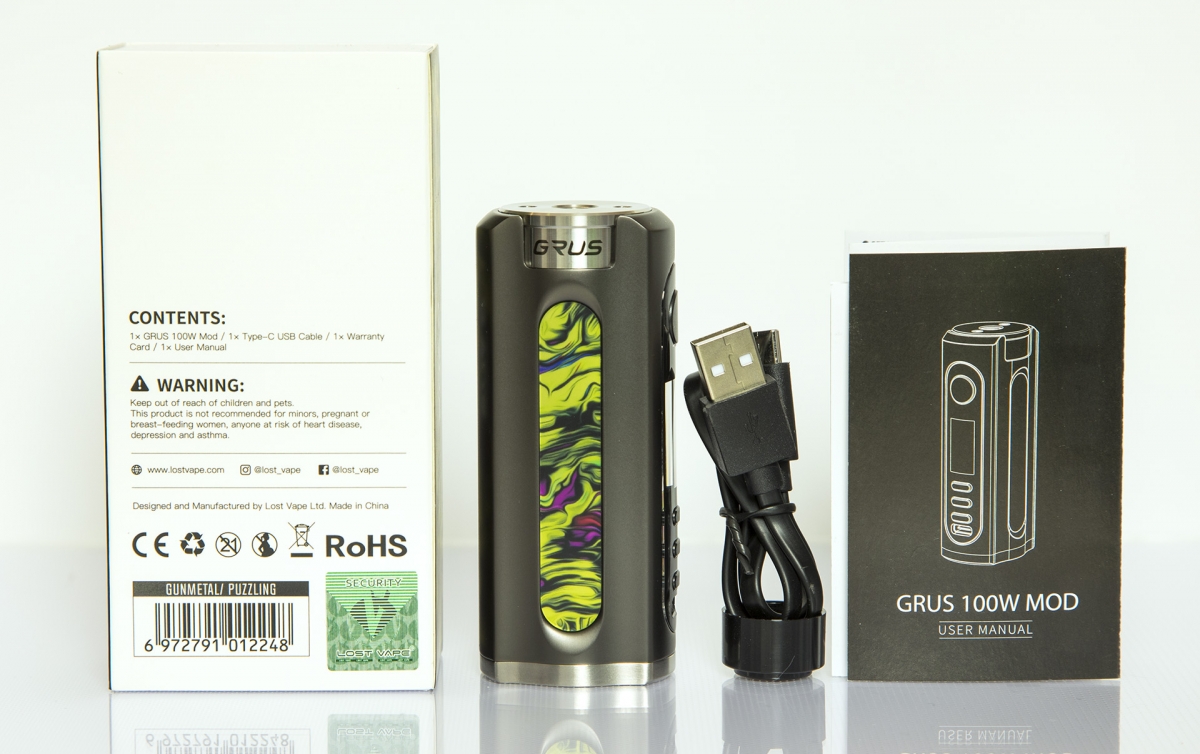 The GRUS is a very interesting mod to look at and to hold. The zinc alloy chassis makes it quite weighty but not too much, it just feels substantial and high quality. One of the most obvious things to stand out is the large 510 connector, 30mm diameter, which is one of the largest I have seen on a single cell mod

The construction and styling is clearly unique and finished off nicely with assorted effect panels offering a style to cater for most tastes.

It felt surprisingly comfortable in the hand as most edges have been smoothed off and the curves fit in your hand nicely, there’s a nice symmetry to it which I really like a lot. 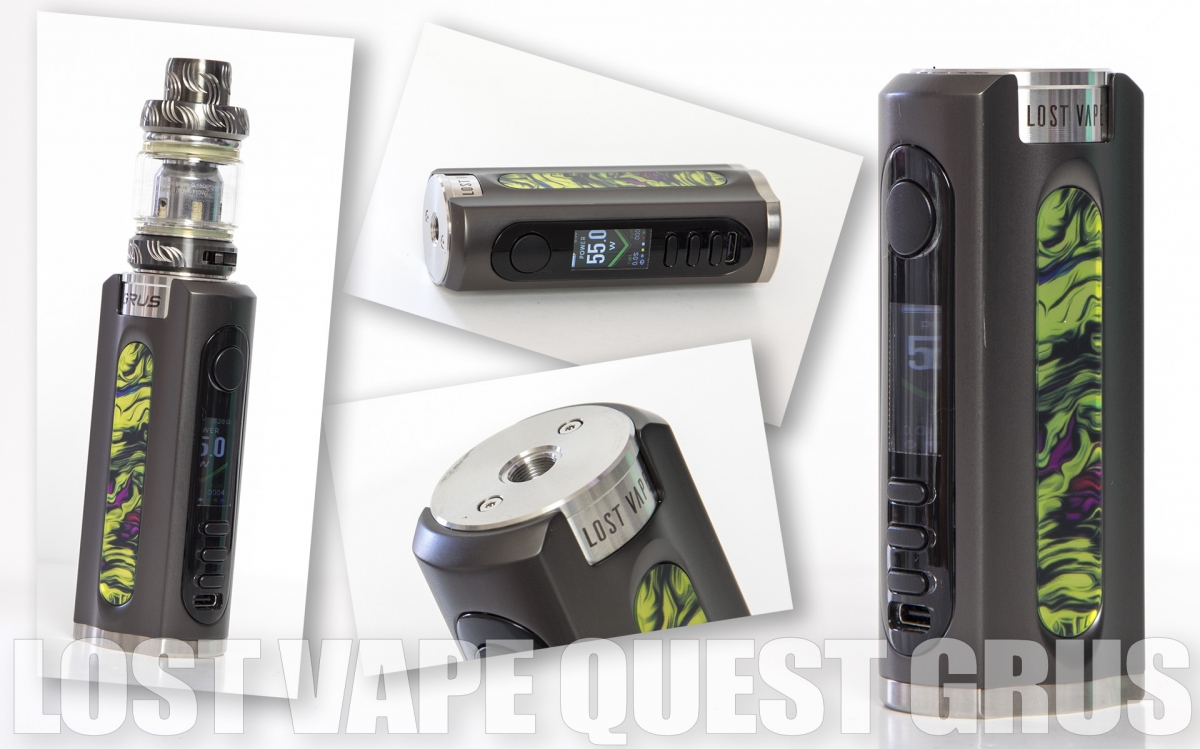 The GRUS comes in quite a few styles and the mixture of chassis finishes and side panels really give a different look to each, I would be happy with almost all of them. 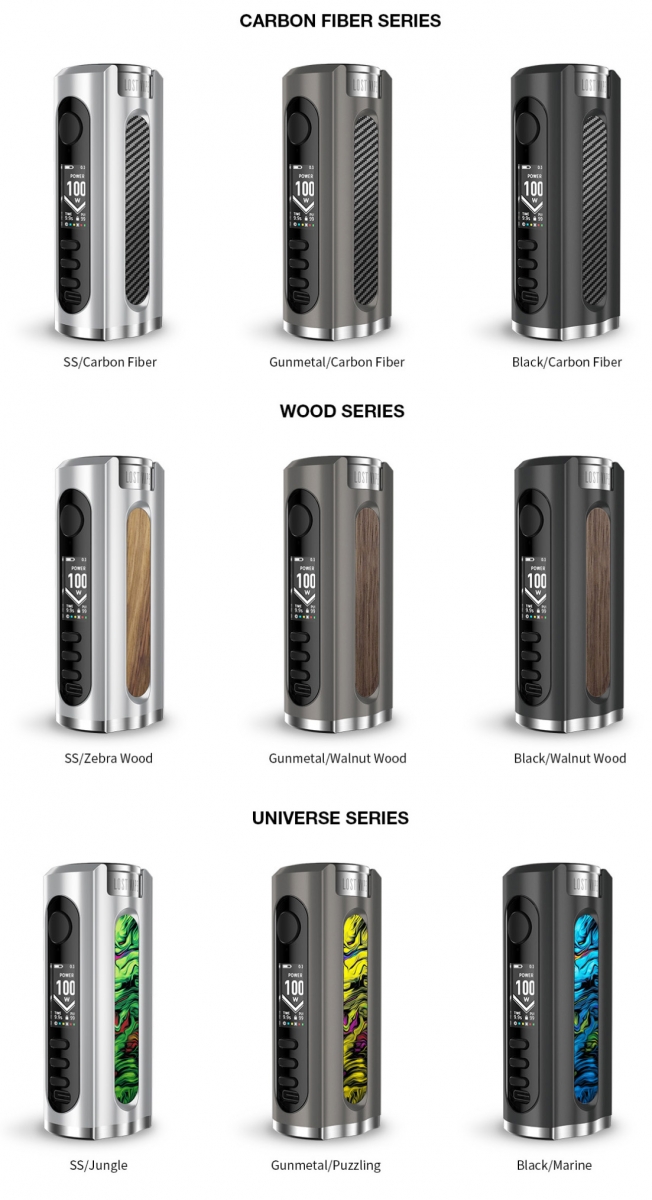 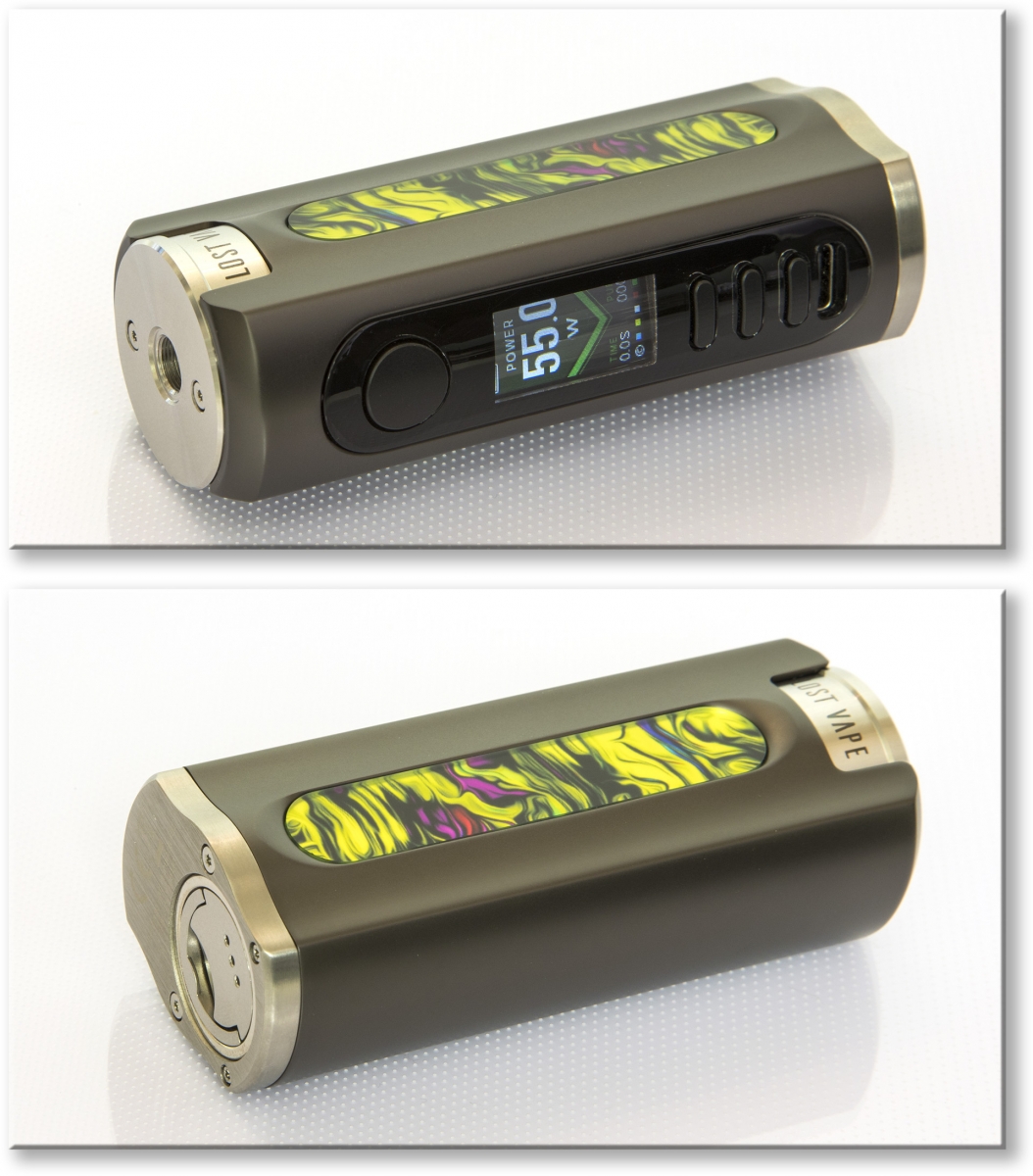 The side panels are superb, they have done the same as the Gemini on the resin styled editions and made them a satin smooth finish. I’ve heard people call them ‘stickers’ but I would class them as a quality adhesive panel. I cannot comment on the wood effect or carbon editions but I would imagine they are of an equally high quality.

I’m still undecided with the battery installation which is achieved via an old-school threaded cap underneath, it’s functional and really well made but I find it all a little too clumsy compared to other methods. That said, it keeps your battery very secure and it’s not going anywhere should you accidentally drop it. 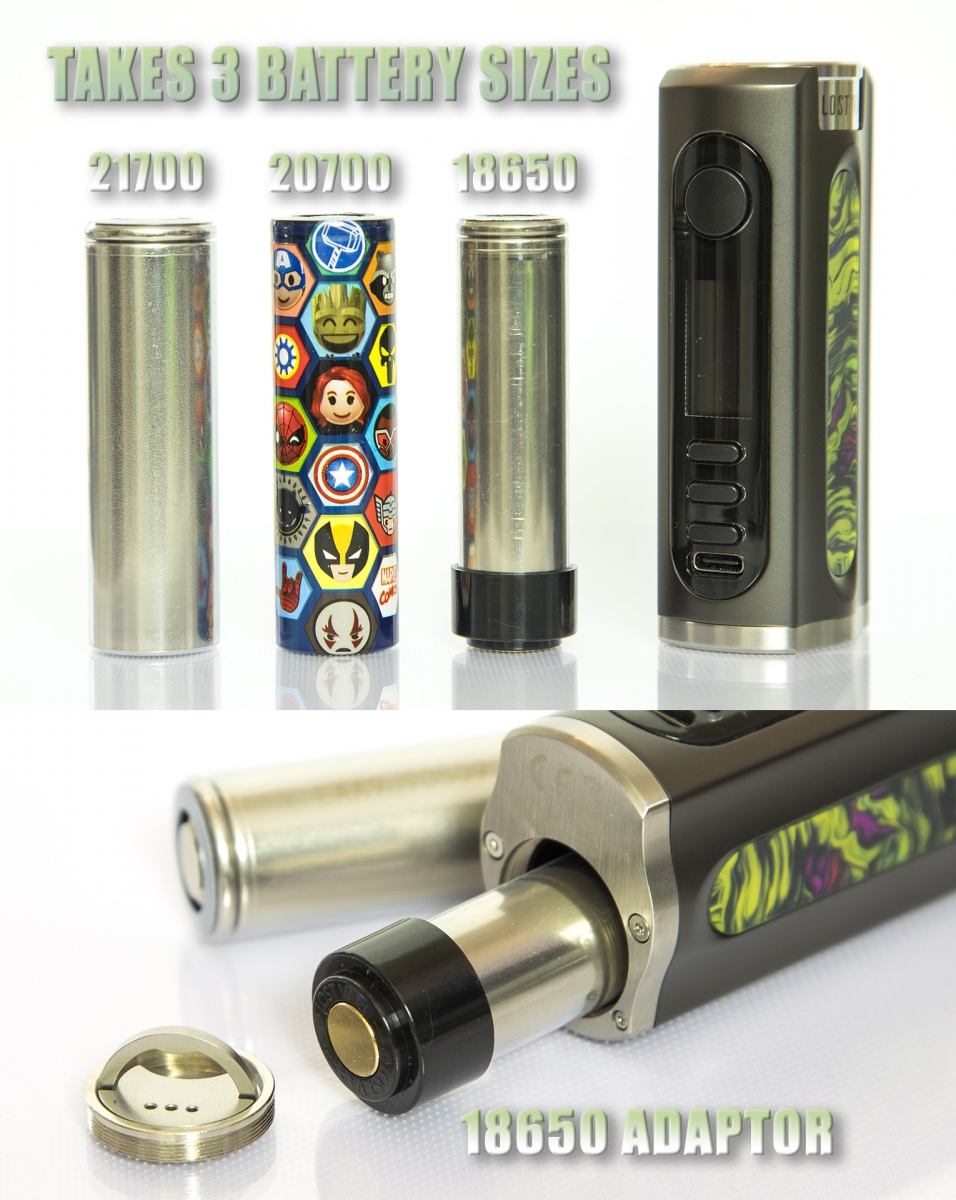 The 18650 battery adaptor is more a cap compared to longer sleeves I am used to, but it does do the job nicely without any rattle.

With the battery fitted (naturally I just went with a 21700 (Molicel P42A 21700 Battery from Fogstar), then the GRUS boots up fairly quickly, the Lost Vape logo flashes up for a moment before the main operation screen. Turning it off again and you have a smiley face graphic and “See you again” message which is kind of pleasing.

The GRUS functionality is somewhat limited but very simple to operate. There’s a handy ‘Selection’ button which makes things easier (I labelled it ‘Menu/Confirm’), playing around with button presses and combinations feels intuitive enough to work it all out without the need for the manual.

The colour screen is bright enough for most use but a bit too dull for outdoors. The layout is really nice and very sharp which is ideal for older eyes like mine. 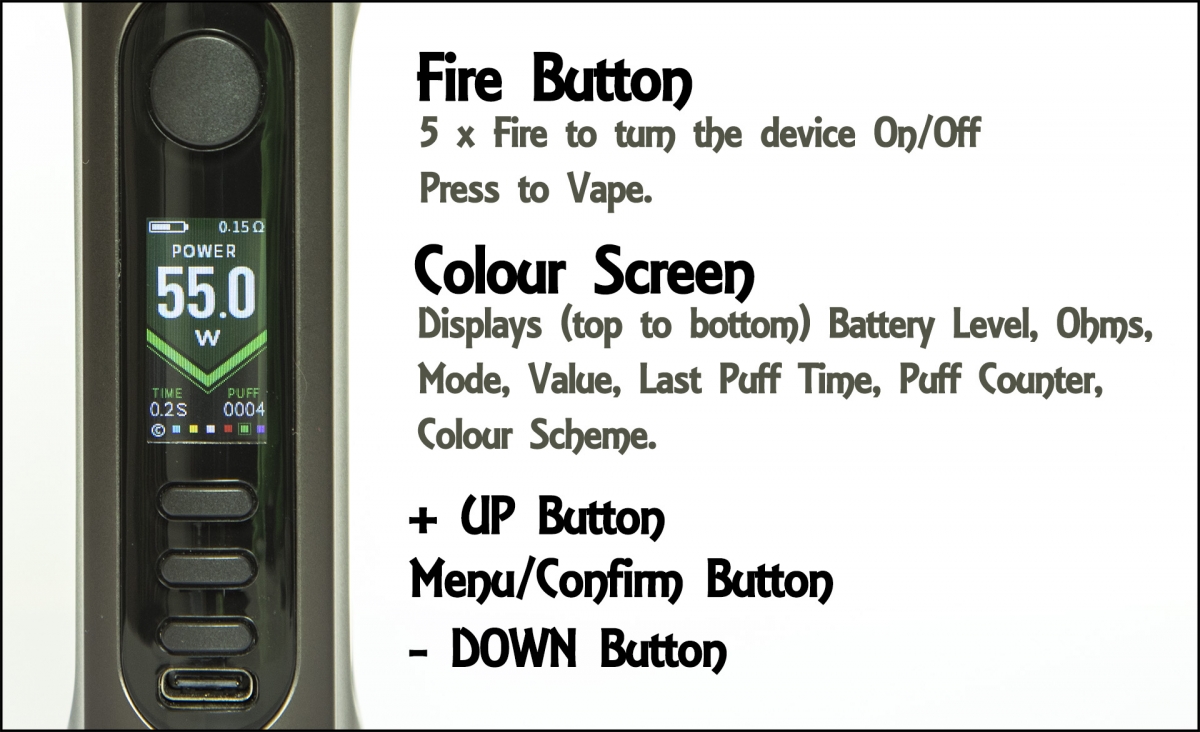 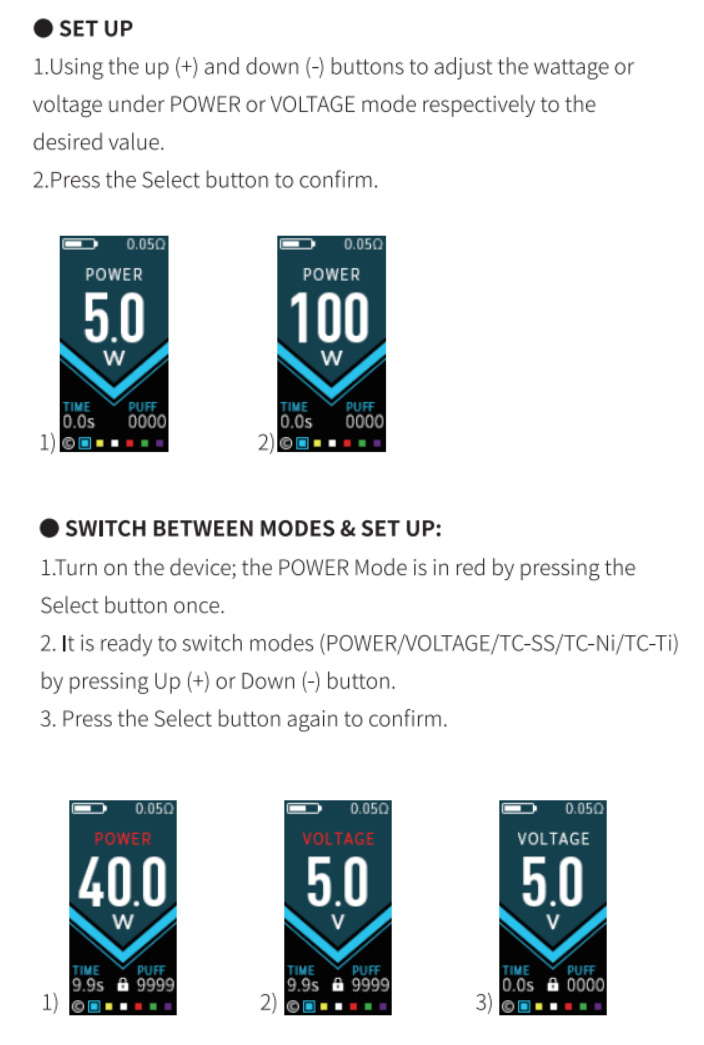 You can change the colour theme by pressing and holding the ‘Confirm’ button which goes to the next colour shown, repeat this until you find a theme to your liking.

Though it works, I find the options lacking in the most basic way. Unless I am being a total drongo, I could not find a way of changing wattage in TC Mode, either by playing around with button presses or resorting to the manual. There is no mention of adjustable wattage in TC mode so I can only assume there is no option.

Perhaps this will appear in a firmware update? But it has to go down as a con for me, also there are no TCR or Ohms locking features. 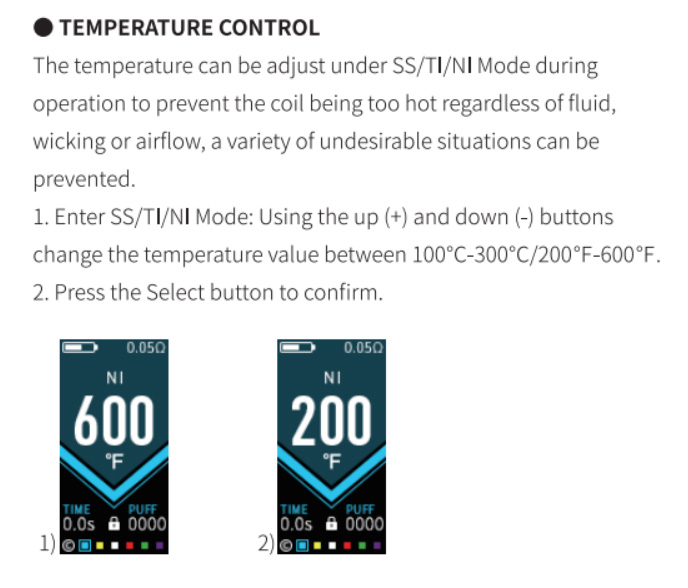 That aside, I did test TC mode as is. It does work to a degree, but without fine tuning it, I found it a bit too cool for my liking, but the main benefit of TC mode is you shouldn’t get any dry hits and I can confirm it performs that task perfectly.

As I’ve already mentioned, the GRUS has quite limited functionality, there’s no preheat, smart wattage, or TC tuning which makes the GRUS pretty basic all in all, but it is a vast improvement on the Gemini Pod/Mod which is VW only. For most users that simply vape in wattage only, then the GRUS will suit you fine. For stock coil mesh tanks, it hits perfectly and fires fast, but for DIY round wire coils, the lack of a preheat is a pain as you need to do a primer draw especially on lower Ohms.

But as it happens, I found the perfect partnership with the GeekVape Zeus X Mesh RTA, it suited the mod perfectly and, being a mesh strip tank, there is no need for preheating so it hits pretty much instantly and straight up to the power. For me, I mostly use mesh in my RTAs these days so the GRUS’s shortcomings aren’t an issue, but it might be a deal-breaker for others.

I have tried a few other tanks on it, the huge 30mm 510 connector pretty much dictates which tanks look good on it. I found 22mm tanks looked plain wrong, 24mm I would say is a minimum and 25-26mm start to look superb. I don’t own a 30mm tank so I cannot say how this would look but here’s a photo of a few: 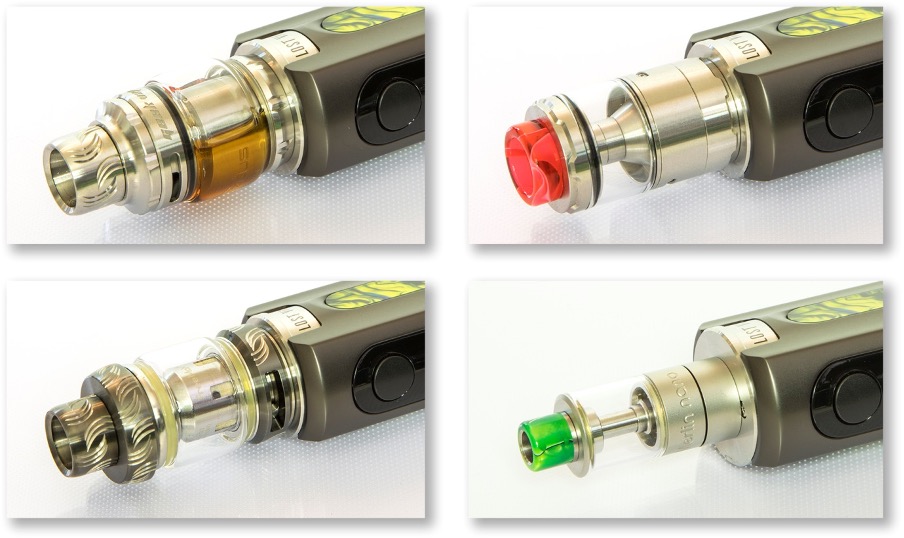 Despite any shortcomings, I really do like the GRUS. As a basic function single 21700 cell mod, it really has a lot of appeal, the styling and construction really feel high end and some of the options really look classy. It also feels great in your hand. This particular colour choice wouldn’t have been my first choice but having held and used the GRUS, damn I want a silver/wood effect one!

If you really need a full featured mod then the GRUS might not fit your needs. I normally would demand more TC control and preheats, but I have plenty of tanks where I don’t need the extra functions so I’m more than happy with it.

For the price I have seen these listed for (under $50 - I couldn’t find an actual RRP as yet), I would feel I had a bargain and it sits nicely onto my ‘posh’ mod shelf.

The Quest arm of Lost Vape are really evolving into an exciting brand recently, it’s nice to see them branching out into proper mods instead of just pods and AIOs. I can’t wait to see what they come up with next.

Lost Vape Quest have brought out one of my favourite single cell mods and 21700 fits into a nice gap in the market. Sure there’s not much competition BUT there’s little not to like with the GRUS. More to the point, there’s a lot to love about it. If you like the look of it and can live with the limited functions, then I think you are going to love getting your hands on one. 2020 hasn’t finished with us yet, but this is a rare highlight that’s going into my best of 2020 shortlist. 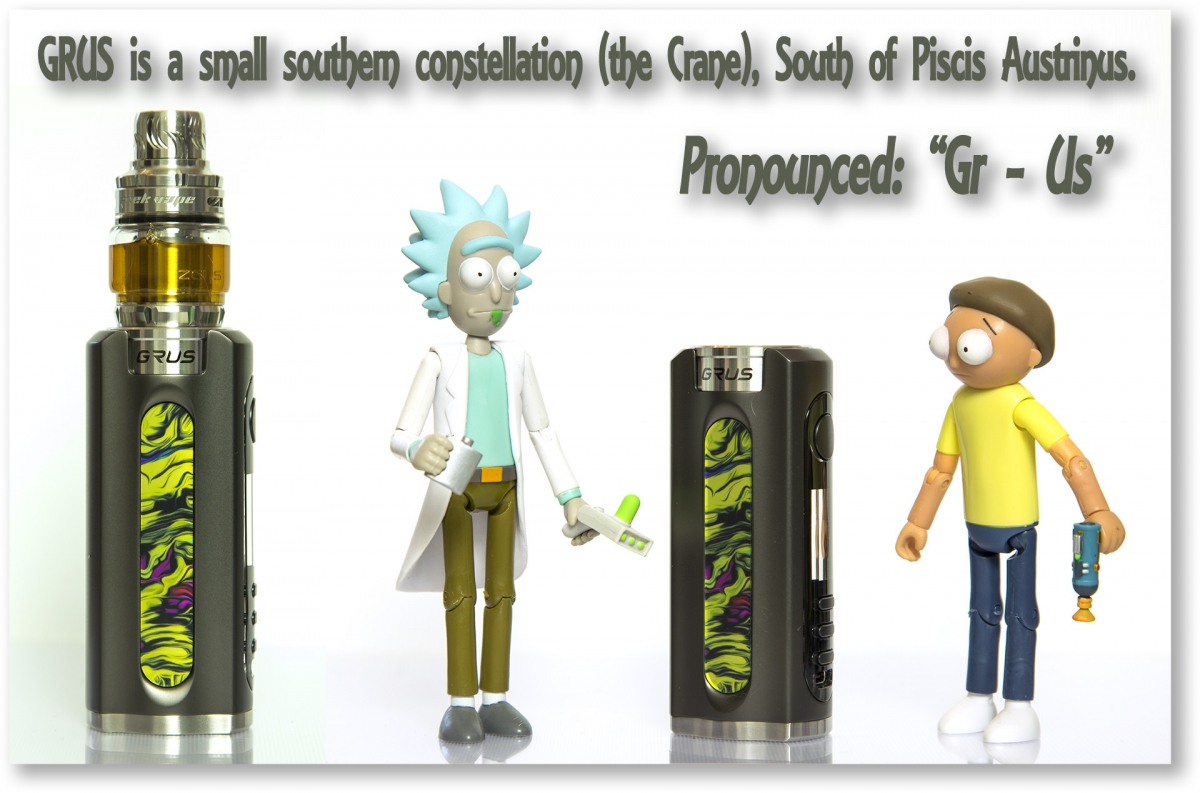