Geekvape's latest offering in the Aegis range is the Max, a single 21700 cell boasting 100W output, TC, bypass and VPC (power curve). It is encased in the familiar bomb-proof body that Geekvape have made their trademark. Is this the answer to a lot of vapers requests for single cell, 21700 mod that give both power and long run times? Thanks to Heavengifts for supplying the Max kit for review. So let’s take a look.

In the box and specs

Heavengifts sent a sample kit in for review so this differs slightly from the retail TPD version as it is supplied with a 5ml Geekvape Zeus sub ohm tank and no manual. UK retail will be 2ml TPD compliant and contain manuals (for those that read them). The packaging is robust as usual and removing the lid (no finger cut outs grr) you are presented with the Max mod. Taking out the tray, we find the Zeus tank and a black box containing the usual spares, O rings, screws, spare glass, 18650 adaptor, coil tool and battery door tool, 0.4ohm KA1 mesh coil. A 0.2ohm KA1 mesh coil is already installed.

The kit I received was the grey pearl version with a brown leather padded insert, silver coloured trim and black rubberised body. Five variants are available.

The battery compartment is a threaded cap style with a lift up catch to aid fitting/removing, and the battery is inserted positive end up as marked at the top of the tube. Screwing the cap on/off was quite stiff but a tool is supplied to give a little more leverage. Once tightened, there is no battery rattle with either a 21700 or 18650 with adaptor. As with all screw cap battery tubes, do not over tighten as it may cause damage to the battery positive contact. Once the cap is flush with the base you know it is tight enough, any further and damage may be caused. With its rubberized finish this mod, like all the Aegis range, boasts IP67 waterproofing and is shockproof. Anybody familiar with this range will know they are built like tanks without weighing like one. It has the usual Aegis button layout with the large fire button above the screen and + and - buttons below. The USB port is protected by a rubber cover that fits nice and snug. The 510 plate is around 30mm which makes the Zeus tank look a little out of place in my opinion. All in all, a nice mod in the hand, comfortable, nonslip and not too heavy for its size.

Having fitted a 21700 Molicell P42A, filled the tank with juice, it's now time to have a vape. Five clicks on the fire button starts the mod. A quick boot up and we’re ready to go. Screwing on the tank and you have a “New Coil?” screen, use + or – button to confirm your selection. This option pops up even if you fit the same tank/coil and resistance is the same. It is a shame it cannot remember what resistance was previously set and if it is the same, ignore the message but it's no biggie really. The screen is the usual layout found on all the Aegis range that use the AS-100 chipset, clear and uncluttered. From the top you can see the mode, power or temp, battery indicator, coil, amp, volt and puff counter. Three clicks on the fire button allows you to scroll through the various options, bypass, VPC (power curve) TC-TCR/Ti/SS/Ni and back to power. Although no TC coils were included, I did pop an rta with an SS316 coil to test tc and found it perfectly usable, nice and stable with no feeling of pulsing from power activation. It was a bit off compared to a DNA device but certainly not as bad as some boards I have tried. Bypass is a nice option to have, especially if you like to replicate a mech style vape. Power curves are something I rarely use unless it’s a coil set up with slow ramp up time or with mesh coils. I have no need so didn’t use it. To lock resistance, a must for TC, use three clicks to go to options, one click on fire button highlights the coil and pressing - locks the oHms. Scroll down to Puff and you can reset the counter. Pressing + and - together locks the screen,  but it doesn’t lock the fire button to prevent accidental firing. A USB B socket is located on the side under a robust silicon/rubber waterproof cover for charging and firmware upgrades. 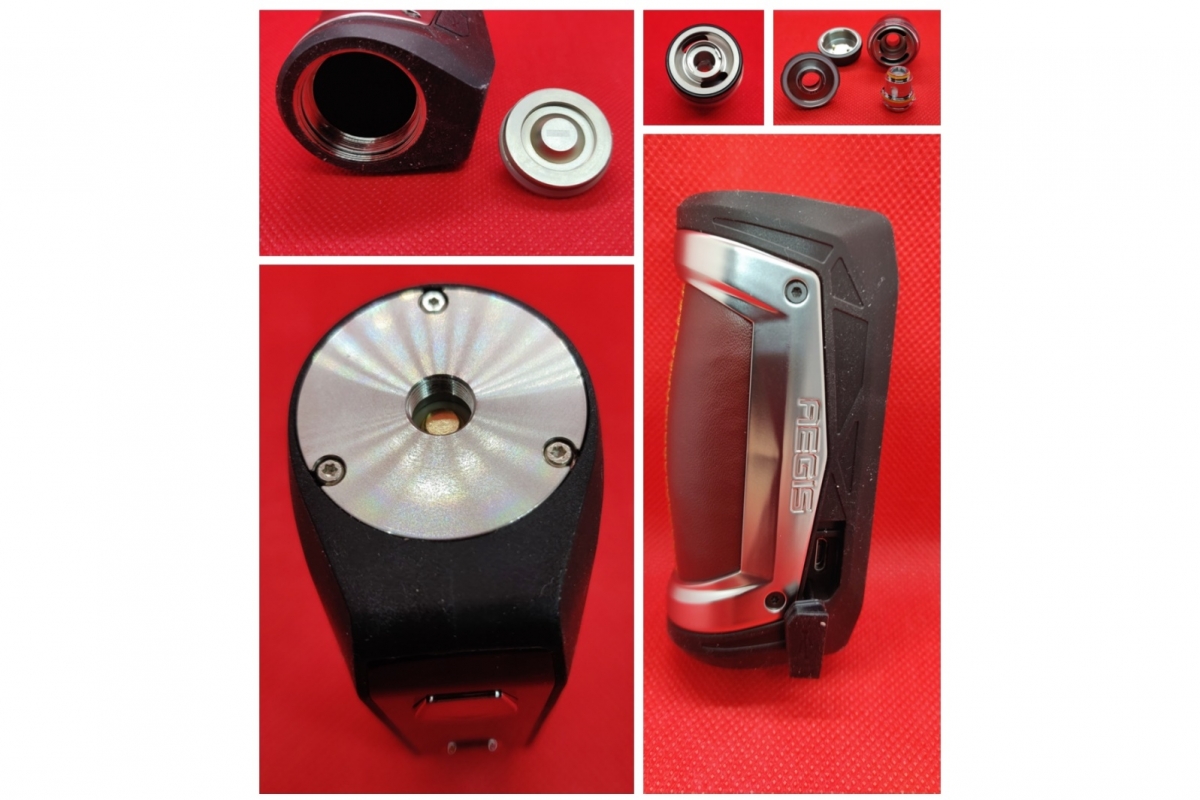 After priming the coil and leaving it for five minutes to absorb the juice, it’s time to try the Zeus tank. The Zeus tank has been around a while and is pretty well received by those who have used it. A sub ohm, stock coil tank with top fill and top airflow makes leaks almost impossible. This is the first time I’ve used it and I was very pleased with its flavour and cloud chucking properties. The Z2 0.2Ω coil is rated at 70-80W and the Z1 0.4Ω to 60-70W. After starting at 50W, the Z2 sweet spot for me was at 70W and the Z1 60W, both at the bottom of the range. Above that, even with airflow wide open, it was getting too warm for my preferences but I’m sure plenty of people will like a hot vape. Wicking never seemed to struggle when pushing up the watts so that was a good sign. Both coils continued to produce plenty of flavour after 5/6 days, so longevity doesn’t seem to be problem unless using overly sweet, coil gunking juices, so I would expect at least 10-14 days usage.  This is likely to reduce if you are really pushing the power, but I based this on my vaping preferences for a warm vape. Battery life was, as expected with a 21700 cell, surprisingly good. Batteries used were Molicell P42A 30A, 4200mAh.

The mod is quick firing with consistent power output and long life with 21700 cells. Using 18650 batteries though and there’s quite a drop off in runtime, especially running tanks at 60-70W. Life was equal to the Aegis squonk I reviewed, so around 3-4hrs on the smaller cell but a respectable 6-7hrs on the 21700. Using a tank with higher oHm coils will obviously give more time so you should expect a day from the Max. 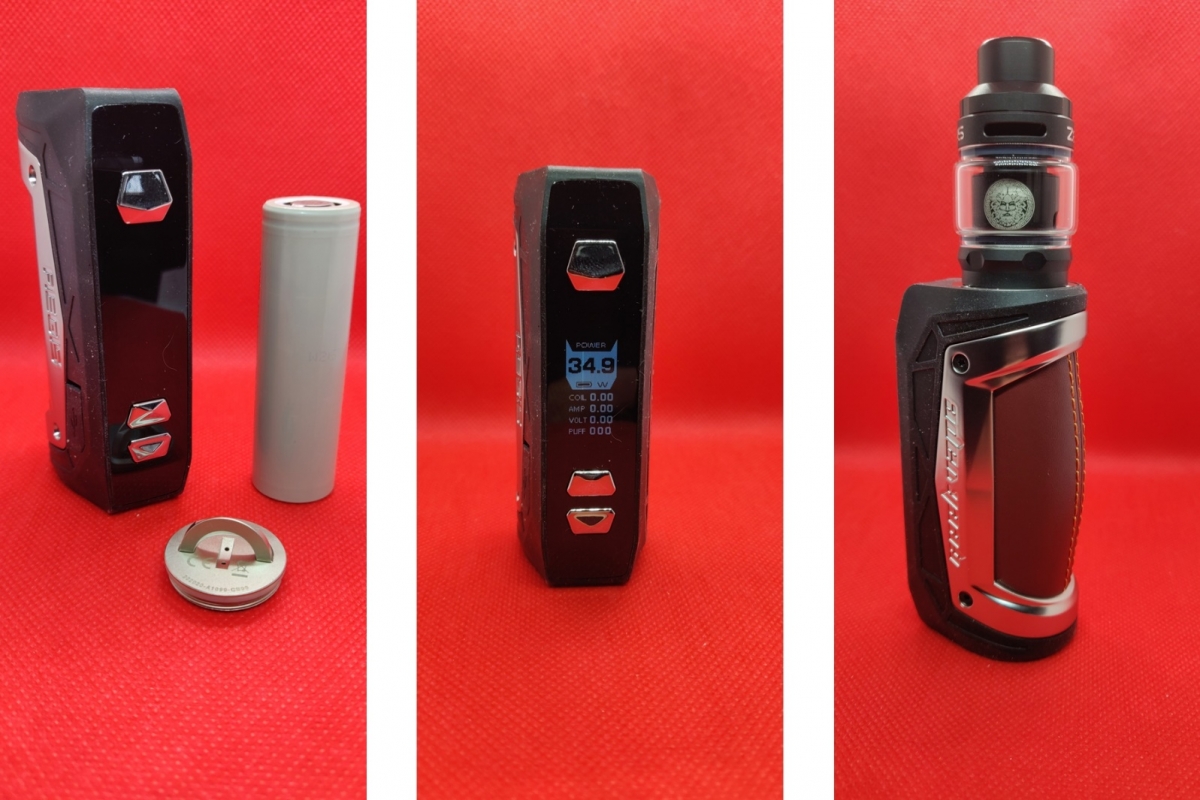 This is another solid mod from Aegis, well built, waterproof, shockproof and the perfect work device. It will take all the knocks and drops and just keeps running. No issues in use and it is comfortable in the hand, although not the most pocket friendly due to the bulk. The outer covering has remained scuff free and the screen front did not get scratched. It’s a formula that has worked for Geekvape over the Aegis range and there’s no reason to change. One thing I would like though would be an updated Ui as this one has been around for a long time, going back to at least the G Box squonker, but it works ok. The Zeus sub ohm tank was a good vape, smooth threading and easy top fill system. If stock coil quality is consistent then this is a good compliment to the kit. Being narrower than the mod, there’s a degree of protection to the bubble glass should it be knocked over. Personally, I think a wider attie would have suited it better but then it’s a trade off over battery consumption. This is a kit well worth considering if you are looking for a work carry mod that can survive the rigours of being dropped and bounced about, and the supplied tank fits well.

Many thanks to Heavengifts for supplying this product for review.