Established in 2013, Aspire will be synonymous with older vapers for the introduction of the Nautilus & Mini & the BVC coils. These remain a favourite to this day. With continued innovation they have remained a firm favourite among vapers, new & old.

The Aspire Prestige range is a new venture bringing some top designer names together with Aspire to create new mods & atomisers. Along with NoName & Taifun, Aspire have collaborated with Italian mod designer Sunbox to produce the Mixx SbS. Utilising a side by side design, this gives a small factor with great functionality.

This review is for the new Frosted Mixx range, released to compliment the existing sand blasted Aluminium/Stainless Steel original. Many thanks to UK ASPIRE VENDOR for supplying this for review.

The Prestige branding starts with the packaging. The outer sleeve, giving mod style/colour & Nicotine warning on the front & contents list on the rear, belies what is inside. The Prestige logo on the box lid gives a statement of quality. Inside is the logoed wallet containing the manual & some Prestige stickers. Beneath this is a cardboard inlay logoed with “Designed by Sunbox” framing the mod set into a foam tray. Also in the foam tray is the 18350 battery tube & spares bag with 2 screws for converting between 18650 & 18350 batteries. 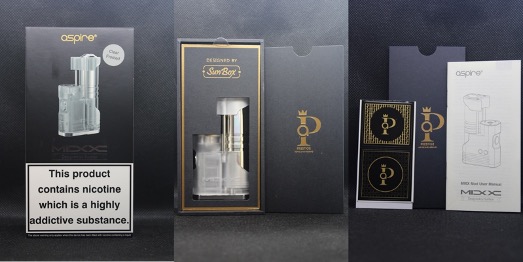 The Frosted Mixx range comes in three colours, clear, smoke and yellow. The Aluminium CNC parts have been replaced with acrylic to complement the SS battery tube, base 510 plate. A large fire button under the 510, and two navigation buttons complete the look. The base houses the 0.91” OLED screen, which is recessed to prevent damage. There is no usb port so on board charging or firmware updates are not possible. The battery tube has a screw on cap that once the thread has caught is nice and smooth. The cap has a raised centre bar for easier gripping, and there are two vent slots, strange given the battery is inserted positive down. The cap is marked "-" to indicate negative with a large "+" sticker in the base of the tube for positive. Two Allen screws hold the top collar in place, and once removed, the battery tube unscrews to facilitate swapping between 18350/18650 batteries. It’s a simple process to swap between cells, remove the two screws and collar, unscrew the battery tube, screw on the other tube to the base, and refit the collar using the correct length screws. An Allen key isn’t supplied, but a Wera P2 driver works fine. In short mode, remember to use coils suitable for the reduced amperage of an 18350.

The menu system is straight forward with only three modes available - VW, VV and Bypass. Five clicks of the fire button locks all the buttons. A two second press on the fire button in this mode turns the system off, and five clicks will turn it back on. Three clicks turns the screen on/off, fire button still functions. Plus and Minus together will flip the screen. To access the modes, press Fire and "+" together to chose VW, VV or Bypass. The screen layout is very DNA60 looking, with a battery symbol on the left, Ohm, Volt and Amps list, and Wattage on the right. Watts is swapped with Volts in VV mode, and a B symbol shows in Bypass.

The first RTA I tried out was a Steam crave Supreme Lite, at 23mm a good fit, and I fitted a single SS coil at around 0.5Ohm. I did try fitting an Aromamiser, also 23mm, but the AFC ring fouled on the body of the mod due to the SbS format and it being proud of the body, so be aware of this when contemplating tanks to use. In use, I found thumb firing better as there was less chance to inadvertently cover the airflow hole, but I soon adjusted to finger firing. The 0.5Ohm build gave me a good balance between battery life and quality of vape. Firing was pretty instant and consistent until the low battery warning. In the hand, it’s comfortable once you adapt to the firing button position, and battery life has been decent with this set up. The tank I used was a little tall, some 2” higher than the battery tube so I pulled out a Cog with a 0.8Ohm MTL Clapton coil. This was far more suited, given the clear Acrylic tank and SS base, and it only being the height of the drip tip taller than the tube. This kept it nice and compact and was more comfortable in use. At 20W, battery life was good for most of the day. 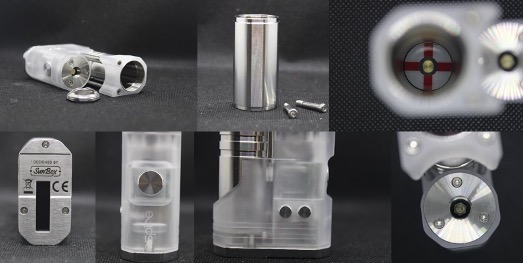 I’ve actually enjoyed using this, despite it being a polar opposite to my usual set up of big tank/mod. It’s easy in the hand, has a clear display, and I like the easily accessible buttons. Build quality is of a high standard with smooth threads and finish. It took a couple of hours to get used to tipping the mod to see the screen but, as with most mods, once it was set, I could just forget about it. No battery or button rattle, although the battery cap will sound like a baby's rattle with no cell fitted. On the one I received, the negative button felt a little distant, as if the switchboard behind was slightly off, but this didn’t affect the usability. Other than that, the buttons were responsive. Going through the mode options wasn’t always smooth as sometimes it wouldn’t recognise a double button press, but it did get better the more I tried. In 18650 mode, this is a great mod for a higher Ohm/MTL user given there’s a 60W max output. The main thing to be aware of is the size limit of 24mm and access to airflow controls. As with all SbS mods, it’s possible to end up with the airflow facing the body of the mod, but using attie spacers (plastic washers) it’s easy enough to ensure unhindered airflow. Aspire have built a reputation over the years for good quality products and this, coupled with the collaboration with Sunbox, is a good addition to their catalogue. For somebody who uses 22-24mm tanks and wants a stealthy, light weight set up but doesn’t want a pod system, this is a recommendation. 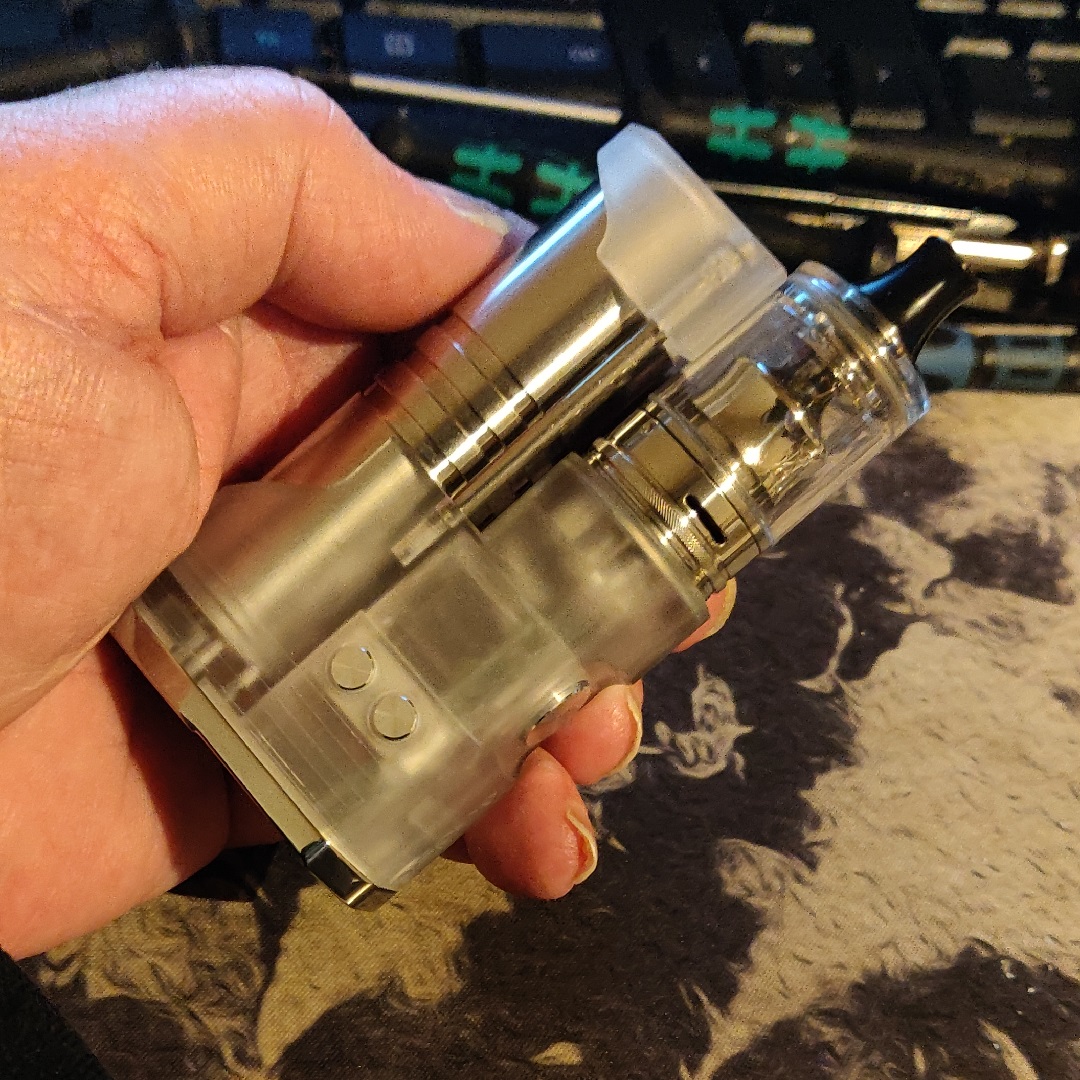