Heaven Gifts have sent over the latest kit from Kiz0ku, who were previously known for their atty stands and drip tips but have now started to branch out into other areas. The Kiz0ku Kirin mtl pod kit comprises a semi mechanical tube mod and a pod based tank system. The Kirin name is derived from the Chinese Kirin totem which is a symbol for fortune and luck. 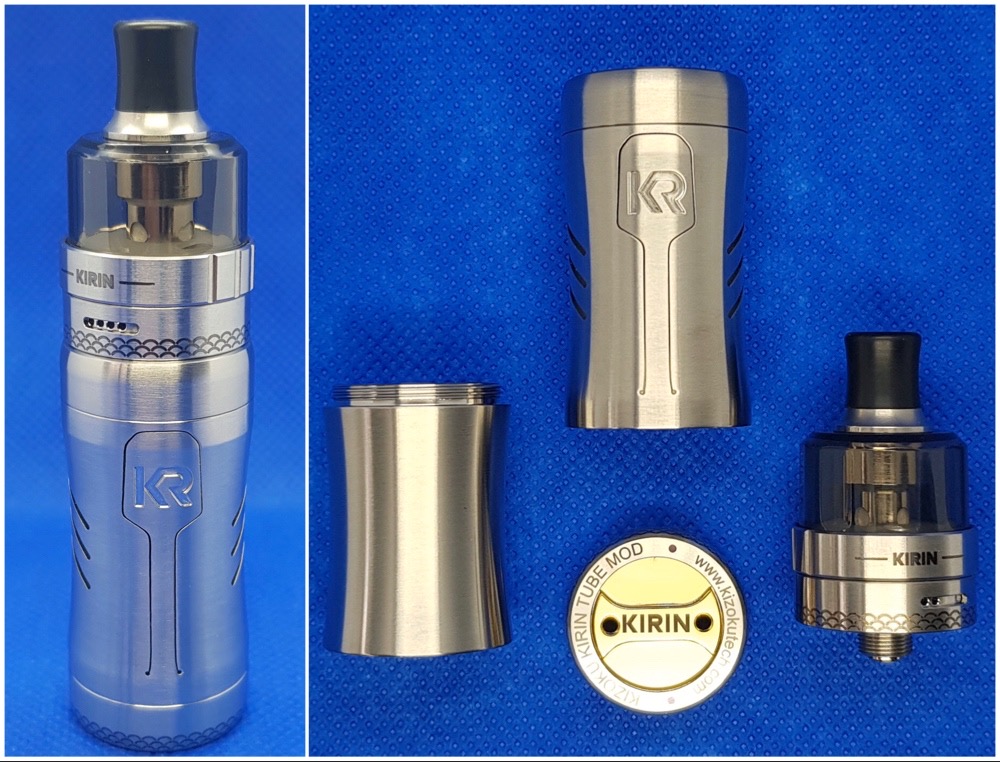 First off, the presentation is superb with the kit clearly displayed in its 18350 battery mode with the tank on top. Sliding the red sleeve on the right hand side away reveals a list of technical specifications, and opening the doors you finally reach the kit along with a handy quick start guide on the inside of the right door panel. 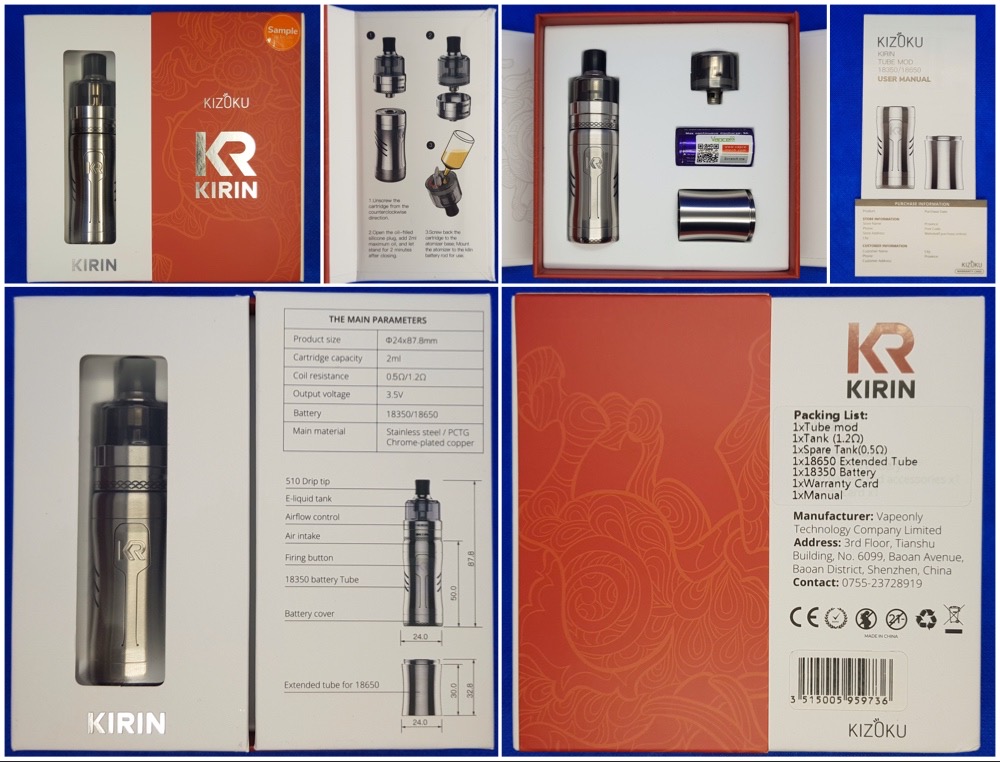 Kiz0ku have also included a modern 18350 battery with the kit which is nice to see as it’s not a particularly common cell. It's a Vapcell 18350 rated at 1100mAh and 9amps max discharge. This puts it in line with a lot of pod kits and is far better than the older 18350s we used to get, which were generally around the 700mAh and 7amps range.

When you remove the Kirin kit, it comes assembled in its 18350 mode with the Kirin pod/tank on top. This is dinky and easily palmable, even in my tiny hands. Putting the tank aside for one second, it’s time to take a more detailed look at the Kirin mech mod. 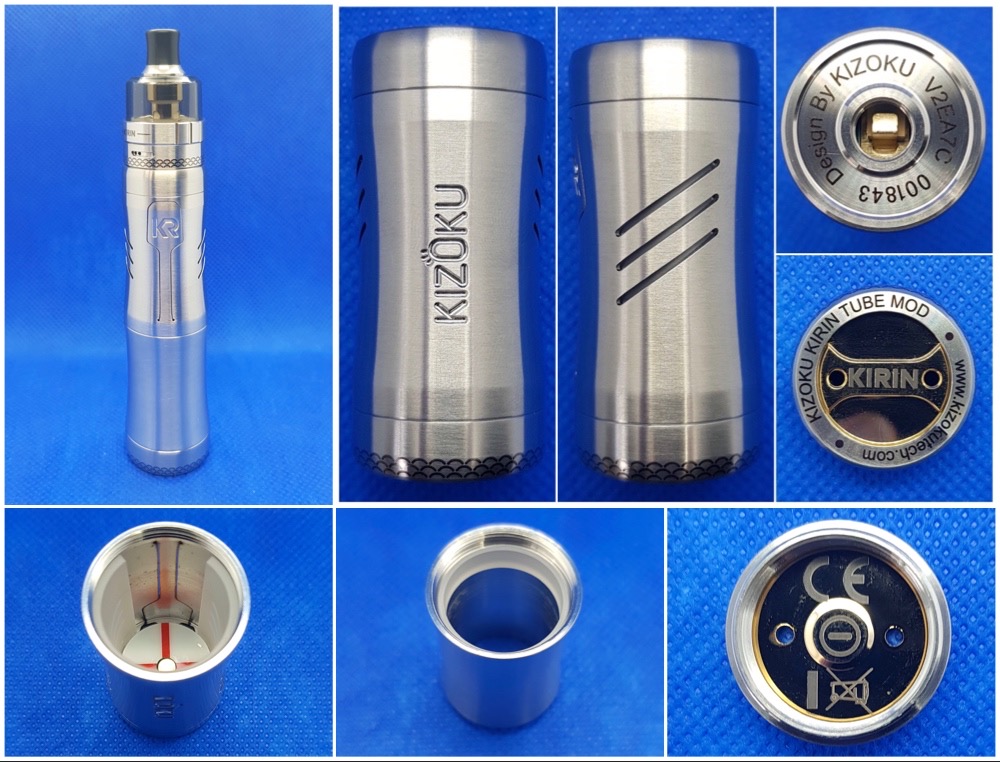 On the front of the device, the fire button is integrated into the body of the tube with a delicate cutout structure and a bold “KR” (Kirin) logo. This has a very precise click to it as the kirin is a semi mechanical tube mod with a mosfet chip so it’s the button on the mosfet that you can hear and feel. Turning the tube around, you find three bold diagonal cutouts on each side, and on the back is a deeply embossed Kiz0ku logo. It’s certainly a bold look and is visually very striking.

Looking down from the top at the 510 platform, you can see the top of the mosfet and it’s encouraging to see that a small rubber bung has been placed under the positive connector to reduce the chance of this collapsing or breaking as we have seen with similar designs in the past. There’s no indication in the manual or on the website if there is any sort of conformal coating on the chip/board, so I’d be cautious if you use any atty that could potentially leak into the 510, like a kayfun lite 2019, especially as the top section appears to be press fit over the tube denying access to the chip (or at least I wasn’t able to open it). The manual also advises not to dissemble the device yourself but to contact VapeOnly customer service, so it would appear that Kiz0ku are either part of VapeOnly or are supplying the technical support for them.

Removing the battery cap and looking down into the tube reveals a large positive sticker on the underside of the mosfet board and a large internal insulation sleeve which doubles up as a light guide. Whilst the external finish of the tube is fantastic, the inside reveals a slightly rougher, less polished appearance. This shouldn’t cause any problems though thanks to that internal sleeve, although it is a little disappointing to see. The 18650 extension also has a smaller insulator on the bottom portion and again shows a less finished look inside the tube.

The inside of the battery cap is marked with a negative symbol and the inner (gold?) plated section is adjustable for any battery rattle. You can also back this off slightly when not in use to effectively disconnect the battery.

When you insert a battery, the device requires five clicks to turn it on and you will see the light guide behind the bold diagonal slits flash several times to show the device is now active. Five clicks will also shut it back off. Every time you press the button, these slits will also light up to show approximate battery charge and any error codes, however there’s little detail on this so I’ve had to deduce some of the following with my own tests:

There do appear to be some other built in safety features, I deduced that there’s reverse battery protection, for example, from my own testing but again details are lacking in the documentation.

Both the manual and website indicate that this is supposed to be a constant output device locked at 3.5 volts output, but this wasn’t what I was experiencing in use as it initially felt overpowered with a fresh battery and using the mtl pod in particular. Using an old coilmaster volt/ohm reader, it looks like it would be more accurate to view this as a bypass mod as it puts out the full 4.2 volts at the 510 with a fully charged battery and drops with use which is how I obtained the figures outlined above. It also appears to put out 0.1 volts for approximately 50 seconds after turning the mod on or each button press before going into a sleep mode (zero volts). Of course, being a mech, there’s no built in charging, but I always recommend using an external charger in any case.

Next let’s turn our attention onto the Kirin pod system. At first sight this appears to be a standard tank system but it actually breaks down into just three parts, the airflow base, a refillable disposable pod and a drip tip.

Two pods are included in the kit, a 1.2Ω round wire pod for mouth to lung vaping and a 0.5Ω mesh coil for restricted direct lung vape. The pods have an integrated 510 catch cup and a nice drip tip is included in the kit which I found very comfortable. You can, of course, use your own 510 drip tips as well.

Although the pods have the Kirin logo and “CE” and “don’t vape in a bin” symbols, there are no marking to tell you which resistance it is. They are easily identified by removing the drip tip and looking down into the coil though. These pods are filled from the bottom via a large silicone bung which is easy to remove. The fill hole could do to be a little larger though as I did encounter a little bit of air locking when using eliquid bottles with thicker tips.

Once full, the pod simply screws into the 510 compatible airflow base. This has two airflow settings and is adjusted by turning the upper ring with the Kirin logo on it. This is easier to do if the tank is screwed onto a mod. The first setting is achieved by turning the ring all the way to the right which reveals five small (1mm?) holes, and this can be turned all the way down to one hole if you want that super tight mtl experience. This airflow option is one sided. Twist the airflow all the way to the left and you get two decent sized cyclops airflows for the direct lung pod. It’s still fairly restricted but more than enough for the included 0.5Ω coil. 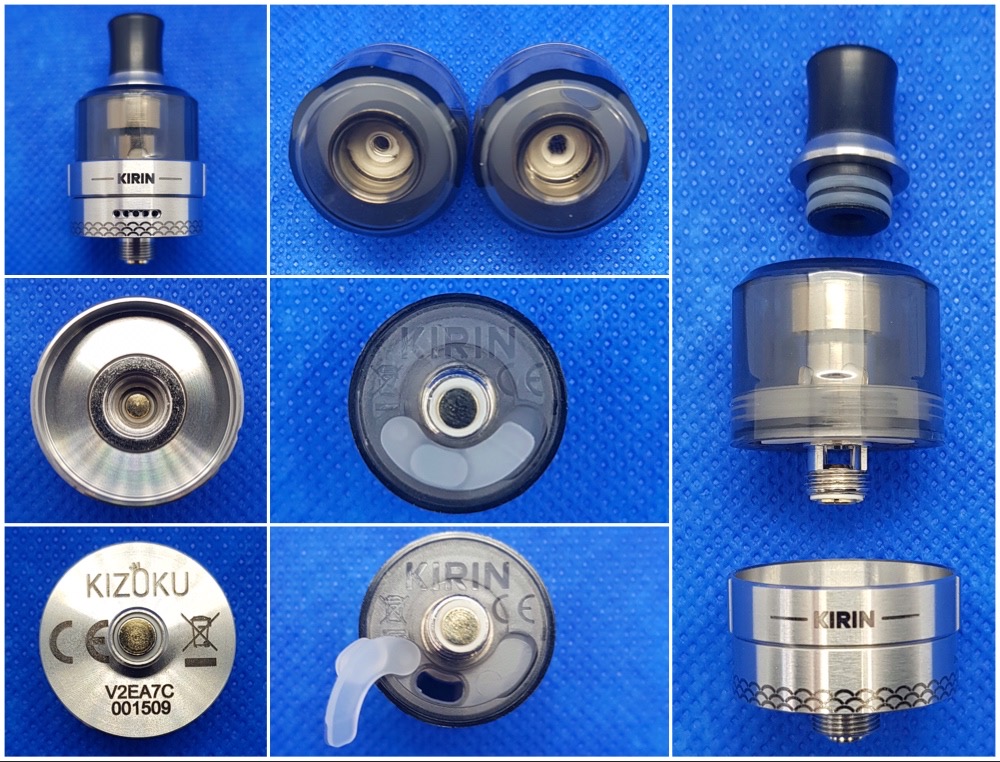 I started off with the 1.2Ω mtl pod. This produced pretty good flavour but definitely struggled with a fully charged battery and performed much better once the voltage had dropped a little. It also didn’t seem to keep up with chain vaping or when eliquid reaches the top of the wicking ports, in fact it felt like it was vapour locking at times. Although you can close the airflow right down to a fairly tight mtl, I prefer a loose mtl so found it better at three or four holes on the mtl setting. The pod is rated for 8 to 12 watts, and testing it on a regulated device it read at 1.3Ω and performed best below 10.5W (3.7V) tasting slightly burnt above 11 watts which would explain why it struggled with a fully charged battery. It also gave me intermittent short errors if the pod was screwed too tightly into the airflow base.

Swapping over to the 0.5Ω mesh pod, I deduced that at 4.2volts this would draw about 8.4 amps and 35.3 watts, which I felt was perhaps a little too close to the 9amp rating on the supplied Vapcell 18350. In fact Battery Mooch recommends staying below 7 to 9 amps or 27 watts with this cell so I swapped to 18650 mode with the tube extension piece and would suggest you do the same. I found the airflow restriction was great with the dual direct lung cyclops closed off ever so slightly which again gave great flavour and a nice warm vape. Again, it felt like the pod was struggling with a fully charged battery and chain vaping similar to the mtl pod, although this was nowhere near as pronounced and seemed a better matchup for the mod.

The Kirin mech, tanks and disposable pods are also available separately with the pods coming in packs of three. If you buy the mech on it’s own, I don’t think you get the 18350 battery included but it is available in three different colours whereas the full kit only appears to be available in the steel finish. 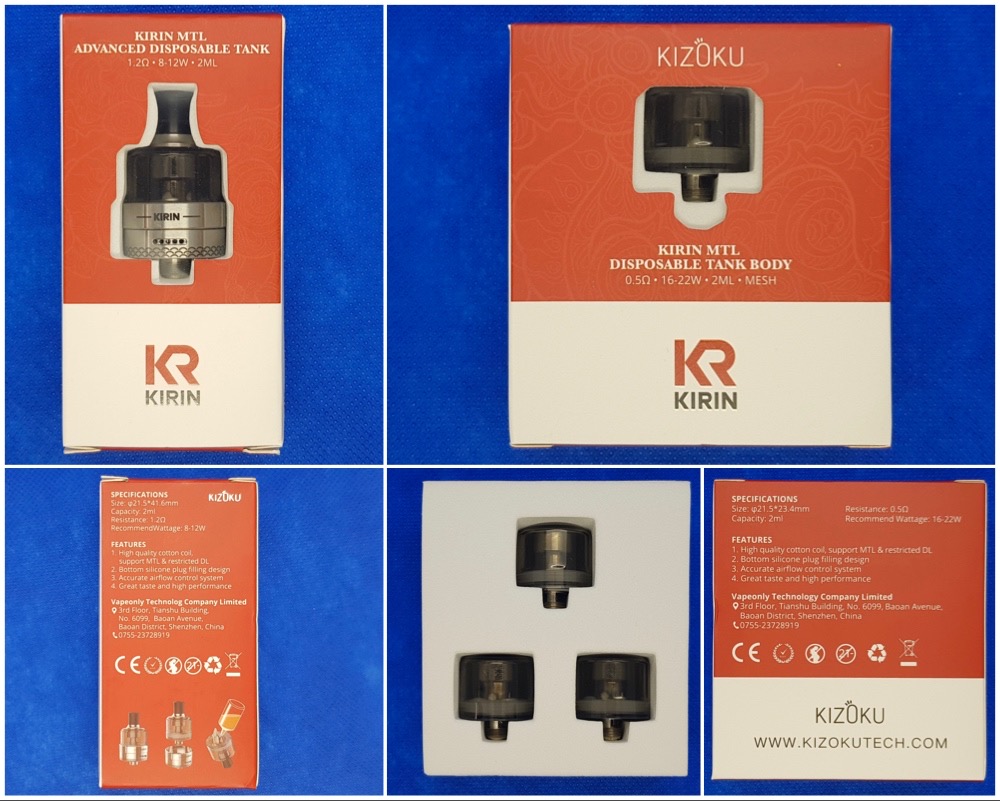 I’ve thoroughly enjoyed using the Kiz0ku Kirin mtl pod kit over the past week. I definitely feel that the Kirin mech is the strongest part of the kit and will continue to use that, and it’s definitely a great kit if you want a small 18350 mech with some basic protections onboard matched up with a small mtl atomizer. I’m a little less convinced by the pods though, and would suggest these are better used with a regulated mod where you can control the wattage, especially with the 1.2Ω mtl coil. 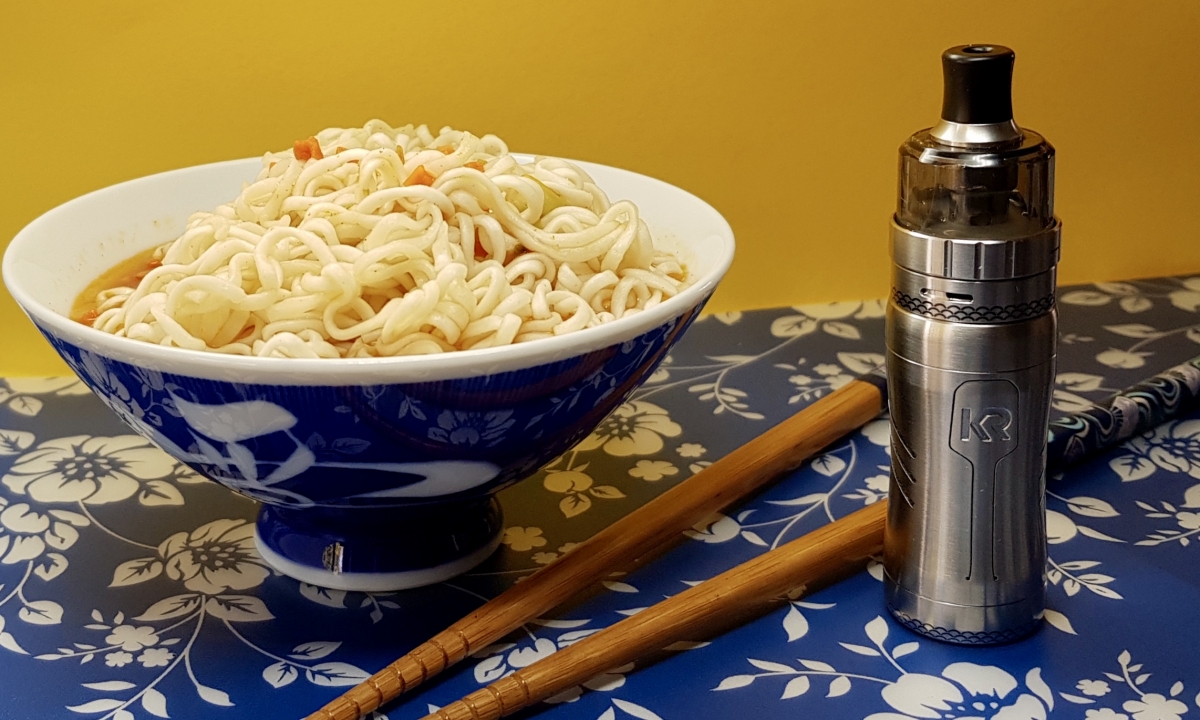