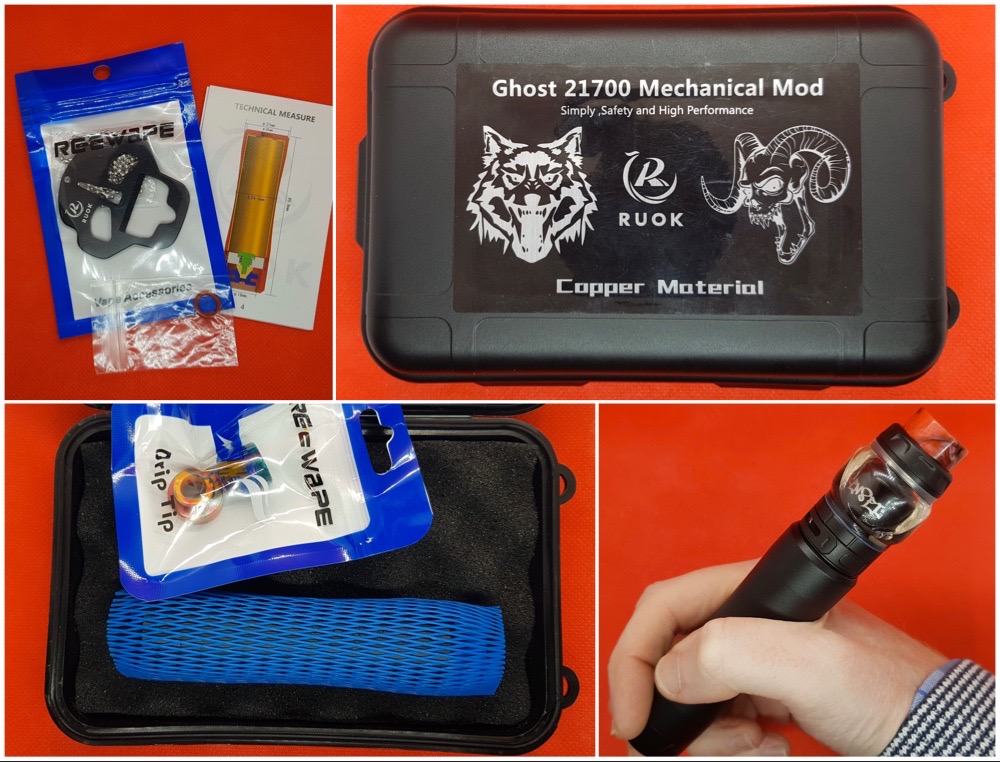 When I got in touch with Reewape recently to ask about their superb RUOK Rba for Nord compatible pod systems they asked if I’d like to take a look at the second item from their new RUOK range, the RUOK Ghost 21700 Mech mod. I’ll confess that I’m not a massive mech user but I decided to give this a try as well. Read on and find out how I got on.

The RUOK Ghost comes in a plastic box, unclipping the sides and opening this up reveals the mech is safely cushioned by foam pads and is additionally protected by a net sleeve, plus Reewape have also thrown in two really nice resin drip tips as well, one 510 and one 810. Underneath the bottom foam pad, you’ll also find one of their shortfill tools, a spare o-ring for the switch and a brief user guide.

The guide, although short, is very well written with clear instructions on using atomizers with a protruding pin, battery safety, basic maintenance and a clear breakdown of the parts, which is nice to see. 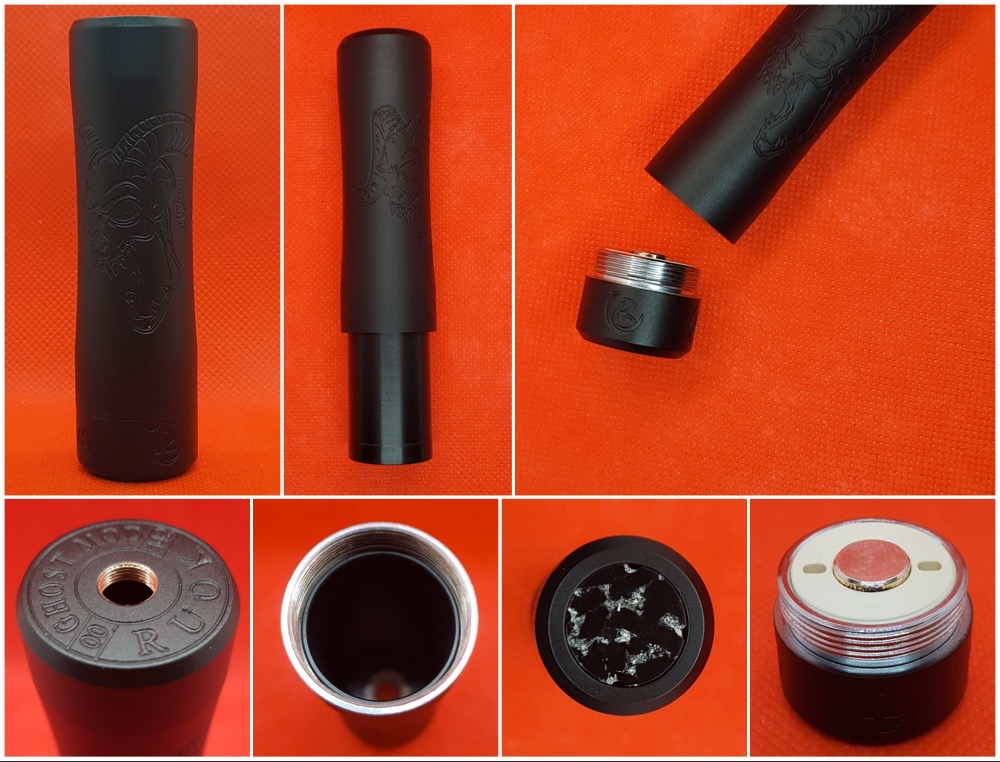 The RUOK Ghost comes in copper, white brass or black with the option to either have a plain tube, a wolf or a ghost design on the mod. The supplied version is in black which has a copper core with the ghost design on the side. Removing the switch from the bottom reveals an 18650 battery adapter hidden inside, a plus for me. One of the big selling points is the internal plastic sleeve that runs all the way down to the hybrid 510 connection to give you an extra layer of safety, but of course you should still always check your battery and its wrap for any damage before use, as with any mech, and build within the safe amp limits of your battery.

The switch itself has the RUOK logo on the side, silver plated contacts and a nice resin button on the underside. This is a “constant contact” switch meaning that it is always in contact with your battery and that the on/off contact is made within the switch itself. This should reduce arcing damage to your battery. 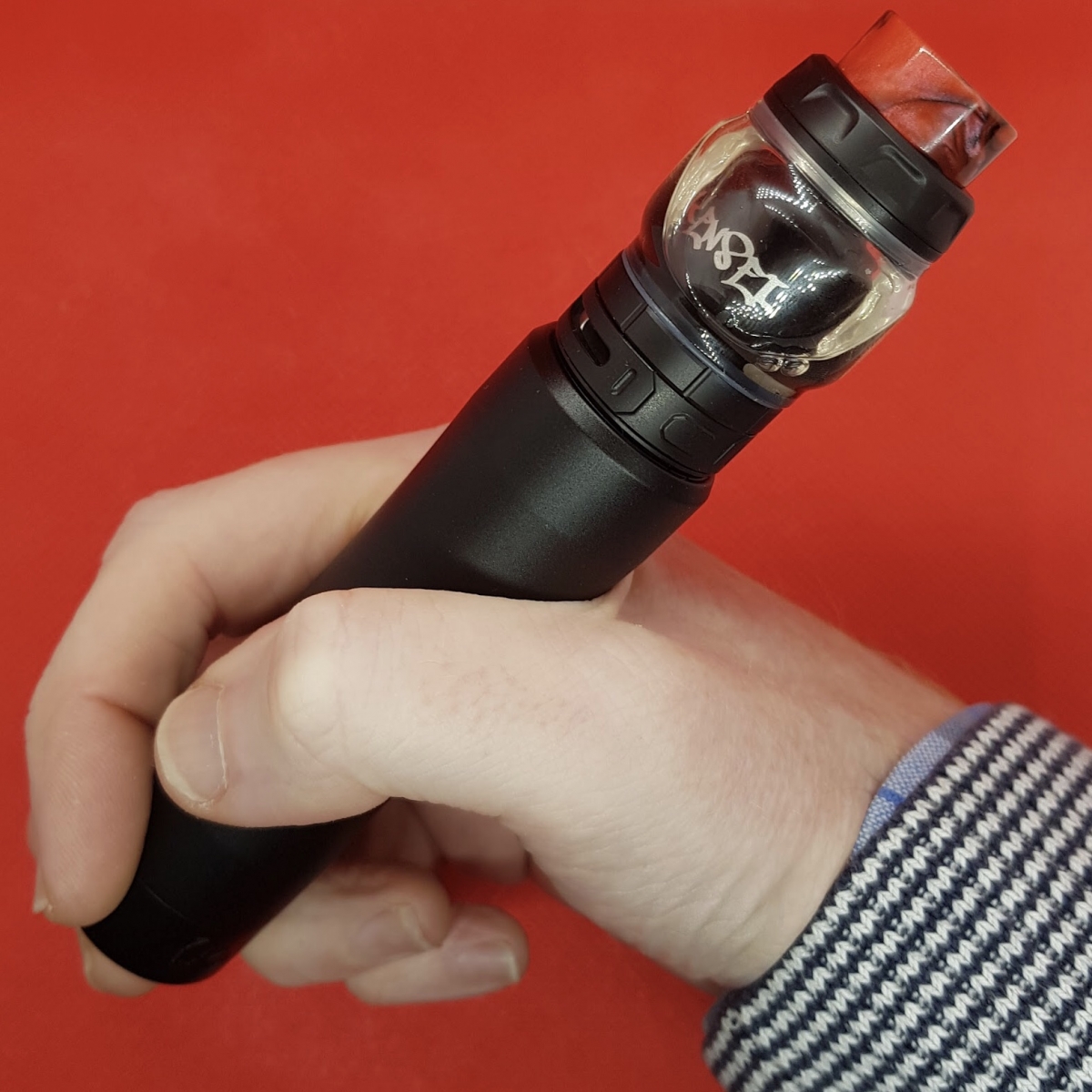 After a quick look through my collection of atomizers, I decided to team the Ghost with a black Kensai rta as that had a nicely protruding 510 pin with extra peek insulation isolating the positive pin from the (negative) threads, which is ideal for use on a hybrid 510 mech. I first of all coiled and wicked this up on a regulated mod before installing it on the Ghost to make sure everything was working correctly and there were no shorts etc., I want to be as safe as possible after all. Next I installed a 21700 battery positive up towards the 510 pin before finally screwing the switch back into place. This proved to be a great match up for that murdered out look, and the slight curve on the battery tube proved comfortable in the hand giving an adequate amount of grip.

The switch had a fairly firm throw to it requiring a fair bit of pressure to activate, but everything worked perfectly so off I went to test how it performed. Over the next two nights testing, the switch seemed to be getting more and more difficult to press until it reached the point where it started to become distinctly painful on my fingers! I decided to call it a day with a plan to disassemble the switch the following evening, I needed to photograph it anyway. 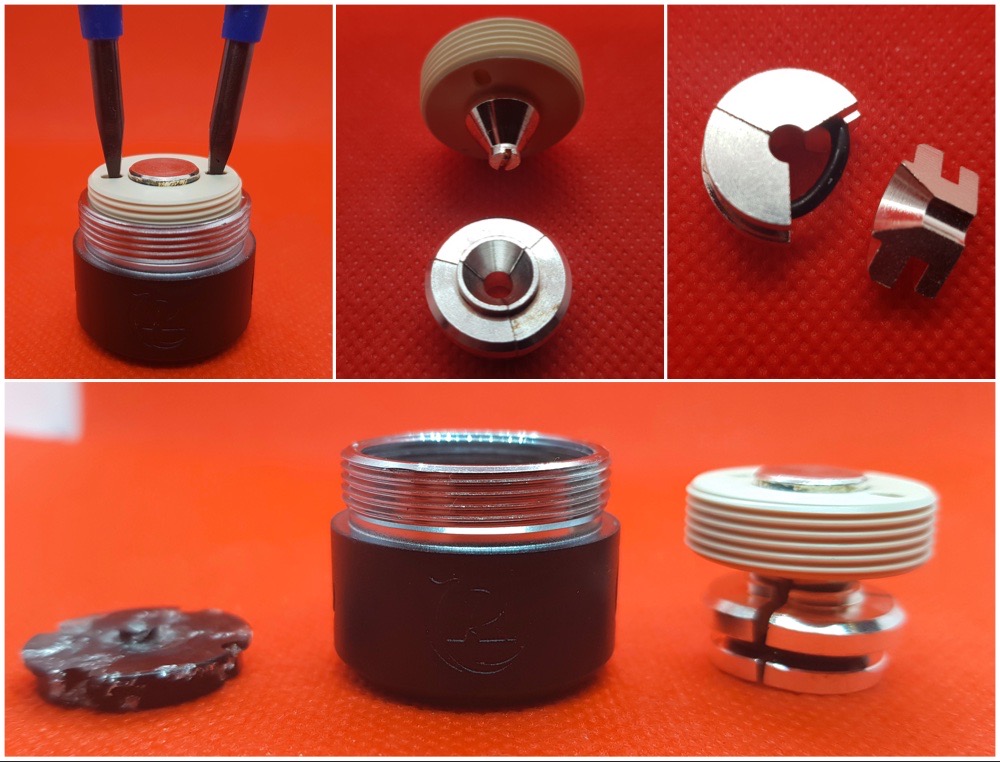 Using ceramic tweezers the top of the switch, which is constructed from peek, it was easy to remove. I believe you can also use this technique to adjust the height of the switch to eliminate any potential battery rattle. The holes also double up as battery venting holes. Under this is the triple clutch system held together with an o-ring, and finally at the bottom is a resin button. 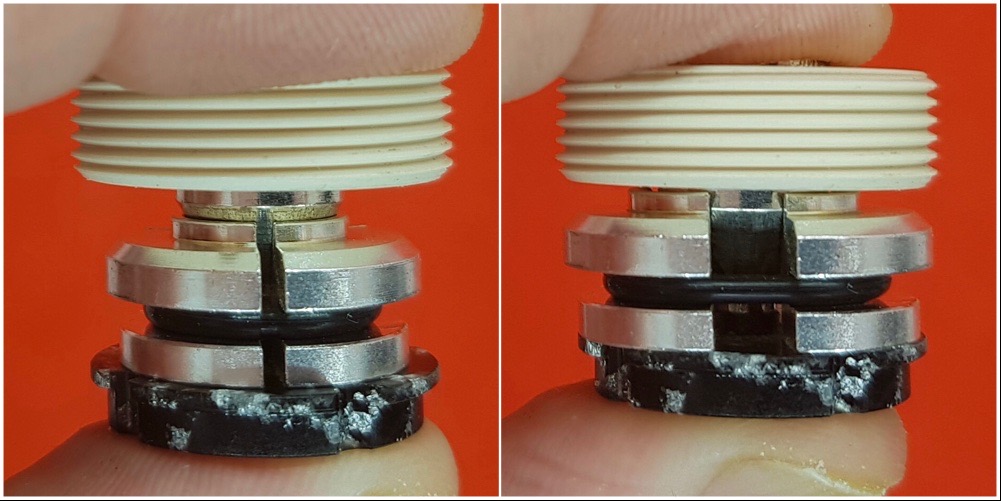 Having found nothing obviously awry, I reassembled the switch and screwed it back onto the battery tube. The throw on the switch was instantly much easier and it has behaved impeccably ever since. I suspect that something was possibly a little misaligned out of the box but at least I now know the switch is easy to disassemble for cleaning later on or if it becomes difficult to press again.

During my week testing, I’ve had a lot of fun using the RUOK ghost mech. After my initial struggles with the switch it has performed brilliantly and if you’re a mech fan then this is definitely worth a look, it’s certainly made me a mech convert.

Many thanks to Reewape for sending the RUOK Ghost Mech mod out for review. 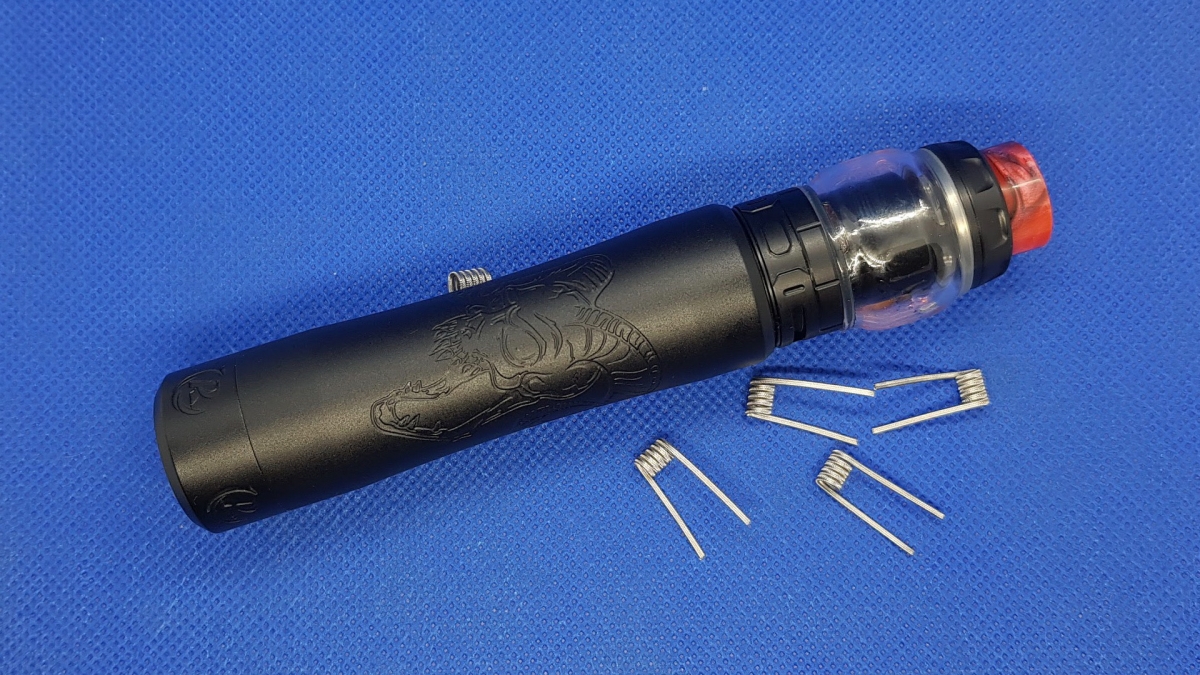