Hellvape asked me to take a look at the Trishul V2 semi-mech mod. First off I have a confession to make, I’m not a big fan of mech mods! However this looked rather interesting as not only does it use 21700 batteries, it can be used as a semi-mechanical or full mechanical mod, a mech mod with training wheels as it were. 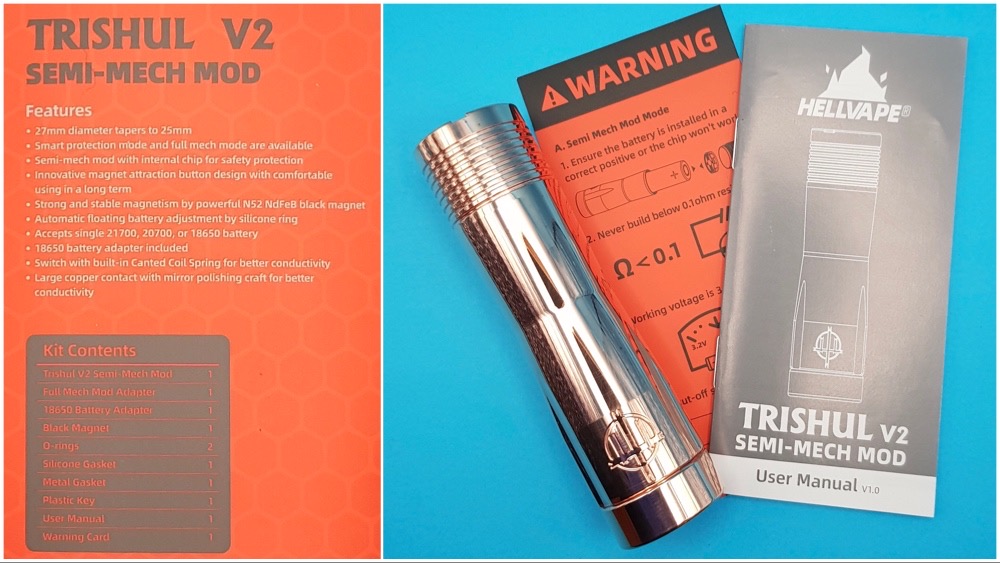 Upon opening the box you’ll be greeted by the Trishul V2 semi-mech mod, a small user manual and a warning card explaining some of the workings of the mod in both semi-mech and mech modes. 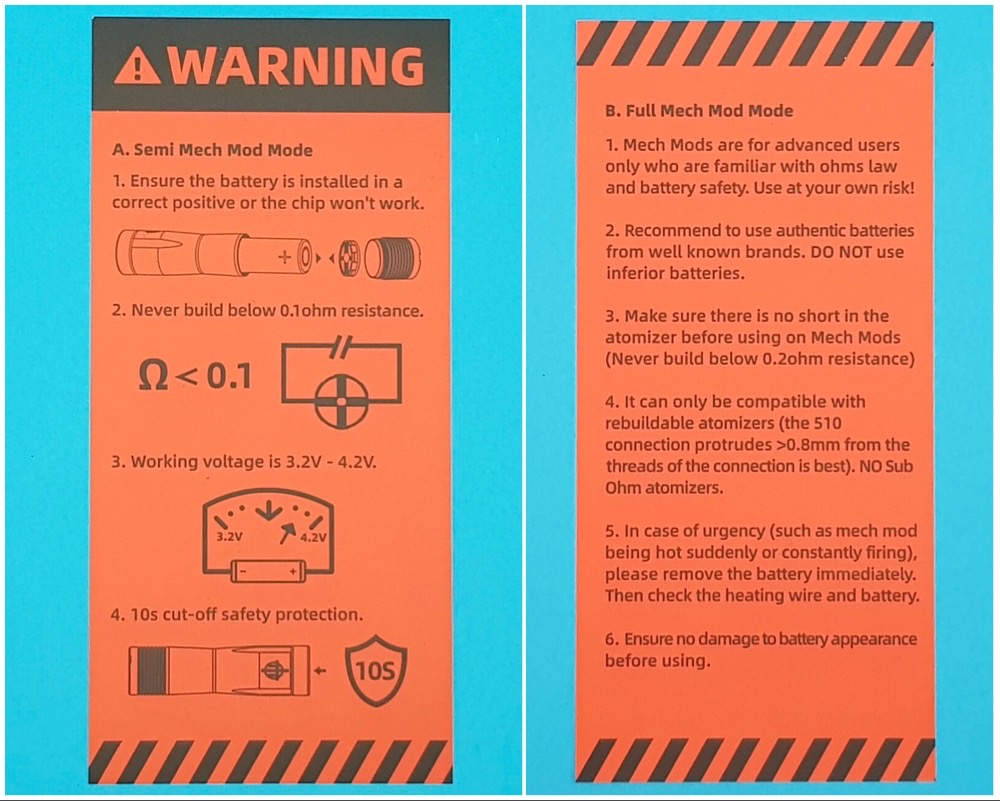 So where are all the extra bits and pieces… well they're tucked away inside the Trishul V2 semi-mech mod itself which splits into three parts, the top hardware, the battery tube and the bottom switch. 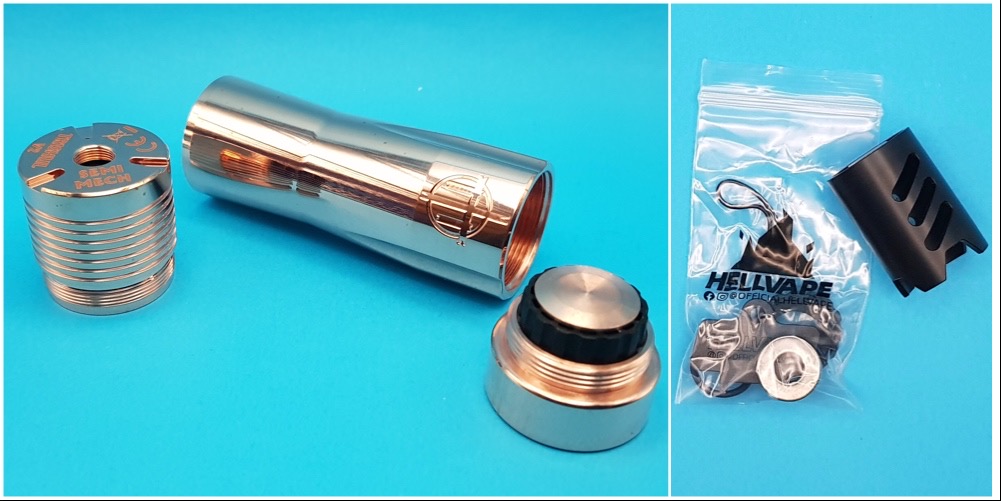 Inside the battery tube there’s an 18650 battery adapter along with a spare parts bag which has extra magnets, gaskets, o-rings, and a plastic tool to help you disassemble the switch. 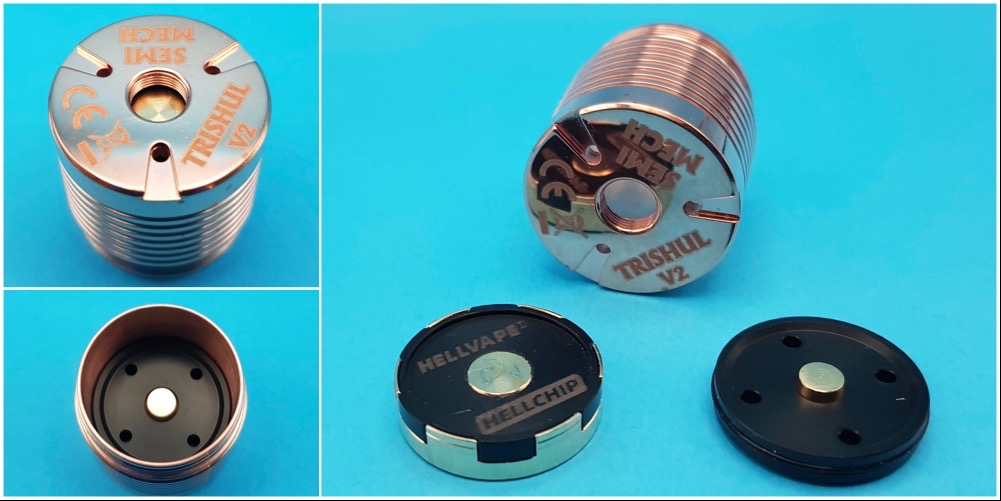 Inside the top housing you’ll find both the Hellchip semi-mechanical adapter and the adapter to convert the Trishul V2 semi-mech mod into a full mech mod. These are very tightly fitted into the housing, particularly the hellchip safety adapter, and you’ll need to push them out from the 510 side. Whilst the full mech adapter goes back in quite easily, the Hellchip requires a fair bit of force to get it back in place and I would worry about the longevity of this if you were inserting and removing this frequently. As you can see from the photo below, I’ve already managed to gouge a couple of chunks out of it! This should be fitted with the Hellchip logo at the top towards the 510 and the plus symbol facing down into the battery tube. 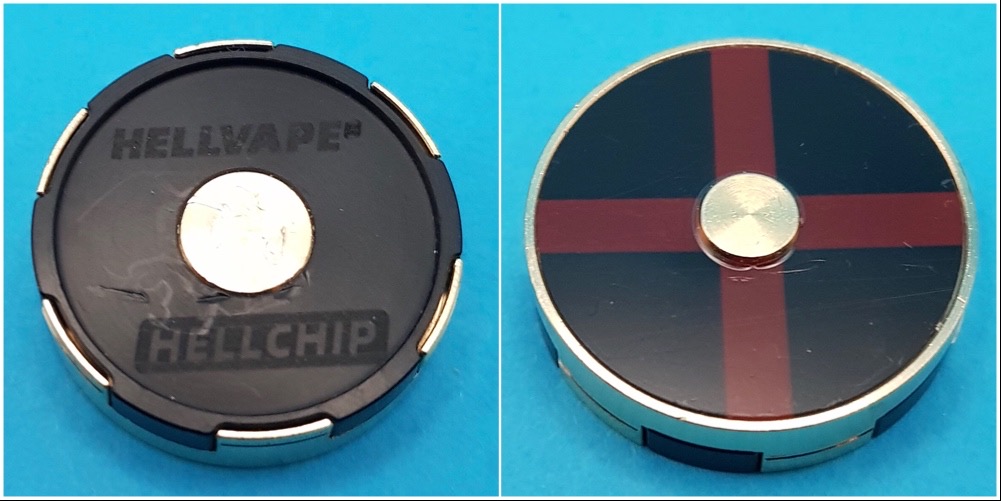 This provides your mech mod training wheels with basic protections:

I can tell you that the low voltage protection works and cuts you off when your battery reaches about 3.3 volts. Reverse battery protection isn’t mentioned and, for obvious reasons, I decided not to check for this myself! 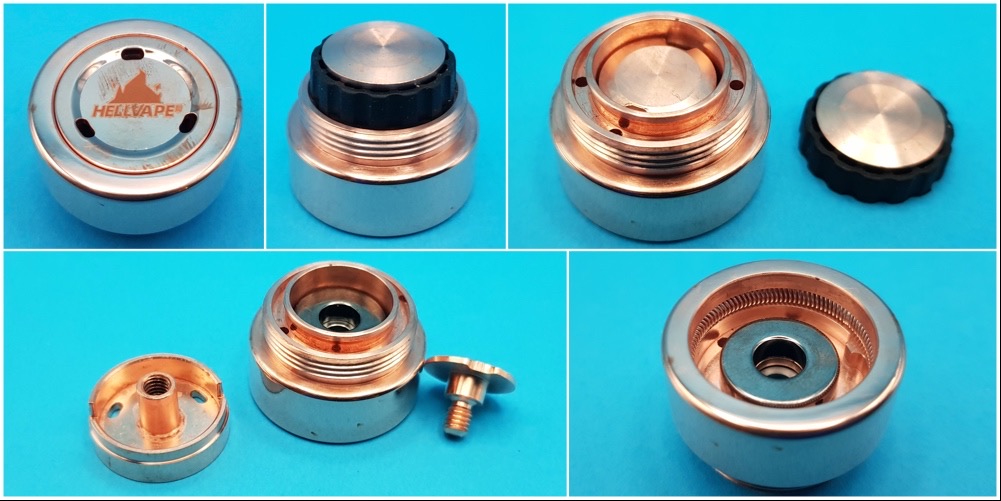 The switch itself is the same as the one used on the earlier Trishul V2 Mech mod and uses a constant contact system along with a rather unique magnet system to eliminate arcing wear on your batteries along with an upper rubber section which automatically takes up any battery rattle.

This is easily disassembled for cleaning, and there’s a silver plated canted coil spring in the base around the button to make the contact between the button and housing more reliable. The magnets actually hold the switch open and you push them apart when you push the button, this is the opposite of what you would normally expect but it’s worked flawlessly for me.

One thing that does appear to be absent in this release is a plastic liner in the battery tube which would have provided an extra layer of safety but I’m guessing that would make the use of the Hellchip technically difficult to implement. 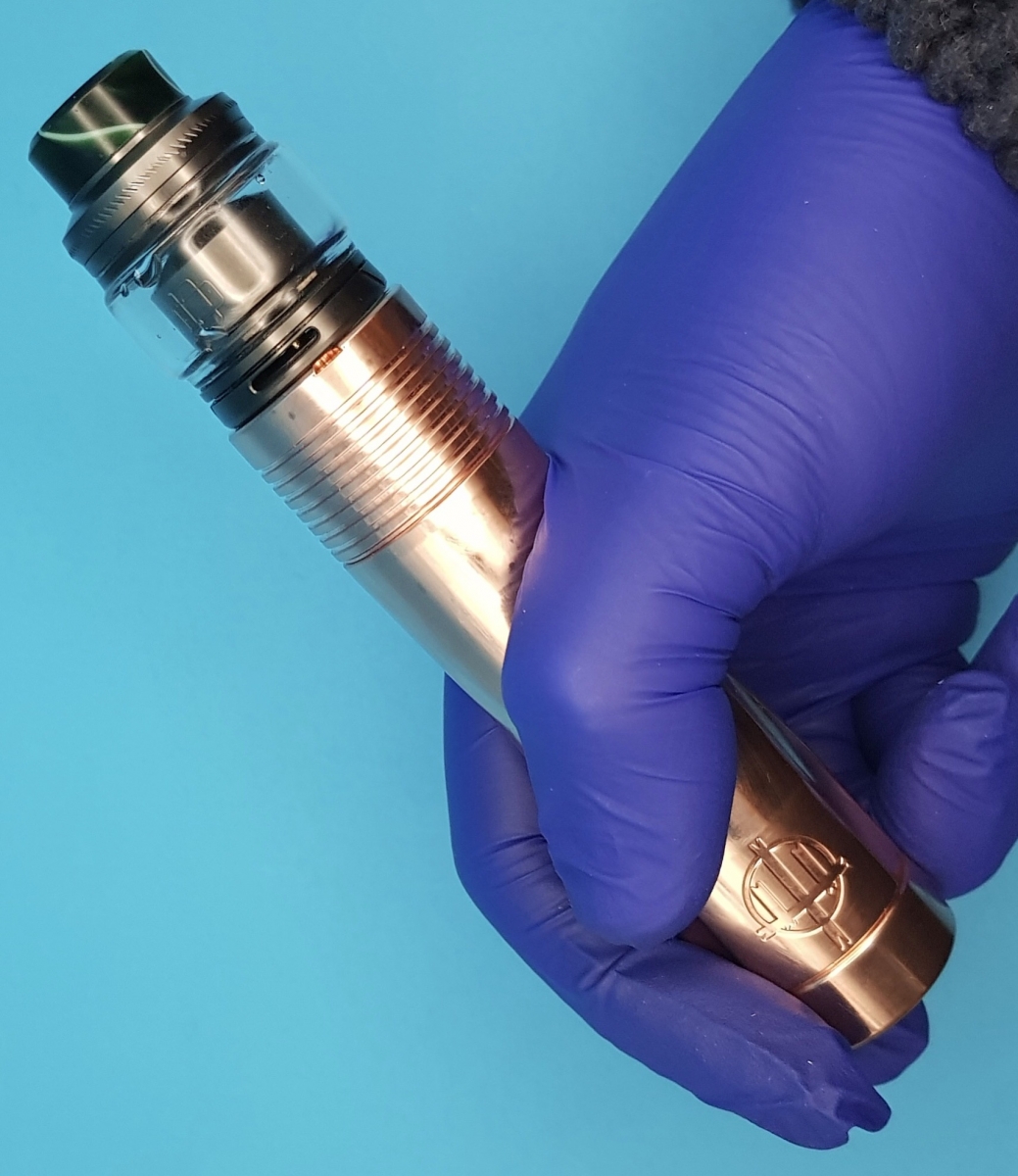 What’s it like in use? The 510 plate on the top can accommodate up to 25mm atomizers provided they’re suitable for use on a mech mod (no stock coil tanks here please!), and it bulges out to 27mm at the base with a nice taper in the middle which makes gripping the mod really comfortable. In the past, I’ve found it tricky to use a lot on mech mods as they tend to slip out of your hand when you press the button but that hasn’t been the case here, that waist in the middle with the fairly smooth button action have actually made this really easy to use.

If you’re wondering why the rubber glove, well I was trying to keep my fingerprints off the copper housing whilst I took photographs. It comes highly polished but, as anyone who’s ever used a copper mech before will attest, this will quickly tarnish and become dull so will require diligent cleaning to keep it looking its best. If this is something that bothers you, or you hate your hands smelling like old pennies, then I’d recommend going for the black version. This still has the same copper core but it’s been coated in black cerakote which will eliminate these problems (it’s also available in brass). You will of course still need to periodically need to clean the switch and threads for maximum conductivity.

I’ve actually enjoyed using this a lot although if I were to purchase it myself I’d probably go for the black coated version. Mech purists will likely prefer the copper version although I suspect they’d more likely go for the original Trishul V2 Mech mod with its pure hybrid 510 connection. Whilst the Hellchip does provide some basic safety features like low voltage and a 10 second auto cutoff, you will still need to use mech safe atomisers and build within your battery safety limits, but if you’re scared of mech mods this might be worth a look.

Many thanks to Hellvape for sending the Trishul V2 semi-mech mod out for review. 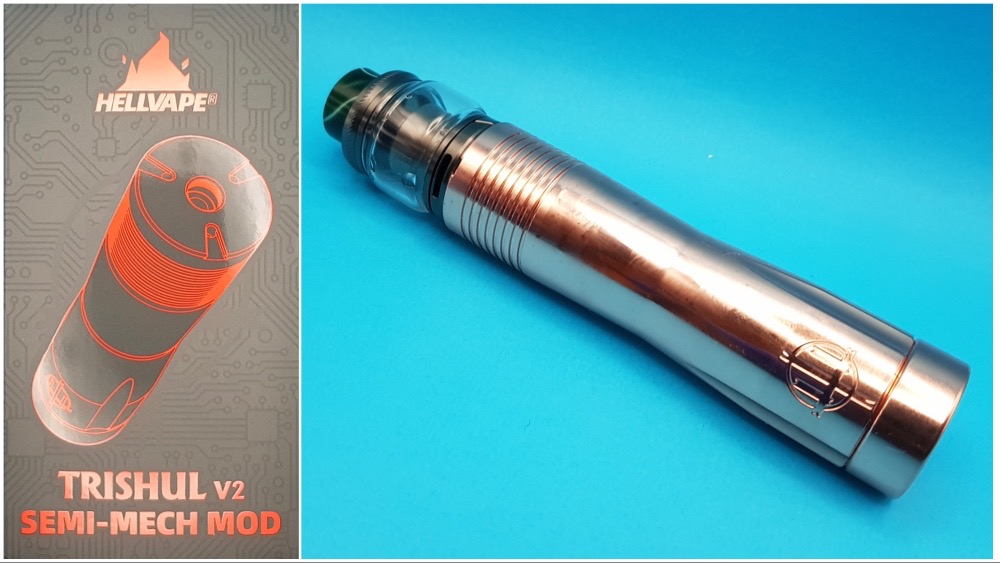