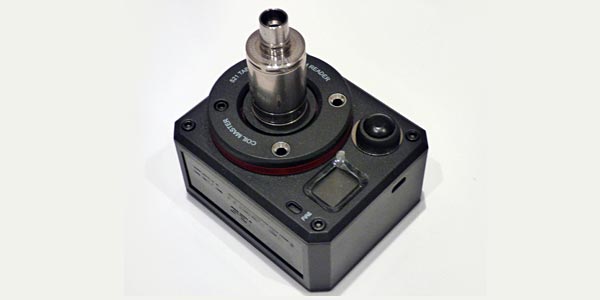 The 521 Tab from Coil Master is intended as “an all in one” workstation for vapers who enjoy rebuilding. Featuring an Ohm Meter, a voltage checker and having the ability to fire your coils this is certainly a very useful piece of kit! So let’s take a look and see what it offers. 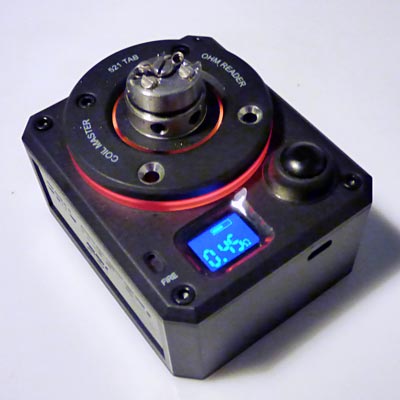 The good thing about this device is that it is of a decent size offering a nice platform to work on when rebuilding however it is not overly large and you can hold it in the palm of your hand. The overall material is hard plastic so this keeps it from being especially heavy.

The top of the device mainly features the rebuidable platform which is raised up from the box itself.  The 510 pin is spring loaded and all the atomizers I have tried fitted well. Size-wise it is very good and far more enjoyable and easier to work on than a small atty stand or a mod. Also located on the 521 Tab top you will notice the OLED screen which displays your atomizer's resistance or device voltage. The display is bright and suitably large. To the left of the display there is an LED that lights up blue when the Coil Master is switched to firing mode (the OLED screen confirms this with a smoking pipe image) and there is also a nice large button so you can fire your atomizer without having to screw it on to your mod which is a very useful feature!

At one side of the 521 Tab is a button which has three settings. By default in the middle position the device is switched off. The other settings are for the Ohm Meter function and for firing the atomizer. At the other side of the device is the Micro USB port so you can happily charge your battery that way if you wish.

The base of the device is where you will find the battery compartment. The lid is held on by magnets but it is a little wobbly. Now if this was an actual mod that would be an issue for me but considering this is just something to aid rebuilding I don’t consider it a problem especially when the device will be placed on a desk or workbench. The 521 Tab takes a single 18650 battery and there is a ribbon to assist with removing it. 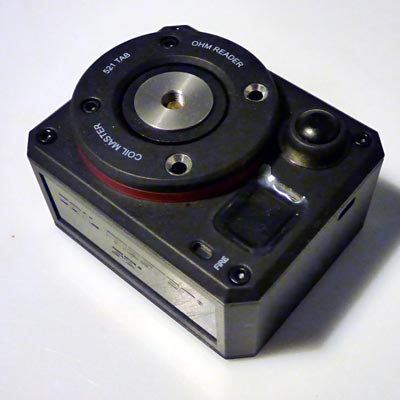 The overall look of the device is really good. One feature I really like is that when the 521 Tab is in Ohm Meter mode two LED rings light up in red which looks seriously cool! Black and red always works well and gives the 521 Tab something a Knight Rider vibe when it is lit up. In terms of resistance measuring I haven’t noticed any problems with my atomizers and the 521 Tab seems accurate.

The Voltage Meter is a separate curved piece that plugs into two holes on the top of the 521 Tab and it has a threaded pin to allow you to screw on your mod/mechanical mod etc. I fitted my GP Paps V4 to it and then fired the mod and it did give me a Voltage reading. Now there is one slight issue with the Voltage Meter which may annoy some people more than others. If you have a mechanical mod with a hybrid top cap the pin on the 521 Tab will not be long enough so you won’t get a reading. This issue has been mentioned in a few of the other reviews because there are a lot of hybrid top cap mechs out there but to be honest all of my mechs have top caps so it’s a non-issue for me personally. It is of course something to bear in mind.

Another issue that has been mentioned is that while the device will read down to 0.01ohm it is not supposed to be able to fire coil resistances lower than 0.2ohm for safety reasons but some reviewers mentioned that the 521 Tab they received would fire regardless. I checked this with a 0.012 Ni200 build that I have in one of my atomizers and it certainly did not fire but just to be on the safe side take care not to fire builds lower than 0.2ohm on this device.

The first batch of 2000 units sent out by Coil Master were reported to have an issue with atomizer compatibility. Apparently 5% of atomizers currently available on the market did not work with this product. Being very keen to remedy any flaw Coil Master have started that anyone who purchased one of the first run models will receive a new one free of charge. According to Reddit this information was posted on Coil Master’s website. At present I have not noticed any issues with the one sent for review so I assume it’s from a more recent batch. 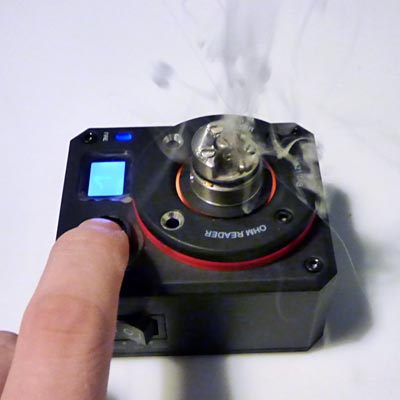 Without a doubt this is a very useful product. It might look like a glorified Ohm Meter but it really does so much more. The 521 Tab makes a really decent workstation and the fact that you can fire your atomizer is great because it means you can happily heat up and pinch the coil with your ceramic tweezers without having to transfer it to your mod. If you are really desperate you can actually vape your atomizer while holding the 521 Tab in the palm of your hand and yes I have done it for a laugh! In addition having an included Voltage Meter is also useful to anyone who enjoys using mechs.

Also included with the product are two Alligator test leads for wire resistance measuring. I assume you could also use them to test the coil resistance of atomizers that don’t have a 510 pin and require a separate adapter such as the GP Spheroid and Heron.

If you do a lot of rebuilding then the Coil Master 521 Tab makes for a very useful product. I have certainly enjoyed using it and it makes everything just that little bit more convenient, in addition it has some smart looks and a nice variety of functions.

For anyone who only does a small amount of rebuilding then this will be less useful but for users who are constantly building their atomizers and tweaking their various builds then this is a great product to own!

The Coil Master 521 Tab is typically priced at £39.99. Many thanks to Grey Haze who kindly sent this to Planet of the Vapes for us to review. If you are interested in picking one up you can buy it here from Grey Haze.