The Truth Initiative continues to prove that ‘truth’ the last thing it is concerned about when it comes to vaping and tobacco harm reduction. Its latest effort will no doubt be spun and promoted to say large numbers of teens signed a petition against JUUL Labs – but it will have been due to the offer of rewards for doing so.

At one point, the focus of the organisation was to reduce smoking rates, “dedicated to making tobacco use a thing of the past,” but this mission vanished when vaping took off.

It claims ownership of reducing teen cigarette “down from 23 percent in 2000 to less than 6 percent in 2018”, and pledges “to continue the fight and take on the new epidemic of youth e-cigarette use.”

The Truth Initiative now says: “JUUL has shown its true colours. Now it’s time to call them out!” 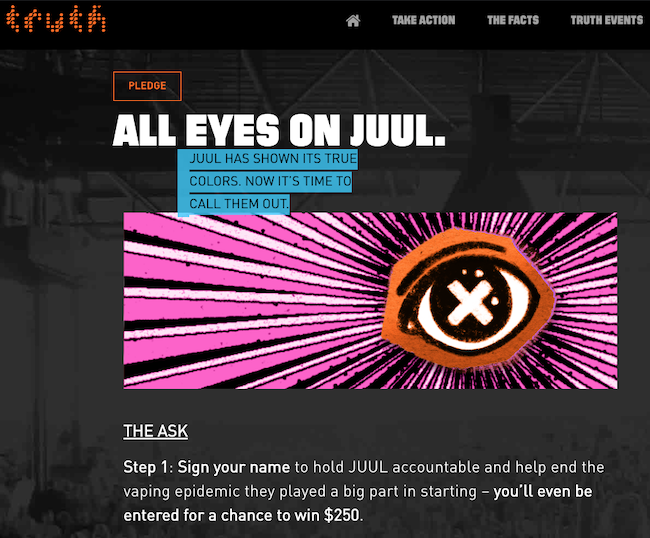 It is asking teens to sign up to a petition, “to hold JUUL accountable and help end the vaping epidemic they played a big part in starting.”

Only there is no epidemic, JUUL didn’t start one – it just contributed to the record drop in teen smoking rates the Truth Initiative would like to claim the plaudits for.

Plus, the teen signatures are being coerced through bribery: “You’ll even be entered for a chance to win $250.”

It writes: “Not only did JUUL play a huge part in causing the vaping epidemic, they’ve now teamed up with the same industry that denied for DECADES the dangers of smoking cigarettes. Basically, JUUL turned out to be exactly what we always thought they were: full of crap.”

Is such an attack warranted? Can an organisation dedicated to truth about smoking back up such a claim? It tries by citing three reports dated 2010, 2011 and 2014 – all out of date and ideas. In fact, one of the authors, Dr. David Abrams, has come to recognise the vital role vaping is playing in combatting tobacco-related disease. 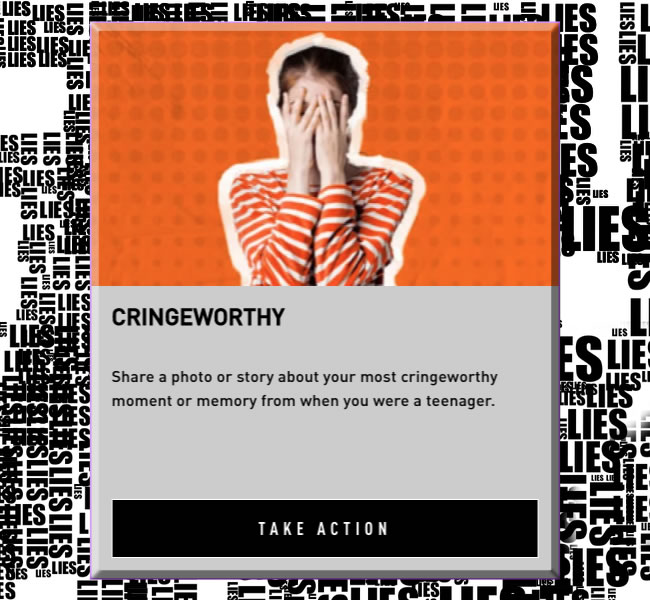 What drives this behaviour?

The Truth Initiative receives the bulk of its funding from The Tobacco Master Settlement Agreement, and declining tobacco sales meant the end was in sight for a management used to the gravy train.

One employee said about The Truth Initiative: “Not a very meritocracy guided organisation in terms of titles or compensation. The hardest working and most intelligent individuals are not acknowledged and end up leaving.”

Another confirmed the lack of professionalism: “Majority of the senior management are cliquey and have favourites. Appraisals and advancements are heavily based on which senior management you're ‘buddies’ with or how ‘popular’ you are in the organization instead of on your performance. Also, the atmosphere feels like high school with the gossips, playing favourites, and personal agendas.”

They highlighted why there’s a reliance on maintaining money coming in with comments about the free lunches and that the management is busy using the company American Express credit cards to spend on “spas, gift cards, personalised limo services and personal items.”

The Truth Initiative helped invent the teen vaping ‘epidemic’ because it serves its purposes to have something else to campaign on and secure further funding for. POTV would use its own words against it and say it is “full of crap”, but we’re better than that.

Elsewhere on the Truth Initiative website, it asks teens to share their most “cringeworthy” memory from when they were a teenager. We wonder if the memory of an organisation prioritising spas, gift cards, personalised limo services and personal items over the lives of smokers might figure in the retold tales?