Wanda de Kanter is a chest physician and staunch anti-smoking campaigner at the Antoni van Leeuwenhoek/ Netherlands Cancer Institute. Upon seeing the study she fired back that e-cigarettes are “a lousy way to quit. Even with coaching, which does not happen in real life situation! Only 18% quit.”

She contended that this means people are “staying addicted”, which (in her opinion) is “not safe for lungs and cancer patients”, and “addicting children stepping up to cigarettes”. 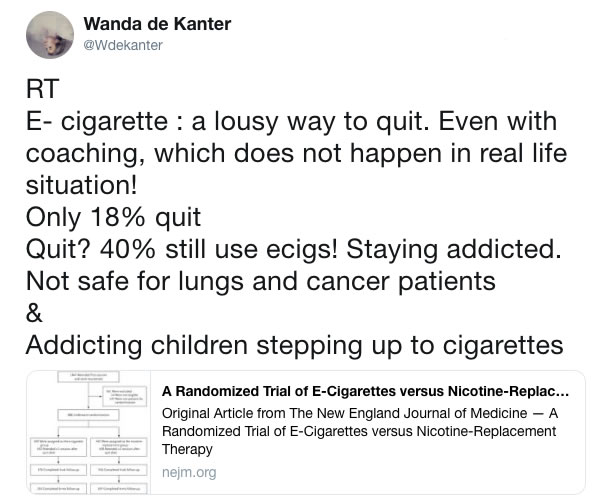 Public Health England’s Martin Dockrell took her to task: “I wonder if you could tell me about the quit support you offer that had better than 20% CO [carbon monoxide] validated cessation at 12 months because I don’t know of one and if it’s out there, I really should.”

Professor Linda Bauld added that it was “worth noting that the two publicly funded national evaluations I led of gold standard smoking cessation treatment in UK health services resulted in 15% quit rate at 1 year in 2004 + 8% in 2014.”

To which Konstantinos Farsalinos concluded: “Even the best possible evidence is never enough for people with pre-determined views. How scientific is that?”

Martin Dockrell predicted these kind of responses before Christmas when he teased a question that ‘if’ a study were to be released that demonstrated vaping had twice the success rate of NRT, he wondered what people considered would be the reasons why it was rejected by tobacco control zealots.

Others complained that the study only tested once for carbon monoxide. “This is not correct,” wrote Dockrell. “CO tests were done at baseline, on the quit day, and every week for the next four weeks in line with the treatment standard. CO testing was repeated at 12 months.”

Chapman and McKee were swift to publish their negative thoughts too, to which Dockrell responded: “When the weaknesses have more weaknesses than the study they critique.”

He continued: “The previous RCTs also found EC more effective, even though the devices were obsolete when the studies were published. The effect size was smaller because the devices weren’t as good.”

“The ‘highly selected group’ were smokers who want to quit. This is entirely normal for a stop smoking survey. Who else would you recruit? Non smokers or smokers who don’t want to quit?”

“It is not a weakness of an RCT that it is not a cross sectional population survey. RCTs are generally considered stronger, although in my view they are just different and both are useful. Also x-sectional surveys rarely use CO validation, and we all know how much that matters.” 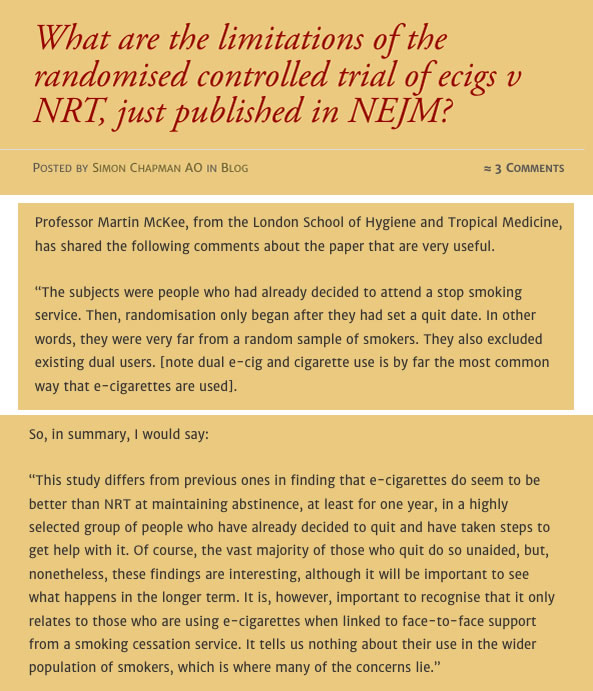 Writer and harm reduction advocate Michelle Minton said that this study should bring about a sea change in opinions, but “tobacco fascists are already flinging around the thinnest arguments trying to discredit it.”

One major positive was that news of the study did travel around the globe. On Sky News Australia, Nick Cater pointed out: “What’s ludicrous is that a very dangerous way of consuming nicotine is legal in this country, and a far safer way is illegal.”

Over on Studio 10, Dr Joe added: “We have all the evidence in the world that cigarettes are killing people, and the government is selling those is every street corner shop.”

Oxford University’s Professor Paul Aveyard commented: “Previous trials had suggested that e-cigarettes were effective and that, in the short-term, that they were also safe and tolerable. This trial really adds to our confidence in this finding.”

“Recognising the grip that smoking can have for some, we need to help as many people as possible to give themselves the best chance of success by using aids like e-cigarettes each time they try to stop smoking.”

King’s College London’s Ann McNeill added: “This is a very well-carried out randomised controlled trial using the highest standards of reporting and it demonstrates that unlicensed e-cigarettes were almost twice as effective as licensed nicotine replacement therapies for smokers attending Stop Smoking services.”

UCL’s Robert West stated: “This study is of huge significance.  It provides the clearest indication yet that e-cigarettes are probably more effective than products such as nicotine gum and patches.  It fits previously published trend data showing an increase in quit success rates in England and the US linked to more people using e-cigarettes.”

He too believes “This was a very high quality study and shows strong evidence that ecigs help smokers quit.”

Dr Jamie Brown called it a “landmark trial” and agreed that it was “conducted to the highest standards”. He said it offered “compelling evidence” and continued to add: “This study should reassure policymakers and health professionals – mainly beyond the UK – who have until now been hesitant to recommend e-cigarettes for smoking cessation on the basis that there was a lack of high-quality trial evidence.” 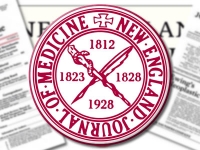 Twice As Good As NRT