Twice As Good As NRT

Smokers attending UK Stop Smoking services were twice as likely to remain smoke-free if they had used vaping and counselling than if they’d used traditional nicotine-replacement therapies. A huge randomised control trial demonstrated that vaping works and there is no substance to claims it is a gateway to smoking.

Martin Dockrell, Public Health England: “What if a world class study found electronic cigarettes twice as effective for quitting as NRT? Well it has and if you reject it before you read it then you really need to ask yourself some hard questions.”

Professor Peter Hajek is the lead researcher for the study. The academic from Queen Mary University London said: "Although a large number of smokers report that they have quit smoking successfully with the help of e-cigarettes, health professionals have been reluctant to recommend their use because of the lack of clear evidence from randomised controlled trials. This is now likely to change."

Co-author Dunja Przulj added: “This may ultimately further accelerate the reduction in smoking and in smoking-related diseases.” 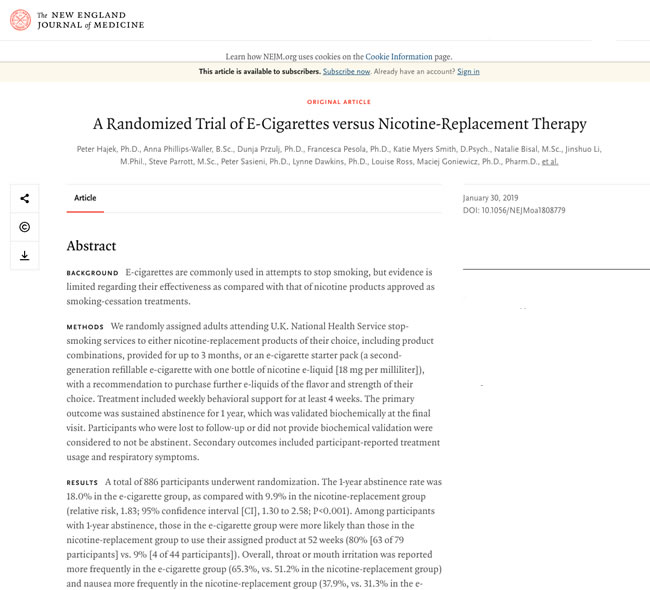 To date, opponents of vaping have been very reluctant to accept that vaping works as a method of helping smokers to reduce their risk of tobacco-related harm. This piece of work, the largest conducted to date, offers up ground-breaking evidence that should be incorporated in all legislative thinking from now on.

The study looked at 886 smokers attending UK stop-smoking services. The team write: “We randomly assigned adults … to either nicotine-replacement products of their choice, including product combinations, provided for up to 3 months, or an e-cigarette starter pack (a second-generation refillable e-cigarette with one bottle of nicotine e-liquid [18 mg per millilitre]), with a recommendation to purchase further e-liquids of the flavor and strength of their choice.”

The treatment also included a month of behavioural support delivered by experts in cessation. The team’s primary goal was to measure cigarette abstinence at the end of 12-months. They elected to treat anybody who could not be contacted as having lapsed back to smoking – so the real rate of success could actually be higher. Participants were also assessed on health outcomes; measurements were taken to check on respiratory symptoms.

Inevitably, opponents to vaping have not accepted this paper as they should have, raising objections that it doesn’t reflect ‘real-world’ use and repeating nonsensical fears based on a mouse study. One quickly penned a piece in The Conversation but, given they increasingly represent a lunatic fringe, we are not quoting or linking to it.

Peter Hajek, Katie Myers Smith and Hayden McRobbie collectively wrote about an incidental benefit for those who failed to quit: “Among smokers who didn’t manage to quit, there were some in both study groups who reduced their smoke intake by at least 50%, but there were significantly more of them in the e-cigarette group.”

Noting caution, they added: “On-going vaping among the long-term abstainers, however, could be seen as a bad thing if using e-cigarettes for one year leads to vaping over many more years, and if this causes health problems. Although the risks of long-term vaping on health are estimated to be less than 5% of the risks of smoking (no health risks from vaping were found in one gold-standard study looking at over two years of e-cigarette use), this could still present an avoidable risk.”

Plus, countering the objections to long-term use of nicotine: “These ex-smokers are, of course, still continuing to use nicotine through vaping, but this does not have the major negative effects on health that cigarettes have.”

The team is continuing to track the participants to amass data on “how long the long-term vapers continue to vape for and what effect this has on their health and their relapse rate.” 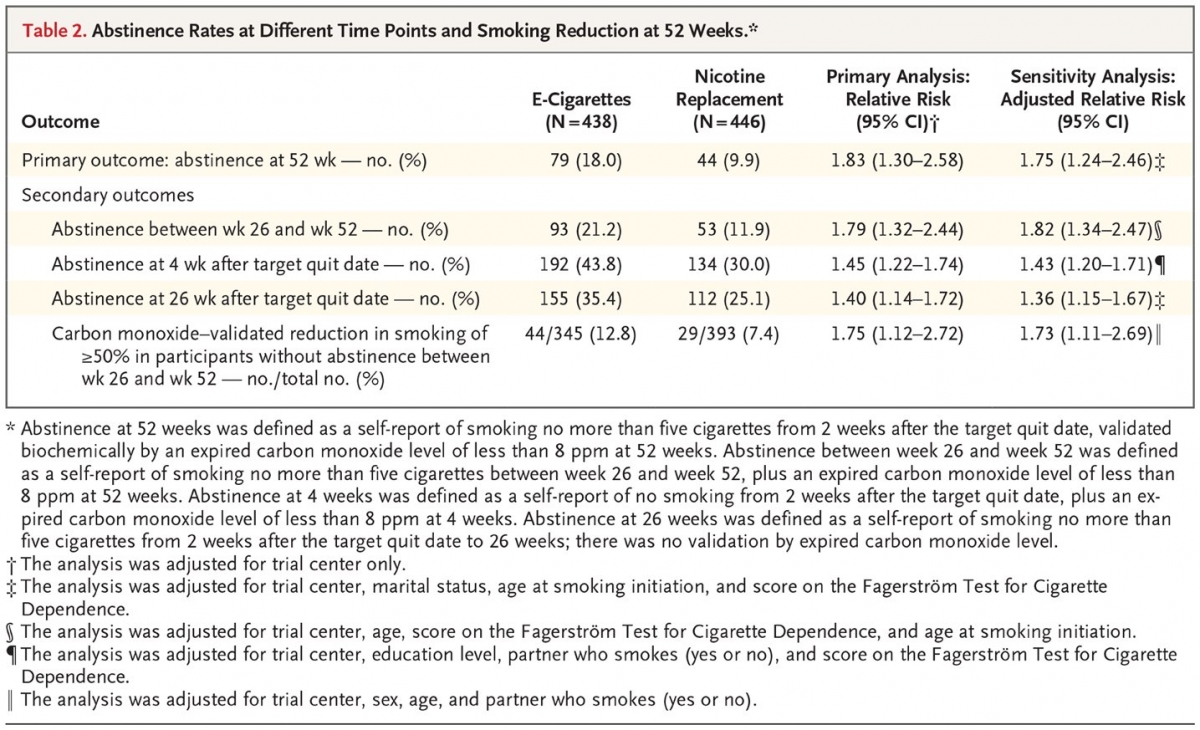 Public Health England: "All stop-smoking services should welcome smokers who want to quit with the help of an e-cigarette."

Charles Gardner, Foundation for a Smoke-Free World: “This is only the 3rd randomized control trial ever conducted to test if e-cigarettes help smokers quit or cause more smoking. This was the biggest one so far. Looks pretty clear that everyone who claimed that vaping is a gateway to smoking was dead wrong.”

Richard Miech, the University of Michigan: “This is great news for cigarette smokers who want to quit. This evidence is persuasive.”

Jamie Hartmann-Boyce, Oxford University: “More research is needed on the effects of long-term electronic cigarette use, but experts agree e-cigarettes are considerably less harmful than smoking, so switching is likely to bring substantial health gains.”