A 2016 study by Andrey Khlystov and Vera Samburova prompted The Sun to write that it had been proven “E-cigs can kill”. The work drew widespread condemnation for its poor methodology and the probability that the pair had measured dry-burning and not normal vaping conditions. Farsalinos failed to replicate the findings in that and similar studies, and disgruntled pair took to the letters section of Food and Chemical Toxicology journal. 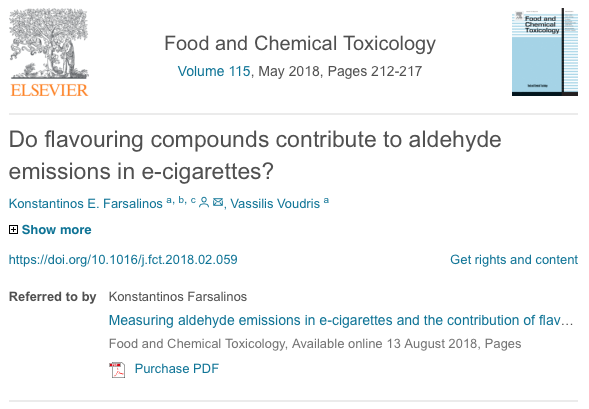 In May, Farsalinos and Vassilis Voudris published a paper in Food and Chemical Toxicology titled ‘Do flavouring compounds contribute to aldehyde emissions in e-cigarettes?’ In it, they stated:

Despite detecting formaldehyde present, Farsalinos and Voudris wrote: “the absolute levels were minimal.”

Khlystov and Samburova are clearly smarting from previous criticism and issued a letter attacking Farsalinos and Voudris: “Our purpose is to point out and/or correct inconsistencies and inaccuracies in that paper.”

Laughably, the non-experts on vaping state: “the methods used by Farsalinos and coworkers[sic] that are not suitable for e- cigarette aerosols studies,” and “Farsalinos and Voudris also make several misleading and outright false statements.”

Khlystov and Samburova go on to give a limp justification for their adoption of a flawed testing protocol and heap further insults onto Farsalinos and Voudris, implying they had secret motives for wanting to debunk experiments that discovered vast quantities of formaldehyde.

Dr Farsalinos produced a fourteen-page document by way of response.

“One of the major issues was the lack of verification that realistic use conditions were examined in the laboratory settings and that dry puffs were avoided. This phenomenon, which every e-cigarette user knows, understands and detects, has been largely neglected by researchers,” he writes. “A systematic review identified only 4 out of the 32 studies to have controlled the experimental conditions for the generation of dry puffs.”

He states that the only satisfactory way to ensure test conditions meet normal vaping conditions is to ask “experienced vapers to test the e-cigarette equipment (devices and liquid) at the power settings and puffing parameters that will be used in the laboratory.”

Farsalinos points out that different coils heat at different rates and that wattage alone is no indication of the potential for overheating. Secondly, that the time between puffs relies on the wick being able to convey liquid to the coil fast enough. Thirdly, that not puffing enough at high power settings over a longer time frame will also result in a dry-burn condition.

Next, the focus on using old, dated atomisers for experiments is one that is destined to fail, especially if using conditions replicating direct lung inhales. He emphasises that modern atomisers are required for such research.

“Khlystov and Samburova seem to consider power as the only parameter determining aldehyde emissions, ignoring other important characteristics such as the design of the atomizers and consistency in production quality” – Farsalinos

But then Konstantinos Farsalinos turns the screw: “The letter by Khlystov and Samburova includes several irrelevant, invalid and confusing arguments and comparisons.” 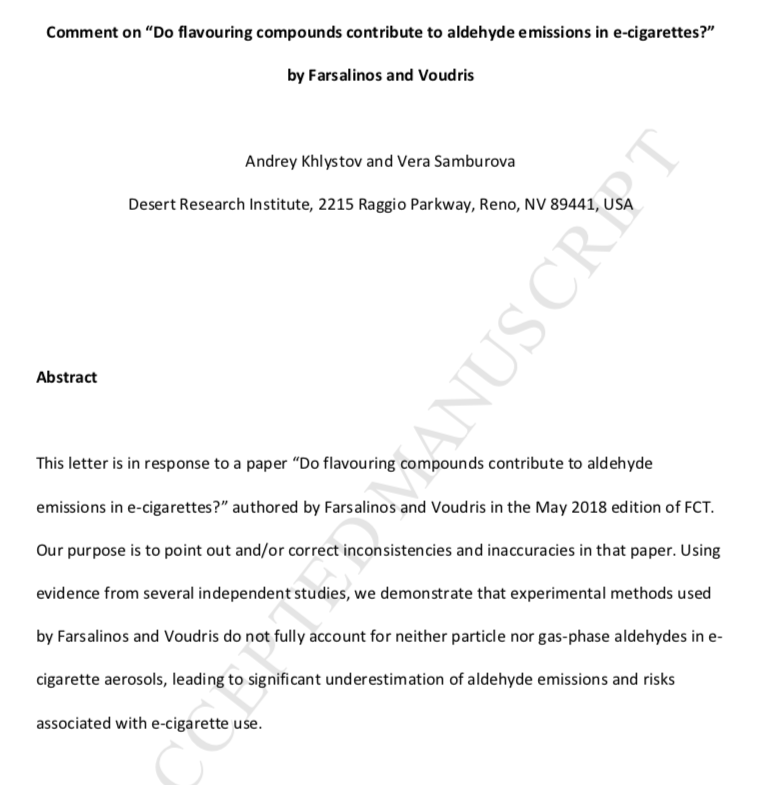 “Additionally, since Khlystov and Samburova cite the study by Sleiman et al. (2016), I take the opportunity to clarify that the experiments of our replication study (Farsalinos et al., 2018b) were also performed in the same laboratory and in fact Gillman was a co-author in that study.”

He contends that any debate from Khlystov and Samburova about the performance and emissions of CE4 atomisers is irrelevant. As we all appreciate, CE4s haven’t been used in any numbers since the early days of vaping and are all but obsolete.

Farsalinos says Khlystov and Samburova are “highly inconsistent in accepting or rejecting measurements”, guilty of “selectively accepting results based on the values reported,” and “should review the literature very carefully and should properly understand the complexities and the different parameters that could affect study outcomes before rushing to unjustified and insulting conclusions about other scientists.” 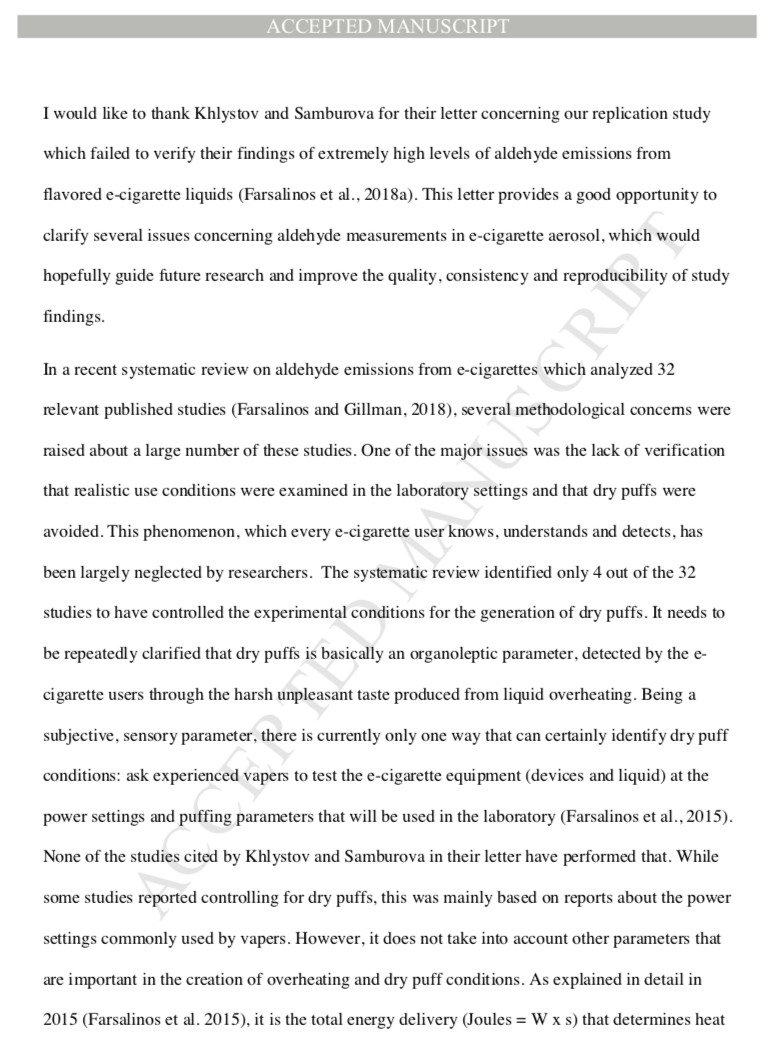 Farsalinos again lays into the pair for their hit and miss methodology, that their finding “has never been documented in any other study,” that serious questions are raised about the validity of their study, “to the point that they should consider the possibility of retracting their paper.”

Finally, Farsalinos rounds on just one of the pair: “it is important to notice the conduct of Dr Khlystov, who repeatedly denied reporting the liquid brand they used in the experiments in both private and public requests. I will let readers judge on this behaviour.”

It’s a damning destruction of the experiment and arguments from Khlystov and Samburova. More than academic point scoring, we hope that other researchers will read Farsalinos’ response and incorporate it into their future research planning stage. 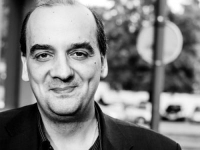