The Wrigley Company was founded in 1891 and made its name selling a range of chewing gum. Ever since a multi-billion pound takeover deal in 2008, the company fell under the umbrella of the mighty Mars Incorporated. The company has launched a legal attack on a small vape company over the theft of its branding and infringement of its trademarks.

Juice manufacturers have been aware of objections to certain imagery and logos for a number of years. Responsible eliquid makers have gone to great efforts to create their own branding, but a small minority of companies persist in doing nothing more than stealing the intellectual property of major food and drink corporations. While some see no moral problem in that, the vape community suffers as a result of the bad publicity it generates.

In 2015, anti-ecig campaigners attacked vaping because of the “flashy flavours that are primarily targeted at teens”. Even one of vaping’s biggest advocates, Phil Busardo, struggled to remain calm when talking about Cloud Candy – a juice company he encountered and castigated: “The time to change isn’t ‘when the rules come out’, the time to change is NOW!”

In 2016, we reported the incident where Knowsley Council’s Trading Standards had removed many bottles of eliquid from stores across Huyton, Kirkby and Prescot. Vendors were selling bottles that ripped off the branding from Pokémon, Gummy Bears, Krispy Kreme donuts and the Simpsons.

This year witnessed Dr Konstantinos Farsalinos losing his temper over the wholly irresponsible behaviour of the people responsible for making those liquids and the vendors selling them: “In my opinion, this is absolutely unacceptable and a clear indication of irresponsible behaviour and marketing tactics. Even if there is no such genuine intention, none will be convinced. This is irresponsible behaviour not only from the producers, but also from the retailers who sell these products and from the vapers who buy these products. Besides the regulators, who will do their job, the responsible part of the e-cigarette industry must immediately target and expel these members, while retailers should request the removal of such labels and packaging design or deny getting such products for retail.”

A company called Chi-Town Vapers has been selling a liquid with a yellow label bearing the words Joosy Fruit Gum, and another liquid with an arrow and a green label worded Dbl Mint e-Liquid. Wrigley filed a trademark infringement lawsuit this week, and pointed out they are also rip[ping off the logos for Mountain Dew and Nutella.

The lawsuit states: “Rather than develop their own brand names for their products, defendants have chosen to market their e-liquid for electronic cigarettes using the trademarks of various other well-known companies, including Wrigley’s brand names, without authorization or license.”

While Chi-Town Vapers run a website that appears as though it has come through a time portal from the 1980s, the company claim to have “millions of customers” and have “over 30 years of experience”!

Planet of the Vapes contacted Chi-Town Vapers for a comment about Wrigley’s action but, despite saying, “we’re always here for you and here because of you”, nobody from the company could be bothered to get back to us. 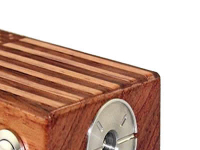