Two studies have been released that look at how smokers quitting meet with success and cope with life after cigarettes. We consider how electronic cigarettes relate to their findings.

It is accepted that there is a curious difference between the incidence of smoking found between the white and black American populations. Not just that, but the rates for lung cancer are higher for black males than their white counterparts and yet lower for women. The Yale School of Public Health carried out a study to examine these interracial differences and the results have been published in the Nicotine and Tobacco Research journal.

The study involved the analysis of historical data for people born between 1890 and 1990. Despite confirming that people are more likely to have quit as they get older, the findings reveal a distinct difference along racial lines. The authors believe “that racial differences in rates of absorption and/or metabolism of the toxic components of cigarette smoke may be responsible”.

At the Massachusetts General Hospital, researchers studied patients with serious mental illness who quit smoking to discover if the benefits of quitting outweighed the impact of quitting on physical and mental health. Patients who quit within this cohort of smokers tend to amass more body weight than other quitters. This in turn can lead to obesity-related health problems and feed back into poor mental health. Their study was published in the Journal of Clinical Psychiatry. 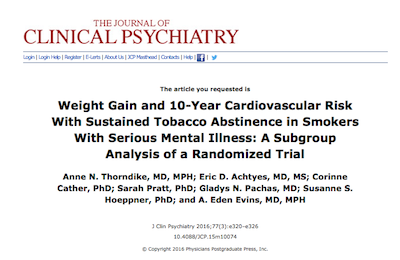 Warning of the potential for risks to build in the future if weight gain isn’t addressed through diet or exercise, Anne Thorndike said: “[Our] findings highlight the importance of smoking cessation among this vulnerable population, but they also indicate that continued weight gain associated with tobacco cessation is likely to contribute to a rise in the already high rates of obesity, diabetes and hypertension among people with serious mental illness.” But, on balance, the team believes that the immediate benefits of smoking cessation by far outweigh the possibility for future physical health issues.

Which brings us to the part the vaping can play in aiding those seeking to quit. Members of the Planet of the Vapes forum will attest that stopping smoking by taking up vaping made the transition far easier than other attempts. Also, as it doesn’t leave idle hands during the transition, there is a reduced temptation to eat and add on unwanted weight.

Studying 695 smokers in Dallas, Fort Worth and Indianapolis the researchers discovered that intensive users of vaping products were six times more likely to quit successfully than non-users. An intensive user was defined as someone who vaped at least once a day for a month or longer. Similar positive results were reported by a research team from the University of Leuven in Belgium.

Professor Robert West has been looking at the success of vaping as a quit tool on behalf of Smoking England and Cancer Research UK over a number of years. His latest findings demonstrate that around 25% of current or recent ex-smokers vape in order to cut down or quit – and the POTV forum is packed with tens of thousands who made the switch successfully.