“There is a mistaken perception that the problem of smoking has largely been addressed, which might be because smoking, like many other societal ills, does not affect everyone equally. The smoking rate remains around 25% in many of the poorest areas of the country, whereas it is around 5% in more prosperous areas,” said Jones.

He pointed out that serious consideration has to be given to heated products as, “those who remain have withstood years of public health campaigns and societal pressures, as well as the rise of e-cigarettes as an alternative to smoking.”

Jim Shannon, the DUP’s Shadow Spokesperson for Health, congratulated Jones for bringing the matter before the House, but cautioned: “Does he agree that advice must be provided first about smoking cessation, rather than about vaping or any other alternative method? Does he also agree that although there are no long-term indications of the effects of vaping, whether burned or heated, the chemicals that are used will not be neutral, and there will therefore always be an element of concern and a need for greater research?”

Jones agreed that there is a need for research on the effects of alternatives to tobacco, adding: “E-cigarettes have had a revolutionary effect on efforts to reduce smoking rates in this country. [They] have had a highly positive impact on helping smokers to quit.

Then Jones explained how history was made in 2010: “A particularly enlightened member of the behavioural insights team, David Halpern, influenced the Government’s decision not only to resist banning e-cigarettes—other countries were poised to do so—but to seek deliberately to make them more widely available. David Halpern advanced the principle of harm reduction: it is more effective to give somebody a reduced risk product than to insist unrealistically on immediate total abstinence.”

This led on to his argument in favour of HNB: “Consumers’ principal reason for using e-cigarettes is to give up smoking. According to Action on Smoking and Health, 62% of ex-smokers use e-cigarettes for that purpose, and the majority of users have successfully quit smoking. However, it might well be that we have now passed the apogee of the e-cigarette effect. According to the Office for National Statistics, the number of new e-cigarette users peaked at 800,000 in 2013-14. Since then, the number has approximately halved every year, down to 100,000 in 2016-17. It is not the case that the remaining smokers do not want to quit; the ONS reports that nearly 60% do. For some, however, the experience of using e-cigarettes does not come sufficiently close to that of smoking to be an adequate substitute. In this context, I urge the Government to consider the alternatives.”

“In Japan,” said Jones, “heated tobacco is proving very successful in helping smokers to quit. Evidence there shows that 70% of heated tobacco users give up smoking altogether. That is a better conversion rate than for any other alternative nicotine-containing product on the market.”

Charles Walker MP spoke about his struggle to quit smoking. Despite giving up 15yrs ago, the memory of how difficult endured: “I had various failed attempts to give up smoking because it was a choice between smoking and chewing gum, which really was not a successful pathway—it took me 12 years before I could finally give up. Any method that helps the process has to be a good idea.”

Jones replied: “Tests on heated tobacco carried out by the tobacco industry and scrutinised by the Committees on Toxicity, Mutagenicity and Carcinogenicity of Chemicals in Food, Consumer Products and the Environment found a reduction of up to 90% in the number of toxic chemicals emitted by heated tobacco compared with combustible cigarettes. That is not greatly dissimilar to Public Health England’s finding that e-cigarettes are up to 95% safer than combustible cigarettes.”

This said, the Science and Technology Committee’s July 2018 report highlighted the need for independent research. The government committed to including heated tobacco in their annual review of e-cigarettes. However, this year’s e-cigarette review contained no mention of heated tobacco.

“We are falling behind our international peers on this front,” stated Jones. “The United States Food and Drug Administration recently produced research that concluded that heated tobacco is appropriate for the protection of the public health because, among several key considerations, the products contain fewer or lower levels of some toxins than combustible cigarettes.” 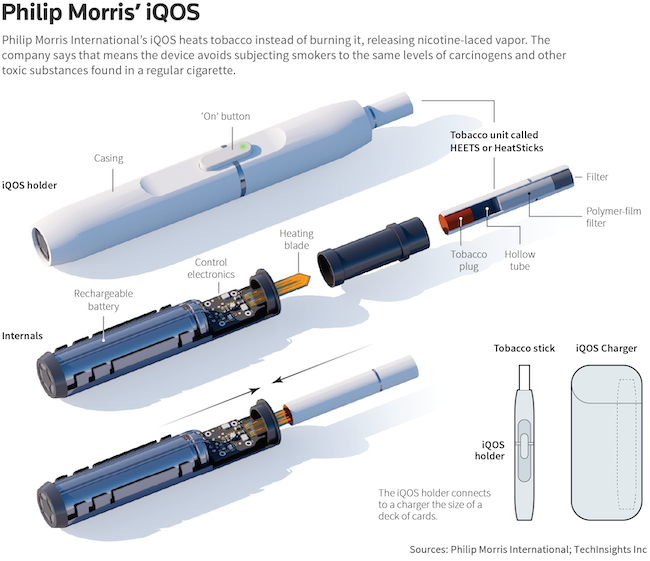 Jones wanted the Government to commit to producing or supervising independent research into heated tobacco this year. He continued: “We have seen the value of e-cigarettes in helping people to quit smoking, and if there is a prospect that heated tobacco could help to bring down smoking rates further, are we serving the interests of public health by not carrying out the promised research? The research will not happen by itself. The responsibility to produce it lies with the Government.”

He said the lack of research probably came from a lack of money. In quite a turn-up, Jones then suggested who could pay for the research – and it was quite surprising: “I urge the Government to consider requiring tobacco companies to pay for the research to be carried out, thereby circumventing the need to apportion departmental budgets to it.”

Then Seema Kennedy, The Parliamentary Under-Secretary for Health and Social Care, spoke: “In the 2017 tobacco control plan, we set out our ambition to reduce smoking and ensure a smoke-free generation. Part of that strategy is about helping people to stop smoking by adopting the use of less harmful nicotine products. They may, for example, take up chewing gum. I have never seen my hon. Friend Mr Walker spit out his gum on the pavement.”

This gave Charles Walker another chance to sing the praises of vaping and other reduced harm products: “It took me 12 years because the only choice besides smoking was nicotine gum, and it was simply revolting. I would have quit a lot earlier if we had some of these modern products around 15 years ago.”

Now it was Kennedy’s turn to demonstrate to America that our politicians are switched on when it comes to tobacco harm reduction: “For a lot of people, nicotine substitutes are a good transition to giving up smoking or other things completely. We have seen a dramatic rise in the use of e-cigarettes from 1.6 million users in 2014 to about 2.5 million in 2017. Encouragingly, about half of them in England have quit smoking completely. The evidence is increasingly clear that they are significantly less harmful to health than smoking tobacco. They can help smokers to quit, particularly when combined with stop smoking services. Recent studies have shown they can be twice as effective as nicotine replacement therapy in helping people quit smoking. As my right hon. [However], the sales of e-cigarettes are plateauing, and we are coming to the stubborn 5% of people who are still smoking.”

Kevin Barron said: “The Minister will know that expenditure on smoking cessation programmes has fallen rapidly in the past few years. I promoted a ten-minute rule Bill to put a levy on tobacco companies to fund smoking cessation programmes and research into less harmful products. The greatest problem we have had for many years—this is anecdotal at the moment—is that products such as patches and gums cannot get heavy smokers to quit. There is some evidence, although it is not firm, that heated products are a way of getting to people who have a real problem with addiction.”

Seema Kennedy didn’t believe that getting tobacco companies to fund research directly would work, but she was open to the idea of increasing a levy on them and using those funds to further scientific knowledge…but that would require researchers to apply for funding: “I recognise that more independent research on heated tobacco products would be helpful for understanding their relative risks. The Department and its arms’ length bodies will consider research proposals in this field, but at present none has been forthcoming.”