A government proposal, an intentional mistranslation and a letter were to form the subject of this article, but the Swedish government has rushed through legislation at speed. Planet of the Vapes spoke to NNA Sweden’s Chairman, Atakan Befrits, about what is taking place.

It was sent as a matter of urgency when NNA Sweden discovered a new tobacco law for Sweden had been agreed by the Social Committee in Parliament on Thursday December 6th and published online on Friday December 7th.

The cosignatories believed that the proposed law would be “unnecessarily damaging to public health, individual health and to the goal of ending cigarette smoking and smoking related disease.”

They went further, and called it “a Human Rights to Health violation.” 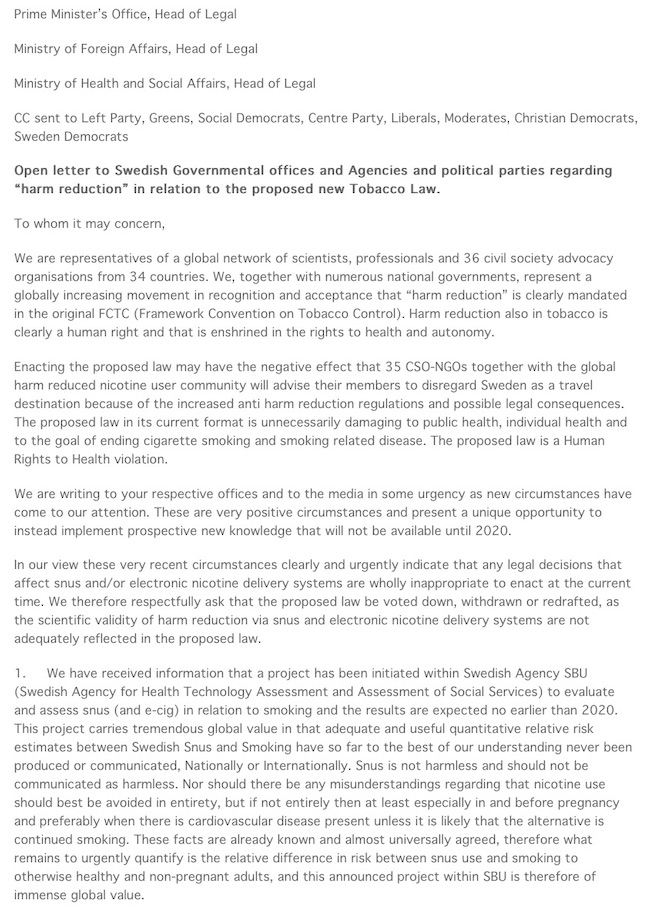 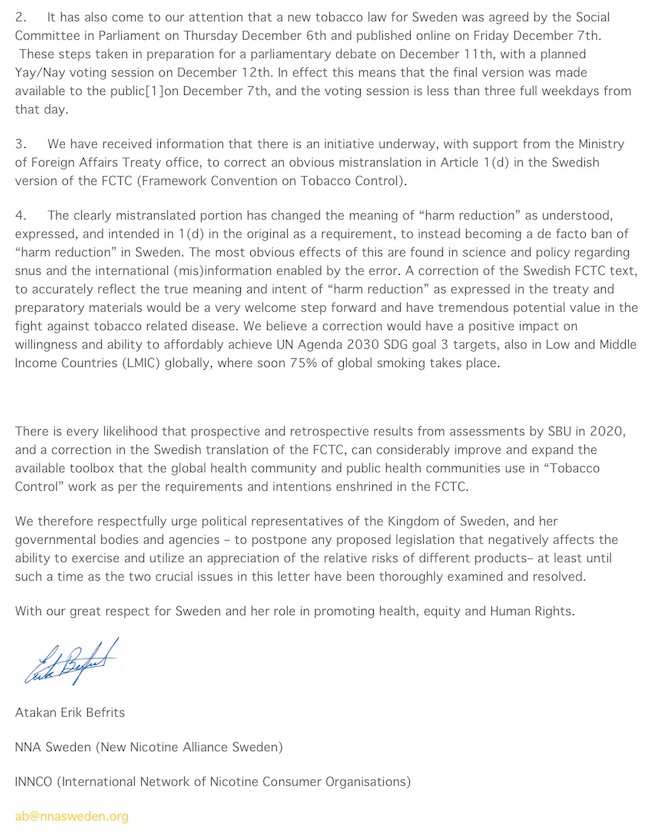 The letter stated the issue boiled down to a clearly mistranslated portion that changed the meaning of “harm reduction” as understood, expressed, and intended, “to instead becoming a de facto ban of ‘harm reduction’ in Sweden.” This has clear implications for snus and vaping.

The Swedish government elected to ignore the submission and voted the measures through. A parliamentary debate was conducted on December 11th, with the voting taking place the following day.

“We had a good go with getting traction from the Sweden Democrats on changing their minds on vaping, unfortunately the news killed that very nicely anyway due to other parties strengthening their resolve.”

“None of us thought this law would be brought to the Parliament this year as we don’t even have a real government at the moment and were incredibly surprised at this insane rush.”

Atakan feels as though the government broke all records with its rush from publishing the final draft to getting measures rushed through parliament. What could have been the motivation for such haste?

Special interest groups and “friendlies” within Government offices had become aware that results from national surveys were going to be published shortly before the vote.

“Had the FCTC not been deliberately mistranslated to target and get rid of the snus issue in 2004, this law would never have been possible, totally unthinkable. In fact, had we had a correct translation of the FCTC it is more than likely that we would be eons ahead globally in terms of THR,” explained Atakan.

“It wouldn’t have surprised me one iota if we had had Bloomberg on our side, putting his money to excellent use where he would get the most health per buck spent, instead of spending money to build virtual anti-aircraft batteries against new ideas and honest science (more honest anyway) as the STOP initiative is now being used.”

“We definitely had the data to prove it, we just refused to do that and this is just another example of this sad national mass-psychosis in public health and politics.”

Atakan sent us a representation of the difference between the FCTC original and the Swedish version of it when translated back to English (below). “We lost a full 33% of the available tools to combat disease in the treaty, we lost harm reduction. We very much especially lost harm reduction, when in any way in the form of a tobacco or similar product, therefore the urgency of declaring vaping tobacco use. Words matter.”

The voting passed most of the proposals for tobacco and new nicotine products, with some important exceptions for snus. “My analysis,” says Atakan, “is that the exceptions to snus will be portrayed internationally not as a measure to ease or signify any preferential treatment of snus, but instead communicated that it is treated differently by necessity, that we had to cave in as this reflects our cultural oddities and the facts on the ground and industry influence.”

So, what of the survey data? 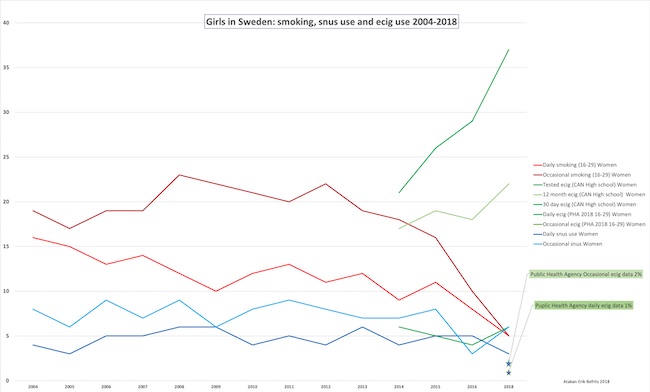 “We had been pushing as hard as humanly possible to delay or change the outcome – as we had a feeling what the results would look like. The data on Tobacco use and e-cig by the PHA were in two separate datasets not possible to run dually. The Central Association of Alcohol and Narcotics information released a third e-cig data set separately from the other two, covering a longer period going back to 2014. The data together represents the largest samples in Sweden that are used for this kind of data collection and the Public Health Agency data sample doubled in size since the last survey in 2016 – so it should be of better quality than anything before it.”

Swedish media was filled with articles stating there was an e-cig epidemic among its youth and snus use was not decreasing at the desired rates. Government ministers neither released graphs to support such claims, nor did they brief journalists with contextualized data interpretations.

“70% increase in ‘ever tried’ for e-cig in youth without any question must immediately support flavor bans and including e-cig in smoke free environment laws. You all get the picture. Predictable results in Parliament.” 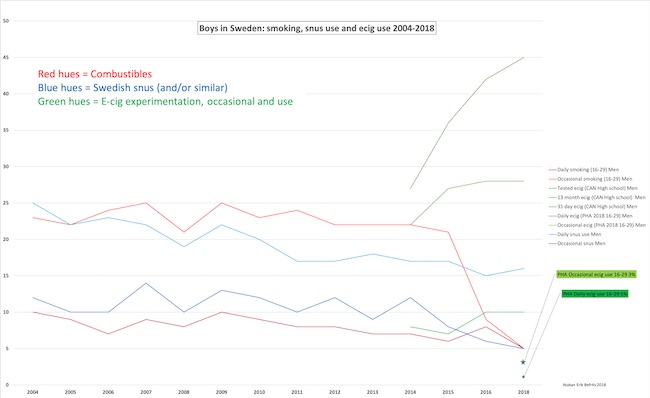 Atakan sifted the data to produce the two graphs on the actual situation for 16-29yr-olds, with extra e-cig information on high school students.

“I am pretty confident that with these two graphs made by the Government and communicated properly, considerably more politicians would have had an impossibly hard time justifying the far reaching anti THR legislations, like the one we got yesterday. Most of the data has of course been available, at least internally in government, for weeks or in some cases months.”

Acknowledging that he isn’t a professional statistician, Atakan states: “it certainly looks to me like the mere experimentation with other products (the more the merrier….) takes attention away from experimenting with and becoming a habitual daily smoker.”

Planet of the Vapes would like to extend its gratitude to Atakan Befrits, and its best wishes for New Nicotine Alliance Sweden’s on-going battle with the Swedish government.