Vaping is now the number one quit smoking method in Wales according to the latest data published by Welsh government. Twice as many smokers in the principality chose to use electronic cigarettes to switch away from tobacco than those who opted for traditional nicotine replacement products like gum or patches.

The Welsh government says, “Tobacco is the leading single cause of premature death in Wales and a major contributor to health inequalities.” The Tobacco Control Action Plan for Wales set out a vision of a smoke-free society for Wales in 2012 and stated an aim of reducing adult smoking levels to 16% by 2020.

This optimistic target initially looked difficult to achieve due to opposition to vaping from Mark Drakeford, the Minister for Health and Social Services from 2013 to 2016, but he was defeated in his efforts to restrict vaping and his argument about a gateway effect was roundly debunked.

Latest figures show that vaping has helped to reduce the current level of smoking to 17% of the population. Further knocking Drakeford’s initial claims that vaping would encourage teens to smoker, the report notes: “Those aged 16-24 were most likely to have never smoked.” 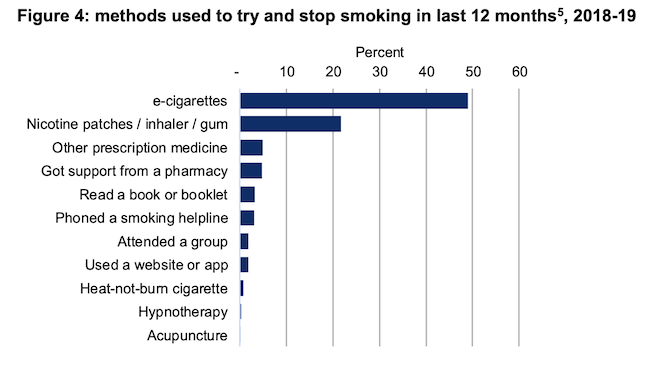 Rather than “renormalizing” smoking, just 1% of users had never smoked; 50% of e-cigarettes users were smokers, and 49% were ex-smokers.

Mark Drakeford has gone on to become the First Minister for Wales. He is yet to make comment on the latest figures.

Suzanne Cass of ASH Wales said: “Over 5,000 people in Wales are dying every year from a tobacco related illness and e-cigarettes are proving to be a vital weapon in our armoury against this deadly addiction.”

“Research has shown e-cigarettes are the most effective stop smoking tool available when combined with behavioural support. We would advise all smokers to seek help and quit in whichever way suits them best. The fact that so many Welsh smokers are switching from tobacco to vaping, proves just how popular this quit smoking tool is and what an opportunity there is to reach the remaining 30% of smokers that have yet to give it a try.”