A new study adds to the current wealth of evidence that there is no evidence to support the theory that vaping acts as a gateway into smoking. It was produced by Peter Lee and Katharine Coombs, of P.N.Lee Statistics and Computing Ltd., and Esther Afolalu, Philip Morris International. They concluded: “a true gateway effect in youths has not yet been demonstrated”.

The team conducted a literature search, identified a key systematic review and meta-analysis on the association between initial use of e-cigarettes and subsequent cigarette smoking among adolescents and young adults.

They note that many recent publications have made claims that there is an association between teens vaping and then starting to smoke. They write: “Concern that vaping may encourage subsequent smoking, the so-called ‘gateway’ effect, was fuelled by a recent paper by Soneji et al. (2017).”

Jessica Barrington-Trimis also worked on that 2017 paper and has been part of many poor quality anti-vape studies [link].

What they confirmed was that the following remain strong indicators of smoking initation:

They found that in a number of the studies claiming to demonstrate a gateway from vaping to smoking, many of the above “relevant factors were rarely considered”, leading to “bias in the estimated gateway effect due to failure to adjust for a relevant covariate”.

Looking at smoking rate records, they say: “These analyses, though clearly limited by the fact that we do not know what smoking prevalence would have been in the absence of e-cigarettes, do not suggest that introducing e-cigarettes has had any material adverse effect on smoking prevalence trends. If there were any gateway effect, it would be clearly outweighed by other issues, such as vaping providing an alternative to cigarettes for tobacco users, or changes in attitudes to smoking resulting from anti-tobacco prevention measures.” 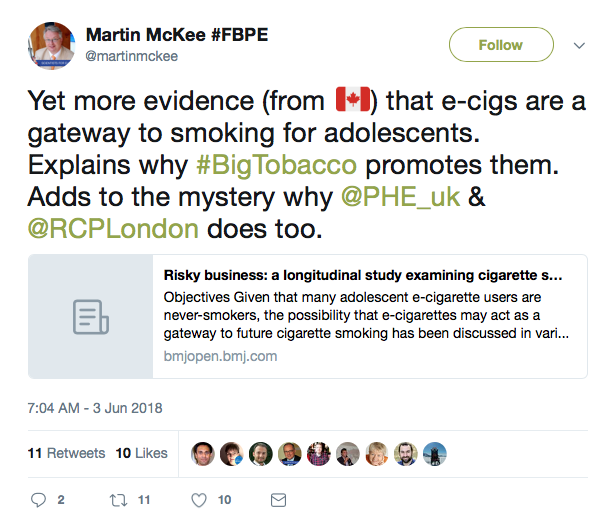 They highlight that the Soneji/Barrington-Trimis work produced an estimate “which may largely result from confounding”, and that a study involving Stanton Glantz “has since drawn strong criticism from experts in the field for being inaccurate and misleading”.

The team concludes: “The existence of any true gateway effect has not been clearly demonstrated, due to limited control for confounding factors. Even if there is an effect, and subsequently, some individuals who otherwise would not have done so start to smoke cigarettes, any effect on smoking prevalence will probably be quite small, and general considerations suggest that any overall population health impact of introducing e-cigarettes is still likely be beneficial.”

Photo by Masaaki Komori on Unsplash