Today we're taking a look at one of last years hottest items - the Dovpo Topside squonk mod - a collaboration between Dovpo and Brian from the “The Vapor Chronicles” (TVC) YouTube channel.

The Topside comes packaged in a nicely presented cardboard sleeve, inside this is the plastic box contains the mod which also doubles up as an atty stand once your finished unpacking. Besides the mod itself you'll find the usual selection of paperwork, some spare screws and Allen key for the squonk bottle system and a rather nice flat USB cable. There's also an 18650 battery adapter hidden inside the battery compartment and a spare squonk bottle is also supplied in a separate box. 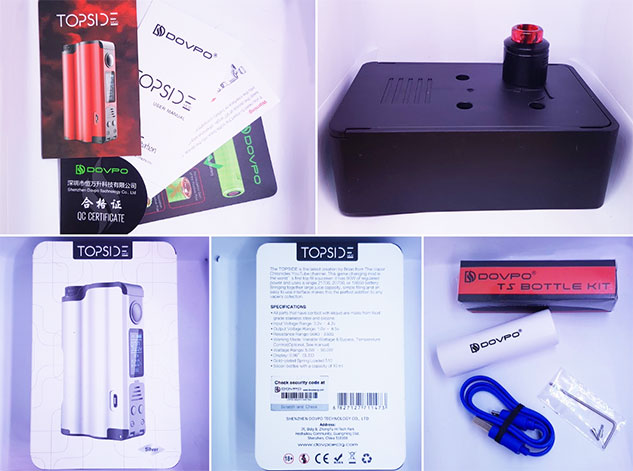 On the front of the mod The rounded fire button has a great clicky tactile feel to it and the rounded design is supposed to channel any eliquid from over squonking around the button to reduce the chances of liquid getting to the board. Under this there's a 0.96 inch OLED screen which is bright and clear even outside and the information you need is nicely laid out, then there's a grill which provides ventilation for the board. Finally at the bottom are the up/down buttons, these also have a nice tactile feel to them.

Wattage can be adjusted from 5 watts to 90 watts in 0.5 increments with the +/- buttons, pressing + and - together will lock/unlock the +/- adjustment but still allow you to fire the mod. 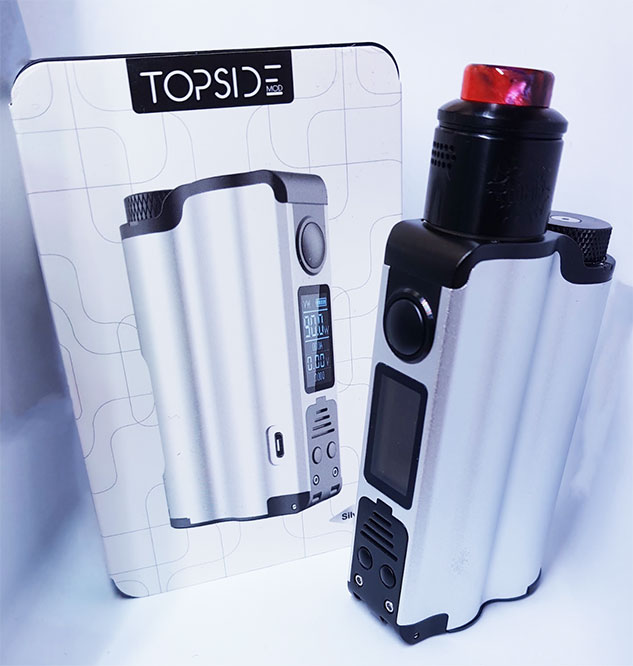 Out of the box only wattage and bypass modes are available, pressing - and fire will allow you to change between the two. For the vast majority of vapers this is all you need but if you want temperature control modes there's an optional firmware update on Dovpo's webpage using the USB port on the left side of the mod, I haven't felt the need to do this but full instruction video is also on the firmware page to help you if needed.

Onboard charging is also possible but as always use of an external charger is recommended.

The Topside has a rather distinctive style, it’s also fairly large and at 54mm wide I was concerned I might find it too bulky in use but thanks to the rounded portion where the squonk bottle is located I needn't have worried and I've found it to be quite comfortable in use. 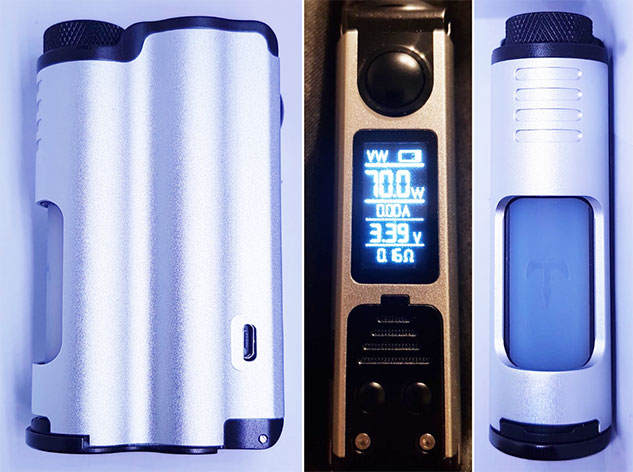 It should be noted that it's also on the heavy side being constructed from a mix of zinc, aluminum and stainless steel alloys, this thing feels solidly constructed but if you don't like heavy mods then this might not be for you.

The battery compartment and squonk bottle can be accessed from below. This is hinged on one side and there's a little play on the hinge when open but it feels nice and secure once it's shut. The battery terminal is clearly marked with a white minus sign, so negative side down. I found it a little difficult to shut the battery compartment on my first few tries, especially with larger batteries but I soon got the hang of it and there have been no issues with it coming undone whilst in various pockets. There's been  no battery rattle with 20700 batteries I've tried and all my 21700 batteries have fit, including some oversized Vapcell 21700’s which I've had issues with in some other mods.

The squonk bottle carrier system is also accessed from the bottom should you need to give things a clean, this is securely held in place even with the battery door open so there should be no worries about this falling out and eliquid going everywhere whilst you swap batteries. I did find that I got some eliquid build up around the carrier system but this was after several days of near continuous use, and possibly some overfilling on my part, so I'd recommend occasionally removing the carrier to check for this and giving things a wipe down as needed. The squonk bottle can be removed from the carrier by undoing the two small screws on top and the supplied spare bottle comes with a press fit lid should you want to carry a spare bottle around. 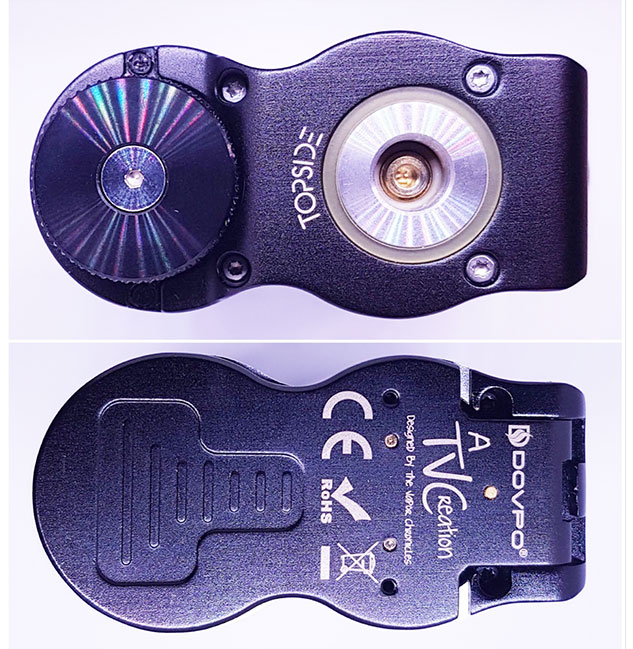 On top there's a nicely spring loaded 510 platform and I've had no issues fitting any of my rda’s on there. Then there's the major selling point of the Topside, namely the cap for the top fill squonk bottle.

Removing the cap reveals two generous fill ports similar to those you'd find in a tank, filling the bottle is an absolute breeze and the 10ml capacity means you won't need to be filling up every five minutes either.

The cap is magnetized and your supposed to be able to attach it to the bottom of the mod as pictured whilst filling but I found that the cap would frequently fall off when I tried this so I gave up on the idea after a few attempts.

On my first few goes screwing the top cap back down everything felt very graunchy and I was worried that I'd wind up cross threading it. Eventually I realized that the best way to do things was to put the cap in place then press down to seat the rubber grommets that plug the fill ports in place, the cap then screws back down much more easily although it does still feel a little rough at times.

The squonk bottle itself offers a really nice resistance and has a nice positive action quickly pulling back any excess eliquid. All the components in the squonk system are made from food grade silicone or stainless steel.

The top fill system is easily the best squonk refill system to date and whilst I would ordinarily avoid taking a squonker to work because of the mess and hassle of refilling this has been to work with me every day and makes squonking on the go an absolute pleasure. After using this kit extensively for the last couple of weeks I can heartily give it a two thumbs up, if you've been on the fence about the Topside so far then its most definitely worth your while taking another look.

Thanks to the team at Dovpo for sending this item in for review!  We have a review of the Nickel and Topside Dual coming out over the next few days as well so keep a look out for those.  The lovely Dovpo people sent us two of each mod as well so we are giving one of each away in a competition as well - first prize is a Topside Dual, second prize a Topside Single and third prize the Nickel 230W!  Competition link coming any sec :D 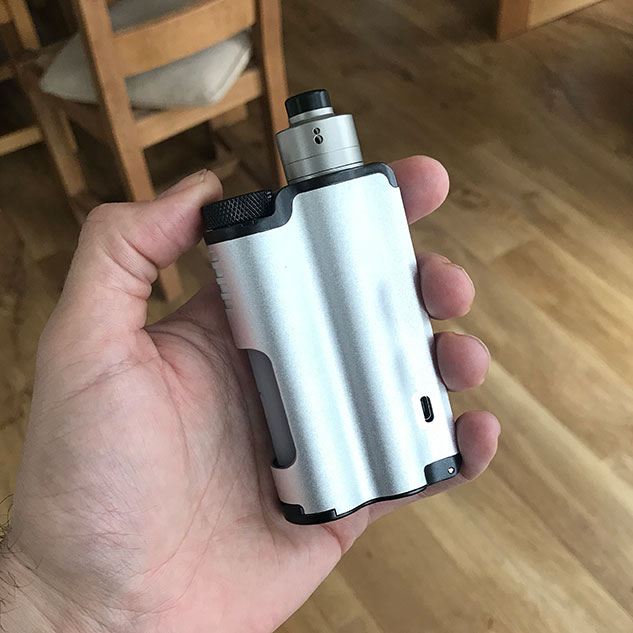