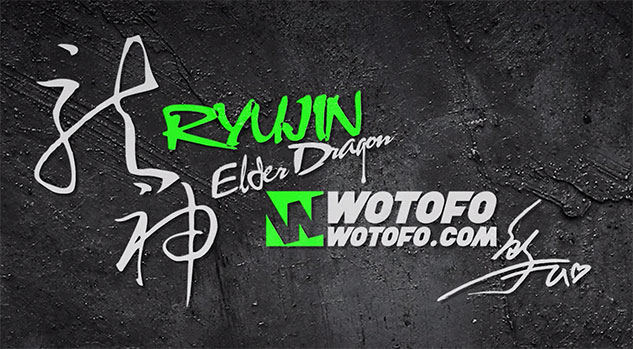 The Elder Dragon is made by Wotofo, famous for other atomisers such as the Profile, Recurve and Serpent though this time they have collaborated with a Chinese Reviewer called Ryusei Sakaue for the Elder Dragon. This isn’t Wotofo’s first collaboration having in the past released a Serpent rebuildable tank with SMM (Suck My Mod) which was a fantastically good tank. Does the Elder Dragon follow this path?

It’s a 22mm postless squonk atomiser/dripper that utilises a single coil layout. The Elder Dragon comes with a squonk 510 pin fitted as standard but has a solid pin in the packaging that can be used for dripping, if that is more your thing.

Within the box you will find: 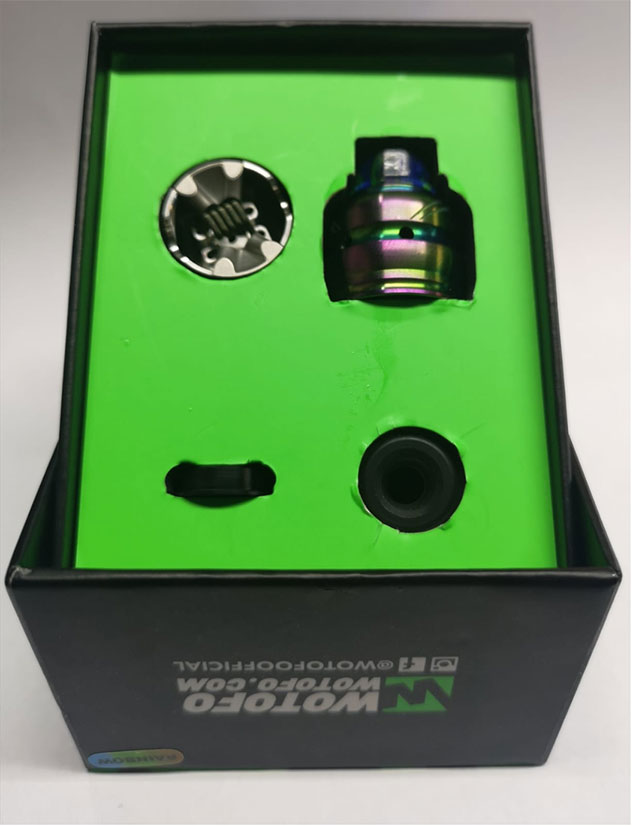 Onto the actual unboxing and some opinions. The design is certainly bold! Wotofo could be accused of making the Profile and Recurve rather safe design choices but certainly not the Elder Dragon. It’s curvy with lots of detailed and well worked machining, this does however mean it’s 22mm at the base but bows out to 24mm at its widest point.

There is a little too much going on for me and it almost seems over designed as if the designer didn't quite know when to stop! For the review I was sent the Rainbow version, which is one of 6 colours available, and I'm sure it would look less fussy in a more neutral colour, as all the Rainbow does is emphasise every curve and groove of which there are many. One other thing I noticed fairly quickly is that myself and many other squonk users use beauty rings - a plastic ring that sits over the bottom of the atomiser - this prevents scratches to your mod or base of the atomiser. Due to the design of the Elder Dragon, you cannot use a beauty ring as it just won't fit. 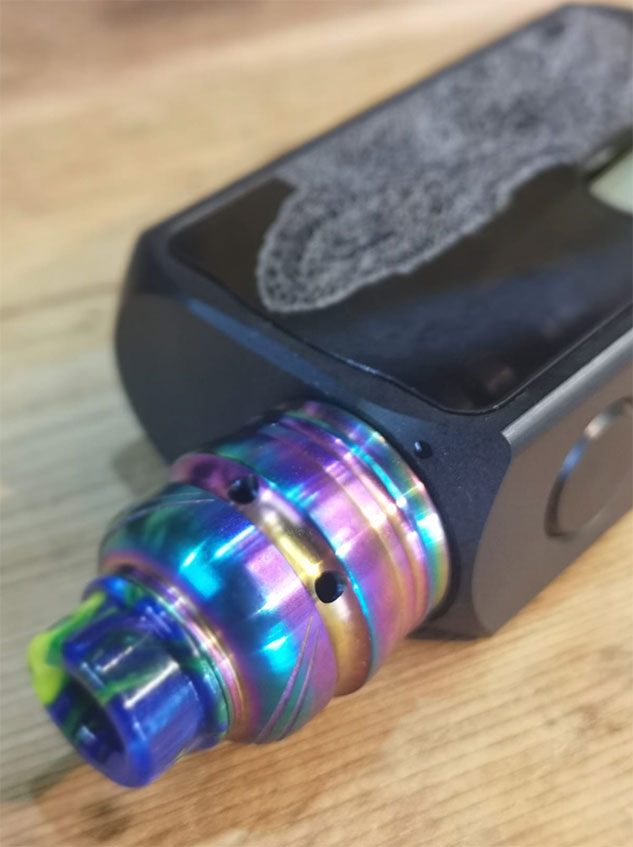 Now it's time to look at the deck and get it built. The deck is very well made with smooth machining and lovely detail. The juice well is very deep due to the postless deck having the screws located fairly low meaning the coils need a minimum leg length of 4mm - time to break out the included plastic gauge! The airflow is provided by four angled tubes leading directly onto the coil which sit fairly close, so realistically a 3.5mm diameter coil is the biggest you will fit, otherwise it will be touching the airflow tubes.

Building on the Elder Dragon deck is an absolute breeze and it is perfect for those looking for their first squonking atomiser or first postless atomiser. The holes for the coil legs are vast once you loosen off the screws and the holes are deep enough that the legs won't decide to pop out as you are screwing them down. Anyone who has owned a postless deck before will know the rage this can induce! I started with the included Tri-Core 0.17 Fused Claptons with 4mm leg length and took me the grand total of 20 seconds to fit, simple! Wicking is also an absolute joy and is incredibly forgiving. I'd recommend trimming the wick about 7mm past the edge of the deck, giving it a good fluff then just slotting into the juice wells. Cotton Bacon works perfectly for this job. The wick is kept well away from the airflow and causes no obstruction. It's an absolute dream to build on and one of the easiest I've used in many years. 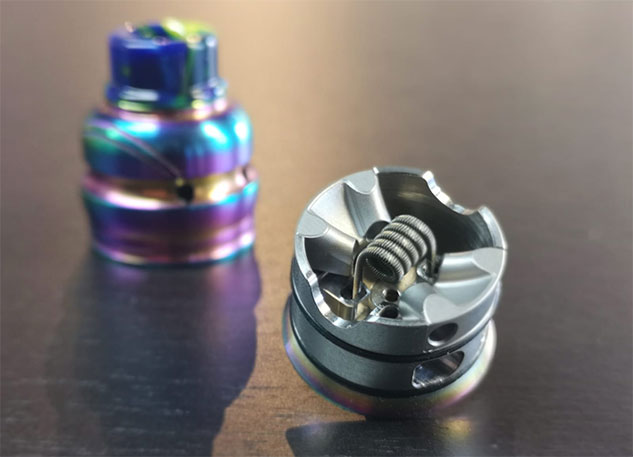 Onto the important part now, actually vaping on the Elder Dragon, and I'm afraid this is where we hit issues. The airflow is a quad setup and is simply too much for a single coil atomiser. I attempted to close the airflow down to two tubes only, but it won't allow that. You can restrict all four tubes slightly but not close off individual tubes so the best you can get is four airflow tubes half open, which is better, but it creates another issue - noise. It's like vaping next to a turbine fan! It's fairly loud with wide open airflow and closing that down just makes the situation worse, it's certainly not an atomiser to use whilst watching a film - as Mrs Chris K pointed out to me... The only solution is to keep the coil resistance low and use more wattage to account for the huge amounts of airflow but that begs the question, why not just use a dual coil atomiser instead?

Another minor irritating discovery was an issue with the airflow whilst squonking. Making the coil leg holes so large means when you press your squonk bottle, the juice can't escape into the wells fast enough meaning liquid comes up the side of the coil and into the airflow tubes. This caused juice to leak from the airflow once and also a very noisy first vape just after squeezing the squonk bottle. The angled airflow helps to avoid these issues but certainly doesn't solve the problem that really shouldn't exist to begin with. 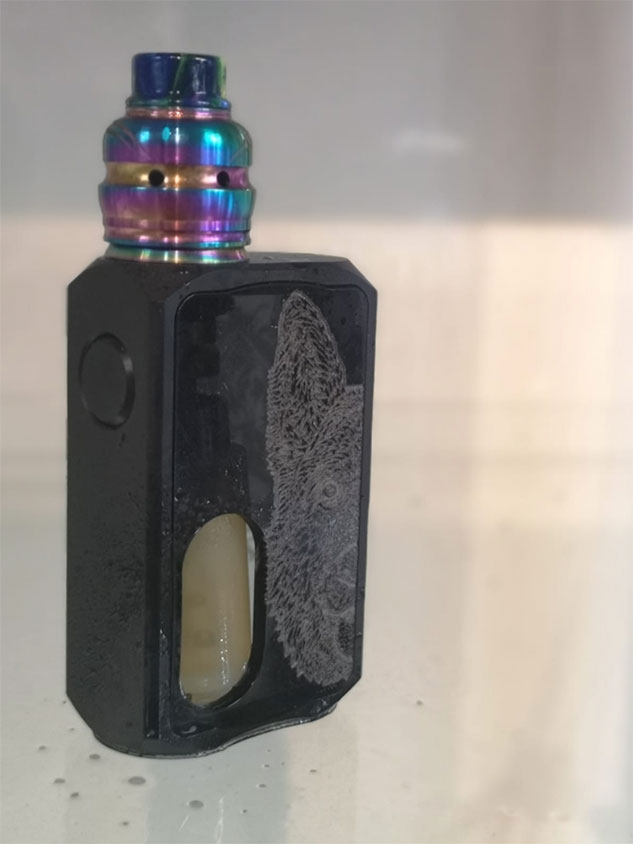 In summary, the Elder Dragon sports a bold design which will certainly get attention and it is one of the easiest, most forgiving, Rebuildable Atomisers I’ve ever come across to build on. It caters for a cross section of vapers who want open and airy but with a single coil atomiser. Unfortunately, this also creates its biggest weakness as the best single coil atomisers are generally more restricted airflow or have a more restricted option. The Elder Dragon is trying to be all things to all vapers but due to this ends up in a no man's land between everyone.

If you want a nice, simple atomiser that produces reasonable flavour and plenty of clouds at a high wattage, this is a good choice for you. But it does bring us back to an earlier question - if that’s what you want, would a dual coil atomiser do that job a lot better? 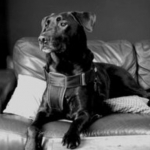 Article by Chris K
I'm a 33 year old Vaper who started vaping back in the 2010 when the choice of vaping devices was extremely limited. The changes that I have seen in the vaping industry since then has been amazing. I managed to go from 20 cigarettes a day to zero overnight purely due to vaping on poor devices - so anyone can do it with the great technology we have today!