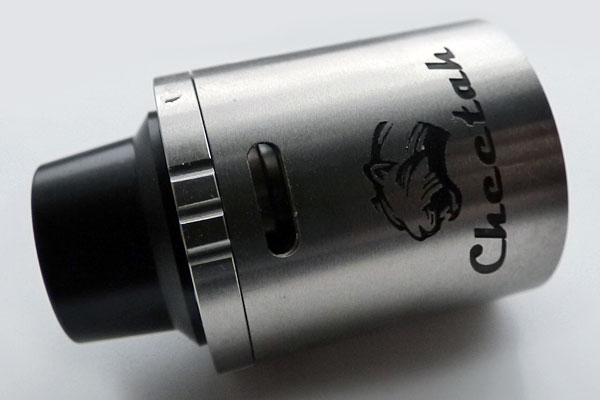 The Cheetah RDA by OBS is a 22mm dual coil RDA which features fully adjustable top airflow to help reduce the chance of leaking. In addition it features an innovative locking system which prevents the main barrel from spinning when adjusting the airflow. Using the popular Velocity style post arrangement the Cheetah is very straightforward to build. It all sounds very appealing so let’s dive into the review and see exactly what this RDA has to offer!

The Cheetah RDA is 22mm in diameter and constructed from 304 Stainless Steel. The overall machining is excellent especially when you factor in this atomizers very low price and all of the individual pieces fitted together extremely well!

On each side of the main barrel there is a logo. One side displays the name “Cheetah” and has a stylised Cheetah head and the other side features the OBS logo. This RDA consists of four pieces; the deck, the main barrel, the top cap and a black PCM drip tip. The drip tip is of a wide bore design, it is nicely tapered and comfortable to use. It features double O-rings to keep it very well secured in place but this does tend to make it a little awkward to remove at times. If you would prefer to use your own drip tips you can make use of the included 510 adapter which is included in the box.

The deck uses the ever popular Velocity style two post arrangement. The holes are reasonably large and should accommodate most typical builds. I found the grub screws to be decent and they secured the wire well without cutting it. One bonus was that the included hex screwdriver was really nice to use so I didn’t have to go hunting for an appropriate Allen Key. The 510 pin is non-adjustable and I personally think it is made from brass but it could actually be gold-plated. 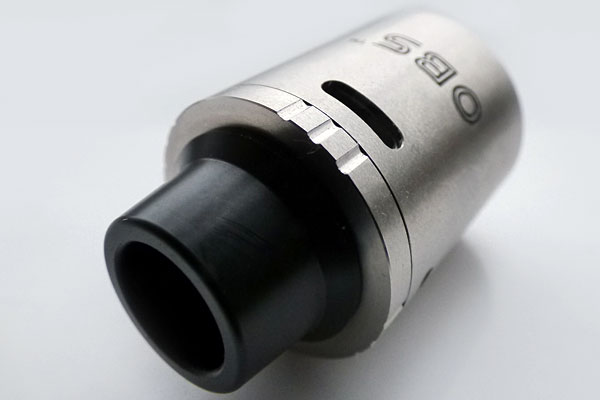 Upon first glance you might just assume that the airflow has only two slots vertically positioned above the coils but OBS have actually been a bit more innovative than that. If you examine the interior you can actually see that the barrel has a double lining and the airflow as well as being directed downward also splits off to one side to then travel down the outer interior lining before turning 90° to strike the coil.

With four fully adjustable airflow slots the Cheetah is definitely a lung hitting RDA when completely opened up and becomes a slightly more restrictive one as you close the airflow down. Due to the fact that there are four slots in my opinion the Cheetah is far too airy for mouth to lung users to enjoy.

When fully opened up the Cheetah’s airflow is a very noisy affair (direct lung inhales sound like gale force wind is blowing outside) and one slightly annoying thing about heavily closing down the airflow is that it does tend to whistle. 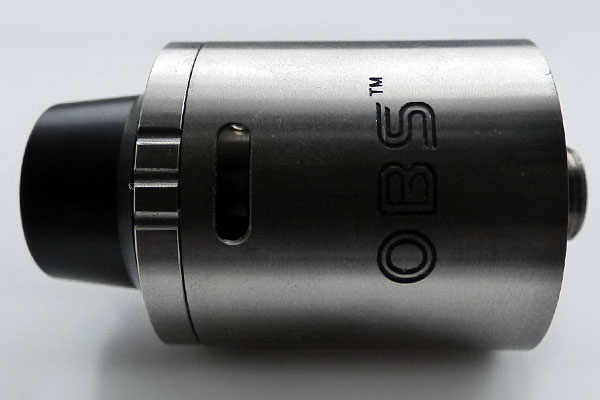 Anyone who has ever used a Velocity style deck before will feel right at home with the Cheetah and even a novice could get to grips with it in a short time providing they have some experience of building dual coils. Do take care when positioning the coils because if you have them too high they will end up touching the top cap and you will get a short.

To make sure your airflow is always centred with your coils the Cheetah using the same method as the OBS Engine and there are notches on the top cap that align with the base. This keeps the top cap from spinning when you adjust the airflow and it is a very useful feature. You will hear it click when you have it locked into place. Typically I line up the letter “B” from the “OBS” logo which works as a handy guide when aligning the notches. 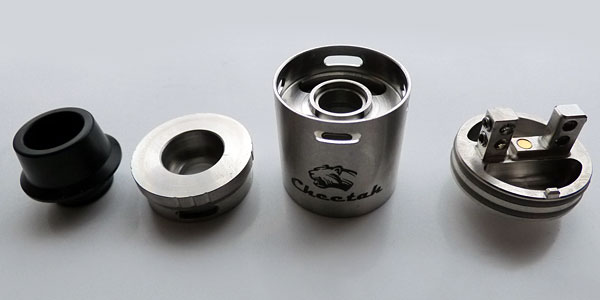 I went for a dual 3mm ID 26 gauge build which had a final Resistance of 0.5ohm and I wicked both coils with cotton bacon. I primed the coils and filled up the well with some Bunkr Apple Strudel. 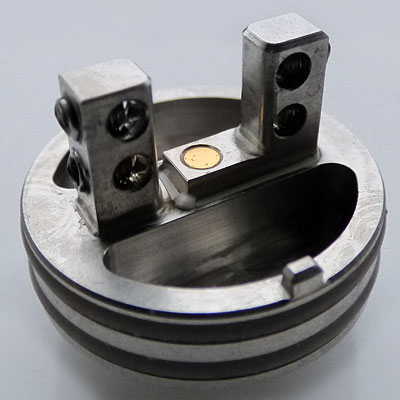 The draw while rather noisy felt very enjoyable but you do tend to get a bit of turbulence when vaping. As far as flavour goes I found this RDA to be above average. With the airflow positioned directly above the vapour rises directly into your mouth and this gives you a very clean taste and I could certainly pick out the different notes in the juice. While the Cheetah won’t give you the same kind of vape as a dedicated flavour chasing atomizer I still thought it was very good especially when you factor in this RDAs other attributes such as its leak resistant nature and the low price point.

I tried out a few different E-Liquids which included Colonel Boom’s Lt. Ripley, some VGOD Dewie, Manabush Powwow Sauce and some Knight’s Creed Honor and to be completely fair all of them were an enjoyable enough vape in the Cheetah. Even though this RDA is only 22mm in diameter the well is reasonably deep so I didn’t feel like I was constantly re-dripping.

Due to the top airflow the Cheetah does tend to be noticeably cooler to vape at high Wattage which will either be a blessing or a curse depending on your personal preference. With my current build I only noticed it getting slightly warm when I increased the Wattage to 40W and at this point I was approaching 6.0 Volts. Continuing experimenting I increased the Wattage to 70W (7.50V at this point) and to be honest it felt like I was vaping at a much lower Wattage like 30 Watts. I then finally pushed up to 95W which with this build was quite frankly ridiculous but even though it was warm it certainly wasn’t what I would call a hot vape.

Of course this might be very desirable if you happen to like building your RDA’s with dual Fused Clapton Coils and really cranking up the Wattage but you don’t want things to get too hot.  Personally for me the Cheetah is a very different experience since I am used to a lot of heat at 80W+ using either my Goon, Kennedy Trickster or Apocalypse Gen 2 and that is something I really tend to like about that kind of vape but we don’t all have the same tastes.

The Cheetah’s vapour production is respectable and will probably be very acceptable to typical users but it certainly is not a massive cloud chasing RDA by any means. 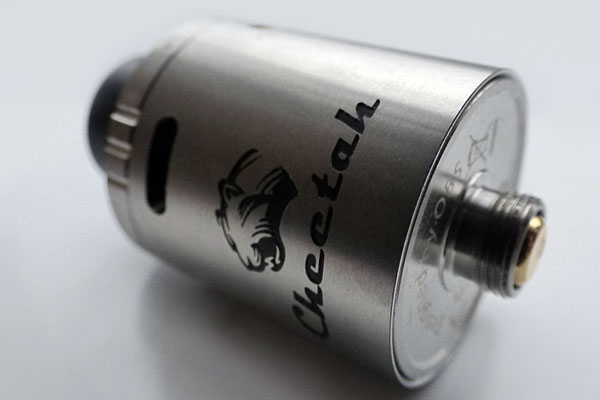 The Cheetah is an excellent budget top airflow RDA that offers above average flavour and good vapour production. While it is dual coil only it is thankfully straightforward for rebuildable newcomers due to it featuring the very simple to use and highly popular Velocity posts. The overall machining is of a very good quality especially when you consider the reasonable price this RDA is sold at. One major advantage of the Cheetah is that it is very leak resistant (it will still leak if you turn it upside down) so will probably be ideal if you are someone who tends to over drip and since you can close the airflow down entirely it might make a very good RDA for when you are out and about!

Take note that the Cheetah does tend to be a much cooler vape than other RDA’s you may be used to so if you like a lot of heat this probably won’t suit you another potential negative is that the airflow can be very noisy. Nevertheless if you are thinking of getting into dual coil RDA’s or you are simply after something that is far less prone to leaking then the Cheetah is certainly a very worthwhile choice! 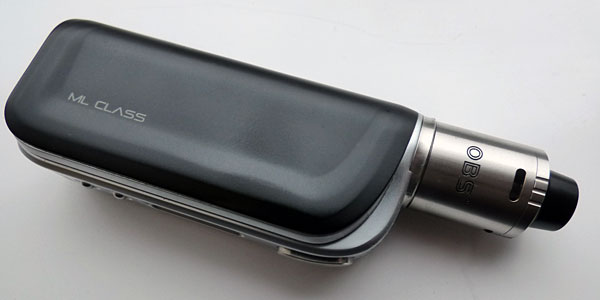