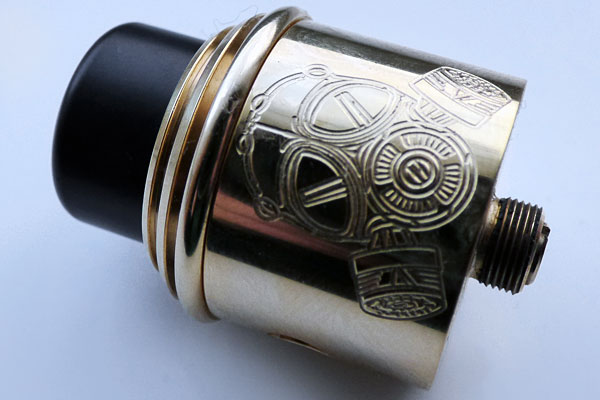 The Apocalypse Generation 2 is a 24mm dual coil only RDA designed and manufactured entirely in the United States by Armageddon MFG who are based in Southern Florida. This RDA features a clamp design for simple coil installation.

Featuring a fully adjustable teardrop airflow design which when fully opened has two 5mm diameter air holes the Apocalypse offers massive cloud production. It has been excessively hyped by many as the “Goon Killer” and is apparently marketed as such.  We all know that hype is often misplaced so let’s have a good look at the Apocalypse to see if any of it is justified!

You don’t actually get a box with this particular RDA and it comes in a black velvet embroidered drawstring bag that is very similar to the Goon’s.

Upon taking the RDA out of the bag I was very impressed with the styling of the Apocalypse because it is extremely attractive. The fully gold-plated version I purchased looks absolutely gorgeous and is probably just the thing for anyone who wants more shiny stuff in their lives! The machining is excellent throughout and everything fits together beautifully. Due to this RDA being 24mm in diameter you will need an appropriately sized device so you don’t get any overhang. The 510 as you might expect given the amount of overall bling on offer here is also gold-plated. Each Apocalypse RDA has a serial number which you will find engraved on the base, I have “1073”.

The Apocalypse is available in several finishes with the heat treated one being especially unique and attractive. Now while all of them feature entirely gold-plated decks (including the well and posts) not all of the top caps are made from Stainless Steel. For example the Cotton Candy one and the other full colour versions have an aluminium top cap which is something as a con because there isn’t a great deal of difference in the price so do be aware of that if you are thinking of purchasing one. What is especially nice about this RDA is the very heavy engraving featuring a gasmask design on one side and the Apocalypse lettering on the opposite side which uses a kind of spiky Metallica font. 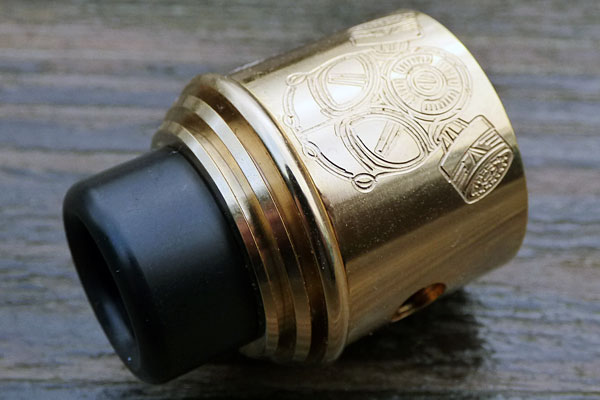 The Apocalypse consists of four parts which include the base/deck, the main barrel, the top cap which features the airflow adjustment and a black Delrin drip tip. The drip tip is quite large in diameter and nicely rounded so it feels very comfortable on your lips. It is held on by a single O-ring in the top cap and simply press fits but since it is an odd size it is unlikely you will have anything in your collection that you can replace it with.

While I do like the included drip tip I really am not impressed by the fact that Armageddon MFG claim that the Apocalypse can be fitted with any Kennedy or Goon drip tip which is highly inaccurate. For example I own a Kennedy Trickster 24mm and a black Goon 24mm and none of the drip tips actually fit the Apocalypse, neither does the black Goon’s chuff cap. Even Half Moon Mods drip tips which fit beautifully to my Goon and Kennedy also won’t fit the Apocalypse. Personally I don’t mind that no other tips fit but what actually annoys me is that Armageddon MFG still have misleading information on their website and this has the knock on effect of other vendors displaying exactly the same thing (not their fault since they just use the manufacturer’s information). For an American company this isn’t really good enough and they should make sure their facts are accurate. 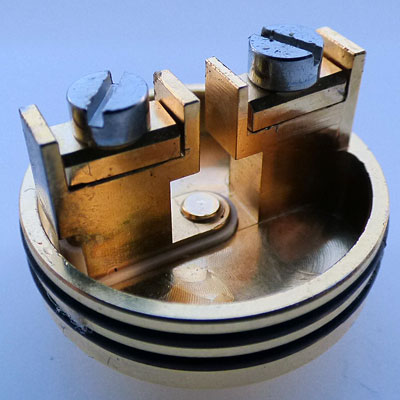 Moving on and taking a look at the deck you will notice that the Apocalypse borrows the clamp design from the Goon but instead of four screws there are only two very large Stainless Steel flathead screws which hold the wire extremely well and are certainly are not going to strip any time soon. With some clamp designs you sometimes have to flip the RDA upside down but that is not the case with the Apocalypse since the clamps feature a slight bevel so they do adjust as you push the wire through which makes building the Apocalypse very simple and a little quicker than the Goon (which isn’t exactly difficult either). There is plenty of room so you can pretty much fit whatever build you have in mind.

Now we get to my major gripe with the Apocalypse and that is the O-rings which secure the top cap are pretty poor. While they are perfectly fine when the RDA is completely dry the moment you get any juice on them the top cap comes away far too easily. For an American made RDA this is somewhat shoddy especially if you compare the O-rings to the ones on the Kennedy which have outstanding tolerances. It also compares badly with the Tokugawa and the Goon which also have superb O-rings and are both made in China. As you might expect I will be replacing the O-rings on the Apocalypse at the first opportunity.

One final thought is that even though the Apocalypse is nicely machined and fits together well it does feel lighter and thinner than the Kennedy or Goon and as such does have a slightly cheaper feel to it which is shame considering the high price it is sold at.

While the Apocalypse airflow unfortunately doesn’t cater to single coil users it is truly excellent. The unique teardrop design allows for a large amount of flexibility and you simply turn the top cap to suit your preference. As you might expect when fully opened up it is a very airy direct lung inhale draw but surprisingly you can close it down to just a tiny hole on either side which actually does give you a very enjoyable mouth to lung vape! 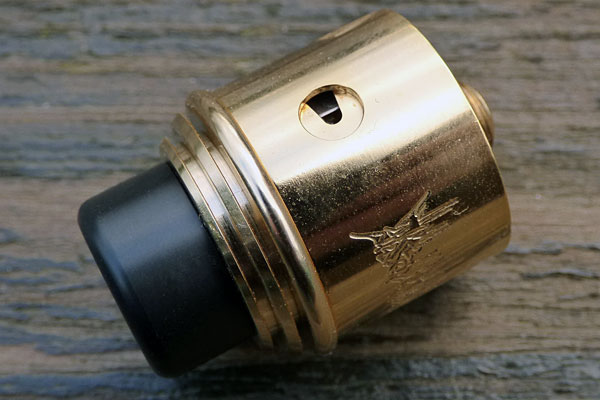 As I have already mentioned you have loads of room for your builds and the clamp system works extremely well. I would go so far to say that due to how easy this RDA is to build it would even be suitable for rebuildable newcomers providing they have some experience of dual coil builds. 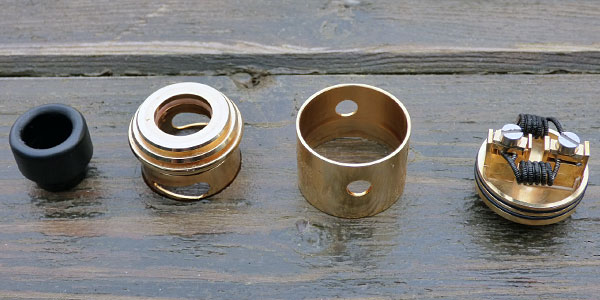 I built the Apocalypse with dual Clapton coils that had a final resistance of 0.28ohm. I then wicked the coils with cotton bacon and then primed them and filled up the well with Bunkr Apple Strudel. I typically vaped this build at 75-85 Watts but I did push up to 100W on a couple of occasions. 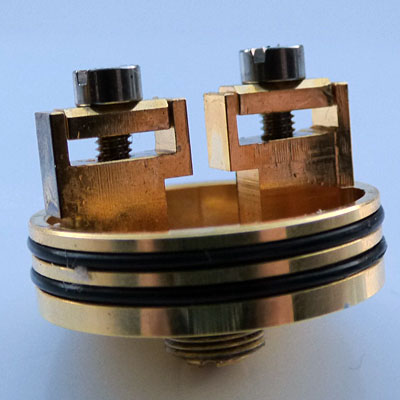 For anyone wondering I do have a very similar build in my Goon so it was pretty easy for me to compare the flavour between both RDA’s and I have to say that I do feel that the Apocalypse offers slightly better flavour and I attribute this to the gold-plated well which means your juice never has any hint of a metallic taste and is very crisp and tasty. Of course depending on your taste-buds you mileage may vary somewhat.

What I did find remarkable after trying a few different juices in the Apocalypse which included such delights as Manabush Wenebojo, Fallstreak Cirrus and Colonel Boom’s Lt. Ripley is that the flavour never really diminishes even when vaping with the airflow fully opened up. Closing the airflow down heavily which is not recommended with the type of build and Wattage I was using does actually yield a little more flavour.

It is of course quite difficult to say how much better the flavour is on the Apocalypse when compared to the Goon and it will vary heavily due to personal taste. I could say that I felt it was perhaps 10-20% better but this is a highly subjective area and there are many factors which can vary this result such as the build, wicking material and of course the juice. For some folks it might only seem like 5% better and if that is the case then it might not be a significant enough improvement to make purchasing the Apocalypse worthwhile. As far as flavour goes I think it is probably best and safest to say that if you enjoy the flavour on the Goon then you will be happy with the Apocalypse!

As far as vapour production goes the Apocalypse certainly puts out some huge plumes due to those two large 5mm diameter air holes and you do get some very dense clouds but the Goon still puts out loads of vapour which is almost as thick. Once again it will all depend greatly on your build, your juice and the Wattage you choose to vape at but I think you will be more than satisfied with it!

One plus point of the Apocalypse is that due to the top cap being stepped (works as heat sink fins) it is noticeably cooler at high Wattage than my Goon and often vaping at 100 Watts felt more like 80-85 Watts. 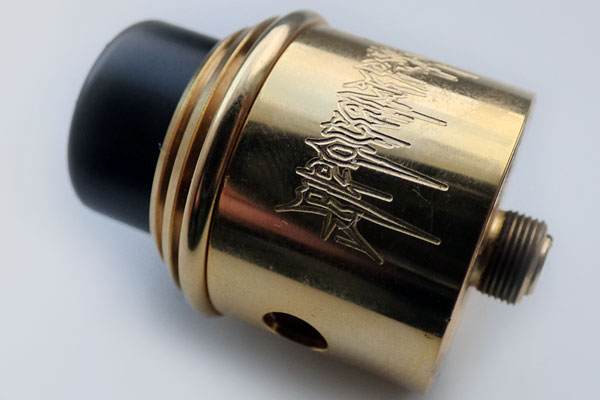 If you are a fan of the Goon and providing you typically make dual coil builds I see absolutely no reason why you wouldn’t enjoy the Apocalypse. This RDA offers a large building area and tons of space between those huge clamps for whatever build you have in mind. Due to the fact that there are only two large screws as opposed to four medium sized ones on the Goon building it is slightly faster and a little more convenient.

Unfortunately the Apocalypse does have some cons. Firstly it only caters to dual coil builds and secondly for a product that is made in the United States the O-rings are dreadful. Of course you could also factor in a third con due to the fact that the manufacturer claims that the Goon/Kennedy drip tips fit the Apocalypse which is untrue and very misleading. Another potential con is the price since some variants of the Apocalypse practically cost as much as the Kennedy and I will tell you right now that for the type of vape that I personally like I feel that the Kennedy is a far better choice (excellent O-rings too).

Now all these cons might give you the idea that I don’t like the Apocalypse but that would be completely untrue because I think it is a great Goon style RDA that has very nice flavour and superb cloud production! I do prefer the clamps on this RDA to the Goon and I really love the Apocalypse’s teardrop airflow which offers a large amount of flexibility.

In my opinion the Apocalypse is a very enjoyable RDA but it is certainly not a “Goon Killer” even though the flavour is noticeably better because it falls short in other important areas, such as the O-rings, the lack of a single coil build option and the fact that you are pretty much stuck with the standard drip tip. As mentioned earlier the Goon also feels far more weighty and substantial with the real irony being that it is a much cheaper purchase.

Nevertheless the Apocalypse offers an excellent vape and is still a very worthwhile purchase despite its shortcomings and might actually be ideal (make sure you replace those O-rings) if you want something different to add to your collection!

The Apocalypse Gen 2 RDA is sold by a wide variety of UK vendors and the price does vary depending on the finish you choose. I got mine from Evolution Vaping and the quality of service was excellent.