The Electronic Cigarette Company has sent over the latest dual battery kit from Voopoo for us to take a look at, the Voopoo Musket. On the forum I’ve seen this being compared to the Double Barrel mod which was popular a couple of years ago so I was curious to see if this was going to be a timeless classic or if it’s a throwback to a bygone era as its name would suggest. 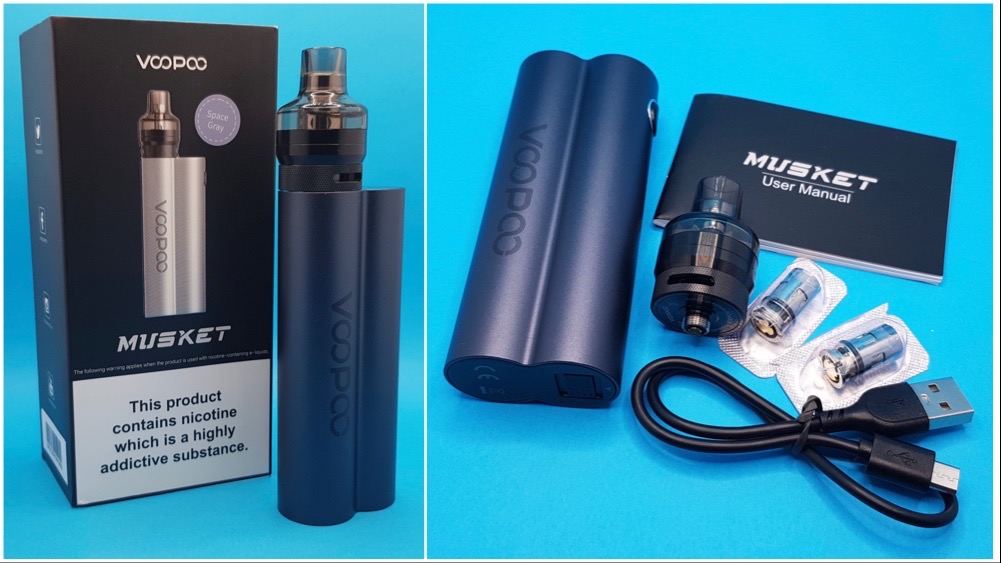 The Voopoo Musket is available in eight colours and I was sent the “Space Gray” version for review. The ever popular PnP Pod tank is included in the kit along with two PnP Coils. A brief user manual and a micro usb cable are also included. 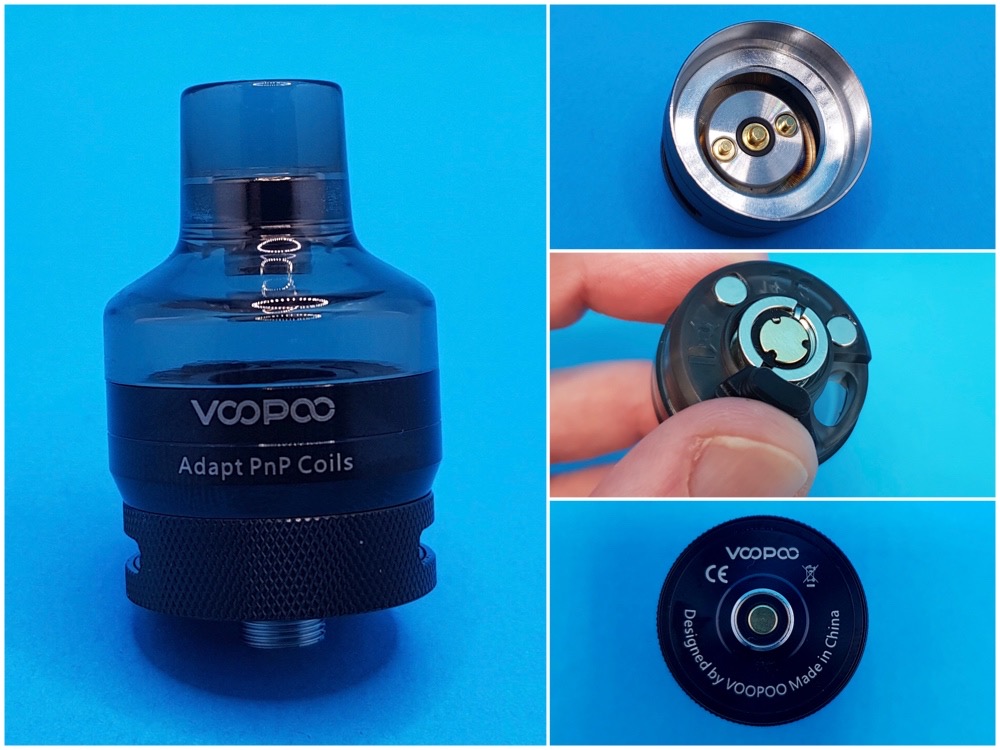 The main draw of the Voopoo Musket kit for me is the Musket mod itself, the included PnP Pod tank and PnP Coils have been covered many times before so I’ll just give a brief overview of that.

The PnP Pod tank consists of a standard 510 threaded base/airflow section with a PCTG pod held in place with magnets. In this TPD compliant edition you’re limited to just 2ml, but 4.5ml tanks are available for the global market. This can use the full range of PnP Coils coils and two are included in the kit, a 0.15ohm mesh and 0.2ohm mesh which are both aimed at the direct lung end of the user spectrum.

One minor issue I did encounter a couple of times was that my ohms would occasionally start to fluctuate, this was down to condensation build up under the pod and a quick mop up soon resumed normal service. Other than that, this has performed exactly as I would expect throughout and is great if you want the convenience of a pod system which you can use on your other standard 510 mods. 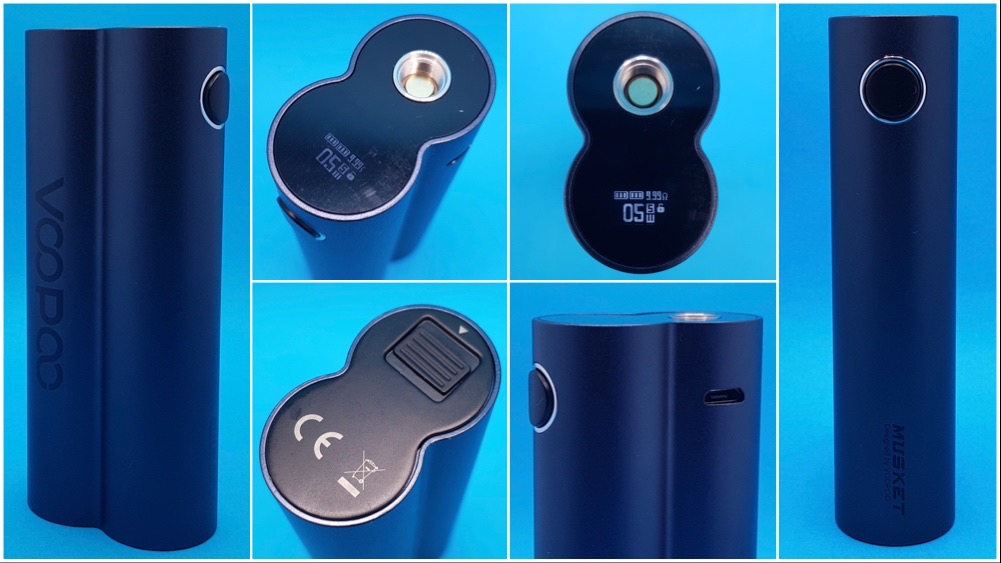 The Musket mod itself is an exercise in extreme minimalist design and is barely much bigger than two 21700 batteries held side by side. It is quite a bit taller than this though as, by necessity, all the electronics now have to sit above the battery compartment to achieve this small footprint. Curiously this has been put in with the Voopoo V-Series kits which have previously all been MTL kits, despite it being a 120 watt dual 18650 mod!

The main chassis is made from an aluminium alloy with a figure of eight design and just a single button with a silver accent ring on the front and a micro usb charge port on one side. The anodised exterior finish has a slightly sandblasted texture which means this isn’t too slippy in the hand and gives it a pleasant texture. For once in a Voopoo product, the branding isn’t too in your face either with a simple “Voopoo” logo on one side and a small “Musket” logo on the front spine of the device which on the space gray version supplied actually blends in quite well with the bluish gray finish.

On the top you’ll find a spring loaded 510 connection on one side with a concealed LCD display on the other. The 510 connector sits about 0.2mm above the top plate, which is also recessed about 0.1mm in from the top of the chassis. This has obviously been done to reduce the risk of the dreaded atty rash but does mean that you will encounter a visible gap between the mod and tank when looking from the side, this is hardly noticeable in day to day use though. I think it should go without saying at this point that anything over 24mm is going to overhang as well due to the overall dimensions of the Musket.

The top section is made from a darkly tinted plastic, however the screen is bright enough to shine through easily and is fairly easy to read despite the diminutive size. One option I would have liked to see here is the ability to flip the screen, as a habitual trigger firer the screen is upside down from my point of view but this is only a minor inconvenience. 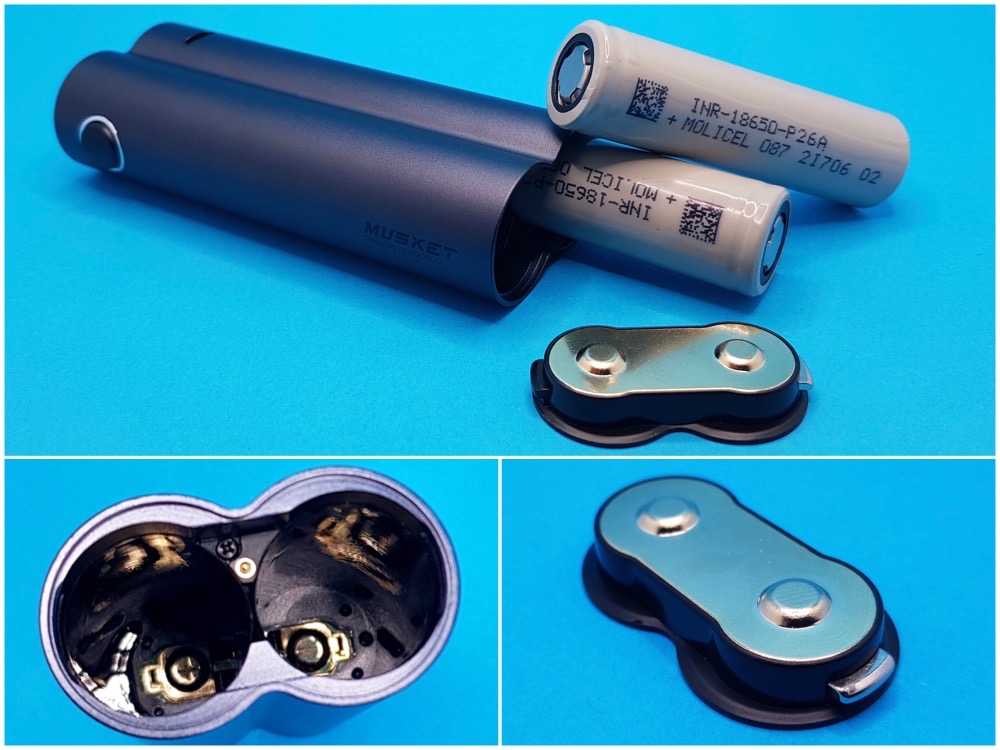 Batteries are loaded from the bottom. The whole battery cover is removed to access the battery tubes so be careful not to misplace it! The cover can be inserted in either direction and is held in place by a sturdy plastic clip on one end and a retractable metal clip on the other, I’ve only had this come loose once in the week and a half I’ve been using it and I suspect this was probably down to user error on my part by not ensuring it was properly locked in the chassis. Polarity is marked in the bottom of the battery tubes on the contacts, this is quite difficult to see and is one area that could have been improved.

On one side you’ll find a micro usb charge port, a strange choice and I’m sure many would prefer to see a usb-c port in its place. This promises 2 amp charging and in my tests it peaked at around 1.6 amps but would frequently drop back to zero for a few seconds which meant charging seemed rather on the slow side. This is one time where I think I would most definitely be more comfortable using an external charger!

As the Voopoo Musket only sports a single button, the usual menu controls obviously go out of the window on this occasion. I’ve found the single button menu navigation to be easy enough to learn and use though, possibly aided by the slightly stripped down wattage only operation with just “smart” and “RBA” modes available. Three clicks will allow you to alter your wattage, which will be limited according to your coil resistance in “smart” mode or give the full 120 watt range in “RBA” mode. Five clicks will bring up a second menu allowing you to lock the Musket, clear your puffs, turn the mod off, and change between “smart” and “rba” modes.

The board seems very responsive in use. When accessing the sub menu with five clicks, you’ll definitely end up firing your coil for example, and it has all the safety features you might expect. One aspect I did find slightly annoying from time to time is that it goes into a “deep sleep” mode after thirty minutes of inactivity requiring an extra press of the fire button to raise it from its slumber. I’m not sure if there’s any boost functionality here either, in fact I’m pretty sure there isn’t, but we’ll need to wait for one of the YouTube reviewers with oscilloscopes and the like to find out for sure.

I’ve been looking forward to trying the Voopoo Musket out since it was first teased online and it hasn’t disappointed me. I quickly got used to the single button operation and I love the bare bones aesthetic. It’s even garnered a few jealous looks at work as well with people commenting on how sleek it looks. However if you’re into larger atomizers (above 24mm) or regularly vape over 120 watts, then this may not be for you. The included PnP Pod tank is an added bonus and has performed well for me.

Many thanks to The Electronic Cigarette Company for sending the Voopoo Musket over for review. 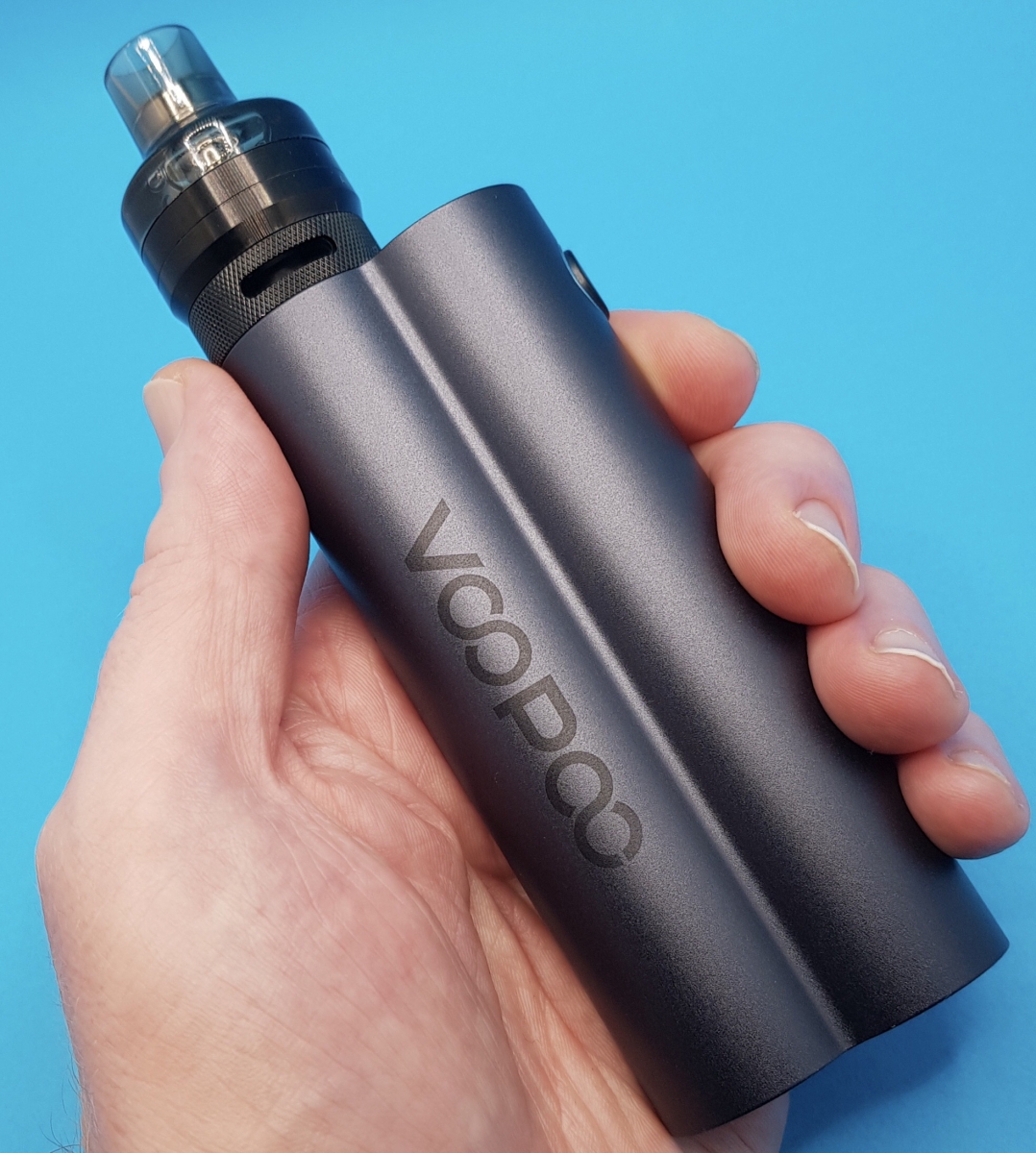