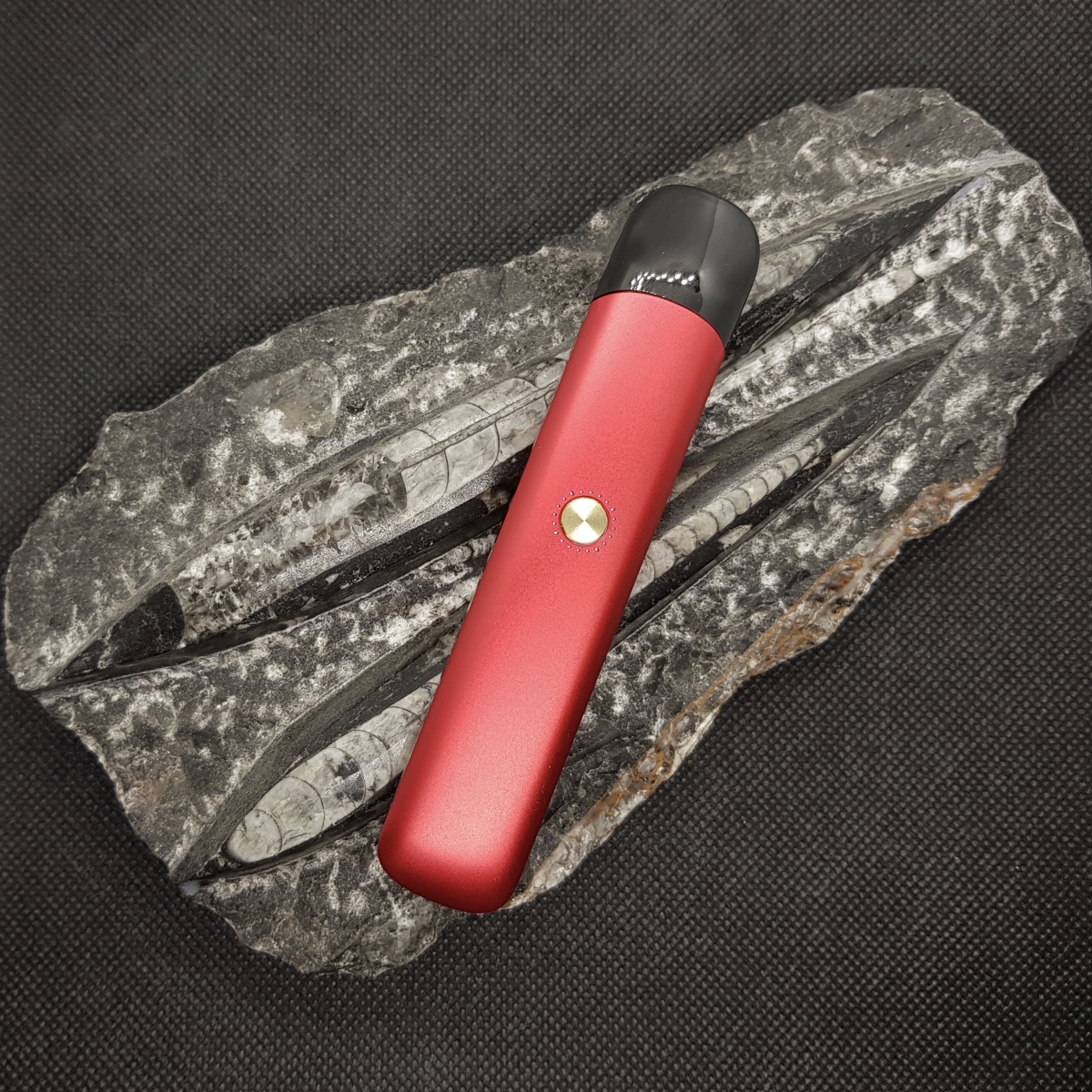 Vaptio have sent over their latest starter kit for review so today I’ll be taking a look at the Razor pod kit. This comes nicely packaged in a cardboard sleeve with a photo of the device on the front, package contents and colour choice on the back, and a scratch ‘n’ sniff authentication code on the side. Removing the outer sleeve reveals the Razor mod and underneath is a brief user guide, usb-c cable and two pods. 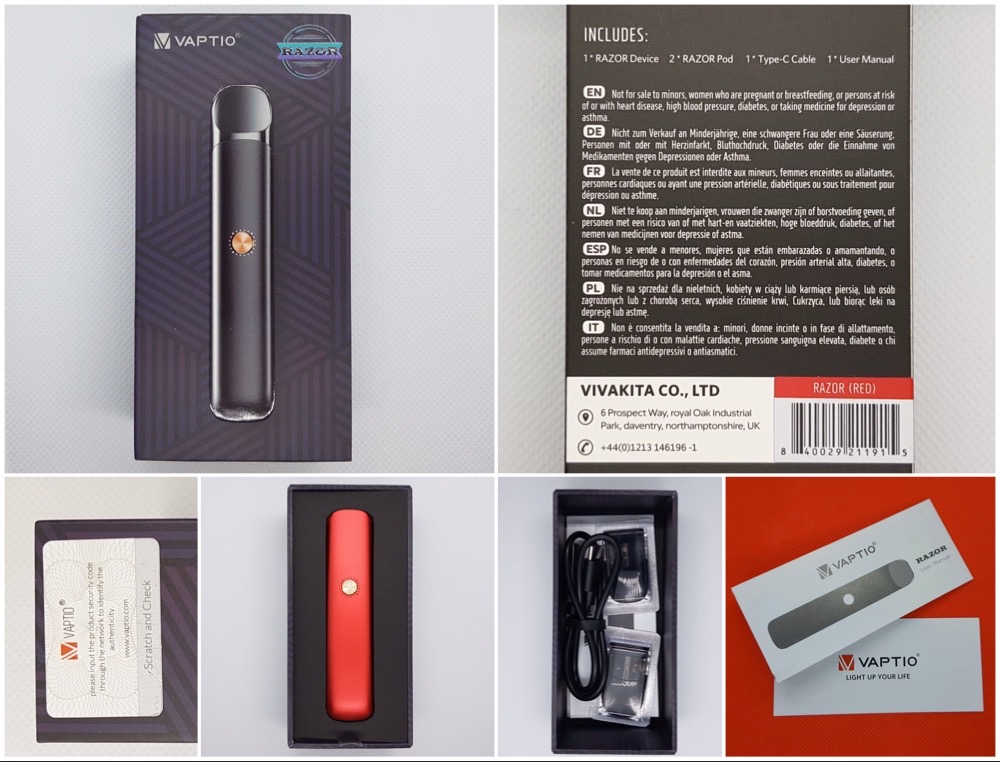 The Razor is available in red, green and black and, as you can see from the photos, I was sent a red kit for review. The main device itself feels solidly built, but isn’t too heavy in the hand, boasting a cold forged aluminum alloy chassis with anodized colour finish which looks stunning and has a great surface texture. I’m not quite as keen on the large Vaptio logo running down the back of the device though and would have preferred something a little more subtle to match the sleek looks present from the front. On the front of the device is a gold power/fire button which is surrounded by a ring of white leds, on each side are two small air intakes for the pod, and finally on the base is a USB-C charge port. 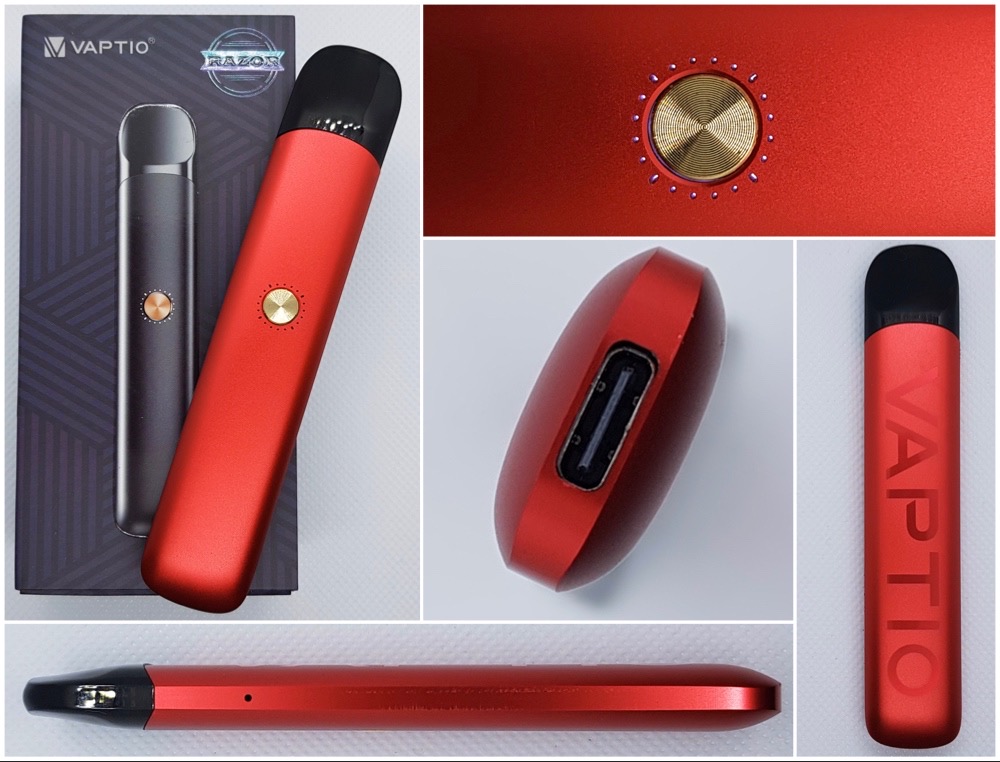 Two pods are included in the box which apparently employ a combination of non-woven fabric, linen and organic mesh cotton wicking material for “superior taste and massive vapors”. These appear to be a vertical coil due to the design, but there’s no mention of the actual coil type or material used other than the 0.8Ω resistance.

This is an open pod system, which means you can choose your own eliquids and refill the pods multiple times before they need to be replaced. The pods are made from a food grade PCTG material and have a TPD friendly 2ml capacity. Filling is easy, simply pull away the integrated drip tip to reveal two large fill holes (not the one in the middle, that’s the chimney!) which easily accommodate most eliquid bottles. The use of two fill holes means that air can escape from one side whilst you fill from the other. Even so, I did find that eliquid took a while to make its way around the coil so you may have to employ a little patience or swap from side to side whilst filling. On the underside are two small air inlets along with the contact points for the coil. 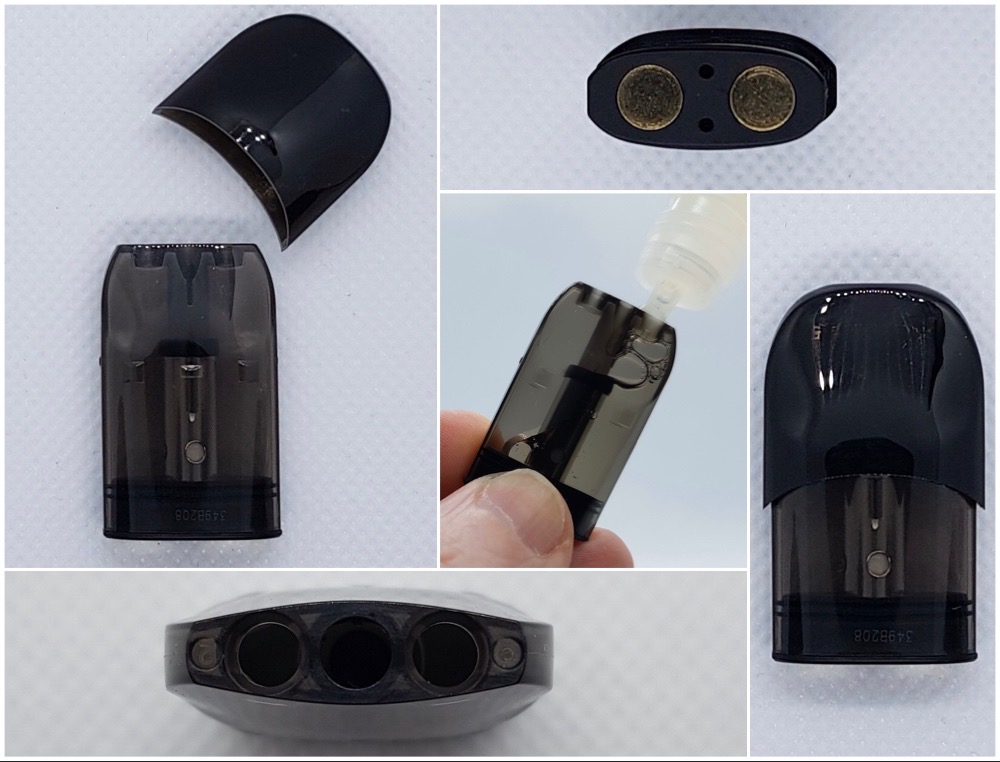 Operation is simple, press the button five times to turn the device on, then insert the pod into the top and you will receive a quick buzz from the integrated haptic feedback letting you know you’re ready to go. The pod is held in place with two fairly powerful magnets and this definitely passed the shake test with the pod stayed firmly in place. In fact, I was able to hold onto the pod and shake and the device still held in place.

The device works with either draw activation or by pressing the power button. I detected little difference between the two and wound up using the draw activation by preference. Flavour was initially a little lacking, but after a very short break in period, this really started to improve dramatically. It’s not rta quality by any means, but manages to hold its own against many of the competing pod systems on the market and definitely beats many basic starter kits, like the myblu, due to the vertical vs horizontal coil  arrangement. The draw itself is a fairly tight mouth to lung experience so you’re probably going to want to go for higher nicotine levels here, I settled on 12mg which I found kept me satisfied. One downside of the pod's design is that you can’t see how much eliquid you have remaining without removing the pod, but on the upside, I’ve had absolutely zero leaking or condensation build up under the pod.

Two additional features which Vaptio highlight for the razor as selling points are the pre-heat and vape time functions. To activate the pre-heat function, press the power button three times and the device will fire the coil at 1.5amps for fifteen seconds then supply a brief pulse on the haptic feedback to let you know it’s ready. This is supposed to bring the coil up to temperature and improve flavour before you vape, but I found it made little difference and in practice the same effect will be achieved after one or two normal puffs in any case. The second feature is the vape timer, this will give you haptic feedback after five minutes of vaping, supposedly the average time it takes to smoke a cigarette, and is intended to help new vapers know when to stop. I actually found the timer was set to around three and a half minutes, and that with my 12mg eliquid I was actually feeling satisfied with my nicotine intake just a few puffs before the haptic feedback kicked in so this is timed pretty well in my opinion, although how useful this feature will be in long term use is debatable as you tend to vape as much or as little as you need to feel satisfied.

Pressing the power button once will activate the ring of lights surrounding it to show remaining battery life in 25% increments and I found that a full charge lasted almost but not quite the full 2ml capacity of the pod. During my charging test, the razor achieved a 0.6 amps charge current reaching 557mah charge in 1h 14m.

This is a very good little stick style pod system with much to recommend it, especially for the new vaper, and it’s easily pocketed for those times when you don’t want to carry around a large kit or blow huge clouds. It’s currently so new that the only place I was able to find it for purchase was directly from vaptio for $33.90 (approximately £27), which makes it perhaps slightly more expensive than other similar pod kits, but it feels like it’s made to a high standard from quality materials. One thing I can’t seem to find is replacement pods, so I’ve no idea on the ongoing costs, but I’m sure those will also be listed in due course.

Many thanks to Vaptio for sending the Razor pod kit out for review. 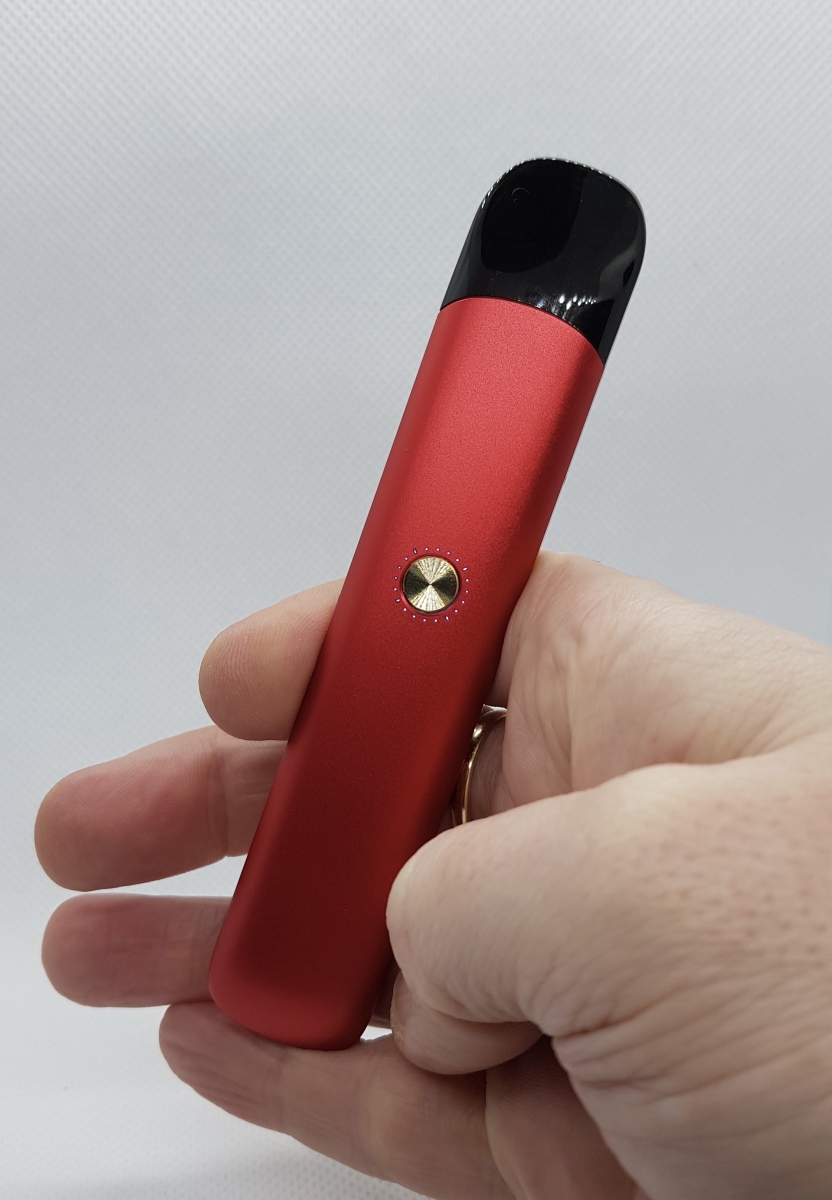