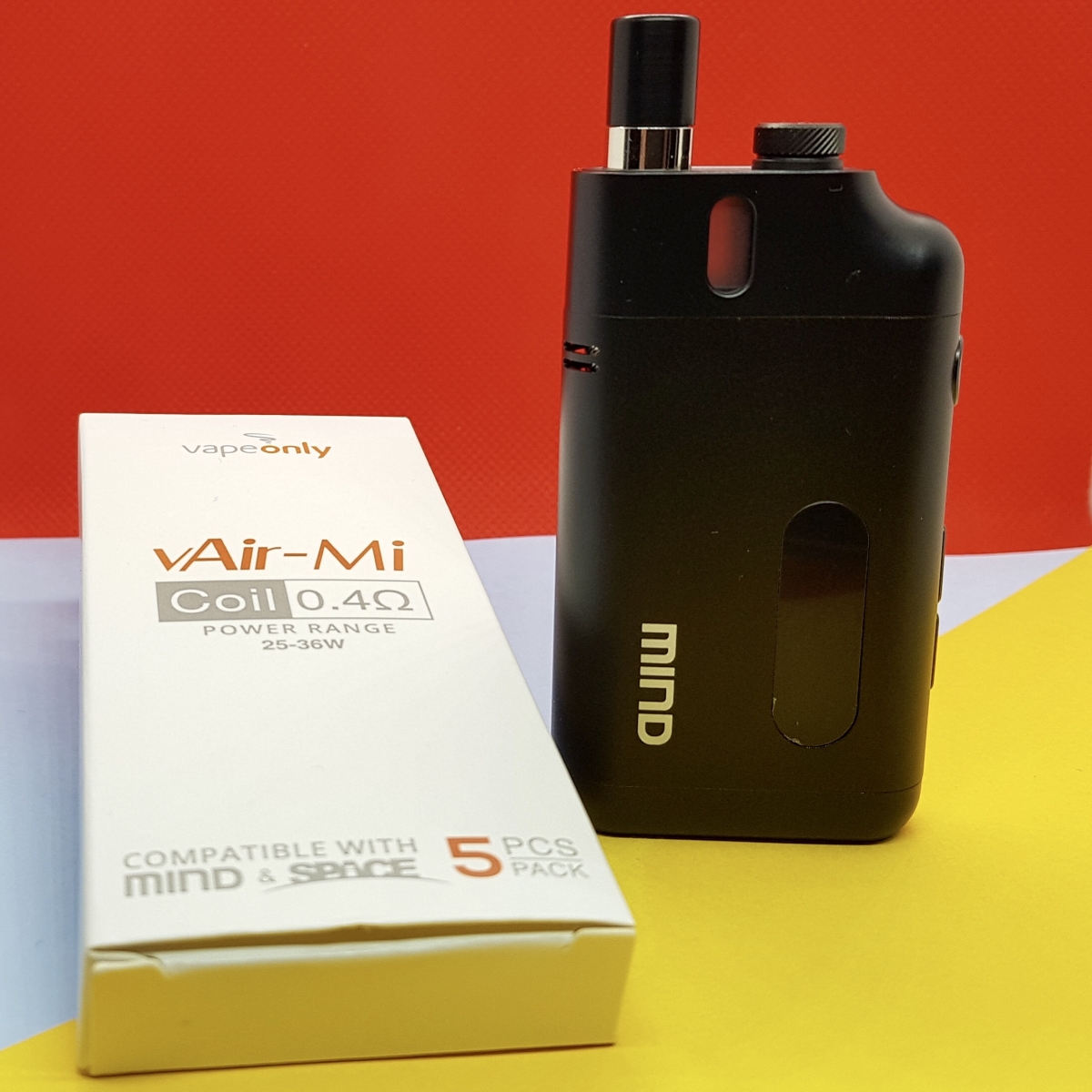 Heaven gifts have sent out the latest offering from Vapeonly, the mind pod pro kit, for review along with an extra pack of vAir-Mi 0.4 Ohm coils not included in the kit.

The kit comes packaged in a plastic clamshell case with the mind pod pro kit on full display in your chosen colour. The one sent out for review is black but it’s also available in red, blue and gray. There’s a small cardboard sleeve around this with a list of specifications on the back. 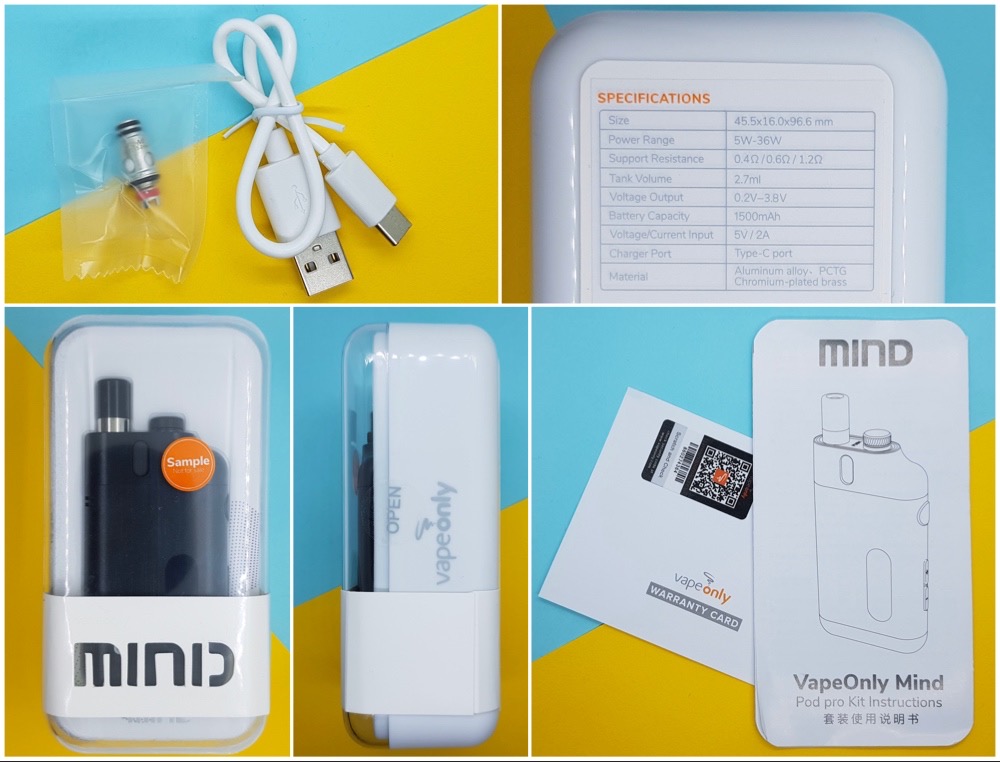 Once opened the top plastic tray houses the device itself with the pod/tank already preinstalled with a 1.2 Ohm coil. Surprisingly there’s no plastic protector in place on the bottom of the coil assembly to prevent accidental firing whilst in shipment. On the next layer you will find a manual and warranty/scratch ‘n’ sniff authentication card and finally on the bottom layer there’s a small cardboard box containing a usb-c cable and an extra 0.6 Ohm coil. 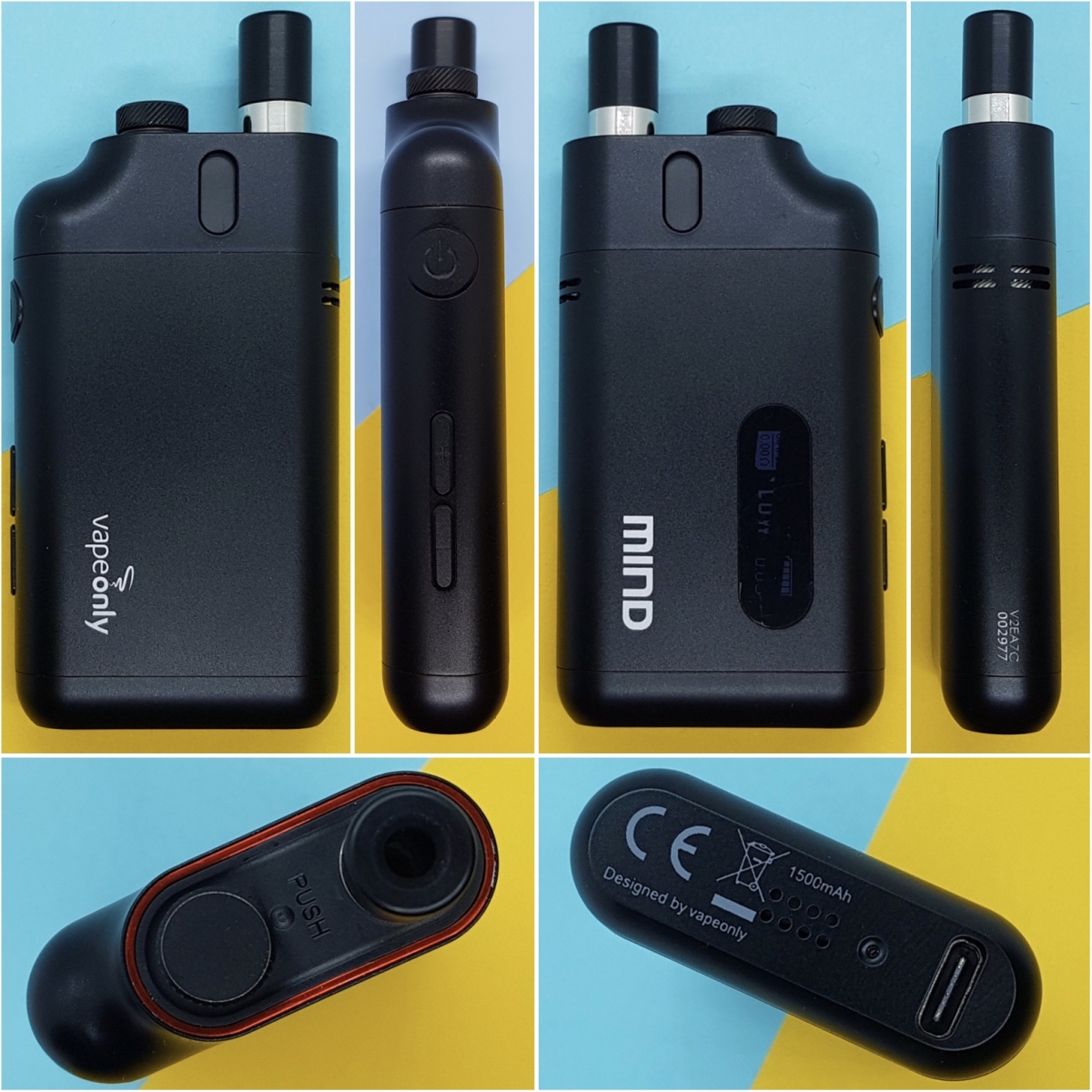 This is an extremely compact little pod/aio kit, not much bigger than a SMOK trinity alpha or Lost Vape Orion, and it feels quite lightweight due to its aluminum alloy and plastic construction, but despite its diminutive size, it manages to pack in an impressive 1500mAh battery. The main body itself is a solid feeling piece of aluminum with a clear LCD screen on one side, fire/up/down buttons on one edge, air intake on the other edge and a plain black sporting the VapeOnly logo.

The buttons, lower portion housing the USB-c port and the top are all plastic. The buttons have a nice positive clickiness to them and there’s zero button rattle, which is always nice to find. The lower portion feels quite solid, but the upper portion which holds the pod feels quite flimsy, especially around the large eliquid viewing ports, and is obviously relying on the pod being in place to offer it structural integrity, so I’d recommend storing this with the pod fitted (minus a coil of course if it’s going to be unused for a while).

The pod is constructed from a smoked PCGT plastic. Despite this, it’s still easy to see your eliquid levels in use thanks to the two large viewing ports, and is held in place with a spring loaded mechanism rather than the usual magnets or pressure fit. To insert or remove the pod from the mod, you press down firmly on the pod. I’ve found the best way to do this is by pressing on the fill port cap. This system has worked brilliantly in use, no pods flying off at random here. Coils are fitted into an airflow ring and then press fit from the bottom. Up top is the fill port and a 510 drip cup and delrin drip tip. Filling is a breeze, simply unscrew the fill cap being careful not to lose it and fill, as there’s only a single hole you’ll need to take a little care not to fill too quickly to prevent air locks forming with the inevitable resulting mess. 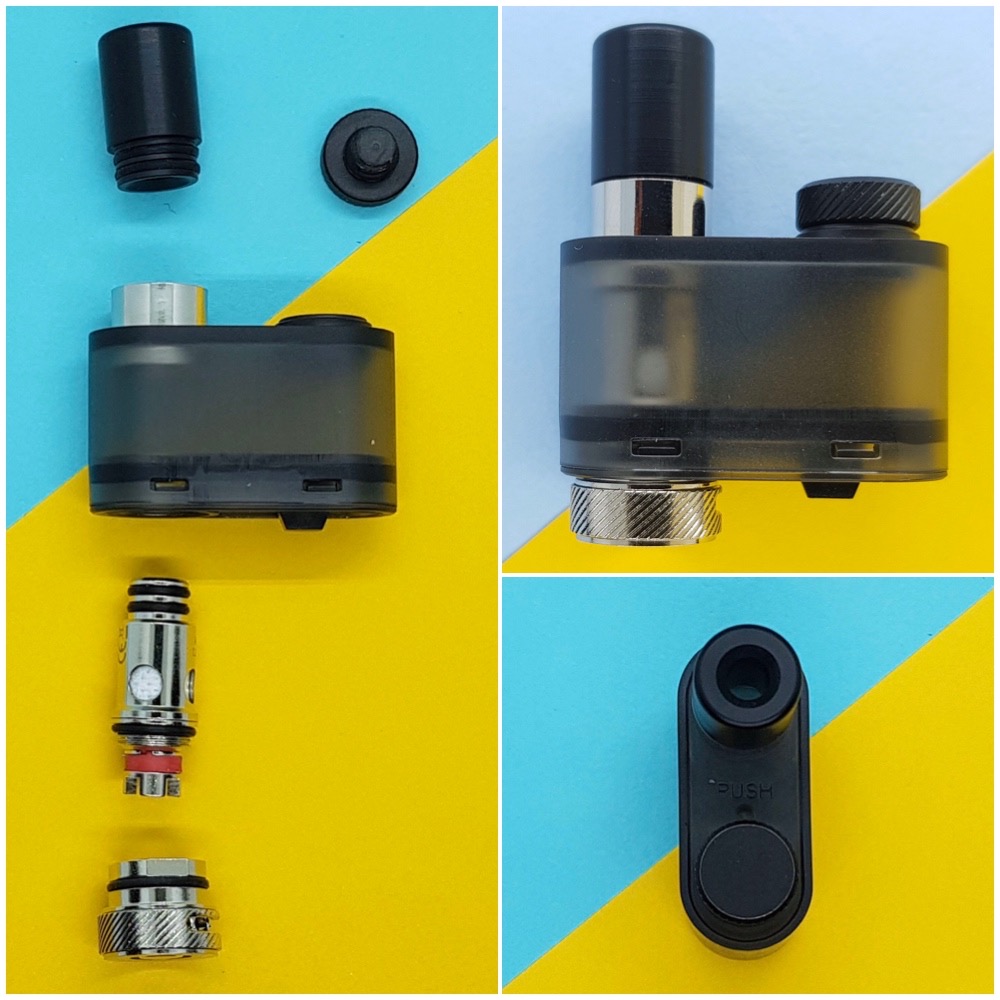 Two coils are included in the kit, a 1.2 Ohm round wire coil designed for mouth to lung and a 0.6 Ohm mesh coil for restricted direct lung use. Heaven gifts also sent over a pack of the 0.4 Ohm mesh direct lung coils to try. These are screwed into the airflow control, which has an adjustable airflow ring, and the whole assembly press fits into the pod. The coils also have four large 4mm wicking ports so even modern 70VG liquids haven’t been an issue. 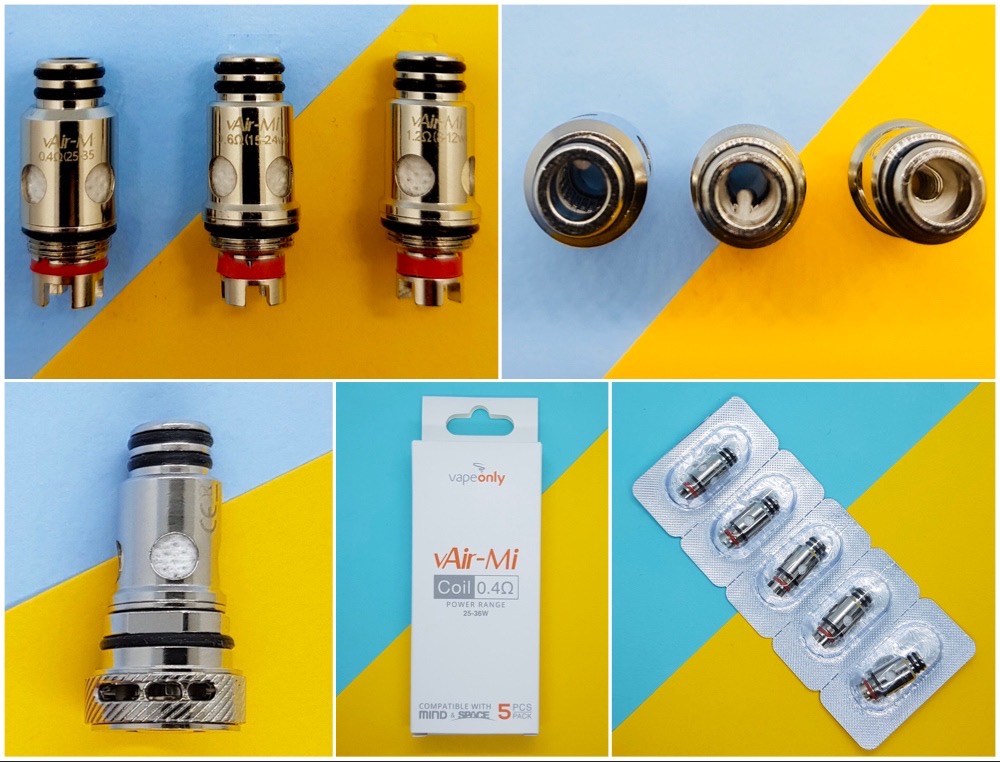 I started the test run with the 1.2 Ohm coil in place and when the mind kit is turned on it starts out in its “simple” mode with three adjustable settings “low/mid/high”. With the airflow fully open it was way too airy, but I found that with the airflow set to a small dot and the power set at “mid”, I was getting a fairly restricted MTL draw with surprisingly good flavour which I enjoyed tremendously despite it not being my preferred mode of vaping, especially once I’d settled down on the couch for an evening of TV.

In use, I found myself having to trigger fire the mod because if I thumb fired, I was tending to cover up the airflow ports and one other issue was that if anything, the coil would perhaps wick a little too well and periodically flood due to those large wicking ports. I also seemed to be experiencing quite a bit of condensation build up around the pod so periodic inspection and cleaning is a must. On the plus side, I continued using this for the next couple of days and got a full day and a half out of a single charge with this set up.

Next up was the 0.6 Ohm coil which, as a restricted direct lung vaper, was much more in my wheelhouse. I found this worked best on ‘high’ in the simple mode but I couldn’t quite dial in the vape I wanted even with the adjustable airflow ring so I swapped to wattage mode by clicking the fire button three times to give me a greater degree of control.

In this mode wattage is adjustable from 5 watts but will limit you to a set maximum wattage depending on the coil you have in use, 12 watts for the 1.2 Ohm coil, 24 watts for the 0.6 Ohm, and 36 watts for the 0.4 Ohm, and once you’ve dialed in your preferred setting you can lock the power by pressing the plus and minus buttons together. After a little further experimentation, I settled on 22 watts with just one of the three airflow slots open. This gave me a very restricted direct lung vape with good flavour comparable to other similar mesh pod systems. The flooding I experienced with the 1.2 Ohm coil wasn’t evident here but another problem quickly became apparent, heat was being transferred from the coil to the 510 drip cup! This can get quite hot, especially if you chain vape and, whilst I haven’t burnt my lips, it can be an unpleasant experience when you’re not expecting it and has lead to me having to adjust the way I hold the device to try and overcome the problem. Battery life was still good and I got a full day at work out of a single charge. The 0.4 Ohm mesh coil also performed very well at 33 watts with the airflow about half way open with perhaps marginally better flavour than the 0.6 Ohm coil, but the battery life is compromised and you won’t get a full day of use from this.

This brings me around to one of the aspects of the Vapeonly mind kit I was most intrigued by, the 2 amp 45 minute charging. In testing, I was getting around 1.93 amps charging with a charge time of around 57 minutes, a little longer than claimed but still impressive and under the magic one hour. Over three charging runs I also recorded little over 1600mAh charge which is above the 1500mAh specified. I can’t believe they managed to pack so much power into such a small package. Vape while charging is also supported, the mod will temporarily suspend charging whilst you vape, which is a welcome addition.

This is a great little kit with a few minor foibles, mainly the 1.2Ohm coil being prone to flooding and the 510 catch cup getting hot with the sub ohm coils. Battery capacity is surprisingly high for such a small kit, and the quick charging is impressive. The coils appear to be readily available at several vendors, including Heaven Gifts, so obtaining coils shouldn’t be a problem, but one thing I haven’t seen anywhere is spare tanks so I’d definitely recommend avoiding tank crackers until this situation changes.

Many thanks to Heaven gifts for sending out the have sent out the mind pod pro kit, for review. Don’t forget the "Apotv10" discount code if you decide to order. 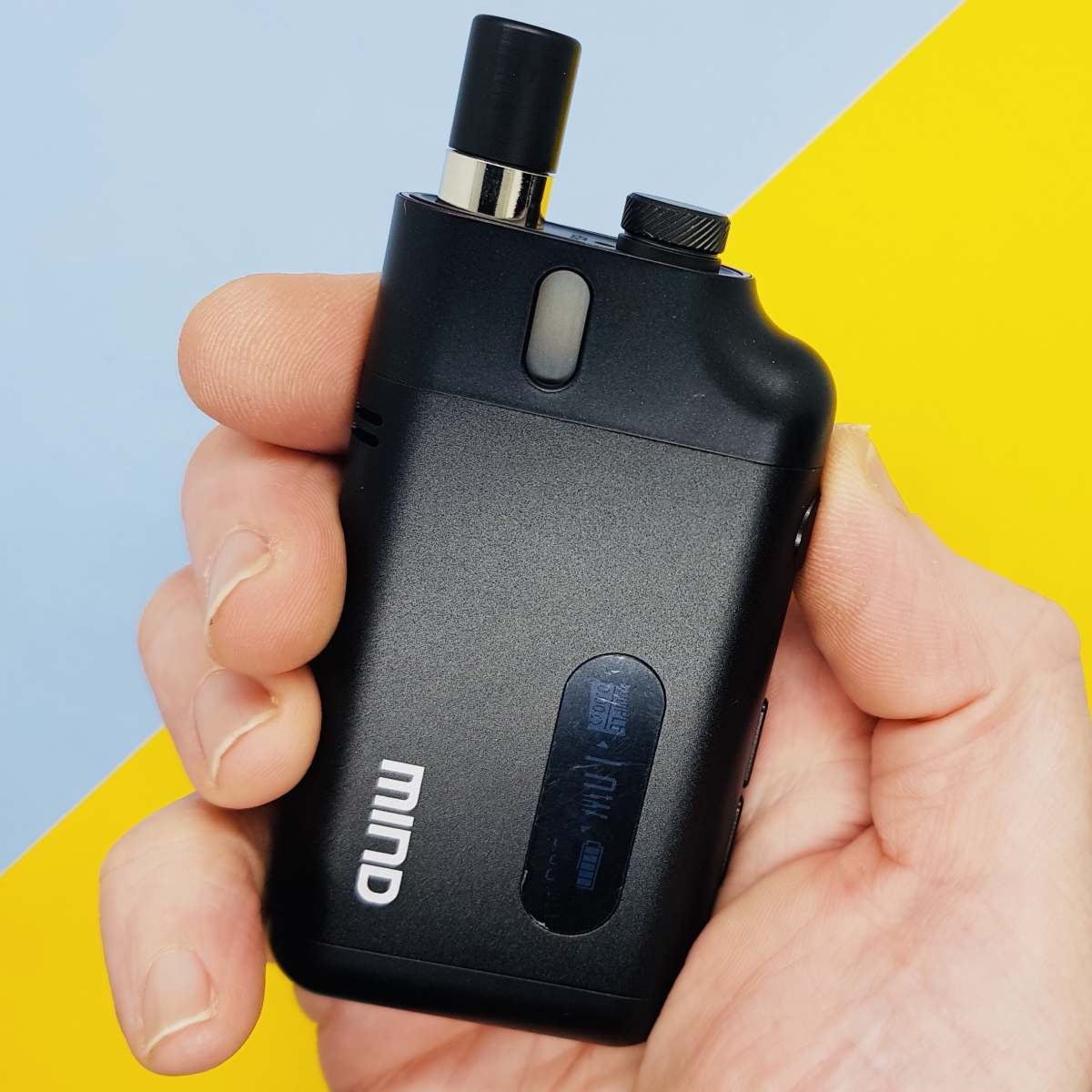