Vandy Vape are one of the most varied manufacturers when it comes to vape kits, they are always coming out with something a bit different and they are one of the few companies that provide users kit from DIY tanks/RDAs to stock coils. Although the Rhino Pod Mod isn’t their first AIO (All In One), it appears to be their smallest to date, but don’t let the small size fool you as they have crammed a fair bit into this kit. 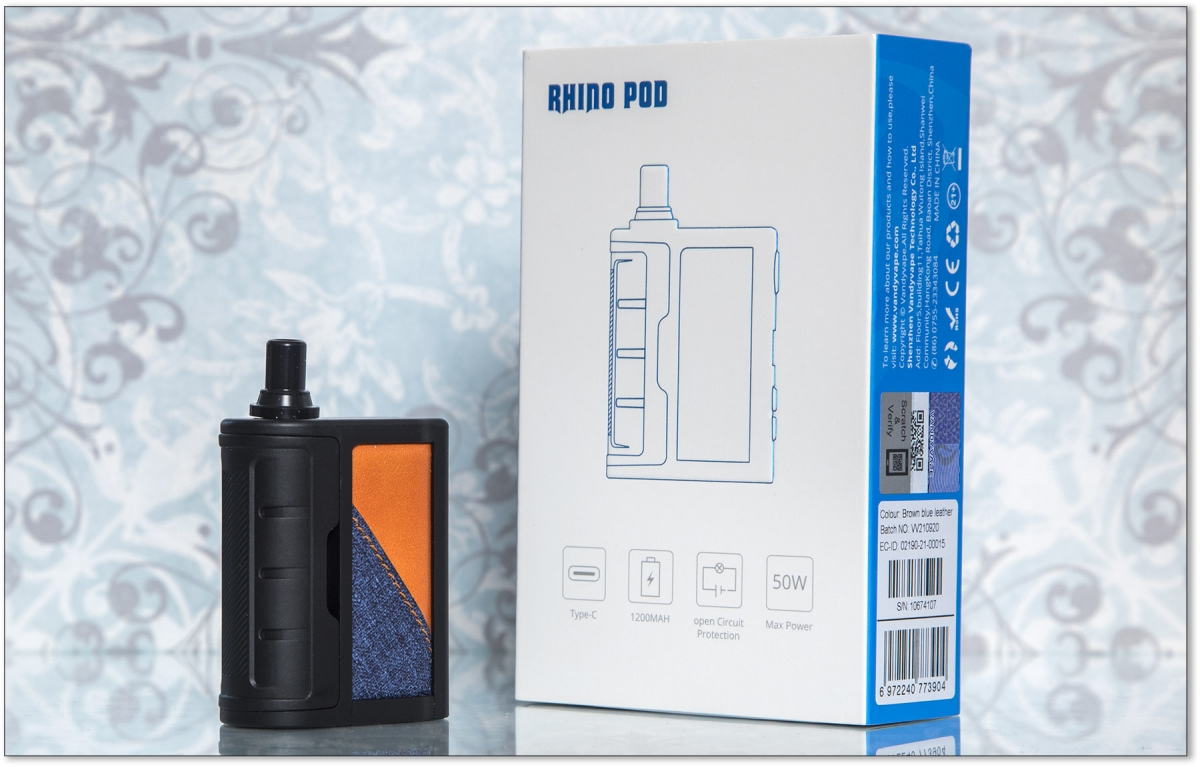 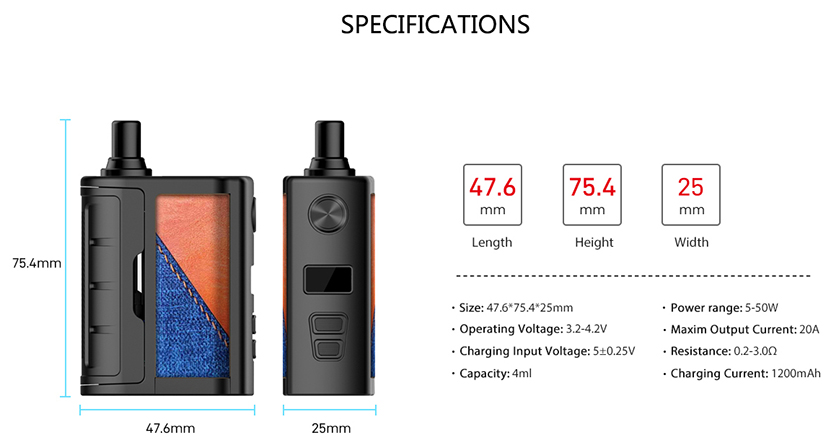 The Rhino box is a bit like the animal; big and ugly! I doubt I would give it a second glance if it was on a shop shelf, but it’s what’s inside that matters. It’s a simple white outer sleeve and an open box holding the contents in a foam insert. 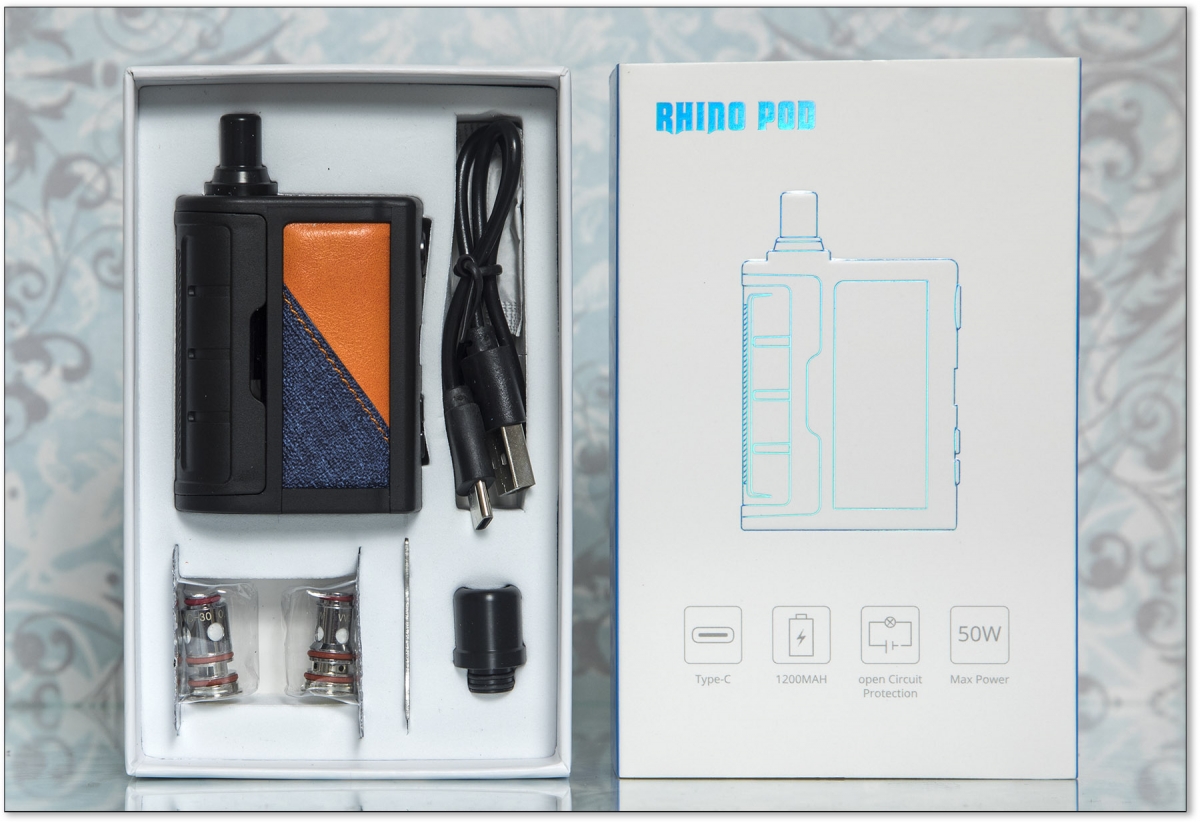 The presentation on the inside is quite good and you get to see all the contents without rummaging through a separate box, the user manual is underneath the foam.

The bundle is reasonable and you get an extra 510 DL drip-tip (MTL tip pre-installed) along with a coil spanner. The included VVC coils are: 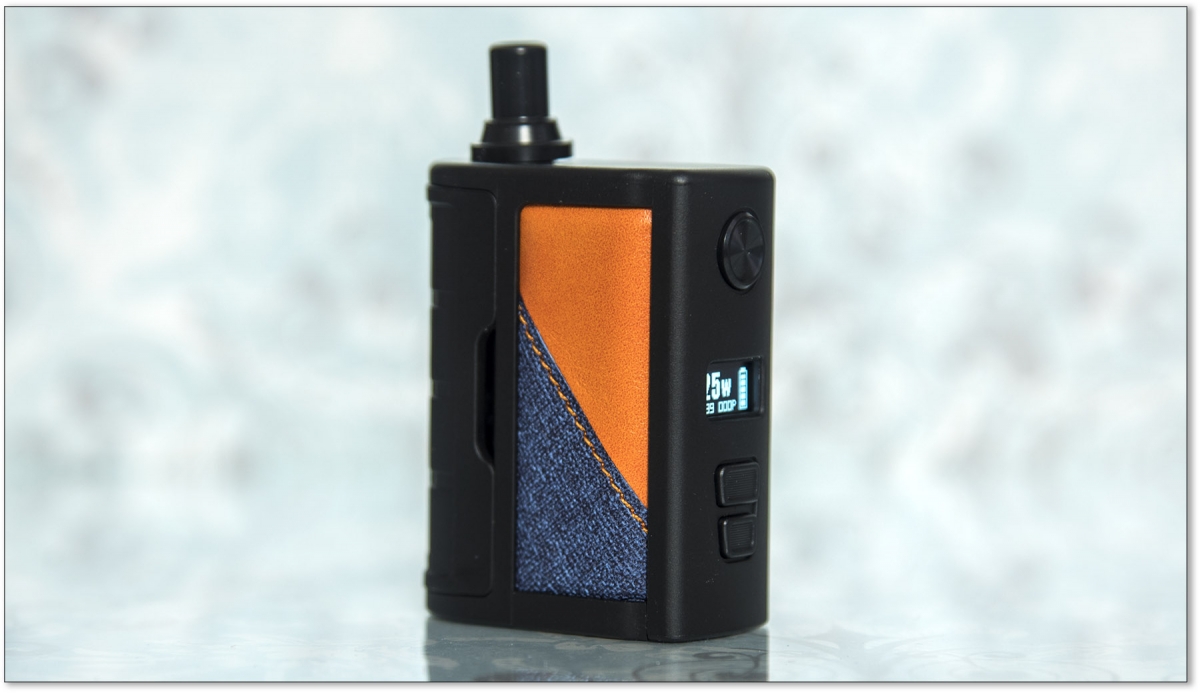 Essentially the Rhino Pod Mod is an AIO (All In One) device where the tank/pod is contained within the device, Vandy Vape have been quite innovative with this design and have packed quite a large capacity for the device size. 4ml is quite impressive and is very welcome especially if you intend to use the Rhino for RDL/DL vaping.

The compact size and the incredibly light weight are the main things that stand out with this kit, Vandy Vape have really gone to town miniaturising a fully functioning vape into such a small bundle. To think this delivers up to 50 watts is impressive. 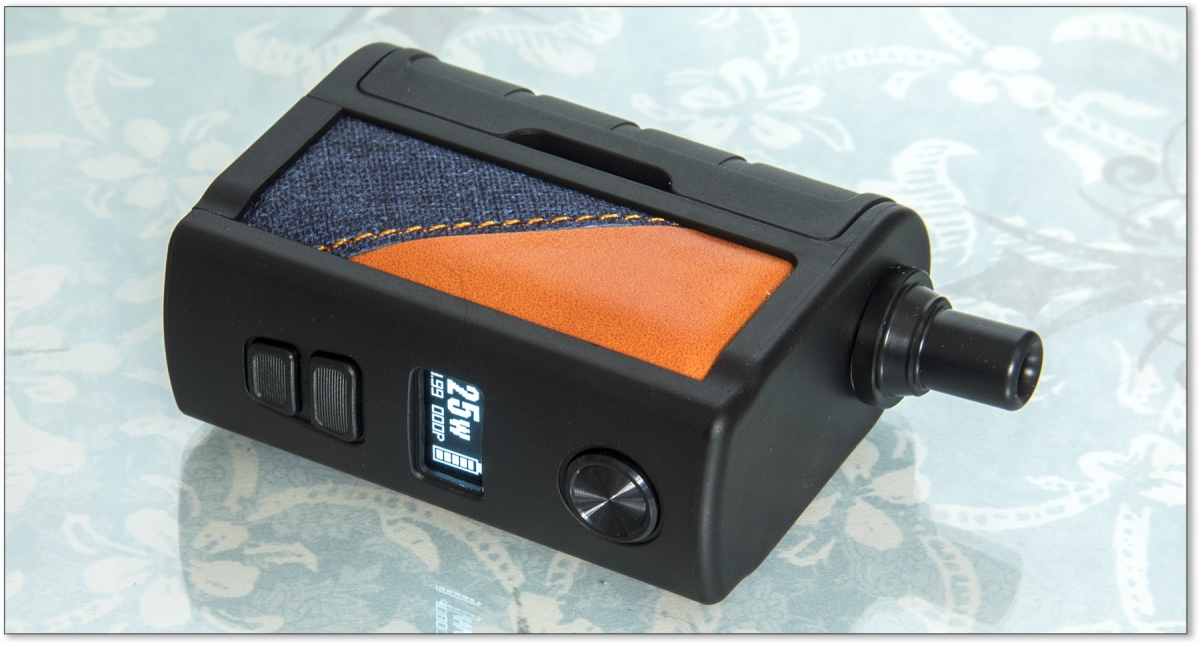 The weight saving is achieved by making the body from plastic and the internal LiPo battery, yet it doesn’t feel cheap. Vandy Vape are the masters of plastic and they have managed to make the Rhino Pod Mod light, compact and durable.

(*Yes I photographed the drip-tip on the piss – my bad).

The main body is black plastic and the colour options are just the material and faux leather side inserts, I really liked the look these gave as they look much better than Vandy Vape’s trademark matt resin that they use on many of their other products. 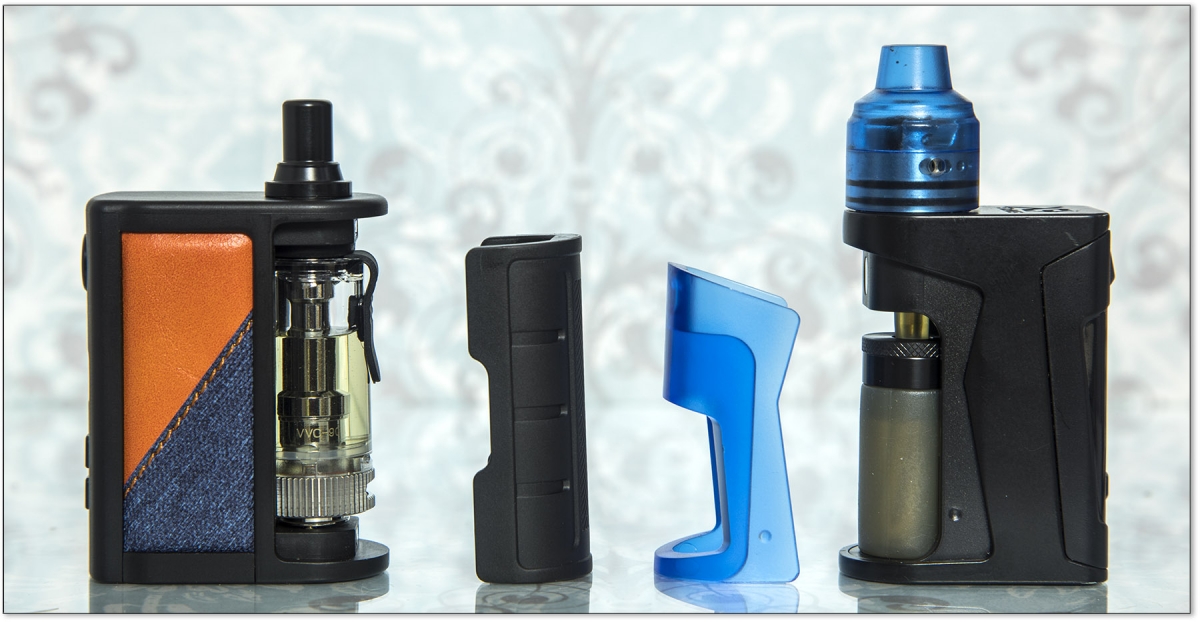 The Rhino Pod Mod reminded me of an earlier Vandy Vape mini product, the Simple Ex, which was and still is the smallest Squonk device, but the Rhino is more of a ‘normal’ stock coil vape kit with a bigger battery and screen with variable wattage, I guess they are not as similar as I thought but it shows Vandy Vapes miniature pedigree.

The removable tank cover has been really well sculpted, it feels very solid and there’s absolutely no rattle or wobble as the magnets hold it in place perfectly. The USB-C charging port is on the base along with an air inlet, this is a small but clever feature as the side inlets can be blocked with your hand when vaping.

The pod/tank impressed me the most, it fits inside incredibly well as it has the rear of it shaped to slip into the rear (that’s what she said) snuggly and also offers juice visibility through the side vents. Once the coil is fitted, it simply slides into position, but once in place it is rock solid.

The coils are press fit and push in quite far as the clever airflow adjuster also doubles as a leak resistant reservoir. The airflow ring has also been well made and is quite tight (in a good way) which provides decent airflow control from RDL to a half decent MTL when fully closed.

Though you can just about pull the coil out by hand, the included spanner makes it much easier and I like how the little hole makes it possible to fit it onto a keyring, a little detail but one that shows the overall attention to detail that Vandy Vape have applied to the Rhino.

Then there’s the superb fill port, another small detail but a well designed one as it is chunky and made for prolonged use. The larger tab makes it easy to grip, and the fill port is very generous. It is designed for easy access to refill once the tank is fitted inside the mod, it doesn’t matter that it looks a bit chunky as it is hidden underneath the cover when in use. 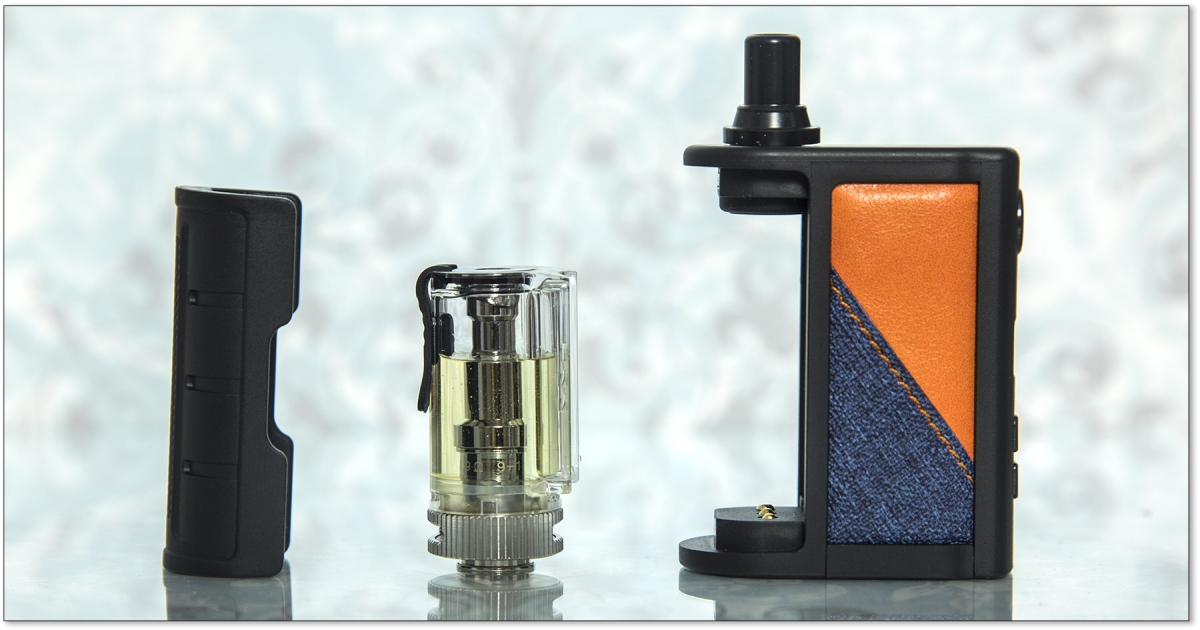 Once filled up, you can still see the coil details (ohms and wattage range) which is rare for a ‘pod’ and is very welcome. Fitting the tank was a little fiddly the first time as you get used to it as it felt like you were forcing it but that’s normal as it pushes the spring pins down, but the overall fitting impressed me. This thing feels so solid all over. 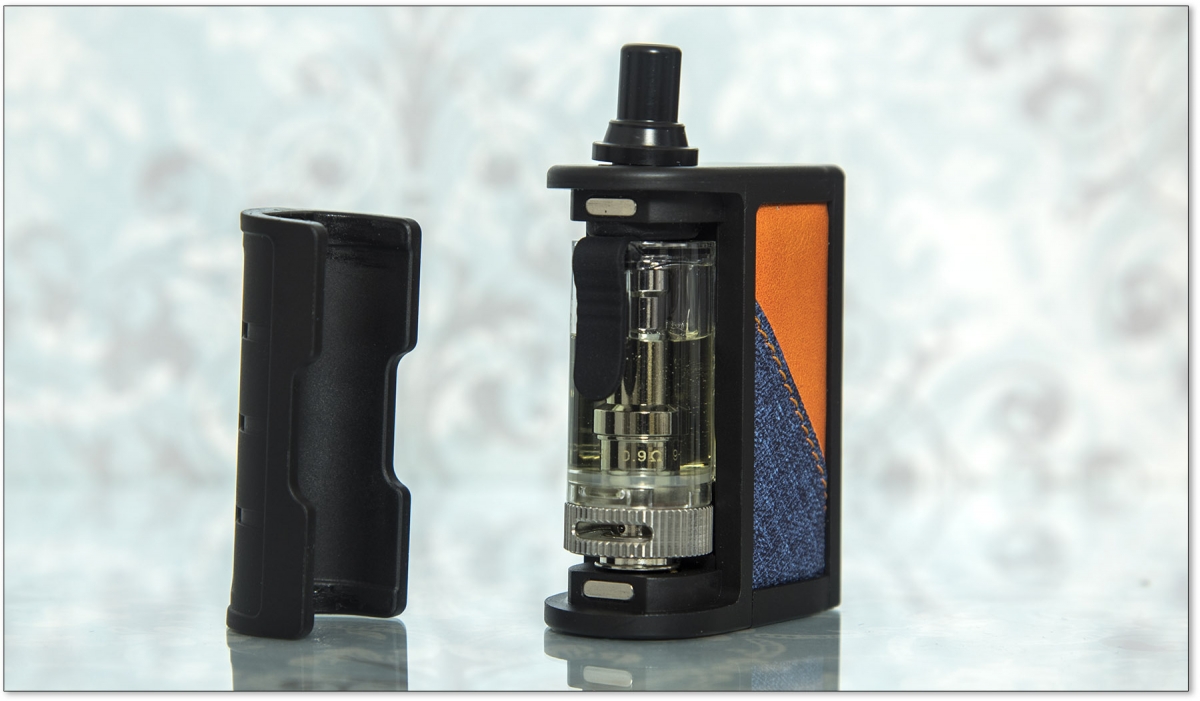 Once fitted, you can set the airflow, it’s quite stiff (she also said that) but that matters in a tank like this, loose just lets too much airflow in and makes an MTL draw too loose. Fully open is surprisingly loose so RDL is easily achievable, and you can get a borderline full DL draw also.

There’s little point in doing a ‘Controls’ section as the Rhino is very basic and is variable wattage only. It does have a couple of handy functions though:

A hidden feature is the ‘Auto Wattage’ which detects your coils ohms and sets the power to the mid power range of that coil, it also limits how much you can increase the wattage so you cannot accidentally burn out your coil. It works really well and I found the auto setting was bang on at 12 watts for the 0.9ohm coil. 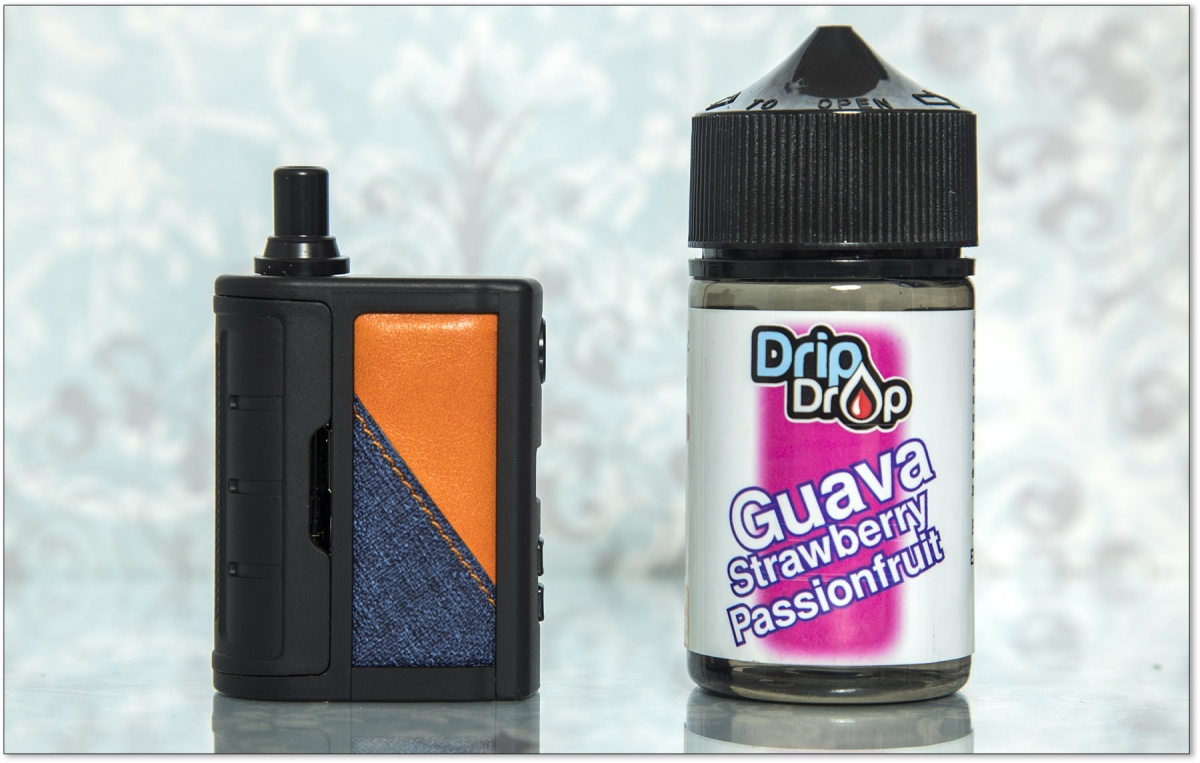 I’ve been enjoying Drip Drop’s 50ml range recently and this Guava Strawberry Passionfruit is lush, so I decided to test the Rhino with this as I knew what to expect. I started off with the 0.9ohm coil for a mouth to lung setup, the airflow ring needed to be fully closed to achieve a cheek pulling MTL draw though. The drip-tip was just right so I used the included one.

MTL was about average (more on that in the Negatives) but RDL was where the Rhino Pod Mod really came alive. After swapping the coil to the 0.3ohm VVC (30-45watts), popping on the larger drip-tip and opened up the airflow fully, I started off at 30 watts and vaped it for a few minutes at that to break the coil in. The vape was pretty good but as I crept the wattage up to 40 watts it really ramped up the flavour and warmth. The airflow was just a bit too restrictive for a decent full DL but was great for a RDL draw. It was a bit of a double take moment as you looked at the Rhino between draws ‘What?! This thing produced that vape?!’ This little bugger definitely packs quite a punch for its size.

With that said, I wouldn’t use this as a main vape as vaping at 40 watts soon starts to drain the battery and certainly wouldn’t last a day of normal use unless you keep on ‘top-up’ charging it, but I would say it’s an excellent second vape for out and about. This is what I used mine for and I surprised myself just how much I reached for this during times while I was out. I was really starting to enjoy this thing and it is better for those times when less clouds was important in public. 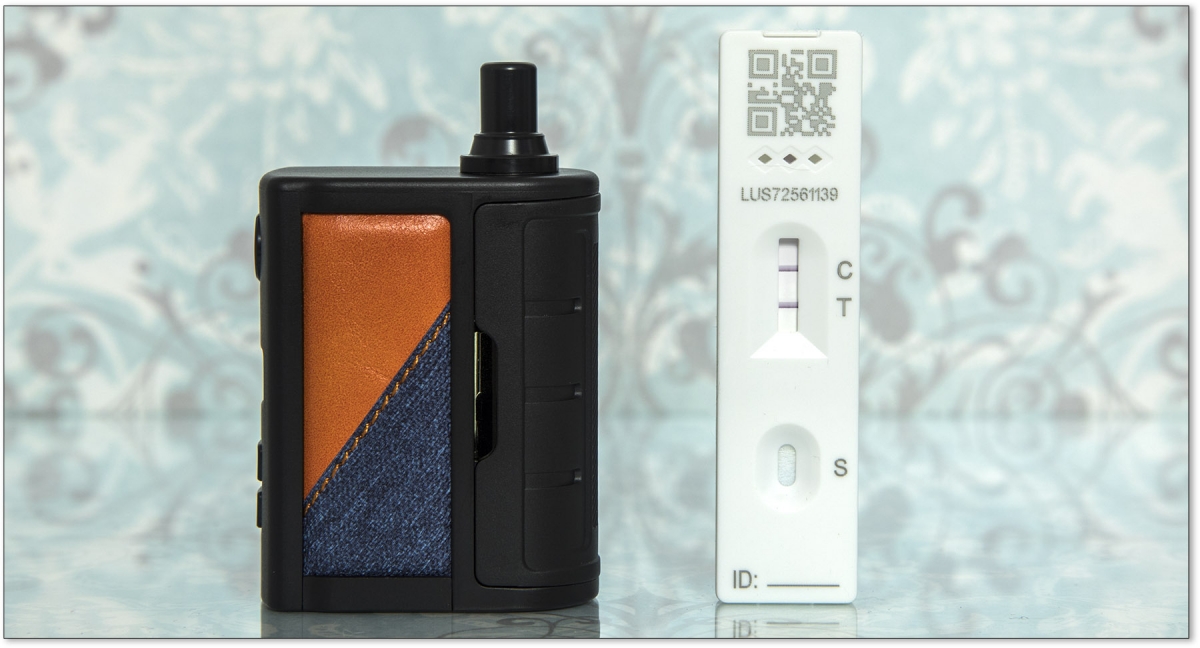 The first disappointment for me was the MTL vape which was mostly down to the VVC coil. Vandy Vape just don’t do MTL in my opinion. I got the airflow down okay but the vape quality was pretty average and felt very 2018 if that makes sense? As in coils and MTL pods etc. have really improved in recent years but Vandy Vape haven’t kept up with the competition. Even Smok have managed to finally do good MTL pods and coils in the last couple of years, but this VVC coil vaped exactly like an Apollo kit I bought back in 2018 which I was also disappointed with.

Surprisingly the Rhino isn’t as ergonomic as you would expect, it just feels chunky in your hand. There’s no pleasing some people eh? I mean Vandy Vape have packed a lot into such a small size so what should I expect? I’m conflicted as the performance still blows my mind for the size. 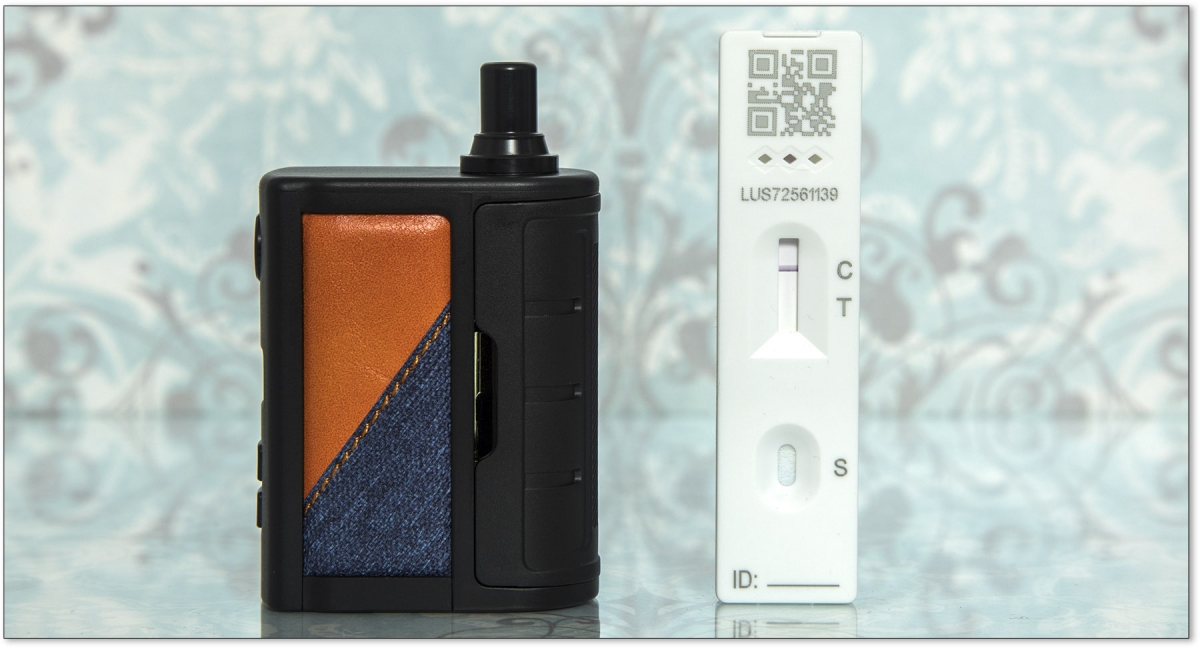 My next niggle is purely subjective to my tastes. As impressive as Rhino is with the compact size, superb tank and decent battery size etc, I didn’t quite feel the love. Part of the pleasure of vaping for me is the aesthetics of what I am vaping with, it was when I went to compare the Rhino with similar devices of its size that this became more apparent, a clear winner for me was the Joyetech ObliQ: 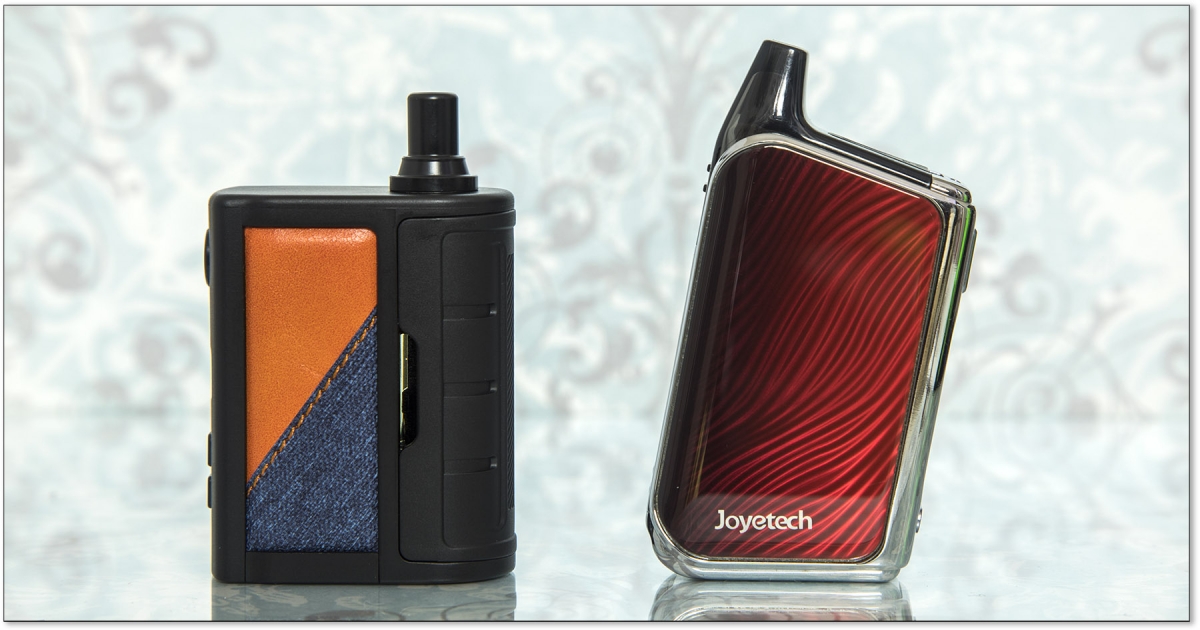 The Obliq is lightly taller but thinner but with a similar battery and e-liquid capacity, but has a full colour screen and better chipset and the posh as f**k styling appealed to me much more, it also produced an excellent MTL flavour. To be fair the Rhino does pip it in a few areas, the weight, tighter airflow control, juice visibility and the drip-tips.

Putting my ‘all thing shiny’ bias to one side for now, the Rhino Pod Mod has done a lot of things right and produced an impressive miniature vape which clearly punches above its weight. The RDL vape is bloody good, though it does lack in the MTL area unfortunately.

As a second or backup vape, I think the Rhino Pod is a great option. The style and construction fits well in the plastic range of Vandy Vape’s products, solid and durable but dinky enough to fit in most pockets.

I’ve chosen not to include battery life as a con, it’s actually pretty good for its size but is more of a second or spare vape, there’s no way a larger battery could fit in it anyway.

Though the MTL vape disappointed me, the Rhino Pod Mod kit still impressed me a lot with its RDL vape. Vandy Vape's attention to detail and quality stands out in this design. Had the VVC 0.9ohm coil been better, I would have been bouncing off the walls with this cracking little kit. 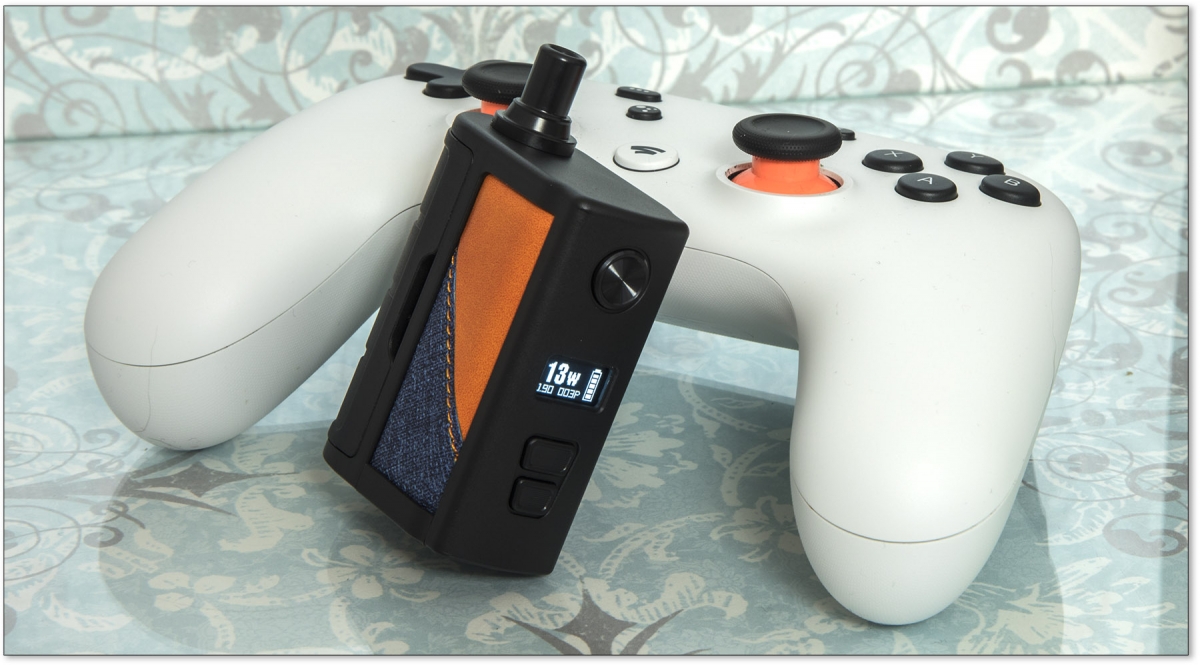