The kind folks at Sourcemore were confident I would enjoy trying out this pod kit and sent me over one to test, and I am so glad they did, I frikkin love this little pod. The MTL vape is one of the best I’ve tried. 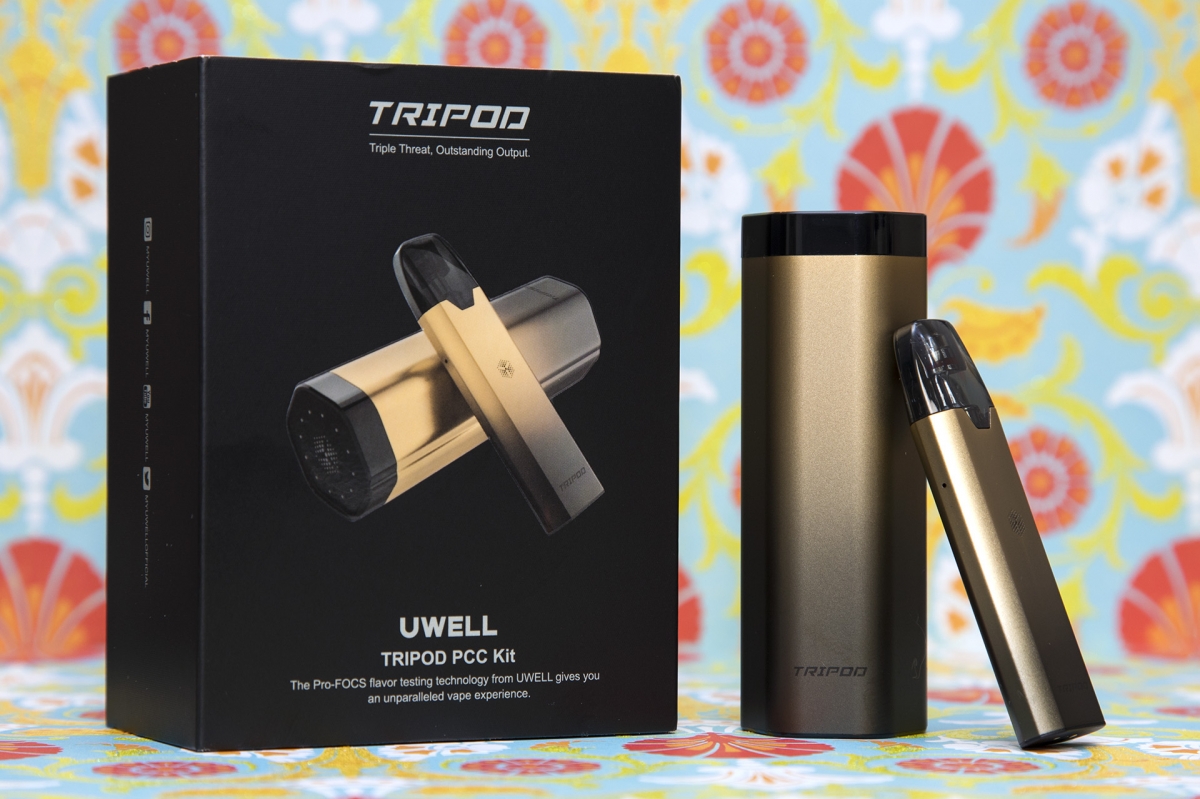 Tripod PCC Kit contains 1000mAh charging case and a 370mAh pod system with 11W max. It can carry three pods at the same time. You can fill different e-liquid into the three pods, which will bring you different flavours anytime and anywhere. The charging case is compact and can be easily held in the palm of your hand. There are some LED indicators on the charging case to show you the current power level and the charging condition. Tripod PCC Kit comes with a 2ml refillable pod and you can refill it with the e-liquid you like, such as freebase or nicotine salt. The coil resistance is 1.2Ohm and will offer you better flavour, bigger clouds and a smoother throat hit. Adopting the Pro-FOCS Flavour Testing Technology, it can control the heating temperature properly to provide vapers amazing vaping experience and is perfect for beginners.

Usually there’s some exaggeration in descriptions, but I can tell you that I pretty much agree with everything stated and the flavour is sublime!

The Tripod kit comes in a high quality two piece plastic box with an outer sleeve, the overall presentation is impressive. 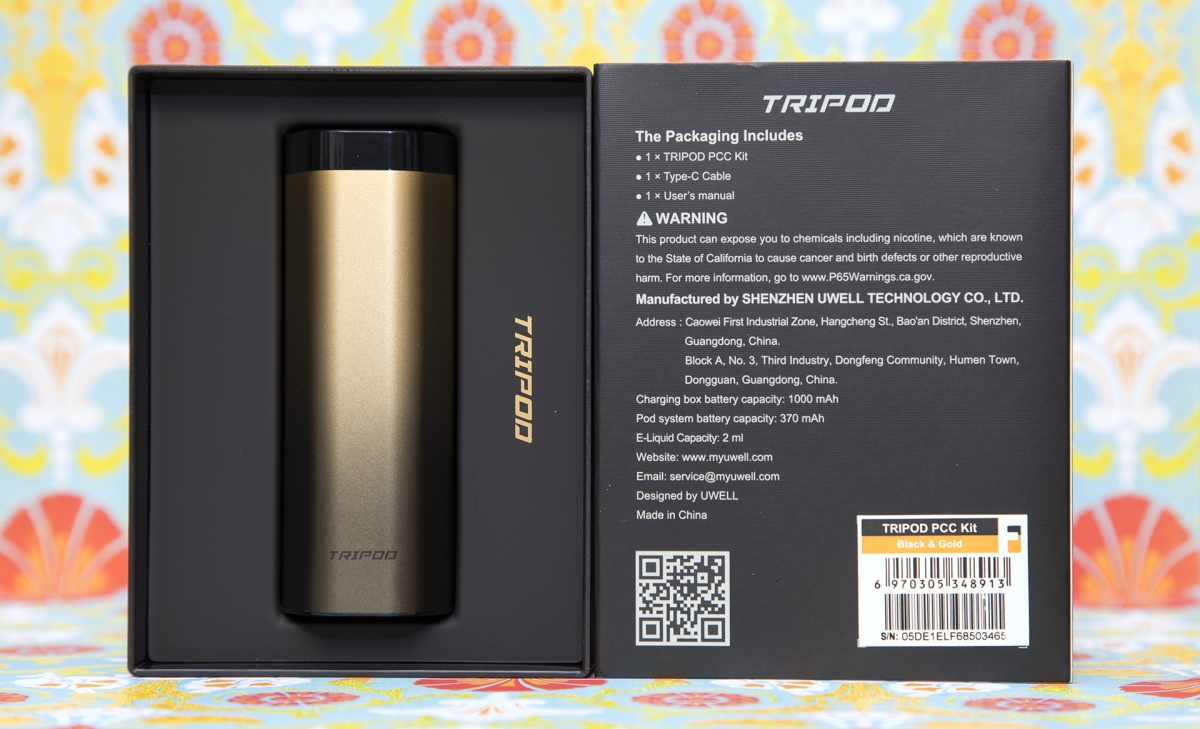 A detail I liked was the actual plastic box, I tend to keep my boxes and stash them in the attic but this one is actually useful as a storage container for other vape stuff (coils, DIY supplies, pods etc.), and the minimal branding is nice. As daft as it sounds, I would buy the box in Poundland and think it was good quality for that, I’m all for recyclable packaging but I’m even more up for upcycling.

Yeah I know, ‘yadda yadda, get on with it!’ so onto the contents. For the dosh there’s a generous amount included in this kit. 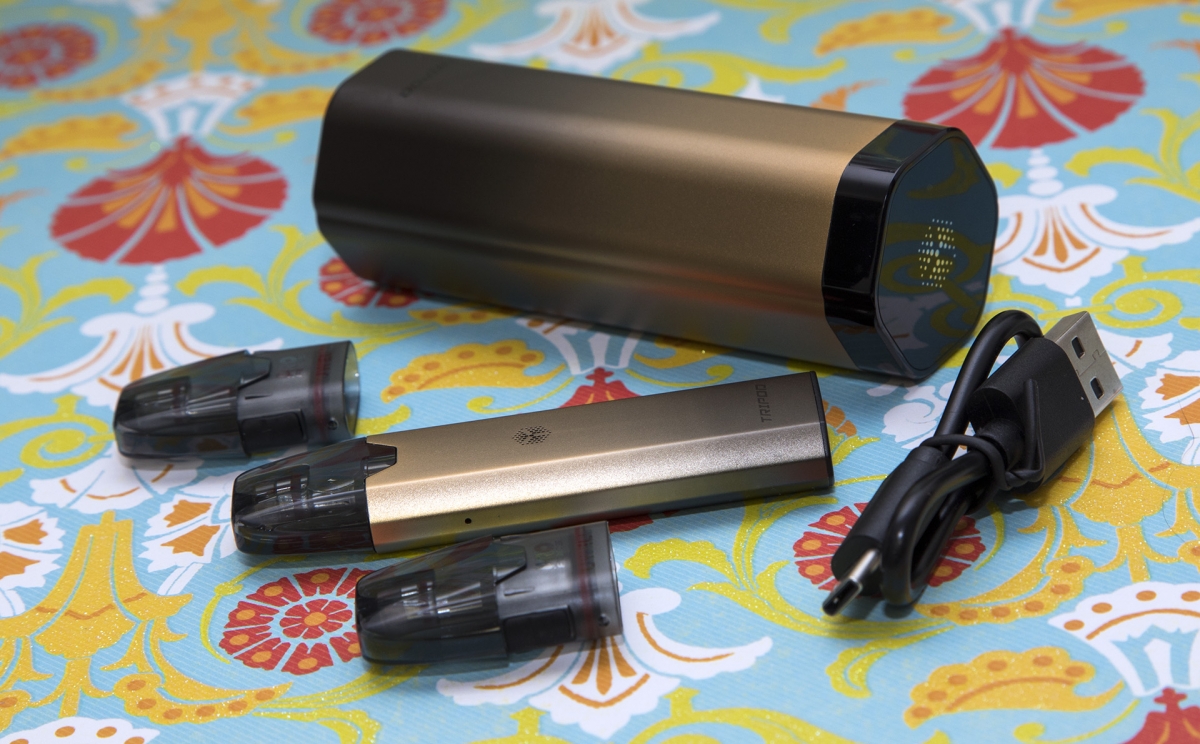 The list doesn’t look much but it’s the substance that matters, a pod kit along with two spares and a portable charging case. The usb-C cable is a little on the short side though.

Not forgetting the free box which is…………… SORRY I was off again!

The first thing you come across is the hexagonal charging case which is surprisingly lightweight. Sliding the case open reveals the pod system and spare pods, they are arranged back to back. 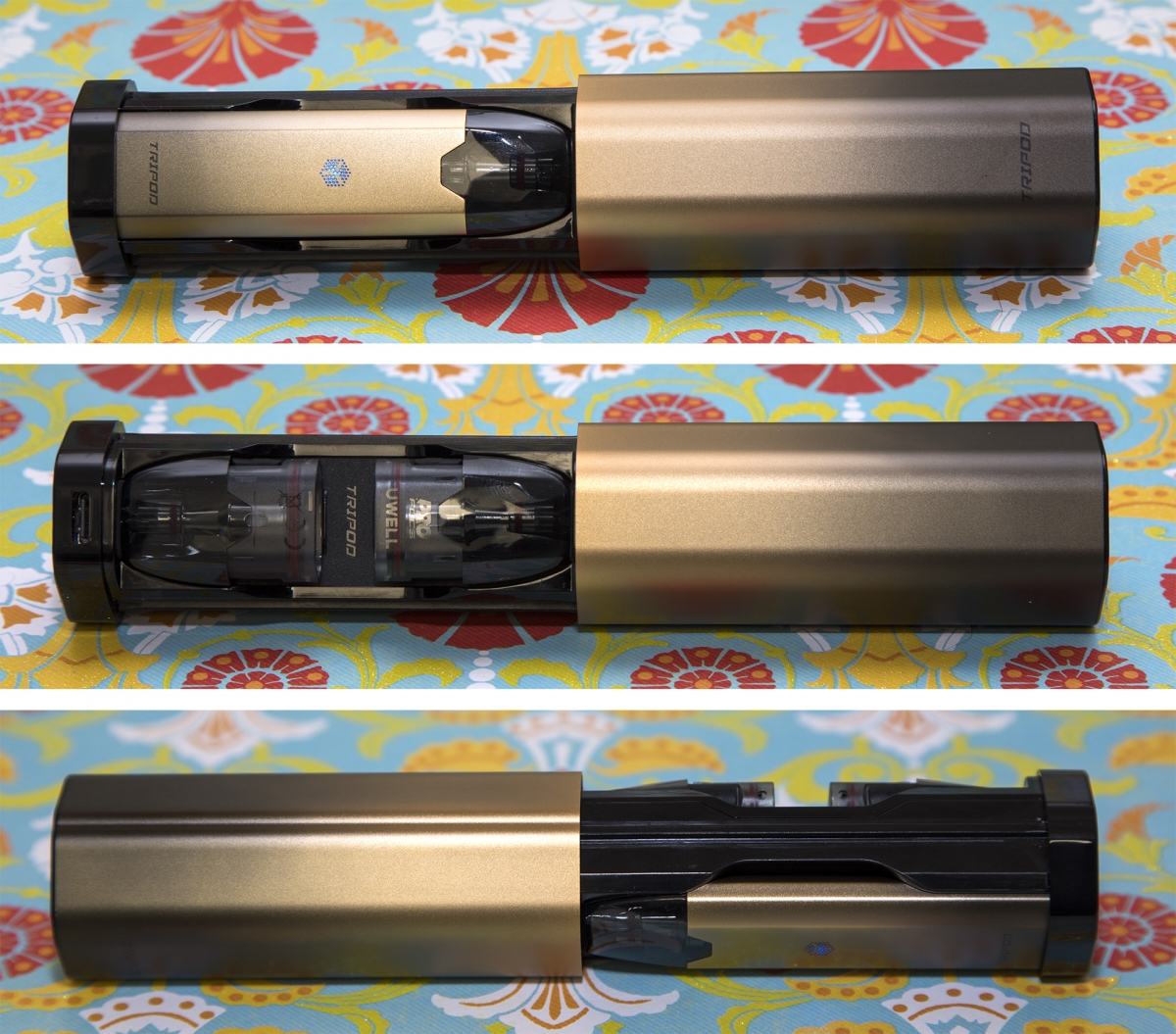 The case feels a little sloppy when open but sturdy enough, when closed it feels more solid as it has magnets in the base to keep it shut.

The pod is held in place as a friction fit so you simply lever it out from the mouthpiece end to remove it.

For me the biggest surprise was the TINY pod! – I say this in a good way and I was delighted to see how compact it was, I don’t know what I was expecting but it wasn’t this.
21.5 x 10.4 x 78mm
It is the smallest 2ml pod/battery I have used and is already my favourite to slip into a shirt pocket or jeans coin pocket. 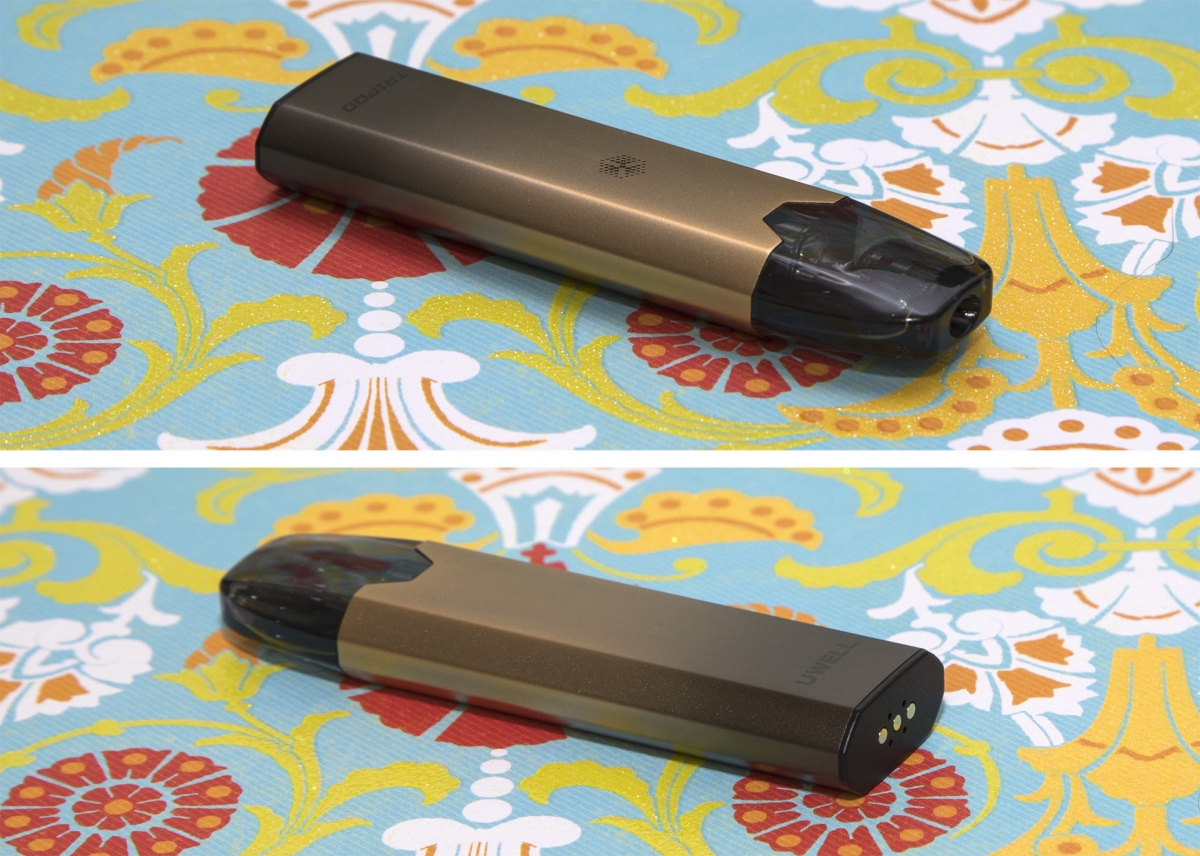 Here it is next to my other favourite MTL pod, the Innokin Sceptre, to give you an idea of the scale. 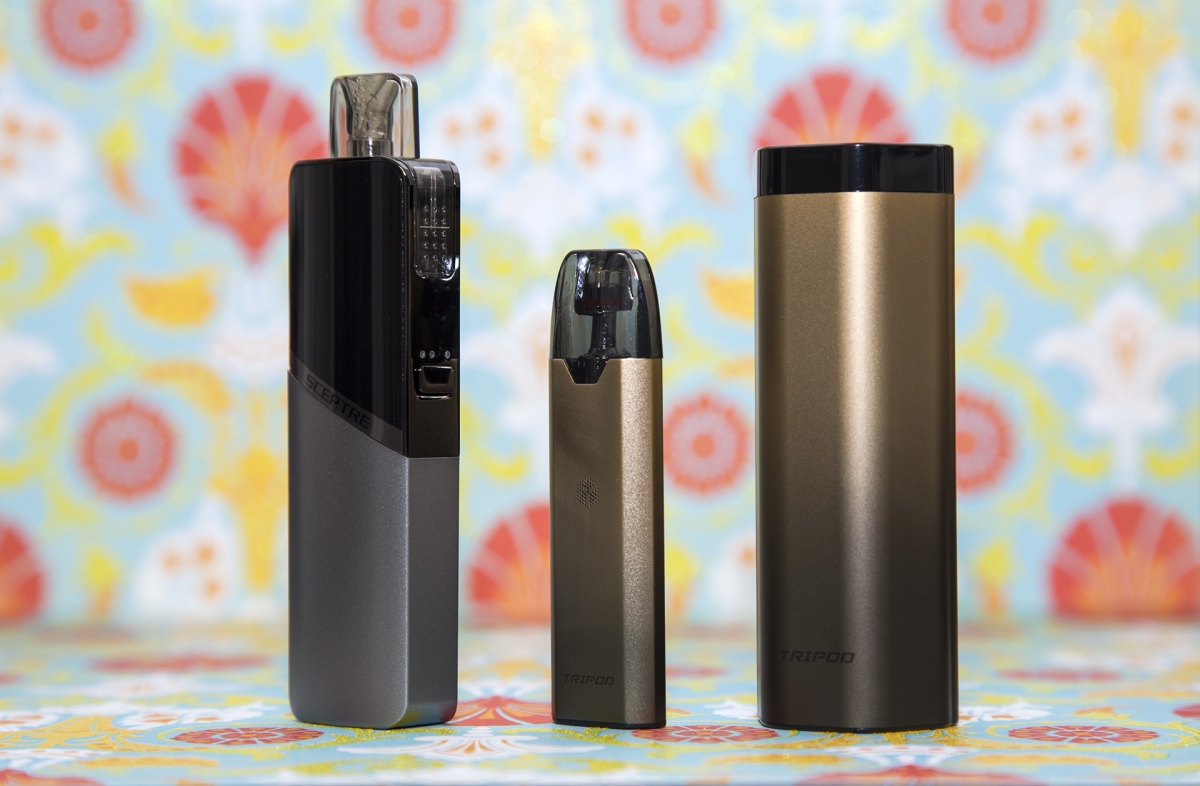 Obviously the charging case is a bit more bulky, but handy for larger pockets or in your bag.

On the base it has a rather cool touch sensitive battery and charging indicator, the lights blink and rotate. The box itself charges the pod system and the usb-C port is for charging the case.

The name ‘Tripod’ is a bit of wordplay, it hasn’t got three legs but it has three pods, as in the pod cartridge and not the battery part as there’s only one of those.

I love this idea, not only can you carry spares but you can have three different flavours on the go, something that proved handy already while I was reviewing them.

It took me a few minutes to get my head around that the case is double sided as I felt it should have been three sided to stick with the theme, but that would have made it a bit too big.

From new, the fitted pod has a peel off insulator which needs to be removed. The pod is a friction fit and pretty tight, pulling it out wasn’t a problem though.

There a little tab on the side of the pod to fill it up, this was a little fiddly due to the overall size but not to the point where it would annoy me. 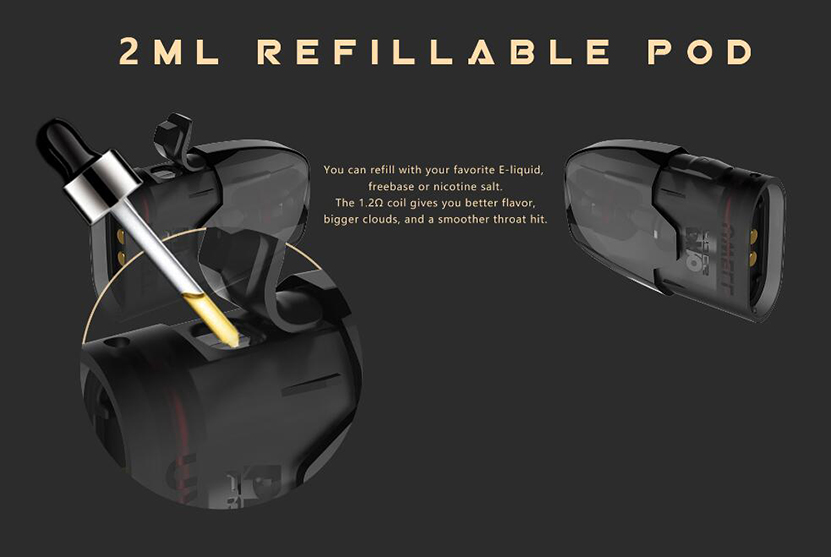 The lid of the box is opaque and…….. Doh!
I filled up the pod with my favourite nic salt and left it to saturate for ten minutes. From the very first draw I frikkin loved it already, the draw is nice and tight, one of the tightest pod draws I have used, not too tight but just right and it has that ciggie like draw. The flavour was simply spot on and equalled if not beat my other favourite MTL pods. 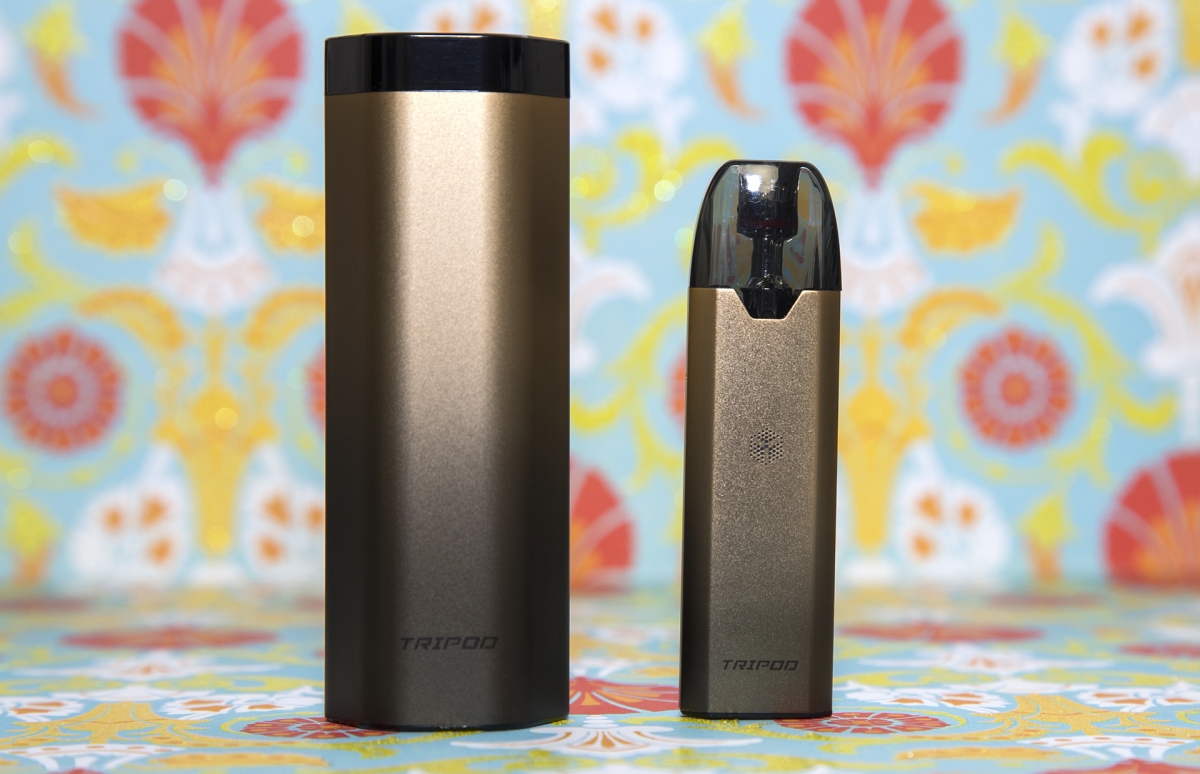 The warmth of the vape was just right too and never felt on the hot-side. It kept up with a bit of chain vaping without any problems though I tend not to chain vape on small devices like the Tripod.

A little detail I liked was the cubic status LED, it lights as you draw and shows the charge status, green for full power, blue for below 60% and red when at 20%, you need to charge at 20% as it will stop working.

It wasn’t long before I needed to top up charge it.

Charge of the LED Light Brigade

Charging is a really easy, simply slide open the case and slip the pod into the housing (base end first), the LED on the pod will light up with the charge level (see above but reversed) and you can close it up while charging. The base of the case will also light up and show it is charging. However you cannot tell the charge level so you need to look at the pod's LED which means you have to open the case again. I found this to be a bit of a faff so I just got used to how long I left it in for, the outside lights turn off when it is fully charged.

Charging the case itself is simple and oddly pleasing, 1.5 Amp via usb-C means the charging won’t take long at all. It took around 30 minutes tops from a low charge, but the thing I liked was the charging status LEDs which is kind of like a circular chase of the remaining charge if that makes sense? It’s not important but I kinda liked it.

The case will roughly fully charge the pod around three times from 20% which makes sense.

The Pod system can still charge while the base is charging too, this came in handy a few times as it happens. 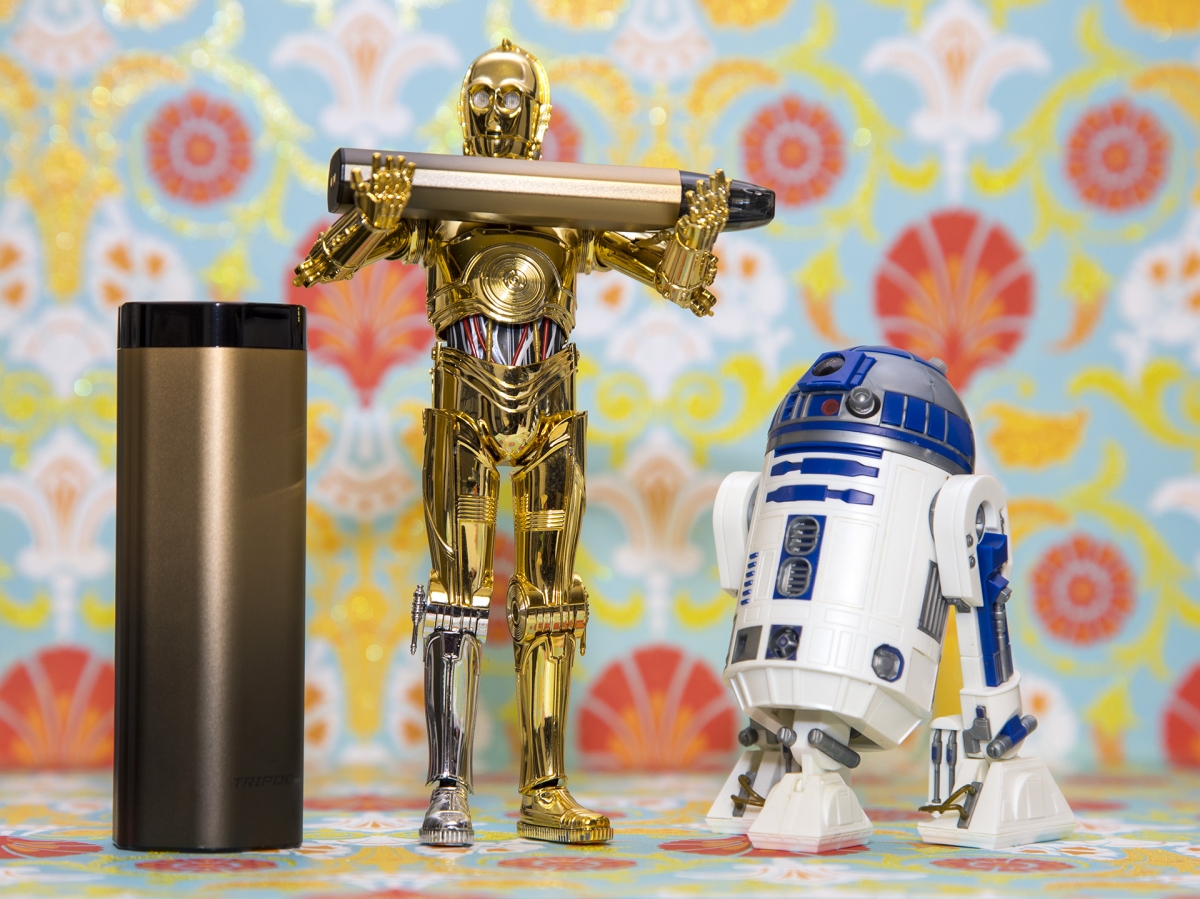 Due to me absolutely loving the vape from the pod system, I was starting to find the battery 350mAh size an issue, it last around 1ml of juice consumption. Since I tend to vape on and off most of the time, I found it too much of a faff to pop it back into the case in-between vapes so I ended up waiting for it to get well into the blue status. The pod charges in around 15 minutes but this meant I was without my precious pod for that long. I could pop it out again if I wanted but it was still a faff.

The solution would be simple but it kind of lead me to the first real negative about this kit for me, I would have been far happier with two pod systems (as in two pods/batteries) rather than one Pod system and two spare pods. I rarely found the benefit of having spare pods. It was nice to have three flavour options but I tended to stick with what was in it until it run out. Refilling is quick enough so I rarely shoved another pod in.

Some of this is down to my personal habits, I can’t see this being an issue for when you are out and about as the benefits of this kit will be more obvious as you use it to top up the charge while you’re not vaping. Sat here in lockdown, the benefits weren’t there for me.

After a few days use I started to come across the next issue, condensation/leaking. Sadly this problem is all too common in pods and usually the tighter the MTL draw is then the more prone it is to leaking and condensation. This is why there is a current effort by manufacturers to combat this.

I’m a little torn on this kit leaking, it isn’t a huge amount so I now inspect and give the pod a quick wipe now and then so it doesn’t build up too much. I can live with it as I personally think it is worth the minor effort and I am already in this habit with other pods, but it’s something you should be aware of.

As much as I LOVE the vape, I found it a bit shit as a camera tripod.

For the current price Sourcemore are flogging these for, it is a billy bargain. I’m not just plugging these for Sourcemore, I will very likely be getting another as I’m hooked on this little pod.

The tight MTL draw and flavour is one of the very best I have tried in a pod. For its size, it is remarkable and Uwell have nailed it.

Though you need to aware of the potential leaking issue, I didn’t find this to be a deal breaker and in my ongoing quest for the perfect MTL draw, I think it’s a small price to pay. That’s my personal choice and only you can decide if it’s worth it for you.

I am assuming UWELL will be releasing the battery sections separately which should hopefully be cheap enough, an extra will be invaluable.

I absolutely love how this little pod vapes and the tiny size really appeals to me. The charging unit makes it my pod of choice for out and about, I’m not going to include my niggle about the charging as it comes down to personal habits and it hasn’t marred my enjoyment of this kit. A little housekeeping and the chance of it leaking shouldn’t be an issue but if you’re anything like me, you will find the vape worth it.

For more reviews of the latest vape gear check out:
https://www.planetofthevapes.co.uk/reviews 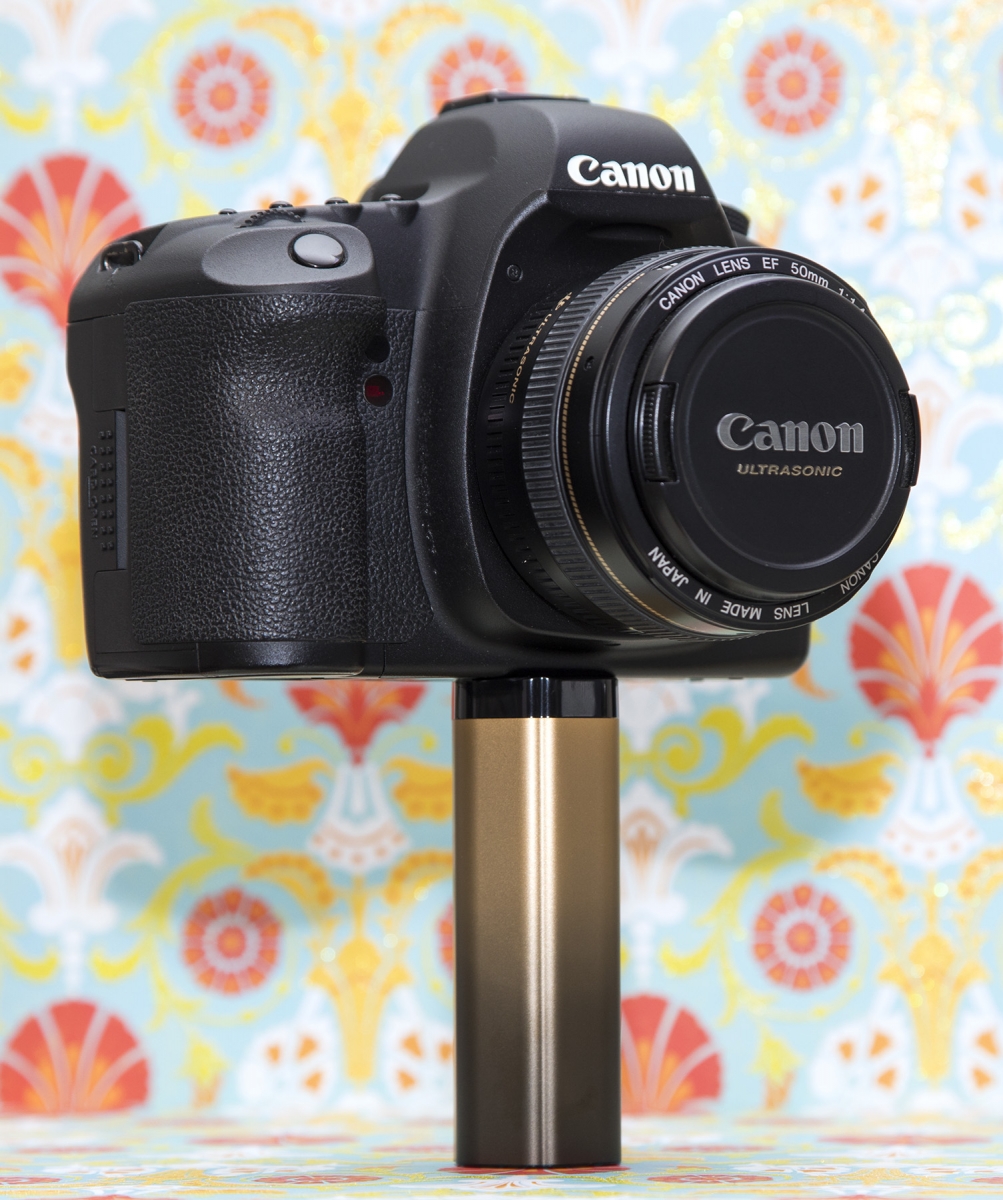