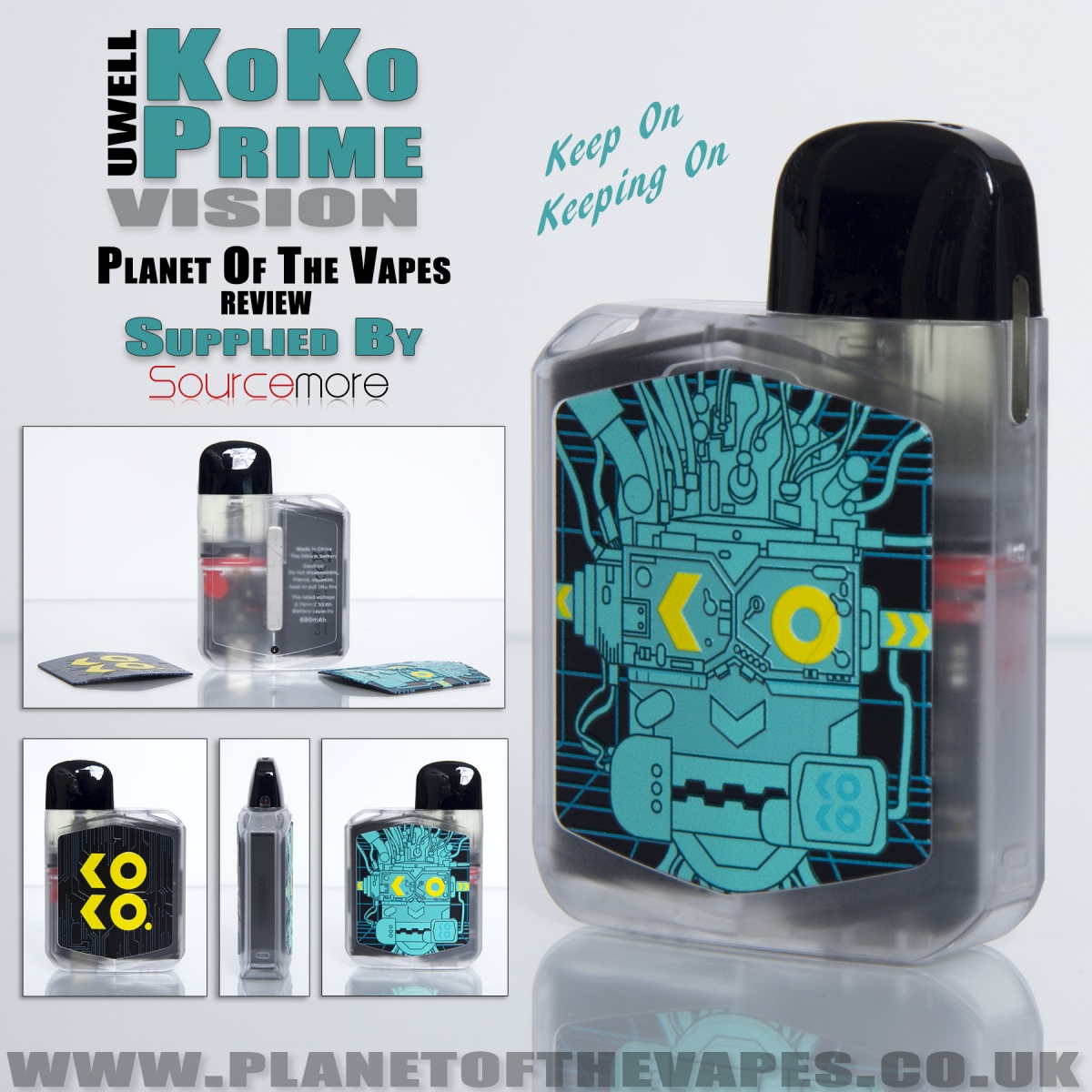 When the opportunity to review the latest version of the KoKo Prime came up. I pounced on it. I had tried the original version and LOVED the vape from it but it was a girly colour so I gave it away, the latest version is ‘Vision’ which is essentially the same but with a translucent body and quirky new panels.

The packaging is surprisingly large for such a small pod. There’s a transparent outer sleeve and a layered inner box, the top layer holds just the pod kit.

Underneath that are the extras including; a diddy USB-C cable, a spare coil, a document wallet, and a very handy lanyard.

Perhaps a contradiction, it looks chunky but it is really compact and very light-weight. The all new translucent body looks great, but I really like the new panels which are almost comical with the loopy robot face on one side and the cyber embossing.

In my imagination I felt the design came out of something like Rick & Morty and it is a far cry from the normal style of vapes. For sure, it will be an acquired taste but even if you don’t like the quirky style then there’s always the original KoKo Prime which has a more contemporary look.

The panels are removable and are also interchangeable so you can swap sides or you can buy optional ones if you wanted to customise the look. They are held in place with magnets which are very strong, so there’s almost no chance of these accidentally coming off.

With the panels removed, you get to see the KoKo’s guts, I’m the type of person that likes to see what makes things tick and I often take stuff apart just to see how it works, so the translucent body appealed to me. There’s not a great deal going on inside, but there is a compact 690mAh battery which appears to be a custom wrapped one with Uwell branding, and there’s the little chipset with a charging port and an on-board LED light which lights up as you take a draw. You can see how Uwell have sealed the pod base to prevent any juice leaking damage, and the large magnets are also visible so you can see why these are so strong as they are long bars. 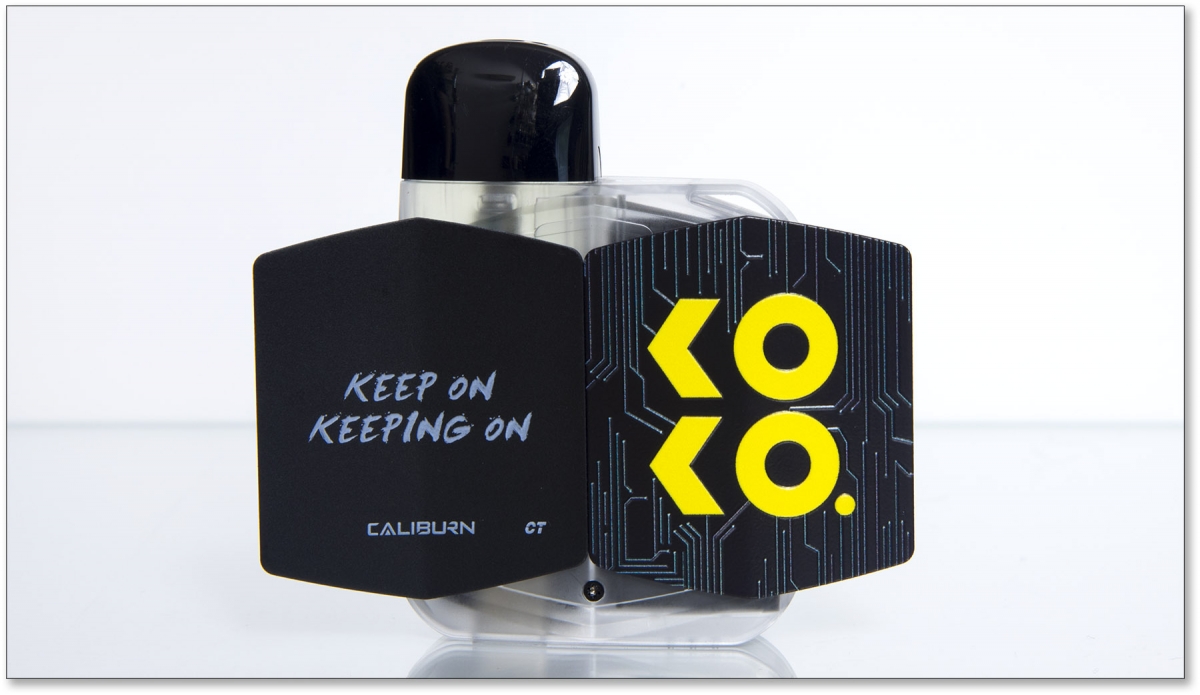 On the inside of the panels is the ‘KEEP ON KEEPING ON’ logo, I paid no attention to this on my first KoKo and didn’t know what KoKo stood for, but I’m quite a Northern Soul fan so this logo has extra meaning for me as there is a famous soul song with the same title.

The pod is a press fit and pulls out easily and is held in place firmly so it won’t fall out. The coil is replaceable which is far better than the wasteful disposable pods. The coil is worth talking about as Uwell have really nailed MTL coils. The main thing I noticed was the generous wicking ports which really help to prevent burning or dry hits. This also prolongs the coil life as well as providing a full bodied flavour, a small part of the kit but a huge part in what makes the KoKo special.

The pod is a top-fill design where you flip the lid off to expose the fill port. It accepts the standard 10ml bottles perfectly and seals the nib as you fill it up, plus there’s a small breathing hole on the opposite side to prevent air locks but you need to fill it while it’s upright otherwise it will leak out of the hole. Generally I found it very easy to fill and see the juice level. You can fill it up with the pod still fitted into the battery, but I found it easier to handle by removing the pod. 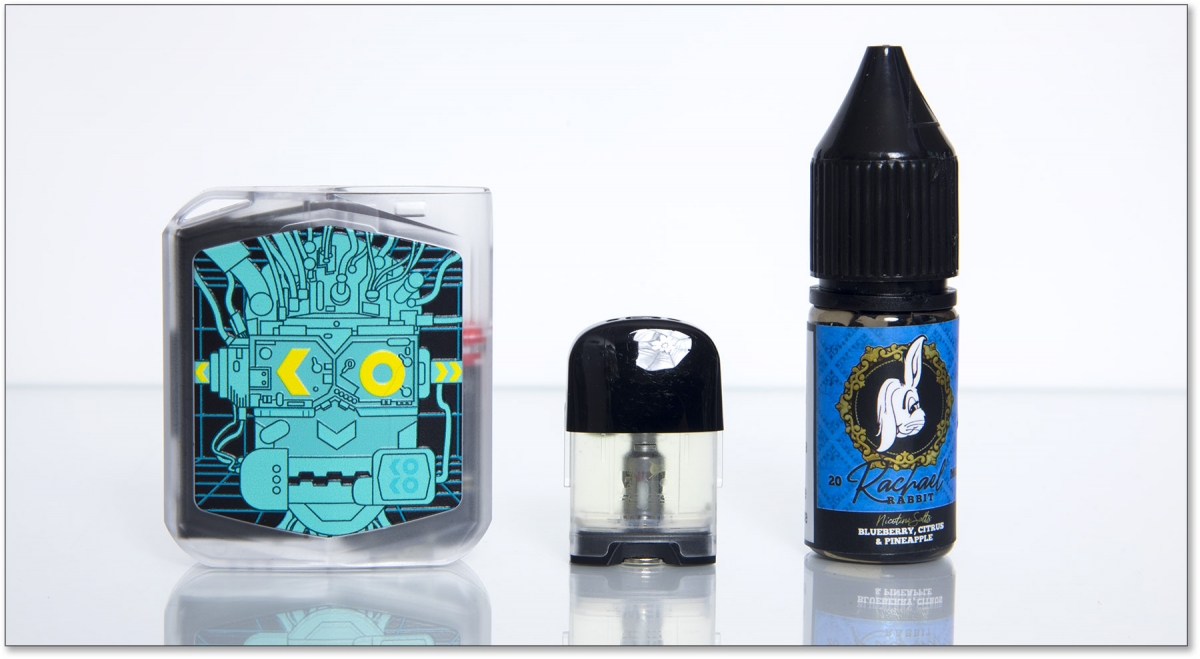 Pay attention when fitting the pod as it features a dual airflow option which depends on which way you fit the pod, one side has a very restrictive direct lung (RDL) or a sloppy mouth to lung (MTL), and the other side is purely for MTL and offers a fairly tight draw, not the tightest I have tried but more than satisfactory.

Using DeeDee’s MTL Draw-ometer scale (0 being tightest and 10 being sloppy).

There are none, it is solely (or soul-y) an auto-draw device and performs flawlessly. The only draw-back (pun intended) is that the device is in an ‘always on’ state and there’s no way of turning it On/Off, so the safest way to store the device is to remove the pod to close the circuit. 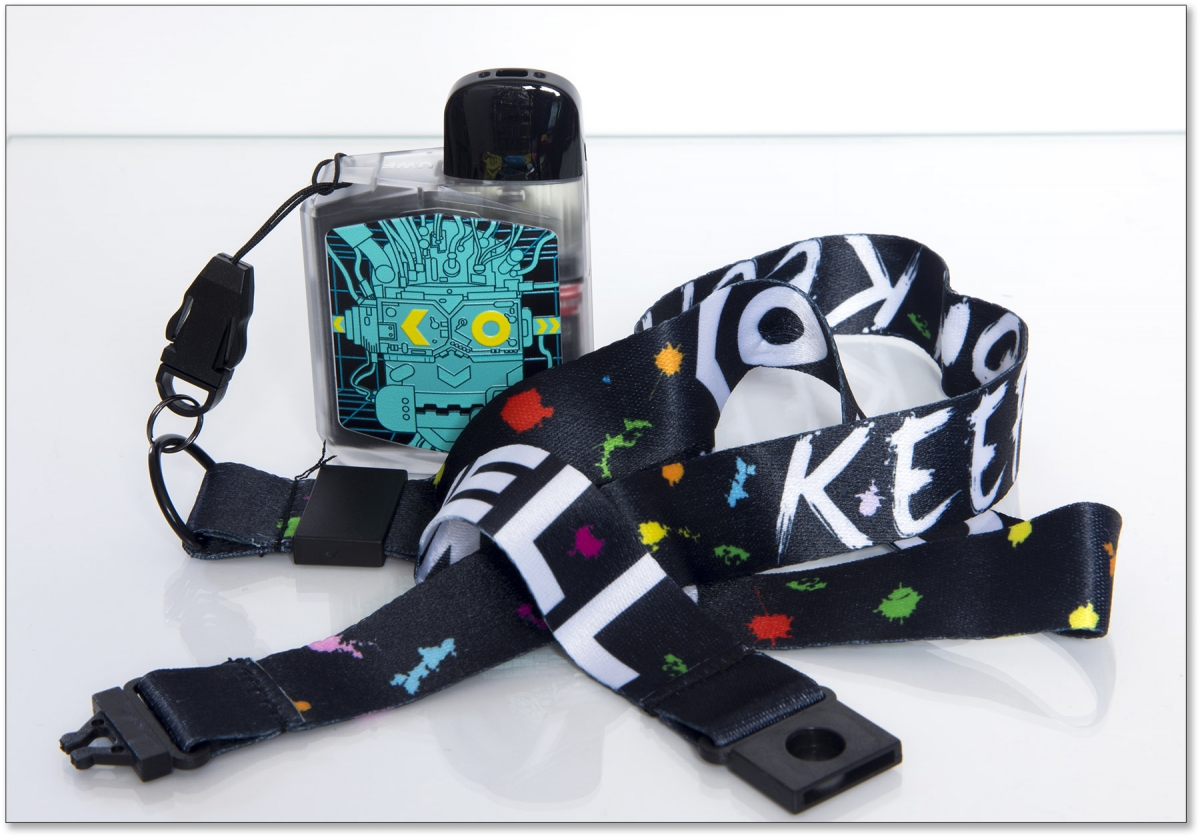 The KoKo is a ‘Prime’ example of a perfect wearable pod on a lanyard, and the addition of the lanyard in the kit is very welcome. However the style is a bit loud to say the least, and although I appreciate the funky panels, I found the lanyard wasn’t to my tastes. That said, I can see the appeal for others, I picture people wearing stuff like this at gigs and festivals etc. But for me, I soon swapped it for another skinny plain lanyard that I already owned.

I’m not one for wearing a lanyard for the sake of it or as a ‘I’m a vaper’ badge, but I find them really useful, especially when on my Vespa at traffic lights or in the car. There are many pods that accept a lanyard, but few that are as lightweight or convenient as the KoKo, especially this VISION version.

Onto the reason I was keen to review the KoKo; the performance! I originally tried the KoKo a few months back at the time of reviewing some already amazing pods such as the Vaporesso Lux Q and the Joyetech Evio C, but the KoKo Prime still surprised me with the incredible flavour it gave. The nature of the large wicking ports means that you get a really saturated vape every hit. Both coils performed similarly to each other and I have no preference to which I buy, this is unusual as I normally opt for above 1.0Ω though I did find the 0.8Ω lasted a little longer but at the small price of battery life.

The only thing I think it’s worth adding about the 1.0Ω coil is that it is probably the best flavour and lifespan I have ever tried over 1.0Ohm.

690mAh isn’t that large these days but it lasted a lot longer than I expected. I tend to use 20mg nic salts in mine and it would last around 4ml before I really noticed the power dropping off, this might not sound like much but I am used to others only lasting 2-3ml so I was more than happy with this. Charging time was reasonable, it is USB-C and charges at 1.6 Amps which is pretty fast for such a small device and I rarely waited above 30 minutes from the first low state warning (Red).

The internal LED lights up as you draw, and the colour indicates the battery status:

I’m a little torn about the LED lighting up as you vape. Since the body of the VISION is translucent, then you see a broader light which is quite noticeable to onlookers. This isn’t ideal if you’re trying to stealth vape but for those who enjoy lighting effects, it should appeal. My cat, for example, she likes to whack my KoKo when it lights up – grrrr! 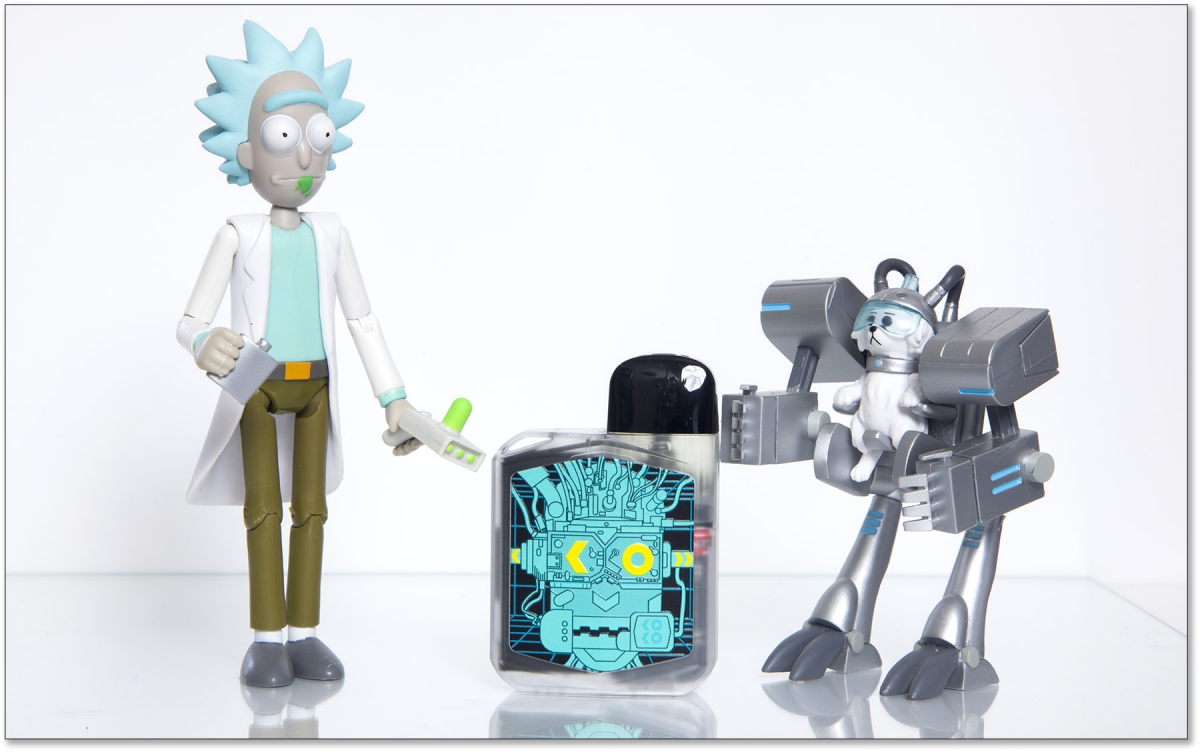 The above cons are far from deal-breakers, I almost feel mean for picking any as I LOVE this device and it is easily in my top 5 pods to date. The vape is simply superb, and on a lanyard it hasn’t left my neck. I’m not going to include the loud included lanyard as a con because it is part of the VISION's style.

The highlight of the KoKo Vison (and the original) is the quality of the vape, full bodied flavour and surprisingly dense vapour production is going to be hard to beat. If you like how the KoKo looks, then I will be amazed if the performance doesn’t more than satisfy you.

All I know is that I will ‘Keep On Keeping On’. 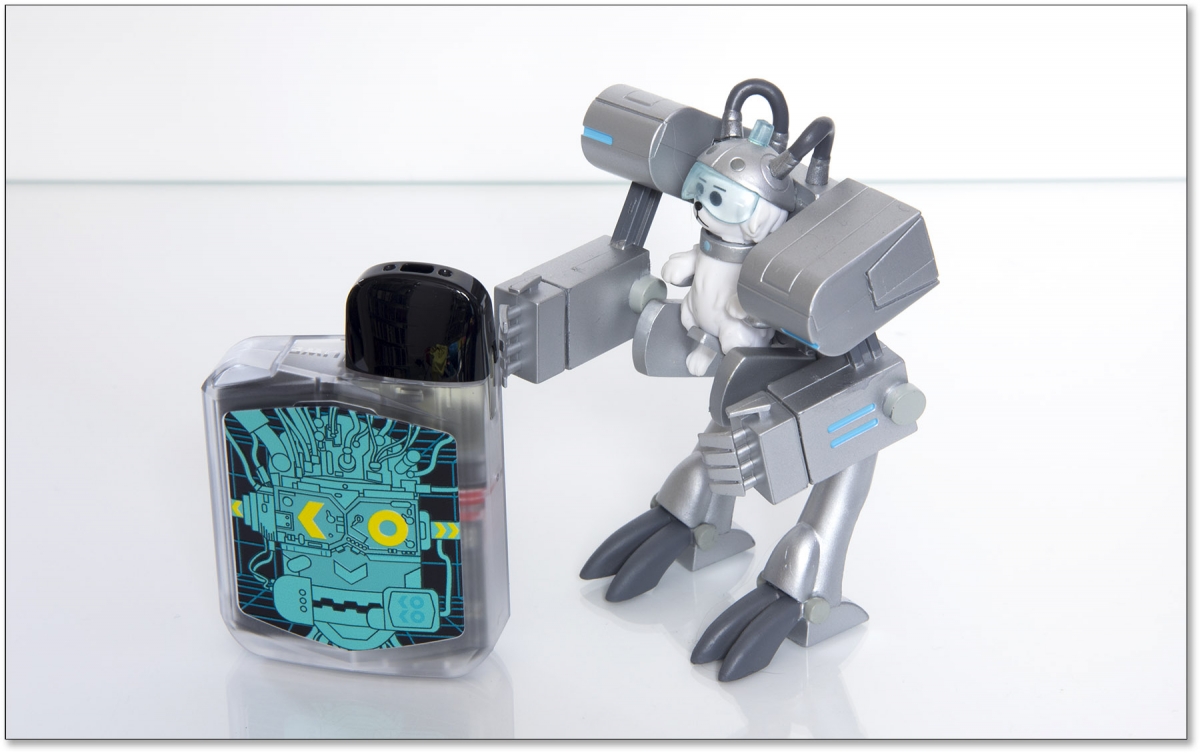