Teslacigs, once better known for for their dual battery PWM devices like the Invader series, seem to have been concentrating more on the pod mod market of late but when they asked us to look at their latest entry, the T-REX, I thought it had enough different features to warrant a closer look.

The sample provided is the international release, however in the EU TPD region it will be sold as the T-RX, presumably due to some sort of copyright/trademark already being assigned to that name, and aside from a smaller 2ml pod, it is otherwise identical.

The T-REX is available in five different colours (gun metal, rose red, turquoise, coffee gold, and black), and even the box colour is different so it’s easy to determine which colour you’re purchasing. Teslacigs sent out the rose red, and the gun metal, pictured above, which came in a dark grey box. I largely used the rose red one for photos but settled on using the gun metal version in the end. Inside the box, there’s a cardboard sleeve showing all the colour variants which holds the manual and a couple of information cards. Lift this up and the rest of the contents are neatly laid out in a single layer foam pad. Hidden inside the T-REX there’s an 18650 adapter, yes this is a 21700 battery pod mod! 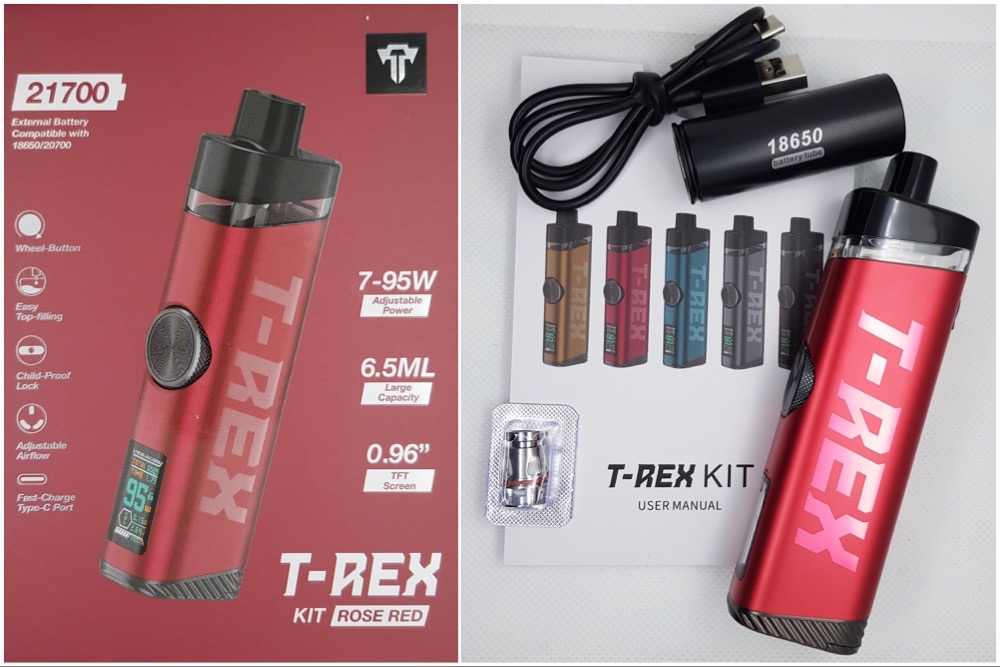 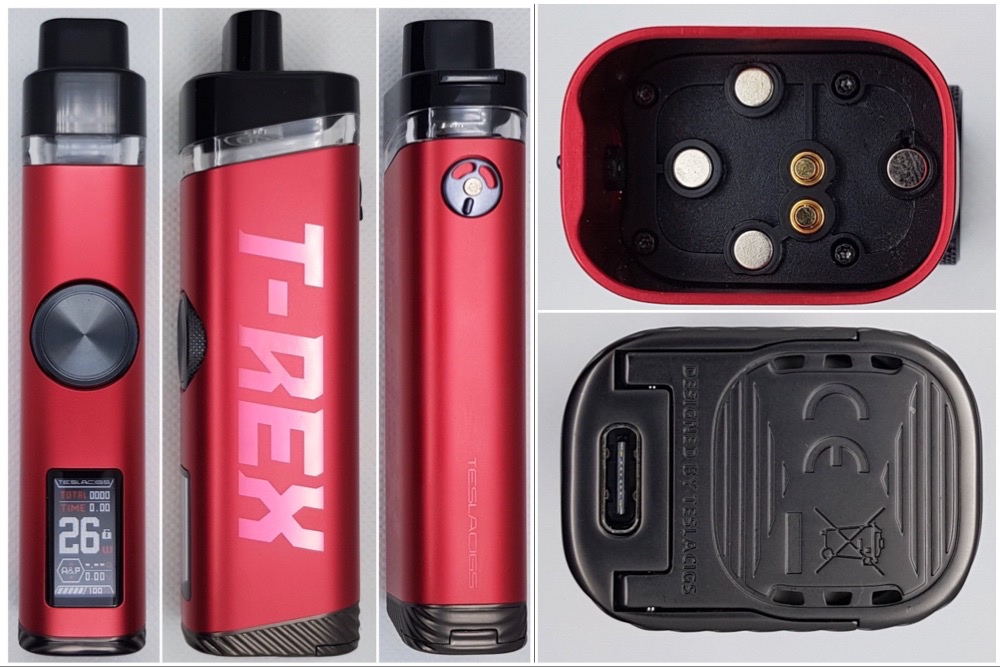 Although tall for a pod mod at 125mm, it’s actually pretty small when you take into account the 21700 battery. I have 18650 pod mods that aren’t much smaller than this. The largely aluminium alloy construction means that it doesn’t feel like you’re holding a lead pipe in your hands either, which makes it comfortable to carry around all day.

The coloured aluminium chassis has a large T-REX logo down either side and a smaller Teslacigs logo down the back. The logos are all done in a mirror finish which unfortunately means they’re a bit of a fingerprint magnet, but the overall finish looks and feels good. I did notice some wear marks on the inside of the battery door on the red model, the gun metal one seems fine though. This could be down to these being early/pre-production samples so hopefully the finish will turn out to be durable. 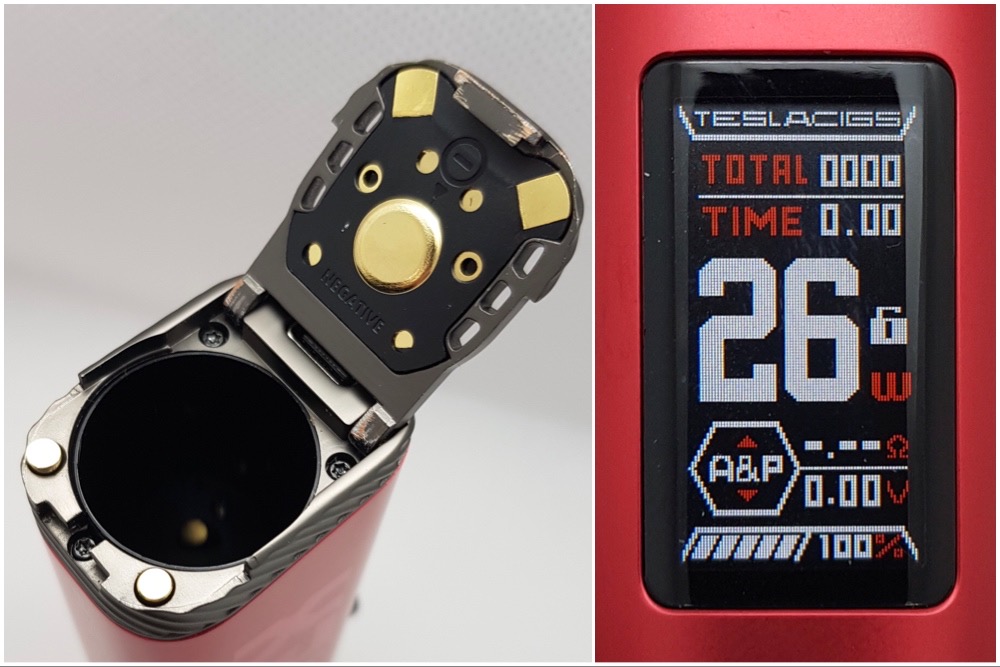 The battery door is well labelled and it’s nice to see two large spring loaded contact points being used here. This aids in keeping the battery door closed and should make the battery contact more reliable (there have been issues with similar systems previously where only one small spring loaded pin is used). The inner battery sleeve is plastic and there’s a spring loaded positive contact at the base of this to take up any battery slack. This easily accommodated my oversized Vapcell 21700 batteries which frequently defeat other mods, in fact oversized batteries may even be preferable here as with a Samsung 30T, I could occasionally feel the battery shifting around in use. The same battery movement can also be felt with 20700 and 18650 batteries.

Once your battery is inserted, the bright 0.96” TFT colour screen springs into life. The information is well laid out and easy enough to read outside. I particularly like the large wattage display as I can even read this without my glasses. Everything is controlled by a single dial button on the front of the mod, simply press to fire or rotate to make adjustments, and this has been excellent in use although I feel the position could have been a little better thought out, it feels too low down. In the thumb firing position, it’s not too bad but you have to be mindful of the adjustable airflow on the other side as I often find my finger naturally comes to rest here. Trigger firing feels better, but I feel like the drip tip on the pod would be better if it was rotated 90 degrees and I have to rotate my wrist into a slightly awkward position instead. You can of course use the autodraw feature which is hidden near one of the magnets in the pod recess. There is a noticeable delay with this though, possibly due to it being on the opposite side to the adjustable air intake on the back of the mod, so I soon turned this off.

Three clicks of the button will take you to a series of sub menus to change various behaviours, and two clicks will lock the rotation feature so that you can’t accidentally change the wattage. Two wattage modes are available, variable wattage which sets and limits the wattage available according to which coil you have installed, and DIY which unlocks the full 95 watts, and an additional bypass mode. Frustratingly if I set and lock the wattage to anything other than the default suggested wattage, the T-REX will frequently, and seemingly at random, return to the default suggested wattage which gets annoying very quickly. It even displays the same behaviour in the DIY mode as well, and this is one area that I hope Teslacigs can address with a firmware update, at least give us one mode where the wattage I select isn’t going to change at random!

On the base of the T-REX there’s a usb-C port for charging which Teslacigs claim charges at 1.2 amps. In my test, it peaked at about 0.99 amps and whilst the T-REX got slightly warm, it wasn’t excessively so. This is probably aided by the aluminium construction of the main chassis acting as a radiator/heat sink. 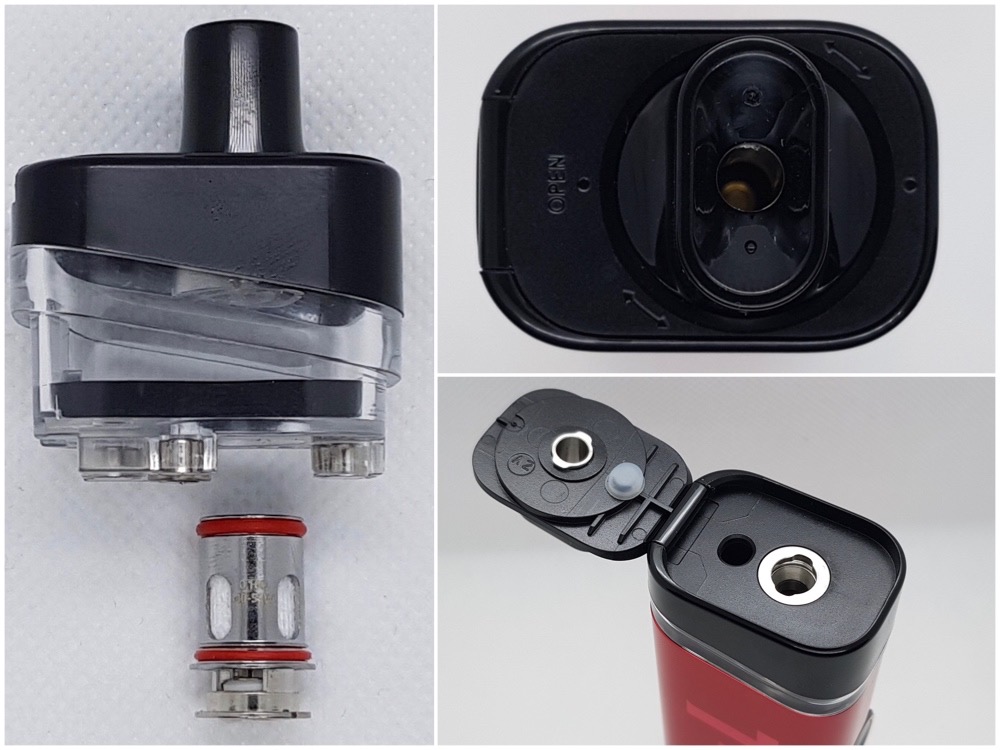 The pod uses coils which are push fit from the bottom and holds a staggering 6.5ml of eliquid in this international version (2.0ml for the EU/TPD T-RX). There’s also a rather unique child proof filling method with the built in mouthpiece acting as a lock, push down on the mouthpiece and rotate it 90 degrees and you can now lift the top up to reveal the fill port. This has been a joy to use and although I’ve had liquid collecting under the lid, there have been no leaks. The clear sides also make it easy to see how much liquid you have left as well. This is held in place by four powerful magnets and easily passed the shake test, so you should have no issues with losing pods in pockets and the like.

Two coils are supplied in the box, a T-P5 0.16Ohm mesh and a T-P4 0.3Ohm mesh. These are both direct lung coils but several other coils are available including two that are aimed at mouth to lung (MTL). I believe all the coils are Ferrochrome (Fe-Cr) alloy coils (50 to 70 % chromium with the remainder being Iron), so should be good for those of us with nickel intolerance to use, all wrapped in organic cotton. 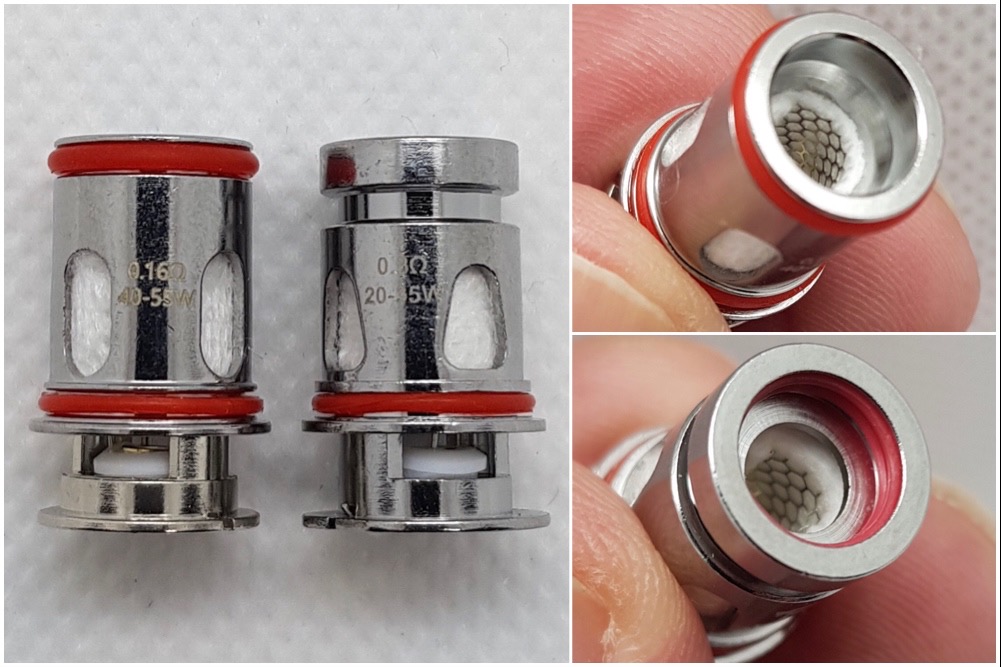 If the coils look somewhat familiar, that’s because they are the same size as Voopoo PnP coils (and possibly vaporesso gtx ones but I don’t have any to check), but the question is how do they perform? Exactly the same as Voopoo coils. If you’re happy with those then you’ll be right at home here. The adjustable airflow ring on the back of the T-REX mod helps out here as well, enabling you to dial in your desired vape. These have been surprisingly leak free as well, which is an added bonus.

Teslacigs were also kind enough to send out the optional RBA-P1 coil head and 510 adapters. 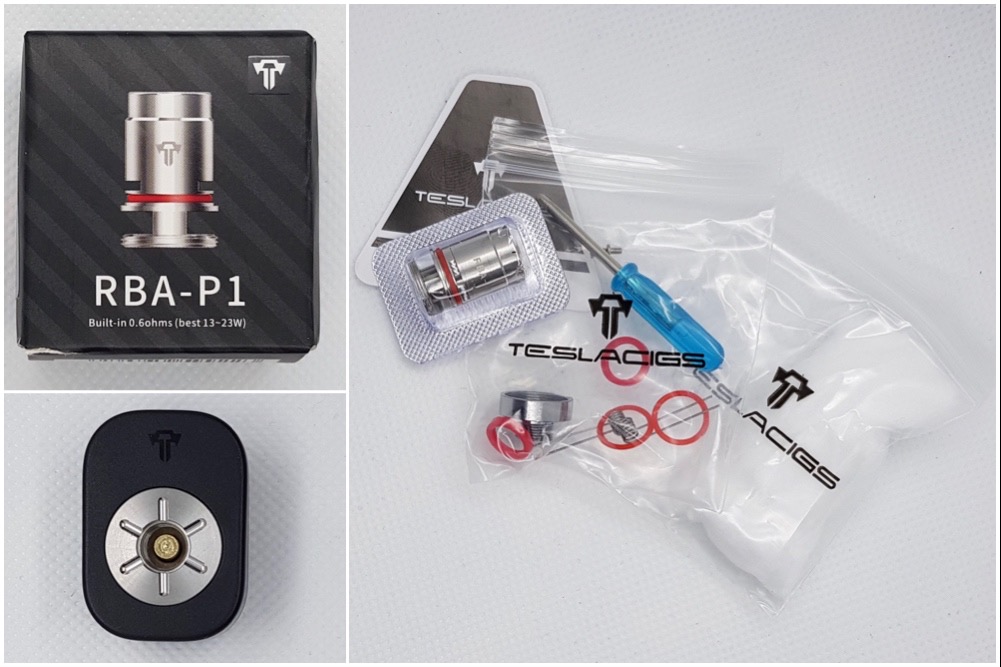 The 510 adapter can be used in place of the pod and transforms the T-REX into a fully fledged box mod. It features a spring loaded 510 pin and can accommodate up to 25mm atomizers. The edges are very slightly bevelled at the top though, so it looks slightly more natural with 24mm atomizers. Unlike many other pod mods which max out at 4.2 volts with no buck/boost features, the T-REX outputs up to 8.5 volts, which make this much more practical to use as a box mod. The automatic suggested wattage feature rears its ugly head again though, frequently resetting the wattage which is a shame.

The RBA-P1 actually comes with a fair bit in the box besides the RBA head itself. There’s a 510 adapter so you can dry burn your coils, a couple of pre-wrapped coils, spare o-rings, blue screwdriver and some organic cotton. The supplied round wire coils have a 2mm id and appear to be kanthal or Fe-Cr as they are magnetic.

The build deck is quite small as you might expect, and has a 2~2.5mm air hole under the coil. The posts have tiny holes for your coil legs and I could immediately see a problem in inserting the coil as they’re both closed holes rather than slots. Luckily my experience with smaller rba sections from a few years ago came in handy here. I added half a wrap so that both coil legs were pointing in the same direction, and then put a small 90 degree bend at either end to put them through the post holes and then dragged them through before tightening down the screws. Obviously you’re going to need to make sure your coiling rod is in place throughout this process or you’re going to destroy the coil, and I’m not sure I’d like to attempt this with anything other than a simple round wire either!

Once done, this came out to 0.61Ohms and the T-REX suggested 23 watts which turned out to be about right. For wicking, I cut the cotton at the edge of the deck and used the partial dam method which seemed to keep up fine. The flavour is okay but not a patch on the mesh stock coils, and a small clapton would probably help here but I’m not sure I’d like to attempt this with anything other than a simple round wire! 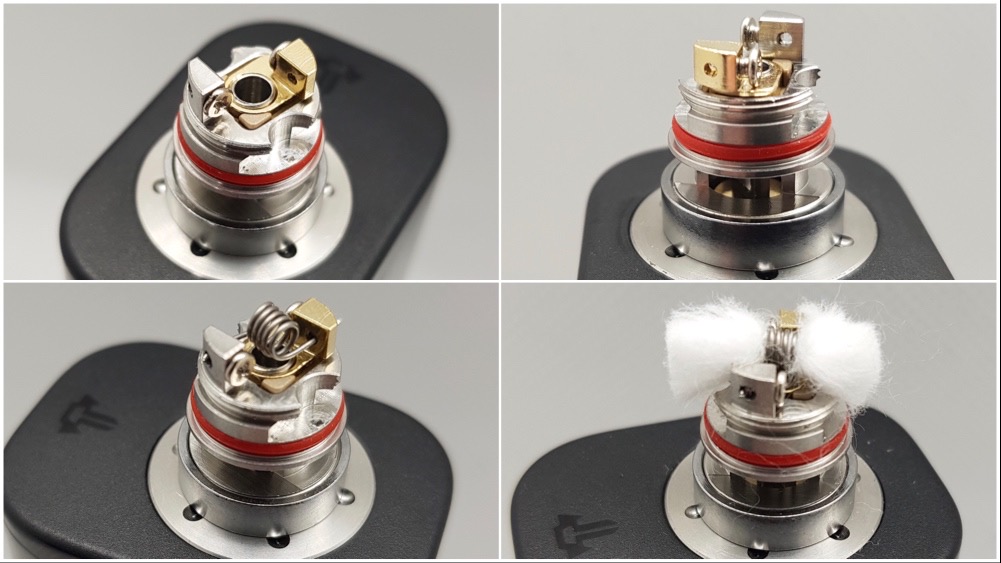 This is quite attractive as either a pod mod or a fully fledged mod with the optional 510 adapter. The 21700 battery and 8.5volt output make it a much more practical proposition to use as a mod as well. Whilst the button placement would possibly feel more natural if it were a little higher up, you soon get used to this so it’s only a minor niggle. I’m hoping that this is firmware updatable as turning off the automatic suggested wattage in DIY mode would make for a much better experience overall.

Many thanks to Teslacigs for sending the T-REX kit out for review. 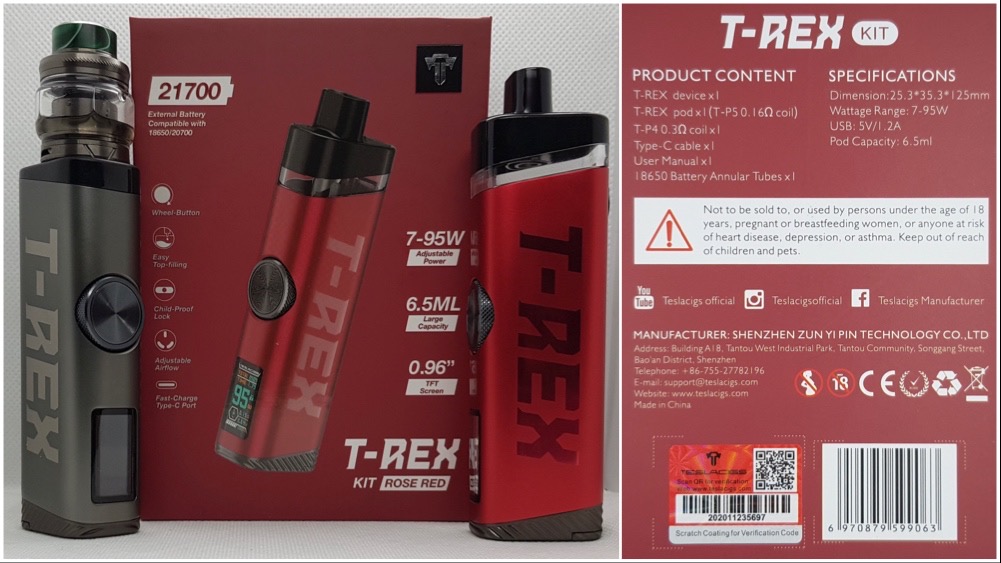