Today for review we have the SMOK Nord 4 which was kindly provided to me by UK Vapesourcing.

I’m sure most vapers will have heard of SMOK, they have been around for a while now and have a reputation for producing some high wattage tanks and mods. The Nord series has proved pretty popular with the Nord, Nord 2, Nord X and now the Nord 4, it seems they have been taking advice from how Microsoft name the Xbox series. Nord comes from the Scandinavian for North and Smok means Dragon, so this is the Dragon of the North! Will it be straight fire or will it just disappear in a puff of smok(e)? Let’s dive in…

The packaging itself is pretty standard and contains the device, two pods (one for the RPM coil and one for the RPM2 coil), USB-C charging cable, user manual and warranty card. 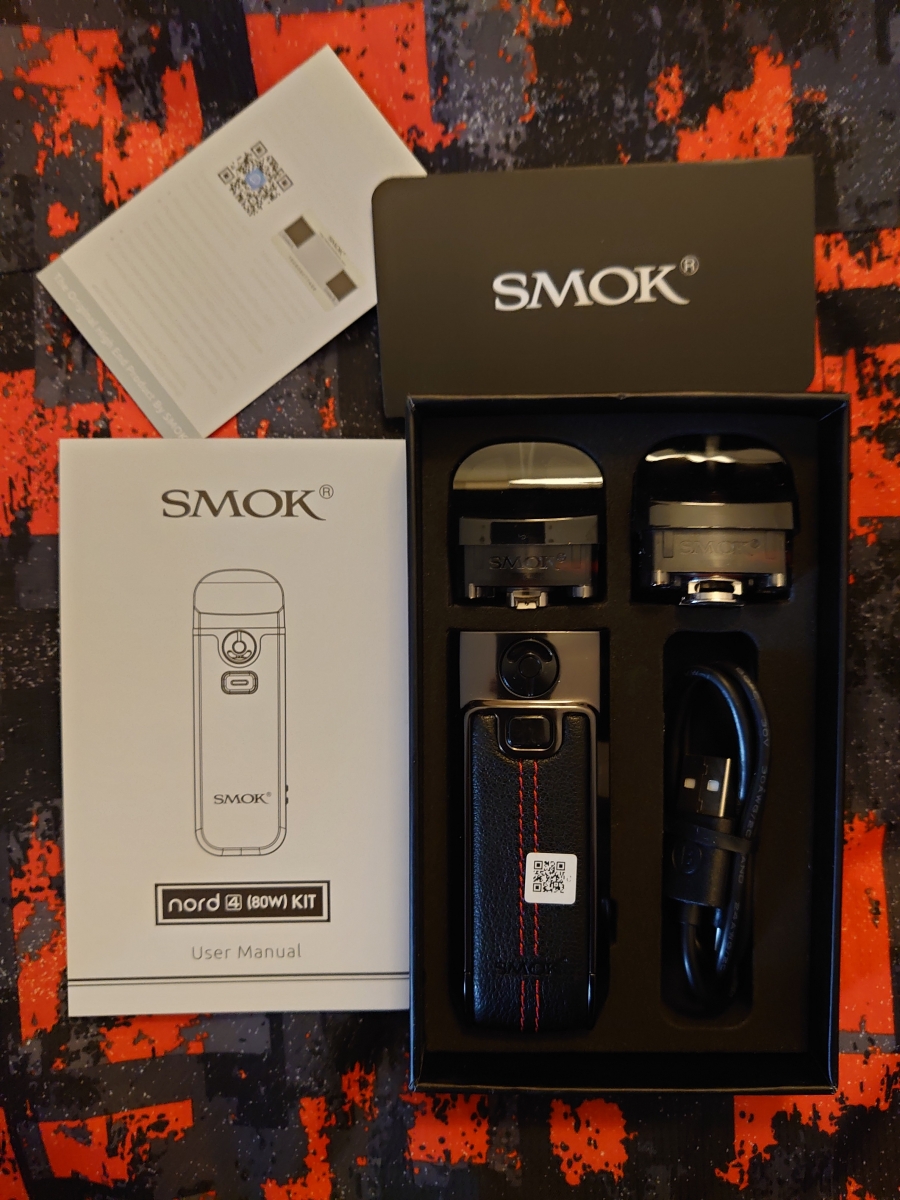 The essential specs are:

For a full list of the specs and all the protections, you can see them here

The coils supplied with the kit are:

Each of the coils come with it’s own dedicated pod. You can determine which pod is which by the fill port bung. On the bung is either RPM or RPM2 to differentiate between them. They look identical so this is the only way to tell the difference, it’s a bit confusing and would be better if there was just one type of pod or there was an easier way to tell which is which. The bung on the pod is nice and secure, and the fill port is large enough to cope with larger nozzle bottles. There are four strong magnets on the bottom of the pod which hold it in place in the top of the device, and it snaps nicely into place. It sits in nice and tight. The coils have two grooves on the bottom which need to face across the length of the pod and they slide nicely into place, you can get them out with a good tug but they never feel loose or like they will come out. The pods are darkly tinted and this makes it difficult to see your liquid level in low light. The mouthpiece on the pods are duck-billed but seems like they are from some sort of Godzilla duck as they are pretty big, and if you have a small mouth it might feel uncomfortable. 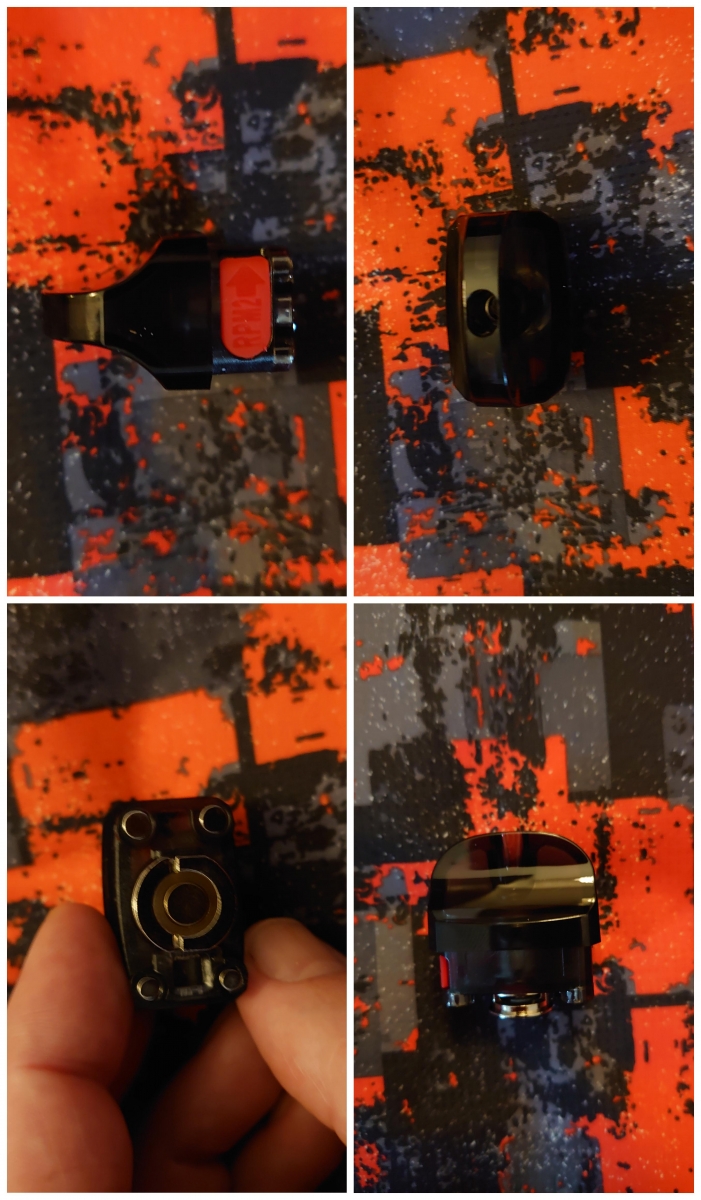 The device itself is heavier than I was expecting, but with that comes a sense that it’s sturdy. It can definitely take a fall as I’ve dropped it onto hardwood flooring and there’s not a scratch on it. I like the way it looks and the way it feels in the hand, and the leather adds a nice classy touch to the aesthetic. The screen is on one side with two small buttons which are the wattage up/down buttons.
The screen itself is on basic side really, showing the wattage, ohms of the coil, voltage battery percentage, and puff counter. The puff counter only goes up to 999 then it resets to 0 or you can reset it manually by pressing the down wattage button and the fire button together. When the fire button is pressed, the screen will change to a puff timer but unless you’ve got the hand speed of the Flash, you are never going to see it as it disappears almost the instant you let go.
You can lock all the buttons by pressing the fire button three times. This locks the wattage and the fire button which seems a little pointless to me as this is just like turning the device off altogether. It would have made more sense to have this function lock the wattage buttons but still have the fire button available.
The USB-C charging port is on the bottom of the device which fits the aesthetic, but it’s tricky to actually get the device to stand up so most of the time when not in use, it’s easier to lay it down.

On the front of the device you have the fire button and one of the airflow wheels with the other airflow wheel on the back. The fire button is soft to press and fires instantly, but it’s a little on the small side for my beautiful big hands (see picture below). Now to the airflow, the wheels on either side spin to reveal the ports and can be operated independently to give a decent amount of air, turn them clockwise to tighten and anti-clockwise to open it up. 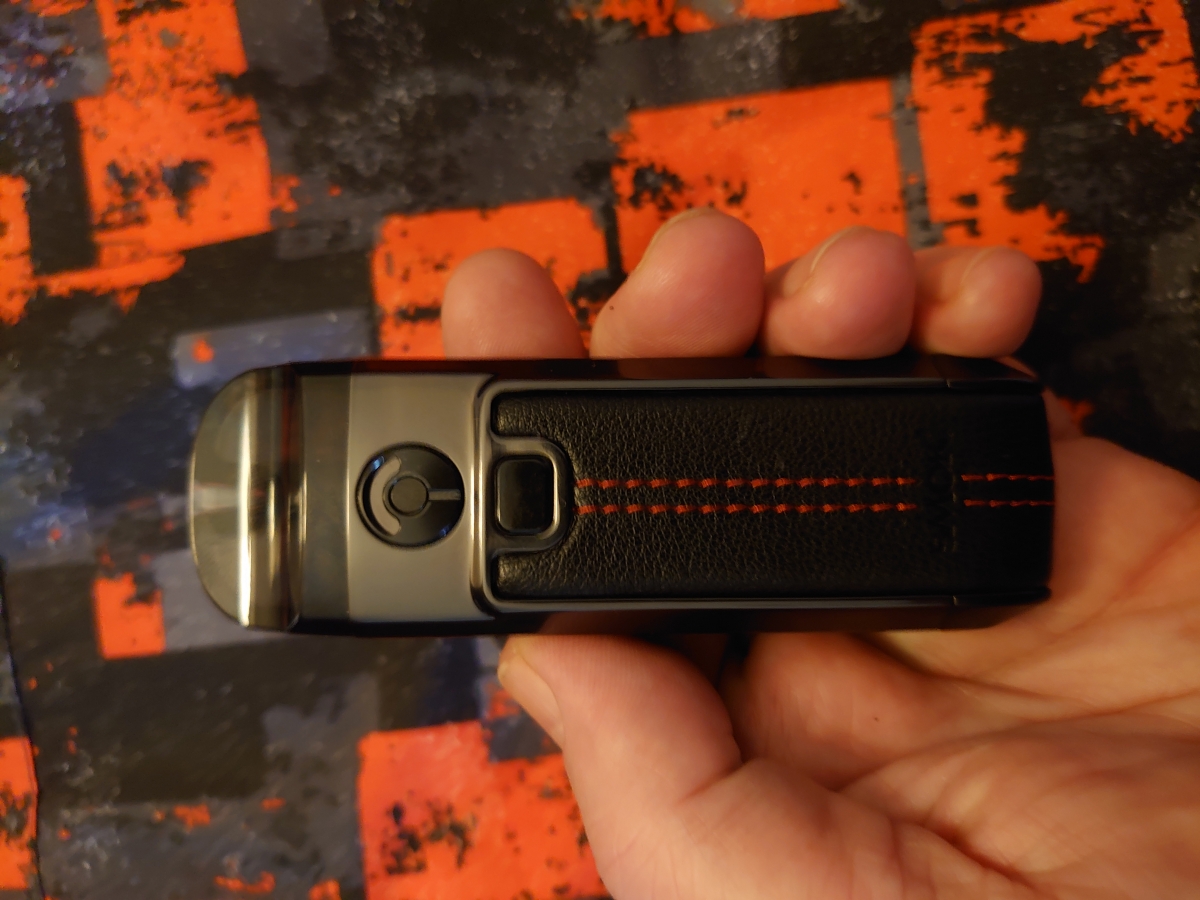 Fully charged and loaded with Unicorn Shake, I tried the 0.4ohm coil. This coil is rated at 25W, that’s it, just 25W, no wattage range. Airflow wide open, there’s a bit of restriction with this coil and the flavour is just not there at all. Restricting the airflow seems to improve the flavour a little, but no matter what I tried I never got above average flavour with this coil. I actually found it best it 30W with one airflow wheel shut and the other open a quarter. This gave a nice warm vape with a decent amount of restriction, but still the flavour was just average. The airflow is a little on the loud side but it provides a nice, smooth, lovely draw. Let’s make this clear though, you will not get an MTL draw from this. Even with the airflow shut off, it’s just way too loose more of a tight RDL but definitely not any kind of MTL draw.

I switched the pod over to the RPM2 pod and again filled with unicorn shake and tried the 0.16ohm coil (rated 25W–50W). You can instantly tell there’s more air getting through this coil and the flavour is definitely better here. You can open it up so there’s plenty of air and tighten it down to a tight RDL draw and everywhere inbetween to suit your tastes which is impressive for a pod device. I bumped the wattage up and up, and for me this coil worked best at 47W with one airflow wheel closed and one half open giving a warm restricted vape with good flavour and a decent sized clouds. 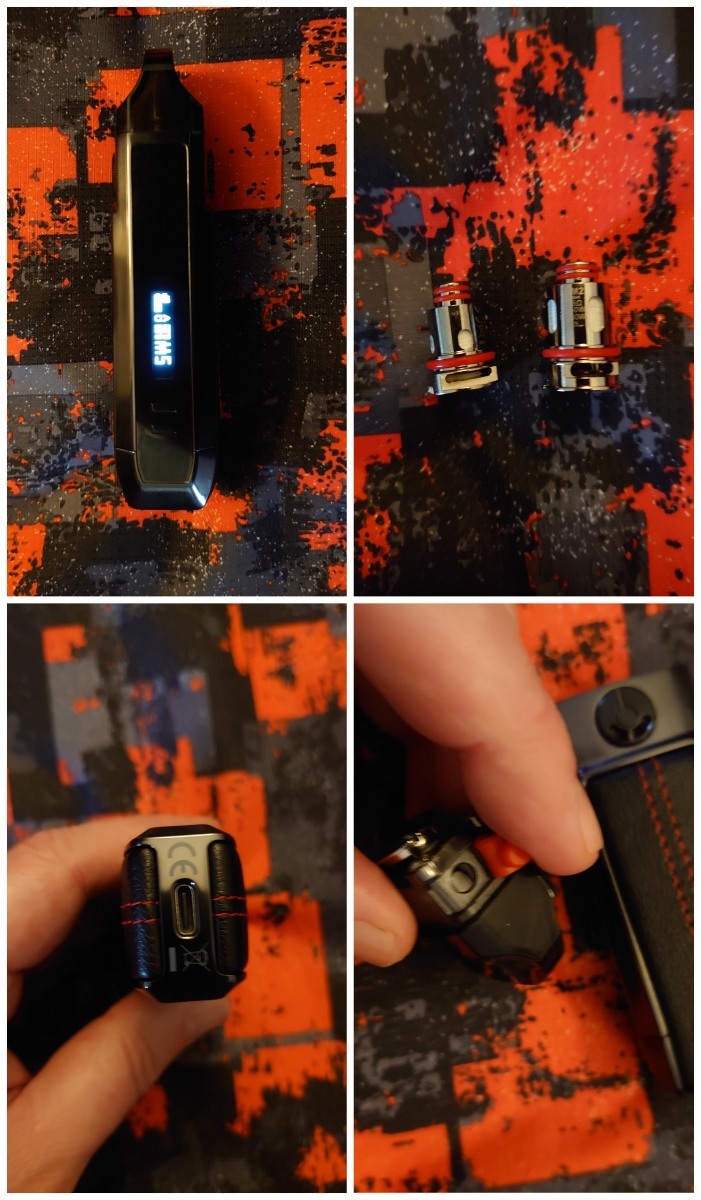 When you get the Smok Nord 4 in your hand, you’ll notice it’s really well built, feels good and is simple to start up and operate. The RPM2 coil/pod gives good flavour and a nice smooth vape with the ability to tailor the airflow to suit most tastes. The device charges in about 80 minutes from flat, and when you put it on charge it actually gives you an estimate in minutes which is a nice touch. The battery itself, especially with the RPM2 coil will struggle to get you through the day. At 47W, I got roughly 180 puffs at approx. 3 seconds a puff, and with the RPM at 30W at the same length, I got roughly 270 puffs. The battery doesn’t like going below 15% though, and as soon as it reaches that level, it goes down more easily than Harry Kane when he’s touched in the 18 yard box. Mine tended to go from 15% to 3% in no more than three puffs.

The pods are too darkly tinted, the mouthpiece will be uncomfortable for some as it’s big, the RPM coil/pod is pretty average, and the lock function is pointless. The pods get some condensation under them but I’ve not had any actual leaking, and I’ve used each of the coils for a week solid and they are still going.

There’s no doubting that the Nord 4 is designed to be a portable pocket rocket and to give DL/RDL vapers the chance to blow decent clouds on the go, and that’s exactly what it does. There are some niggles with the pods and the device but nothing major, and I would struggle to recommend the RPM coil. The RPM2 coil gives good flavour, a nice clouds and the device is portable with a decent enough battery life and a good coil life. For me, this device is the very epitome of “good” without ever excelling. On a dragon’s scales? About a 7/10. 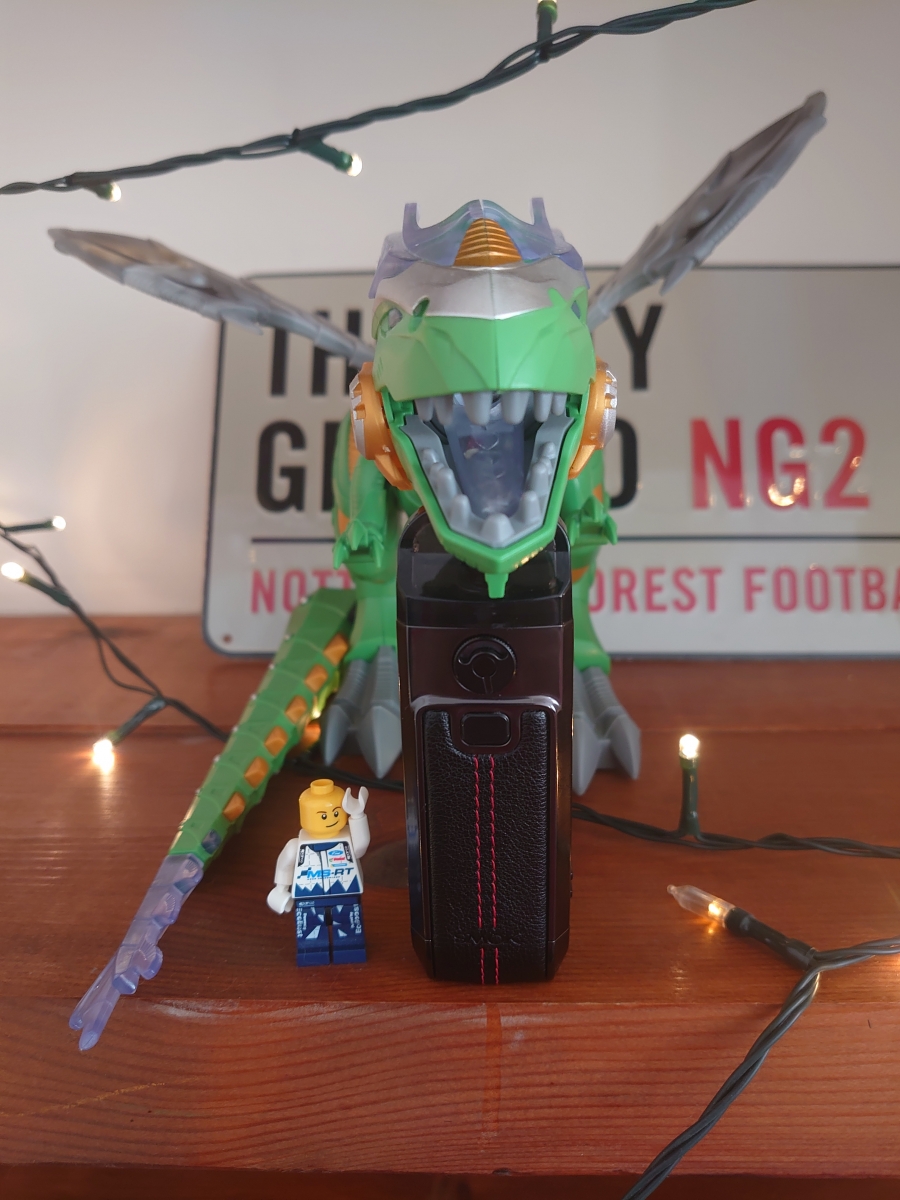