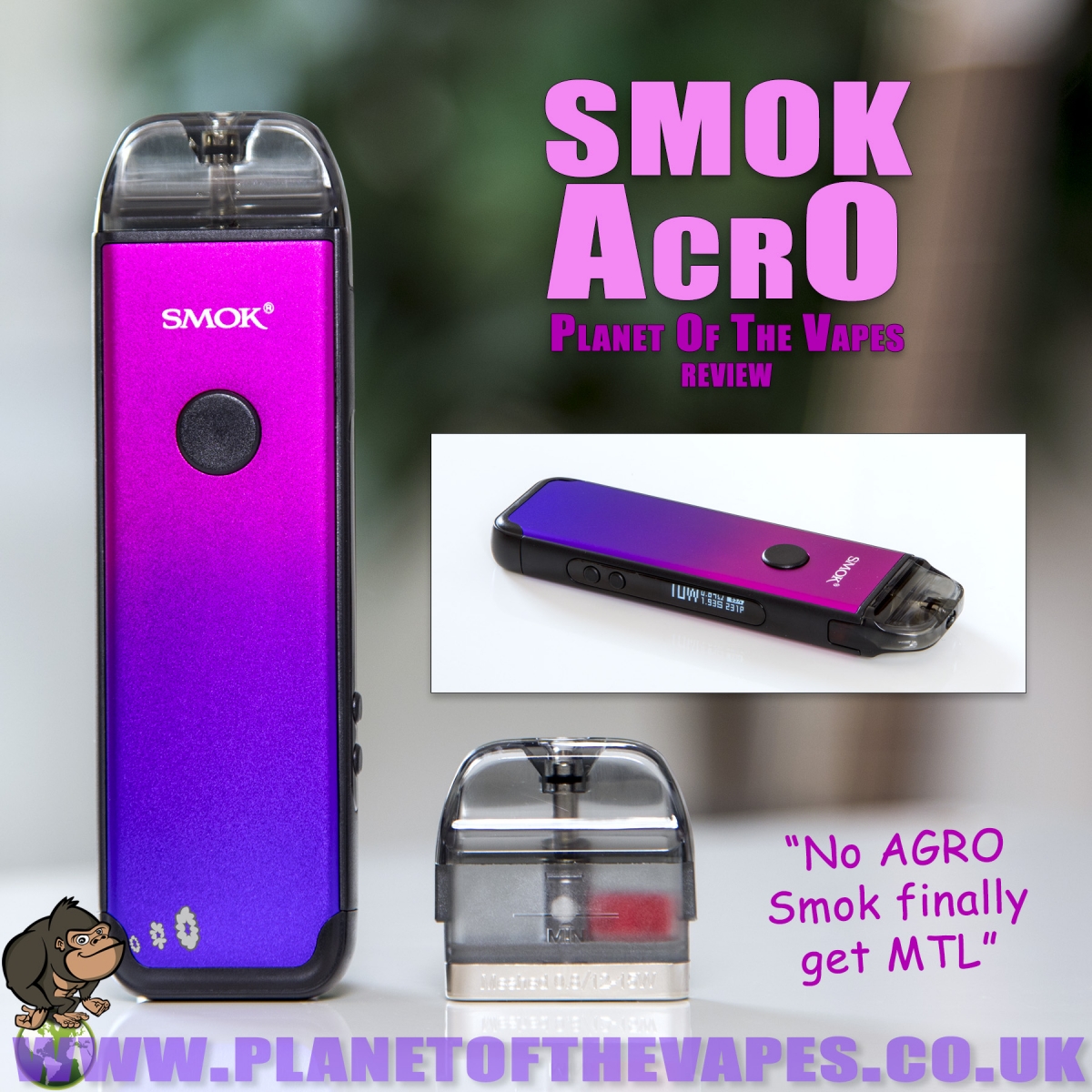 Just when I had given up on Smok for MTL devices along comes the ACRO Pod kit to change my mind. Not only have they got the airflow sussed, they have packed a screen and variable wattage into a pocket friendly lightweight pod kit.

It ticks all the boxes for me for a pod device. If I was to list the features I would want in a lightweight pod device, the Acro pretty much meets everything I could think of.

Specs wise, there’s not much to comment on apart from the size and weight, 48g makes it one of the lightest pods in my arsenal, and the width of 11.2mm is remarkable considering it accommodates a 0.69-inch OLED screen. The charging current is only 0.85A but I wouldn’t really want higher in a plastic body device, and it still doesn’t take too long to charge.

Mine was a sample and there was no box or manual so I will have to skip that part and get stuck into the first impressions….

The Acro might look simplistic but Smok have produced something quite special with this design, it would be impressive enough without the screen as it has a 1000mAh battery and can go up to 25 Watts.

The size isn’t the smallest I’ve tried but it’s certainly one of the thinnest of any screen device I have seen, and it’s very lightweight with its aluminium panels, plastic body and LiPo battery.

The front side has a fire button and the Smok logo, the finish is silky smooth.

On the back-side is a very welcome and effective airflow adjustment valve. The CE info is a little unsightly but with the device being so small, Smok left themselves with nowhere else to put it. The gradient colour is nicely done and gives an otherwise bland design a bit of style.

The USB-C port is located at the base. The pod will not stand upright due to it being rounded off around the base (trust me I tried and tried during the photography) so it has a wobbly-bottom.

One edge is blank and the opposite edge features the screen and adjustment buttons. 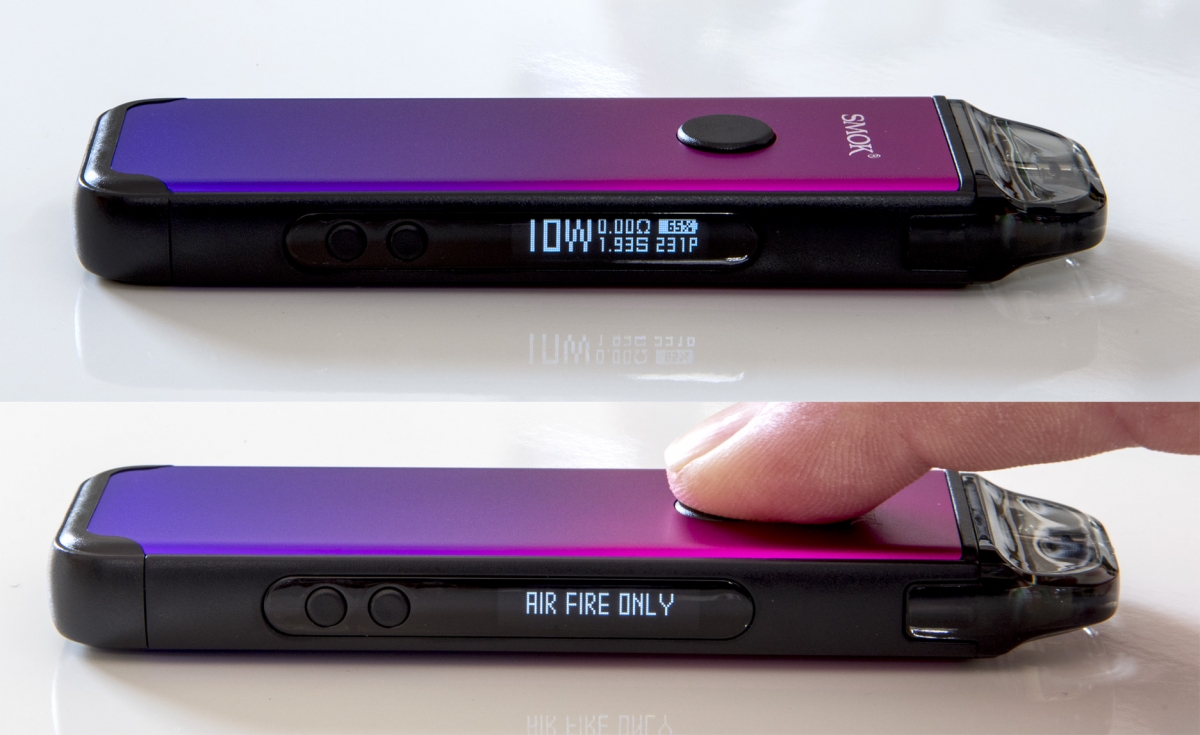 There’s no menu and only a couple of functions other than the adjustable wattage:

That’s it control wise, turning the device off also resets the puff counter. I really like the ‘Air Fire Only’ option as it makes it ideal as a pocket vape without accidentally hitting the fire button.

Naturally the 0.69” screen was going to be hard to read the finer details such as the Ohms and puff counter, this didn’t really bother me as you don’t really look at it once in use, but it was the battery status indicator that was useless to my older eyes. I had no chance of reading it without reading glasses. 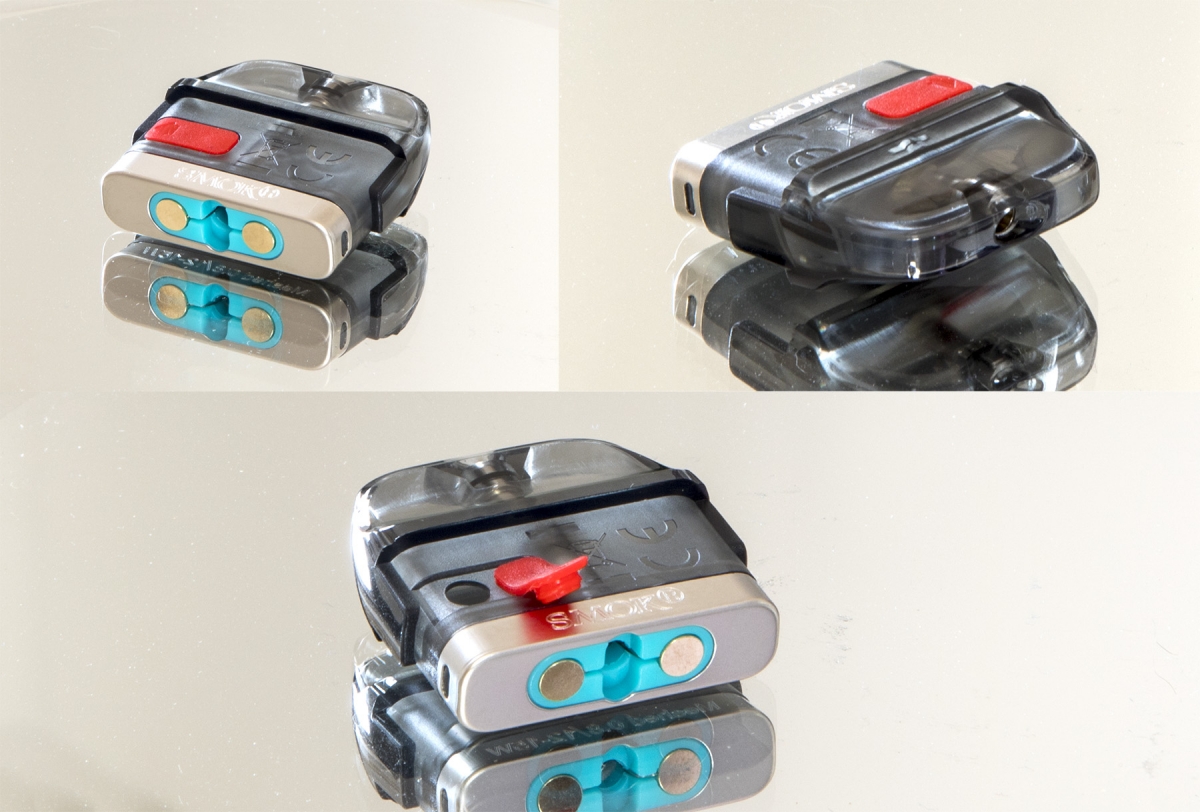 The pod is fairly standard but it is obvious that Smok have declared this device to be a proper MTL one, the narrow chimney inside the pod and the skinny ducks arse…. I mean bill! mouthpiece is just right.

The filling bung is slightly awkward to use and it got a bit messy the first time I tried to fill it, but I soon got used to it. It feels a little flimsy but since the pod is disposable, I had no issues with it breaking off in usage.

Talking of disposable, though not ideal I don’t feel that the waste is as bad as I have seen on other pods. I was able to break off the metal inner parts easily which makes it recyclable. The metal part is not worth recycling as there’s very little of it.

The pod fits into the battery perfectly, nice and tight, yet is still easy to remove and fit. There seems to be a proper seal which should make the airflow control more efficient.

I honestly expected the Acro to be a typical Smok loose draw but how wrong was I? It was bloody superb, a proper tight MTL draw. To my surprise, it was even a touch too tight for me when closed off so I opened up the airflow a touch to suit my tastes. Talking of tastes, the flavour was pretty good, possibly not the best out there but certainly a good balance for MTL. The 0.8Ω mesh coil is rated between 12-15 watts but I found it worked damn well at just 11 watts, 12 watts was plenty warm enough for me.

I was just so impressed with the MTL draw and really enjoyed using the Acro, it fits nicely into my jeans coin pocket or shirt pocket, it also went well on a lanyard as the weight was ideal for one. The auto-draw performed flawlessly and I found no use for the fire button so I turned that off. There was no issues at all with leaking or condensation which impressed me.

The ‘Juice Viewing Window’ was a bit pants as it’s so reflective due to it being curved. However the exposed part of the pod was clear enough to see the level when tipped onto the side so this wasn’t an issue.

My one and only issue with it was that the coil in the pod was such a tight fit that I had airlock issues when filling it up and during use, more often than not I would have uneven juice levels in either side and that was using 50/50 eliquid, I definitely wouldn’t try any thicker juices.

Battery life was pretty impressive for a screen device, it lasted me most of a full day despite hammering it with 5mg nic salts. With my usual 20mg it lasted me over a day, charging took around an hour from low.

How does it stack up to the competition?

I have only compared it to some of my recent favourites, the Vaporesso Luxe Q and the Joyetech Evio C. The Smok was clearly the thinnest despite it having a screen, it was also the lightest. Vape wise, it was somewhere in the middle but the airflow was the tightest out of the three. 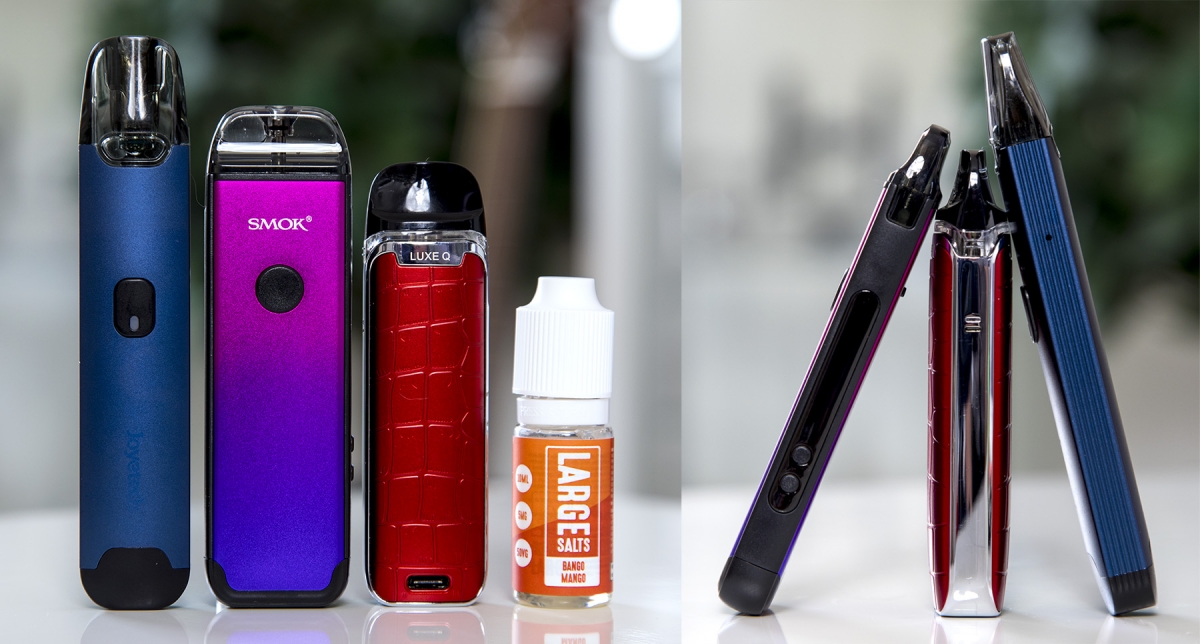 Style wise, I much prefer the Luxe Q but the weight of the Acro made it a firm favourite for my pocket, and the tighter airflow meant I preferred it over the Evio C even though the flavour wasn’t quite as good.

Smok have finally met my fussy MTL needs with the Acro, I have always enjoyed Smok stuff for DL vaping but this is the first MTL device from them that I have very few cons with. The Nord was my first MTL disappointment as the airflow was dreadful, the N19 looked like it would be great for MTL but the huge drip tip spoilt that, I tried the sloppy Nord 2 and that just put me right off Smok where MTL is concerned, but Smok are back in my good books with the Acro.

The Acro is one of those devices I would recommend to smokers looking to quit and for experienced vapers looking for a lightweight pocket pod. Now that Smok have found their MTL mojo, I am looking forward to seeing if they come up with other MTL devices, perhaps I missed some along the way but I have been checking other reviews and loose airflow was always recurring. Not now though – nice one Smok.

As you can see, I don’t really have any other cons (apart from my age related sight). I hate the colour but that’s my fault (I wasn’t expecting to like it and intended to give it away so I said “any colour”). It appears that Smok have finally listened to MTL users and I am very happy with the Acro’s performance, it is one I will be buying replacement pods for.